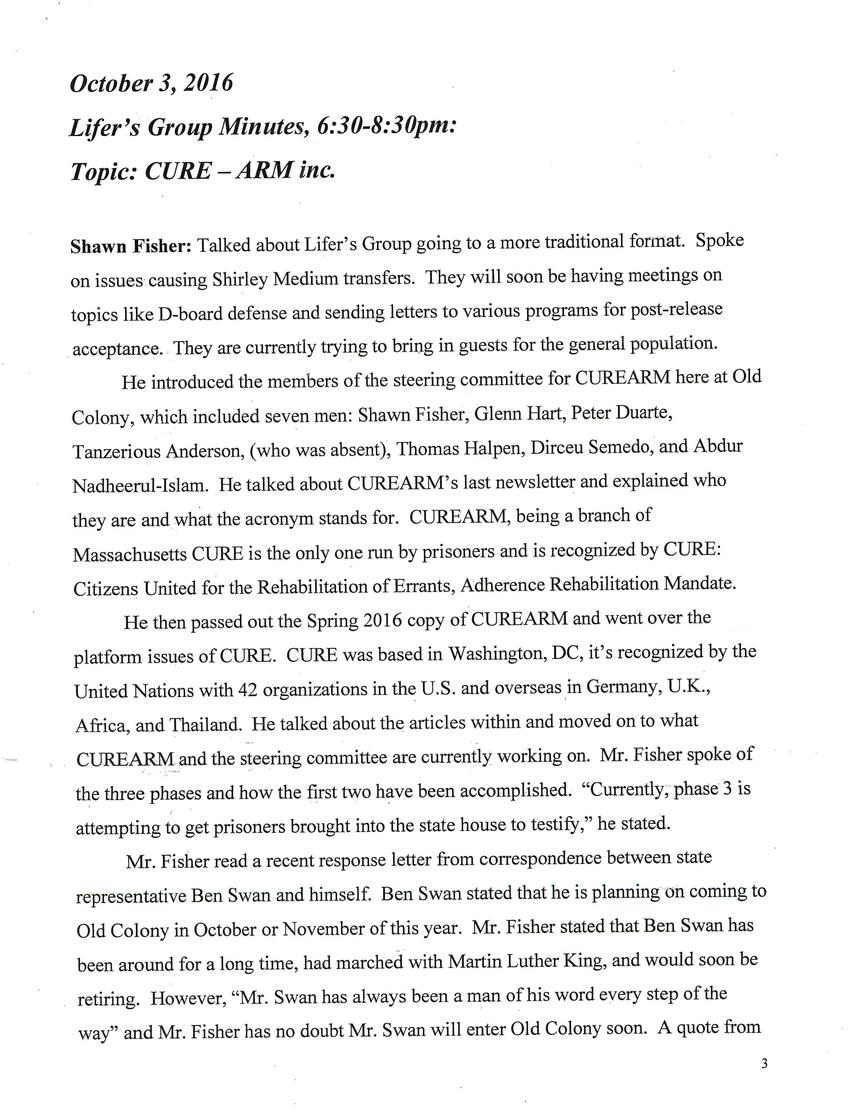 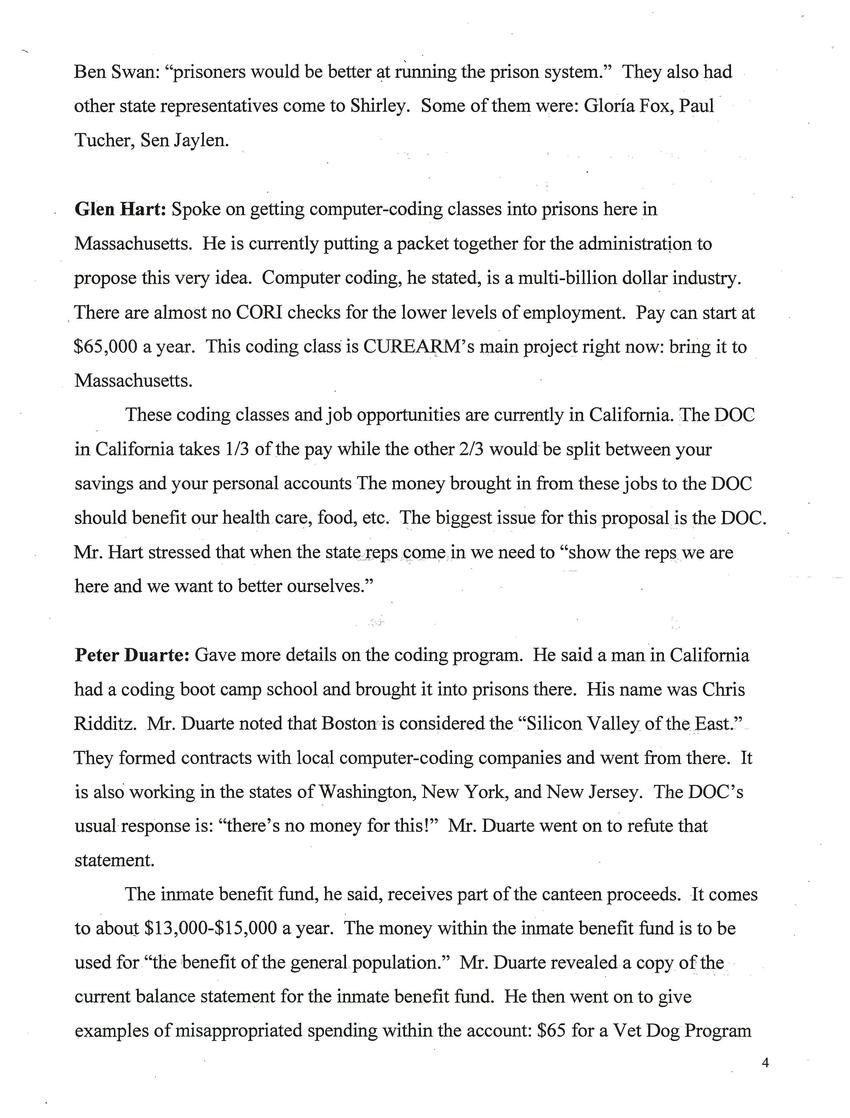 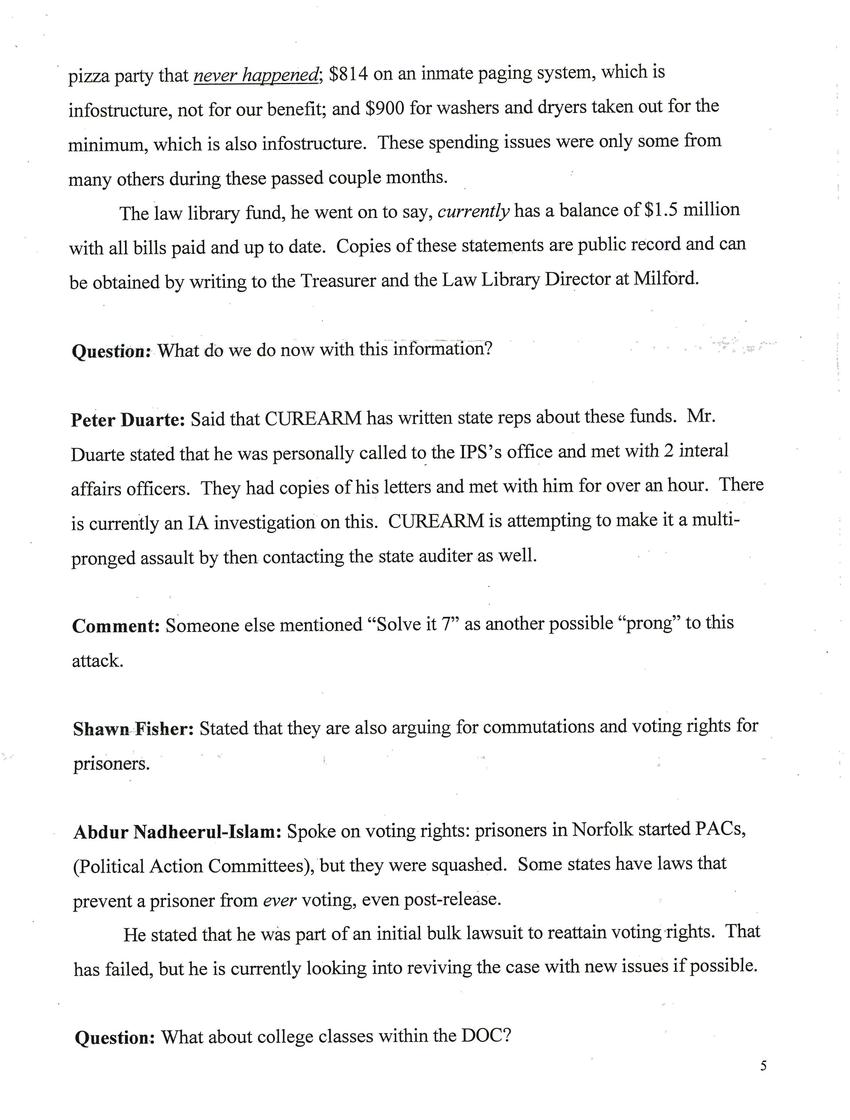 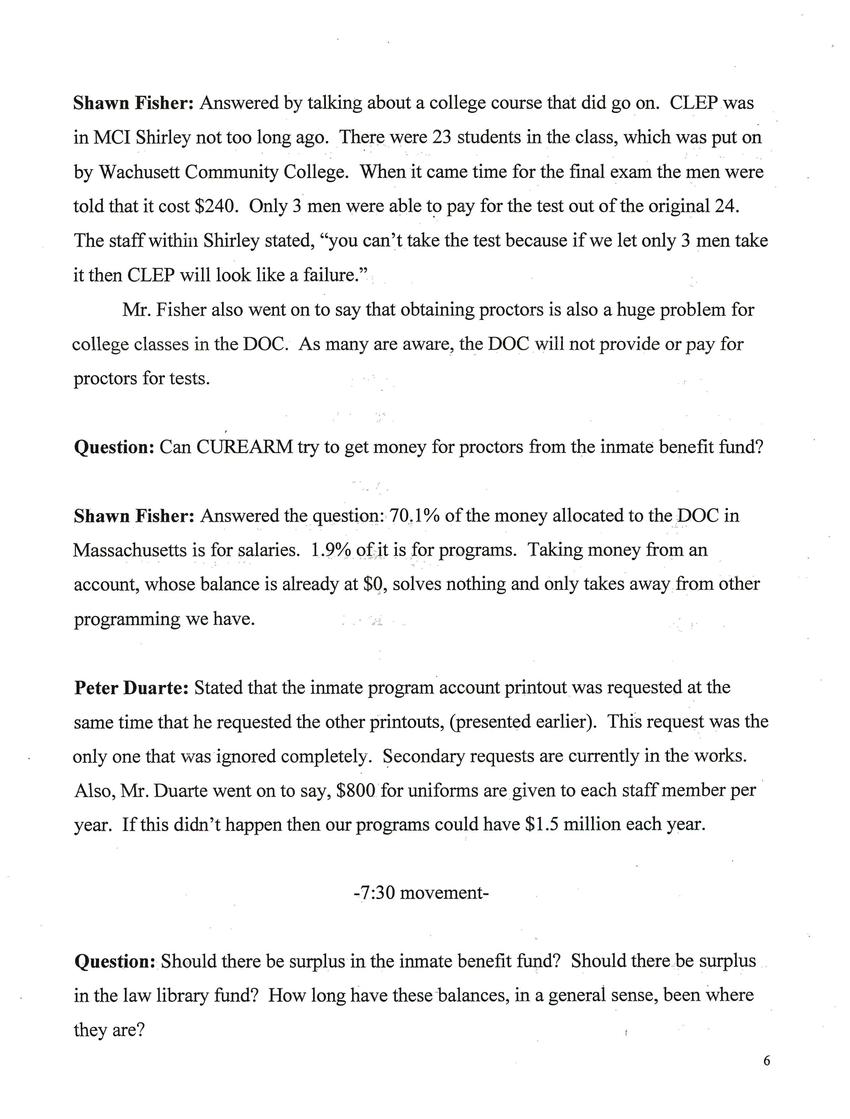 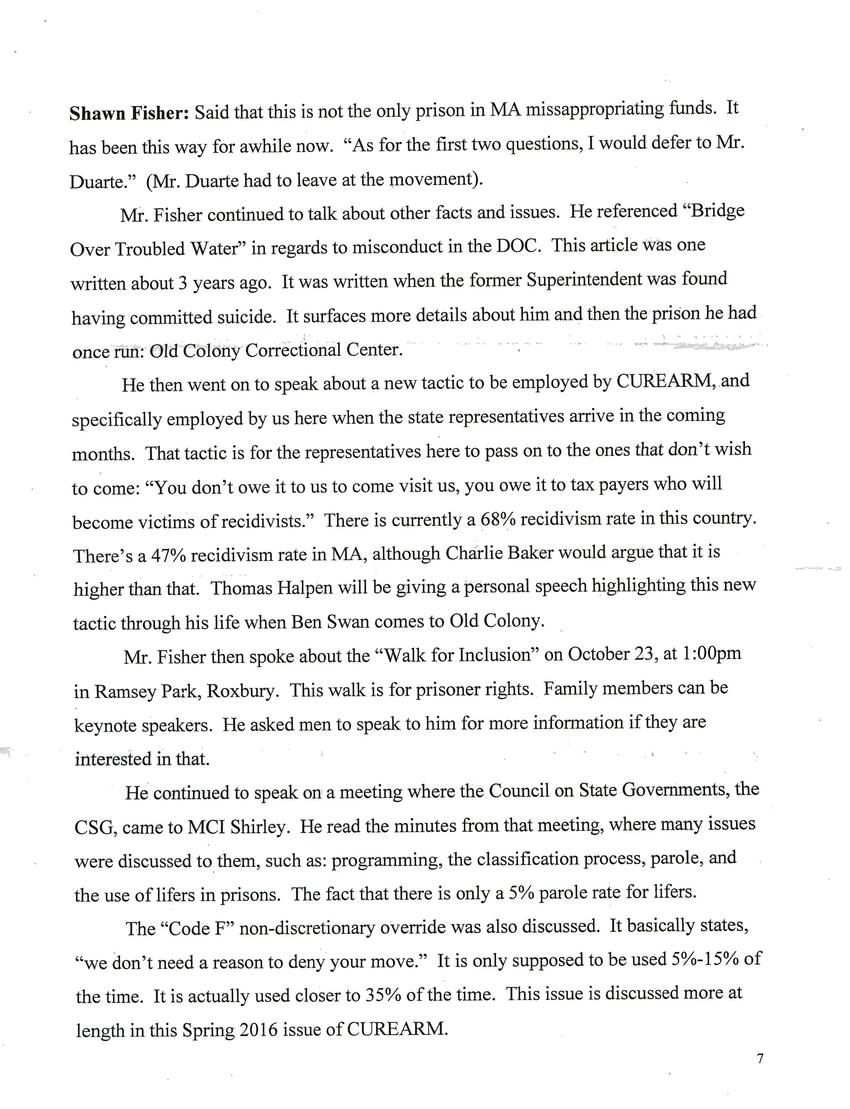 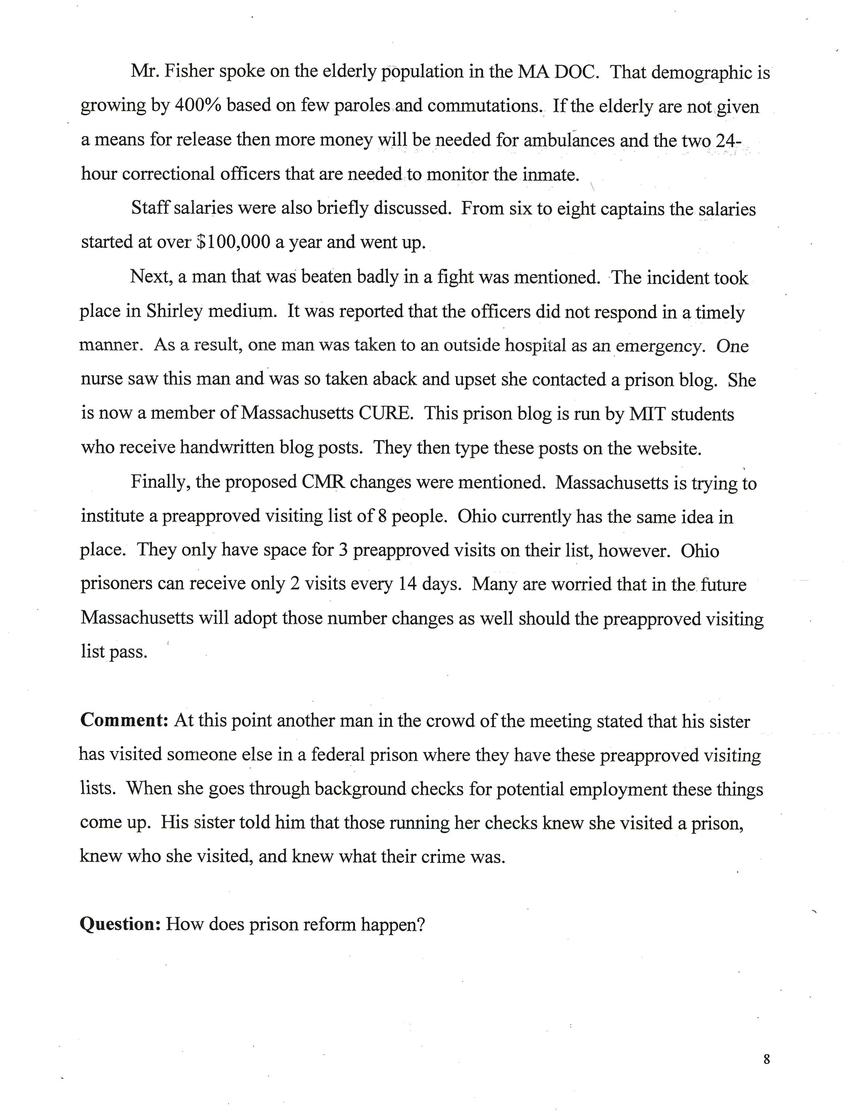 Shawn Fisher: Talked about Lifer's Group going to a more traditional format. Spoke on issues causing Shirley Medium transfers. They will soon be having meetings on topics like D-board defense and sending letters to various programs for post-release acceptance. They are currently trying to bring in guests for the general population.
He introduced the members of the steering committee for CUREARM here at Old Colony, which included seven men: Shawn Fisher, Glenn Hart, Peter Duarte, Tanzerious Anderson, (who was absent), Thomas Halpen, Dirceu Semedo, and Abdur Nadheerul-Islam. He talked about CUREARM's last newsletter and explained who they are and what the acronym stands for. CUREARM, being a branch of Massachusetts CURE is the only one run by prisoners and is recognized by CURE: Citizens United for the Rehabilitation of Errants, Adherence Rehabilitation Mandate.
He then passed out the Spring 2016 copy of CUREARM and went over the platform issues of CURE. CURE was based in Washington, DC, it's recognized by the United Nations with 42 organizations in the U.S. and overseas in Germany, U.K., Africa, and Thailand. He talked about the articles within and moved on to what CUREARM and the steering committee are currently working on. Mr. Fisher spoke of the three phases and how the first two have been accomplished. "Currently, phase 3 is attempting to get prisoners brought into the state house to testify," he stated.
Mr. Fisher read a recent response letter from correspondence between state representative Ben Swan and himself. Ben Swan stated that he is planning on coming to Old Colony in October or November of this year. Mr. Fisher stated that Ben Swan has been around for a long time, had marched with Martin Luther King, and would soon be retiring. However, "Mr. Swan has always been a man of his word every step of the way" and Mr. Fisher has no doubt Mr. Swan will enter Old Colony soon. A quote from Ben Swan: "prisoners would be better at running the prison system." They also had other state representatives come to Shirley. Some of them were: Gloria Fox, Paul Tucher, Sen Jaylen.

Glen Hart: Spoke on getting computer-coding classes into prisons here in Massachusetts. He is currently putting a packet together for the administration to propose this very idea. Computer coding, he stated, is a multi-billion dollar industry. There are almost no CORI checks for the lower levels of employment. Pay can start at $65,000 a year. This coding class is CUREARM's main project right now: bring it to Massachusetts.
These coding classes and job opportunities are currently in California. The DOC in California takes 1/3 of the pay while the other 2/3 would be split between your savings and your personal accounts. The money brought in from these jobs to the DOC should benefit our health care, food, etc. The biggest issue for this proposal is the DOC. Mr. Hart stressed that when the state reps come in we need to "show the reps we are here and we want to better ourselves."

Peter Duarte: Gave more details on the coding program. He said a man in California had a coding boot camp school and brought it into prisons there. His name was Chris Ridditz. Mr. Duarte noted that Boston is considered the "Silicon Valley of the East." They formed contracts with local computer-coding companies and went from there. It is also working in the states of Washington, New York, and New Jersey. The DOC's usual response is: "there's no money for this!" Mr. Duarte went on to refuse that statement.
The inmate benefit fund, he said, receives part of the canteen proceeds. It comes to about $13,000-$15,000 a year. The money within the inmate benefit fund is to be used for "the benefit of the general population." Mr. Duarte revealed a copy of the current balance statement for the inmate benefit fund. He then went on to give examples of misappropriated spending within the account: $65 for a Vet Dog Program pizza party that never happened; $814 on an inmate paging system, which is infostructure, not for our benefit; and $900 for washers and dryers taken out for the minimum, which is also infostructure. These spending issues were only some from many others during these passed couple months.
The law library, he went on to say, currently has a balance of $1.5 million with all bills paid and up to date. Copies of these statements are public record and can be obtained by writing to the Treasurer and the Law Library Director at Milford.

Question: What do we do now with this information?

Peter Duarte: Said that CUREARM has written state reps about these funds. Mr. Duarte stated that he was personally called to the IPS's office and met with 2 internal affairs officers. They had copies of his letters and met with him for over an hour. There is currently an IA investigation on this. CUREARM is attempting to make it a multi-pronged assault by then contacting the state auditor as well.

Comment: Someone else mentioned "Solve it 7" as another possible "prong" to this attack.

Shawn Fisher: Stated that they are also arguing for commutations and voting rights for prisoners.

Abdur Nadheerul-Islam: Spoke on voting rights: prisoners in Norfolk started PACs, (Political Action Committees), but they were squashed. Some states have laws that prevent a prisoner from ever voting, even post-release.
He stated that he was part of an initial bulk lawsuit to reattain voting rights. That has failed, but he is currently looking into reviving the case with new issues if possible.

Question: What about college classes within the DOC?

Shawn Fisher: Answered by talking about a college course that did go on. CLEP was in MCI Shirley not too long ago. There were 23 students in the class, which was put on by Wachusett Community College. When it came time for the final exam the men were told that it cost $240. Only 3 men were able to pay for the test out of the original 24. The staff within Shirley stated, "you can't take the test because if we let only 3 men take it then CLEP will look like a failure."
Mr. Fisher also went on to say that obtaining proctors is also a huge problem for college classes in the DOC. As many are aware, the DOC will not provide or pay for proctors for tests.

Question: Can CUREARM try to get money for proctors from the inmate benefit fund?

Shawn Fisher: Answered the question: 70.1% of the money allocated to the DOC in Massachusetts is for salaries. 1.9% of it is for programs. Taking money from an account, whose balance is already at $0, solves nothing and only takes away from other programming we have.

Peter Duarte: States that the inmate program account printout was requested at the same time that he requested the other printouts, (presented earlier). This request was the only one that was ignored completely. Secondary requests are currently in the works. Also, Mr. Duarte went on to say, $800 for uniforms are given to each staff member per year. If this didn't happen then our programs could have $1.5 million each year.

Shawn Fisher: Said that this is not the only prison in MA misappropriating funds. It has been this way for awhile now. "As for the first two questions, I would defer to Mr. Duarte." (Mr. Duarte has to leave at the movement).
Mr. Fisher continued to talk about other facts and issues. He referenced "Bridge Over Troubled Water" in regards to misconduct in the DOC. This article was one written about 3 years ago. It was written when the former Superintendent was found having committed suicide. It surfaces more details about him and then the prison he had once run: Old Colony Correctional Center.
He then went on to speak about a new tactic to be employed by CUREARM, and specifically employed by us here when the state representatives arrive in the coming months. That tactic is for the representatives here to pass on to the ones that don't wish to come: "You don't owe it to us to come visit us, you owe it to tax payers who will become victims of recidivists." There is currently a 68% recidivism rate in this country. There's a 47% recidivism rate in MA, although Charlie Baker would argue that it is higher than that. Thomas Halpen will be giving a personal speech highlighting this new tactic through his life when Ben Swan comes to Old Colony. 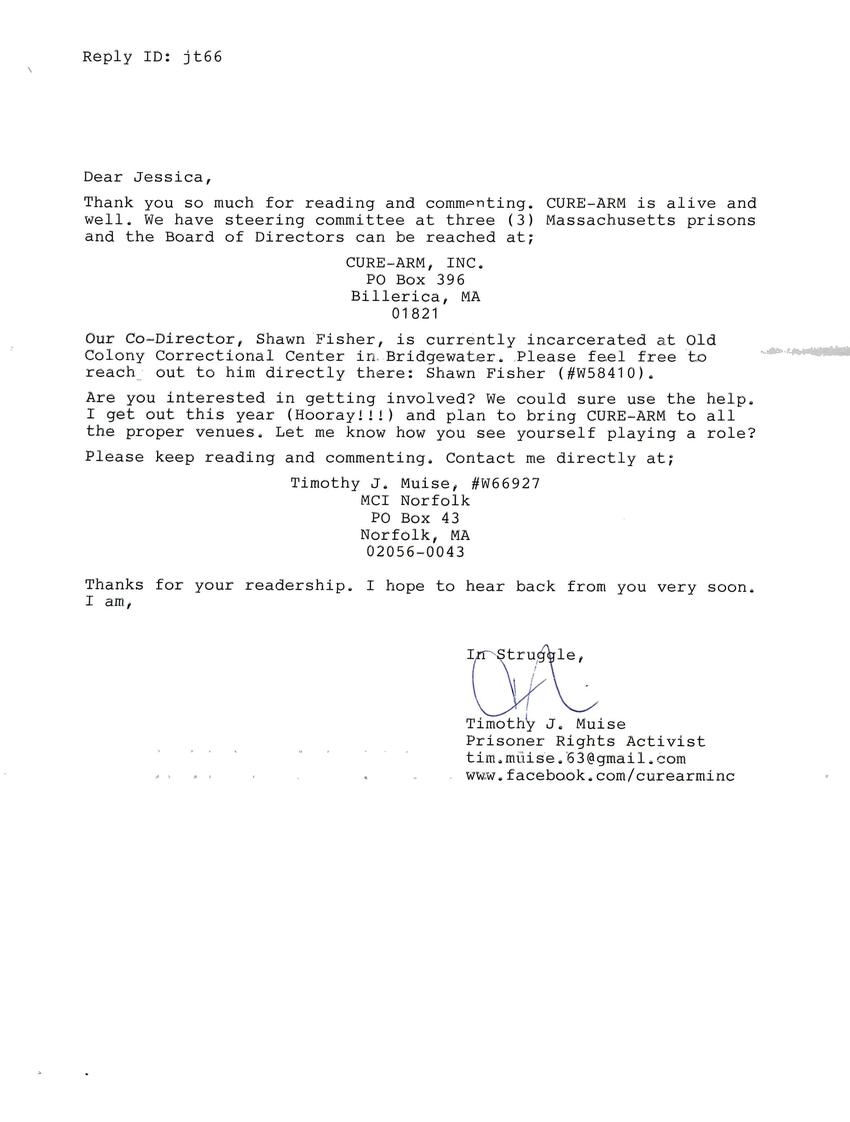