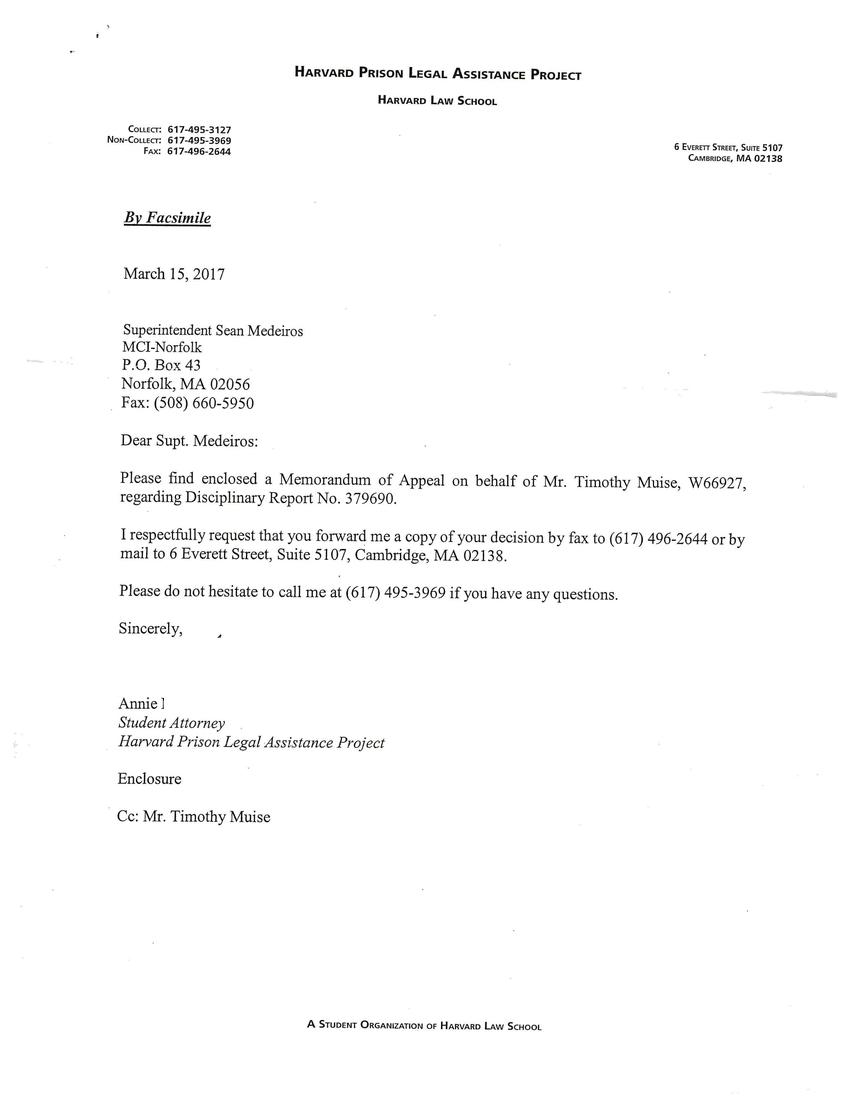 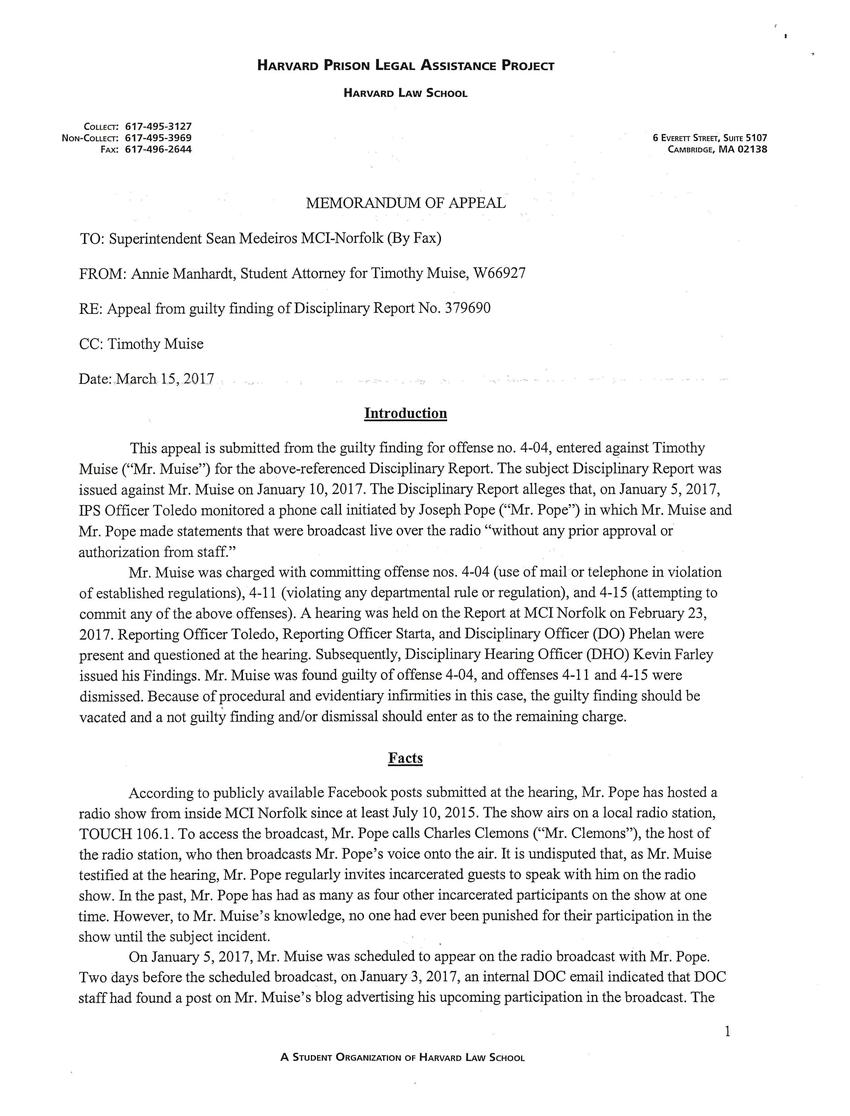 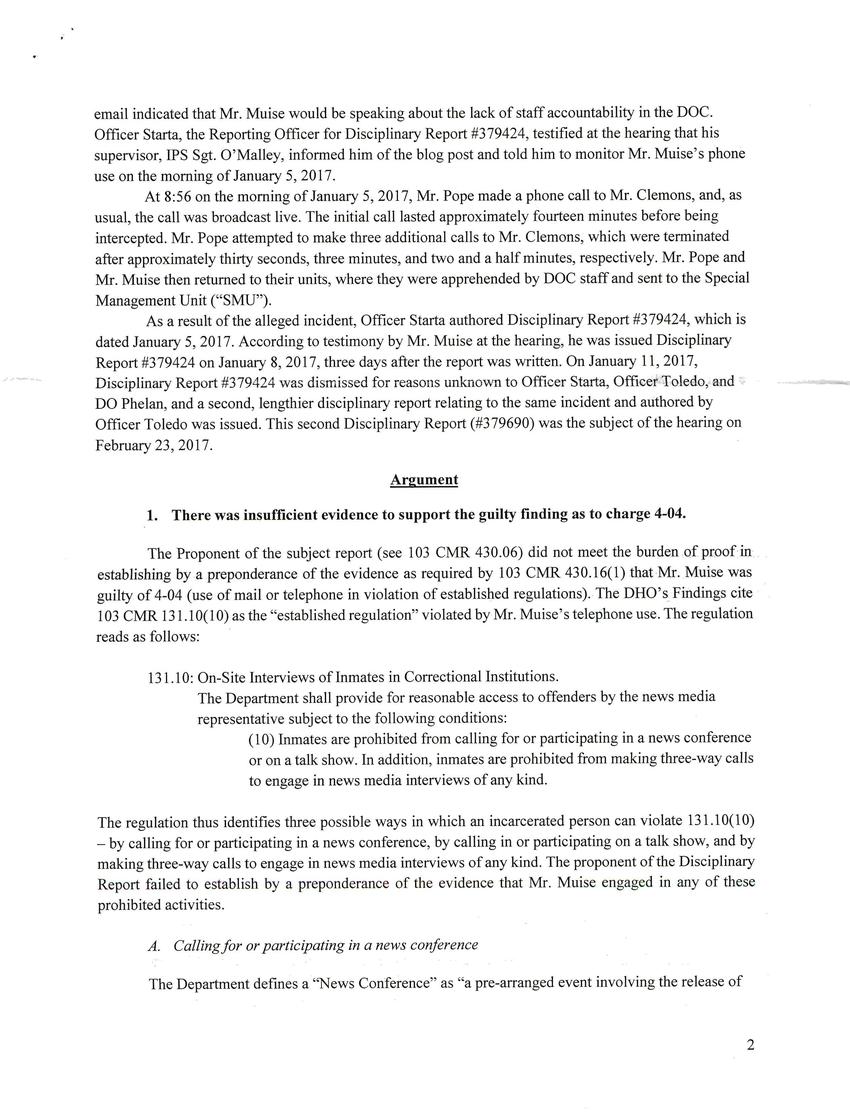 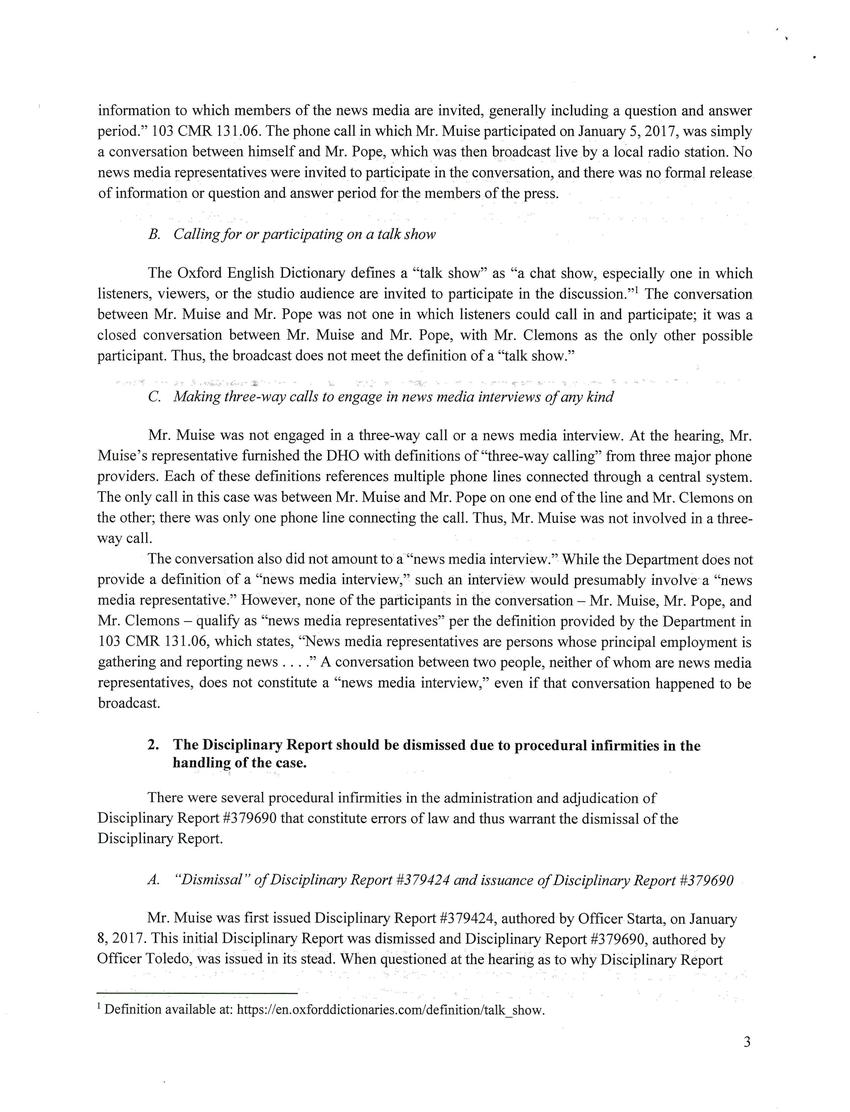 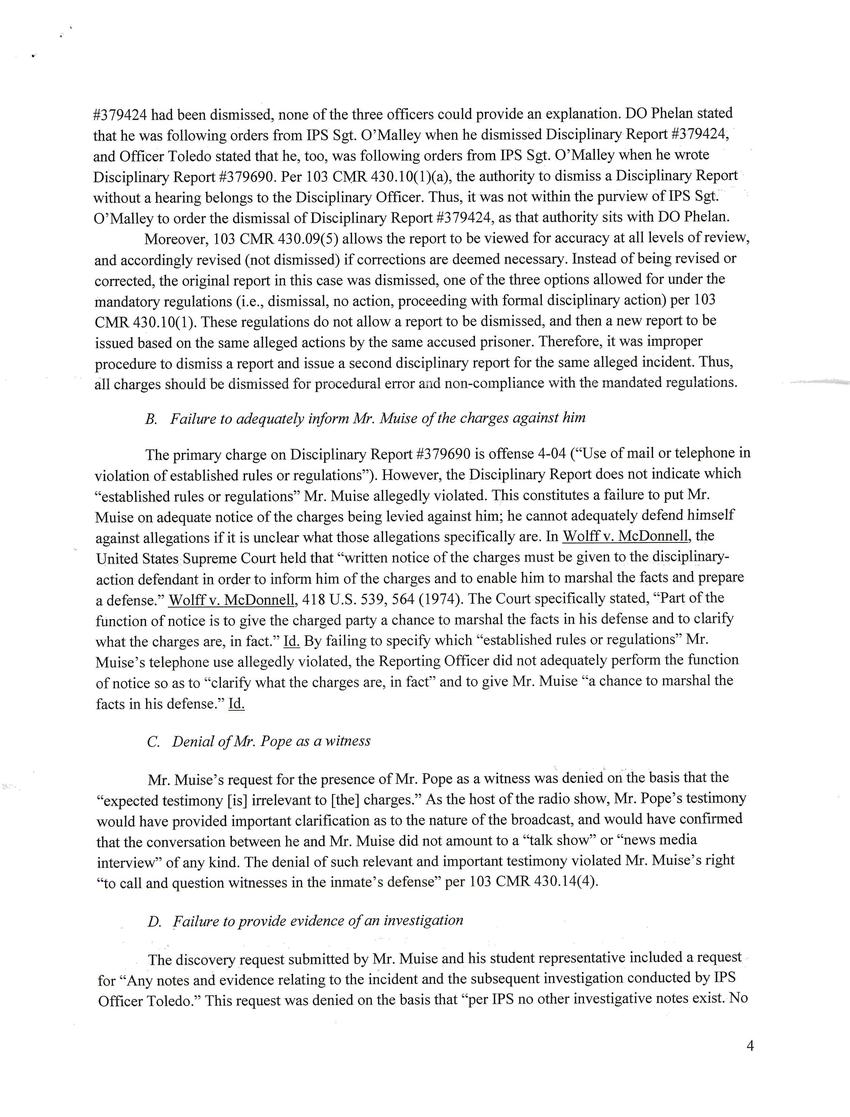 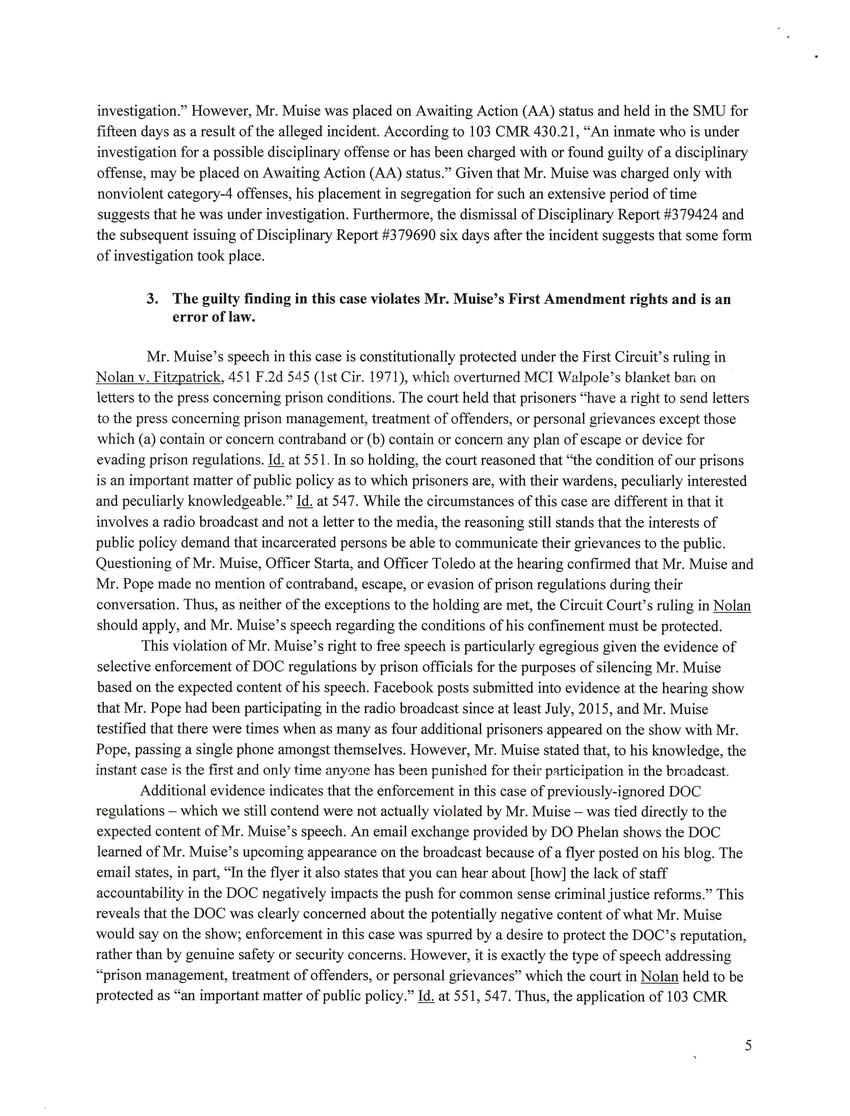 Please find enclosed a Memorandum of Appeal on behalf of Mr. Timothy Muise, W66927, regarding Disciplinary Report No. 379690.

RE: Appeal from guilty finding of Disciplinary Report No. 379690

This appeal is submitted from the guilty finding for offense no. 4-04, entered against Timothy Muise ("Mr. Muise") for the above-referenced Disciplinary Report. The subject Disciplinary Report was issued against Mr. Muise on January 10, 2017. The Disciplinary Report alleges that, on January 5, 2017, IPS Officer Toledo monitored a phone call initiated by Joseph Pope ("Mr. Pope") in which Mr. Muise and Mr. Pope made statements that were broadcast live over the radio "without any prior approval or authorization from staff."

Mr. Muise was charged with committing offense nos. 4-04 (use of mail or telephone in violation of established regulations), 4-11 (violating any departmental rule or regulation), and 4-15 (attempting to commit any of the above offenses). A hearing was held on the Report at MCI Norfolk on February 23, 2017. Reporting Officer Toledo, Reporting Officer Starta, and Disciplinary Officer (DO) Phelan were present and questioned at the hearing. Subsequently, Disciplinary Hearing Officer (DHO) Kevin Farley issued his Findings. Mr. Muise was found guilty of offense 4-04, and offenses 4-11 and 4-15 were dismissed. Because of procedural and evidentiary infirmities in this case, the guilty finding should be vacated and a not guilty finding and/or dismissal should enter as to the remaining charge.

According to publicly available Facebook posts submitted at the hearing, Mr. Pope has hosted a radio show from inside MCI Norfolk since at least July 10, 2015. The show airs on a local radio station, TOUCH 106.1. To access the broadcast, Mr. Pope calls Charles Clemons ("Mr. Clemons"), the host of the radio station, who then broadcasts Mr. Pope's voice onto the air. It is undisputed that, as Mr. Muise testified at the hearing, Mr. Pope regularly invited incarcerated guests to speak with him on the radio show. In the past, Mr. Pope has had as many as four other incarcerated participants on the show at one time. However, to Mr. Muise's knowledge, no one had ever been punished for their participation in the show until the subject incident.

On January 5, 2017, Mr. Muise was scheduled to appear on the radio broadcast with Mr. Pope. Two days before the scheduled broadcast, on January 3, 2017, an internal DOC email indicated that DOC staff has found a post on Mr. Muise's blog advertising his upcoming participation in the broadcast. The email indicated that Mr. Muise would be speaking about the lack of staff accountability in the DOC. Officer Starta, the Reporting Officer for Disciplinary Report #379424, testified at the hearing that his supervisor, IPS Sgt. O'Malley, informed him of the blog post and told him to monitor Mr. Muise's phone use on the morning of January 5, 2017.

At 8:56 on the morning of January 5, 2017, Mr. Pope made a phone call to Mr. Clemons, and, as usual, the call was broadcast live. The initial call lasted approximately fourteen minutes before being intercepted. Mr. Pope attempted to make three additional calls to Mr. Clemons, which were terminated after approximately thirty seconds, three minutes, and two and a half minutes, respectively. Mr. Pope and Mr. Muise then returned to their units, where they were apprehended by DOC staff and sent to the Special Management Unit ("SMU").

1. There was insufficient evidence to support the guilty finding as to charge 4-04.

The Proponent of the subject report (see 103 CMR 430.06) did not meet the burden of proof in establishing by a preponderance of the evidence as required by 103 CMR 430.16(1) that Mr. Muise was guilty of 4-04 (use of mail or telephone in violation of established regulations). The DHO's Findings cite 103 CMR 131.10(10) as the "established regulation" violated by Mr. Muise's telephone use. The regulation reads as follows:

131.10: On-Site Interviews of Inmates in Correctional Institutions.
The Department shall provide for reasonable access to offenders by the news media representative subject to the following conditions:
(10) Inmates are prohibited from calling for or participating in a news conference or on a talk show. In addition, inmates are prohibited from making three-way calls to engage in news media interviews of any kind.

The regulation thus identifies three possible ways in which an incarcerated person can violate 131.10(10) - by calling for or participating in a news conference, by calling in or participating on a talk show, and by making three-way calls to engage in news media interviews of any kind. The proponent of the Disciplinary Report failed to establish by a preponderance of the evidence that Mr. Muise engaged in any of these prohibited activities.

A. Calling for or participating in a news conference

The Department defines a "News Conference" as "a pre-arranged event involving the release of information to which members of the news media are invited, generally including a question and answer period." 103 CMR 131.06. The phone call in which Mr. Muise participated on January 5, 2017, was simply a conversation between himself and Mr. Pope, which was then broadcast live by a local radio station. No news media representatives were invited to participate in the conversation, and there was no formal release of information or question and answer period for the members of the press.

B. Calling for or participating on a talk show

The Oxford English Dictionary defines a "talk show" as "a chat show, especially one in which listeners, viewers, or the studio audience are invited to participate in the discussion."[1] The conversation between Mr. Muise and Mr. Pope was not one in which listeners could call in and participate; it was a closed conversation between Mr. Muise and Mr. Pope, with Mr. Clemons as the only other possible participant. Thus, the broadcast does not meet the definition of a "talk show."

C. Making three-way calls to engage in news media interviews of any kind

2. The Disciplinary Report should be dismissed due to procedural infirmities in the handling of the case.

There were several procedural infirmities in the administration and adjudication of Disciplinary report #379690 that constitute errors of law and thus warrant the dismissal of the Disciplinary Report.

B. Failure to adequately inform Mr. Muise of the charges against him

C. Denial of Mr. Pope as a witness

Mr. Muise's request for the presence of Mr. Pope as a witness was denied on the basis that the "expected testimony [is] irrelevant to [the] charges." As the host of the radio show, Mr. Pope's testimony would have provided important clarification as to the nature of the broadcast, and would have confirmed that the conversation between he and Mr. Muise did not amount to a "talk show" or "news media interview" of any kind. The denial of such relevant and important testimony violated Mr. Muise's right "to call and question witnesses in the inmate's defense" per 103 CMR 430.14(4).

D. Failure to provide evidence of an investigation

The discovery request submitted by Mr. Muise and his student representative included a request for "Any notes and evidence relating to the incident and the subsequent investigation conducted by IPS Officer Toledo." This request was denied on the basis that "per IPS no other investigative notes exist. No investigation." However, Mr. Muise was placed on Awaiting Action (AA) status and held in the SMU for fifteen days as a result of the alleged incident. According to 103 CMR 430.21, "An inmate who is under investigation for a possible disciplinary offense or has been charged with or found guilty of a disciplinary offense, may be placed on Awaiting Action (AA) status." Given that Mr. Muise was charged only with nonviolent category-4 offenses, his placement in segregation for such an extensive period of time suggests that he was under investigation. Furthermore, the dismissal of Disciplinary Report #379424 and the subsequent issuing of Disciplinary Report #379690 six days after the incident suggests that some form of investigation took place.

3. The guilty finding in this case violates Mr. Muise's First Amendment rights and is an error of law.

Mr. Muise's speech in this case is constitutionally protected under the First Circuit's ruling in Nolan v. Fitzpatrick, 451 F.2d 545 (1st Cir. 1971), which overturned MCI Walpole's blanket ban on letters to the press concerning prison conditions. The court held that prisoners "have a right to send letters to the press concerning prison conditions. The court held that prisoners "have a right to send letters to the press concerning prison management, treatment of offenders, or personal grievances except those which (a) contain or concern contraband or (b) contain or concern any plan of escape or device for evading prison regulations. Id. at 551. In so holding, the court reasoned that "the condition of our prisons is an important matter of public policy as to which prisoners are, with their wardens, peculiarly interested and peculiarly knowledgeable." Id. at 547. While the circumstances of this case are different in that it involves a radio broadcast and not a letter to the media, the reasoning still stands that the interests of public policy demand that incarcerated persons be able to communicate their grievances to the public. Questioning of Mr. Muise, Officer Starta, and Officer Toledo at the hearing confirmed that Mr. Muise and Mr. Pope made no mention of contraband, escape, or evasion of prison regulations during their conversation. Thus, as neither of the exceptions to the holding are met, the Circuit Court's ruling in Nolan should apply, and Mr. Muise's speech regarding the conditions of his confinement must be protected.
This violation of Mr. Muise's right to free speech is particularly egregious given the evidence of selective enforcement of DOC regulations by prison officials for the purposes of silencing Mr. Muise based on the expected content of his speech. Facebook posts submitted into evidence at the hearing show that Mr. Pope had been participating in the radio broadcast since at least July, 2015, and Mr. Muise testified that there were times when as many as four additional prisoners appeared on the show with Mr. Pope, passing a single phone amongst themselves. However, Mr. Muise stated that, to his knowledge, the instant case is the first and only time anyone has been punished for their participation in the broadcast.
Additional evidence indicates that the enforcement in this case of previously-ignored DOC regulation - which we still contend were not actually violated by Mr. Muise - was tied directly to the expected content of Mr. Muise's speech. An email exchange provided by DO Phelan shows the DOC learned of Mr. Muise's upcoming appearance on the broadcast because of a flyer posted on his blog. The email states, in part, "In the flyer it also states that you can hear about [how] the lack of staff accountability in the DOC negatively impacts the push for common sense criminal justice reforms." This reveals that the DOC was clearly concerned about the potentially negative content of what Mr. Muise would say on the show; enforcement in this case was spurred by a desire to protect the DOC's reputation, rather than by genuine safety or security concerns. However, it is exactly the type of speech addressing "prison management, treatment of offenders, or personal grievances" which the court in Nolan held to be protected as "an important matter of public policy." Id. at 551, 547. Thus, the application of 103 CMR 131.10(1) via Offense 4-04 in this case violates Mr. Muise's First Amendment rights and is an error of law.

Based on the foregoing procedural infirmities and substantive errors of law, the guilty finding in this case should be vacated and the subject Disciplinary Report should be dismissed.

This Disciplinary Appeal is the next step towards taking the Department of Corruption and its officials here at MCI NorfolkWorld for chilling my free expression. We will keep you posted on the activity in the case.
Of course the department of corruption does not want prisoners criticizing their tactics, but that is just too bad. I have the constitutional right to do so and will exercise that right at every turn and on every chance I get. This is Free Speech Central!