Reply ✍ Transcribed
From a day in the life by Michael McThune (author's profile)
Share this:
uploaded April 29, 2017.  Original (PDF) 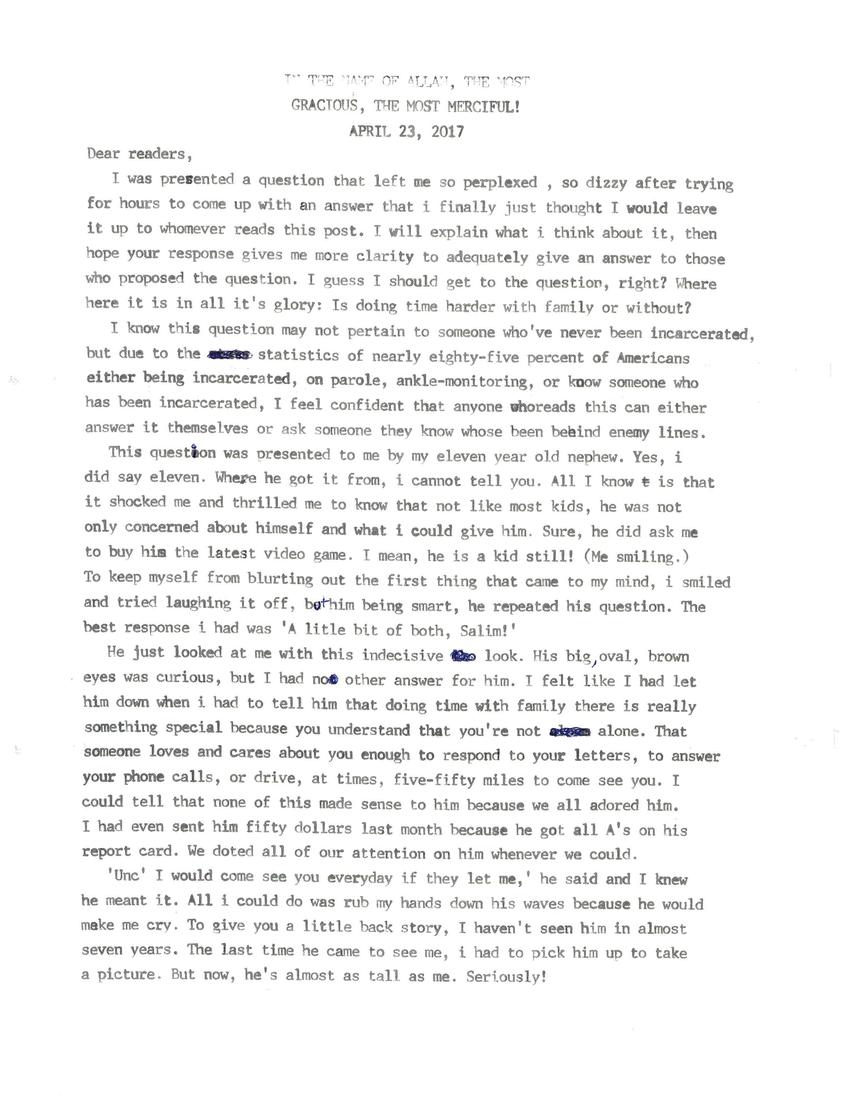 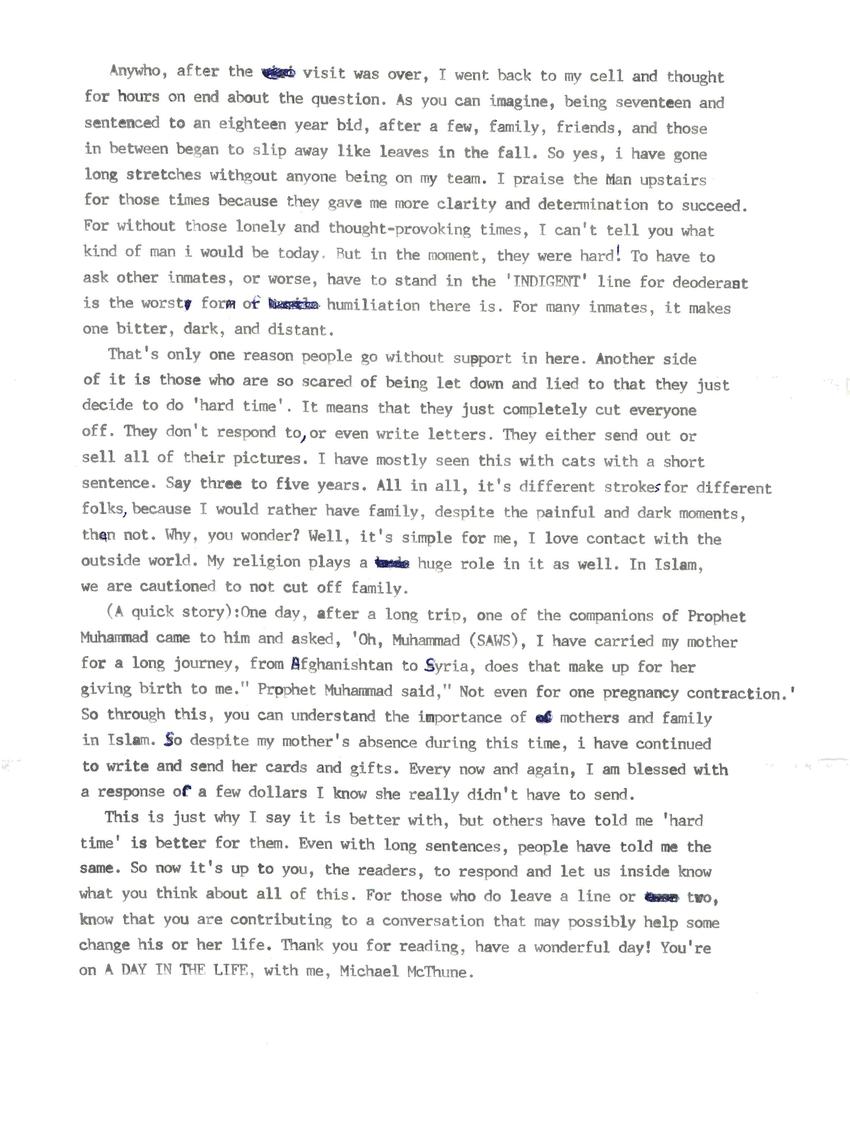 Dear readers,
I was presented a question that left me so perplexed, so dizzy after trying for hour to come up with an answer that I finally just thought I would leave it up to whomever reads this post. I will explain what I think about it, then hope your response gives me more clarity to adequately give an answer to those who proposed the question. I guess I should get to the question, right? Where here it is in all its glory: Is doing time harder with family or without?
I know this question may not pertain to someone who've never been incarcerated, but due to the statistics of nearly eighty-five percent of Americans either being incarcerated, on parole, ankle-monitoring, or know someone who has been incarcerated, I feel confident that anyone who reads this can either answer it themselves or ask someone they know who's been behind enemy lines.
This question was presented to me by my eleven year old nephew. Yes, I did say eleven. Where he got it from I cannot tell you. All I know is that it shocked me and thrilled me to know that not like most kids, he was not only concerned about himself and what I could give him. Sure, he did ask me to buy him the latest video game. I mean, he is a kid still! (Me smiling.)
To keep myself from blurting out the first thing that came to my mind, I smiled and tried laughing it off, but him being smart, he repeated his question. The best response I had was 'A little bit of both, Salim!'
He just looked at me with this indecisive look. His big, oval, brown eyes were curious, but I had no other answer for him. I felt like I had let him down when I had to tell him that doing time with family there is really something special because you understand that you're not alone. That someone loves and cares about you enough to respond to your letters, to answer your phone calls, or drive, at times, five-fifty miles to come see you. I could tell that none of this made sense to him because we all adored him. I had even sent him fifty dollars last month because he got all A's on his report card. We doted all of our attention on him whenever we could.
'Unc, I would come see you everyday if they let me,' he said and I knew he meant it. All I could do was rub my hands down his waves because he would make me cry. To give you a little back story, I haven't seen him in almost seven years. The last time he came to see me, I had to pick him up to take a picture. But now, he's almost as tall as me. Seriously!
Anywho, after the visit was over, I went back to my cell and thought for hours on end about the question. As you can imagine, being seventeen and sentenced to an eighteen year bid, after a few, family, friends, and those in between began to slip away like leaves in the fall. So yes, I have gone long stretches without anyone being on my team. I praise the Man upstairs for those times because they gave me more clarity and determination to succeed. For without those lonely and thought-provoking times, I can't tell you what kind of man I would be today. But in the moment, they were hard! To have to ask other inmates, or worse, have to stand in the 'INDIGENT' line for deoderant is the worst form of humiliation there is. For many inmates, it makes one bitter, dark, and distant.
That's only one reason people go without support in here. Another side of it is those who are so scared of being let down and lied to that they just decide to do 'hard time'. It means that they just completely cut everyone off. They don't respond to, or even write letters. They either send out or sell all of their pictures. I have mostly seen this with cats with a short sentence. Say three to five years. All in all, it's different strokes for different folks, because I would rather have family, despite the painful and dark moments, than not. Why, you wonder? Well, it's simple for me, I love contact with the outside world. My religion plays a huge role in it as well. In Islam, we are cautioned to not cut off family.
(A quick story): One day, after a long trip, one of the companions of Prophet Muhammad came to him and asked, 'Oh, Muhammad (SAWS), I have carried my mother for a long journey, from Afghanistan to Syria, does that make up for her giving birth to me?" Prophet Muhammad said, 'Not even for one pregnancy contraction.' So through this, you can understand the importance of mothers and family in Islam. So despite my mother's absence during this time, I have continued to write and send her cards and gifts. Every now and again, I am blessed with a response or a few dollars I know she really didn't have to send.
This is just why I say it is better with, but others have told me 'hard time' is better for them. Even with long sentences, people have told me the same. So now it's up to you, the readers, to respond and let us inside know what you think about all of this. For those who do leave a line or two, know that you are contributing to a conversation that may possibly help some change his or her life. Thank you for reading, have a wonderful day! You're on A DAY IN THE LIFE, with me, Michael McThune.