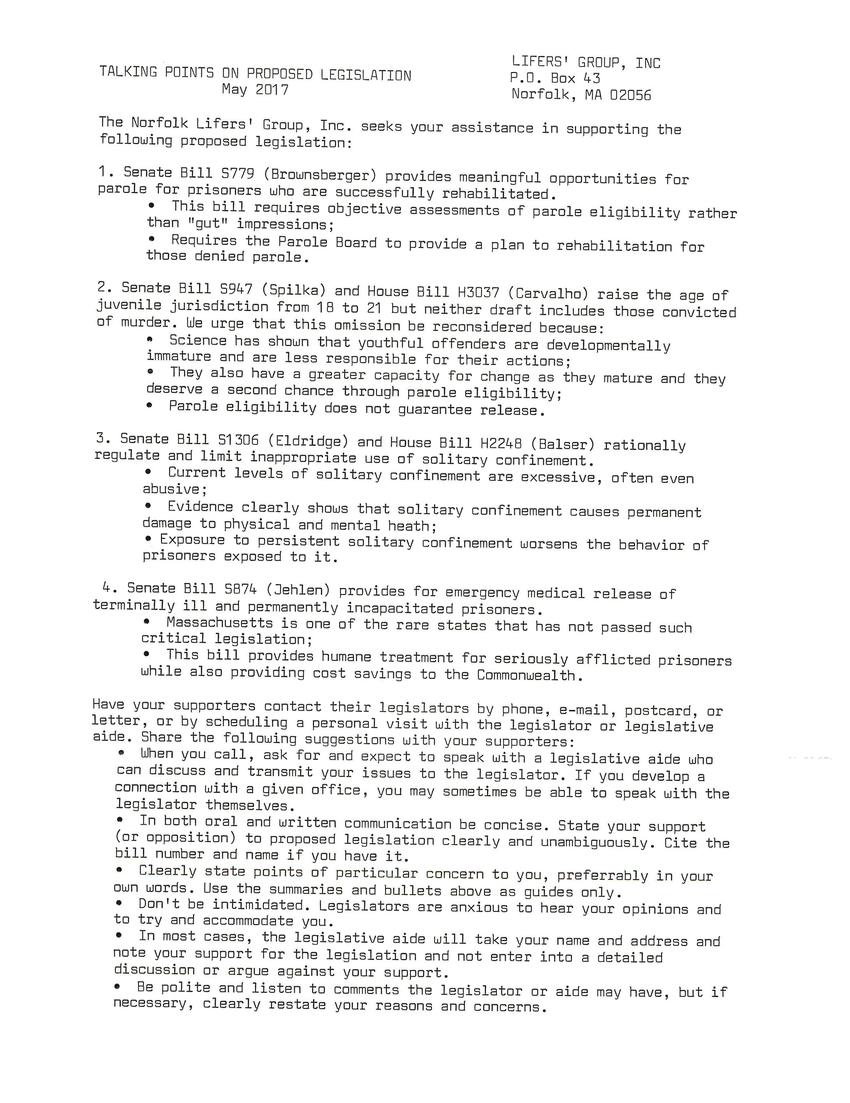 1. Senate Bill $779 ( Brownsberger) provides meaningful opportunities for parole for prisoners who are successfully rehabilitated.
.This bill requires objectives assessments of parole eligibility rather than "gut" impressions;
.Requires the Parole Board to provide a plan to rehabilitation for those denied parole.

2. Senate Bill $947 ( Spilka) and House Bill H3037 (Carva1ho) raise the age of juvenile jurisdiction from 18 to 21 but neither draft includes those convicted of murder. We urge that this omission be reconsidered because:
. Science has shown that youthful offenders are developmentally immature and are less responsible for their actions;
. They also have a greater capacity for change as the mature and they deserve a second chance though parole eligibility;
. Parole eligibility does not guarantee release.

4. Senate Bill s874 ( Jehlen) provides for emergency medical release of terminally ill and permanently incapacitated prisoners.
. Massachusetts is one of the rate states that has not passed such critical legislation;
. This bill provides humane treatment for seriously afflicted prisoners while also providing cost savings to the Commonwealth.

Have your supporter contact their legislators by phone, e-mail, postcard, or letter, or by scheduling a personal visit with the legislator or legislative aide. Share the following suggestions with your supporters:
. When you call, ask for and aspect to speak with a legislative aide who can discuss and transmit your issues to the legislator. If you develop a connection with a given office, you may sometimes be able to speak with the legislator themselves.
. In both oral and written communication be concise. State your support (or opposition) to proposed legislation clearly and unambiguously. Cite the bill number and name if you have it.
. Clearly state points of particular concern to you, preferably in your own words. Use the summaries and bullets above as guides only.
. Don't be intimidated. Legislators are anxious to hear your opinions and note your support for the legislation and not enter into a
detailed discussion or argue against your support
. Be polite and listen to comments the legislator aide may have, but if necessary, clearly restate your reasons and concerns.