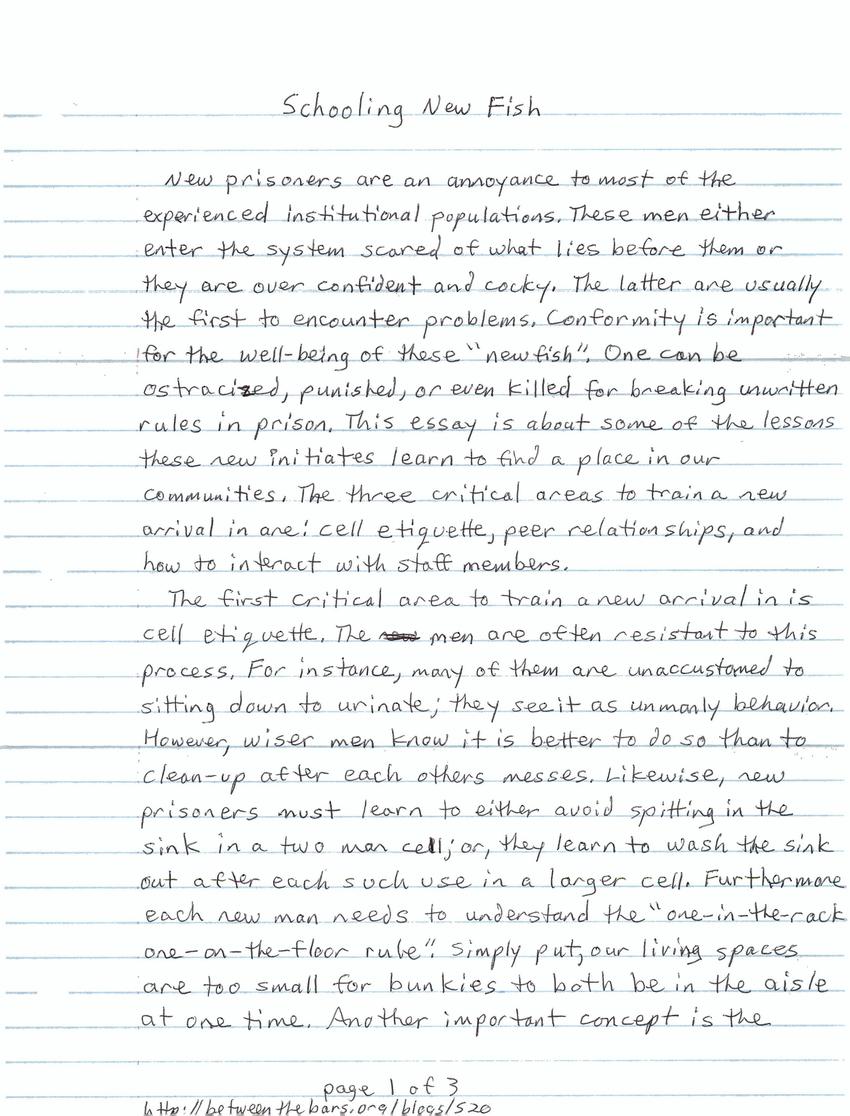 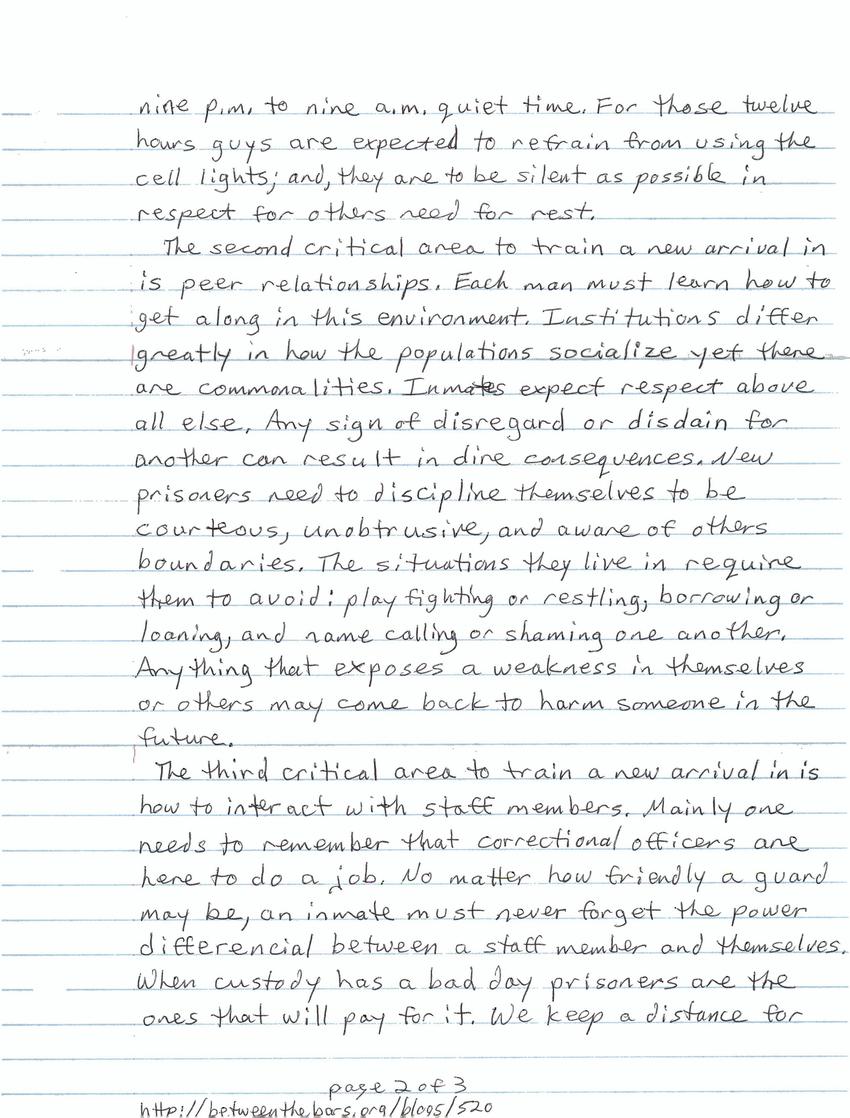 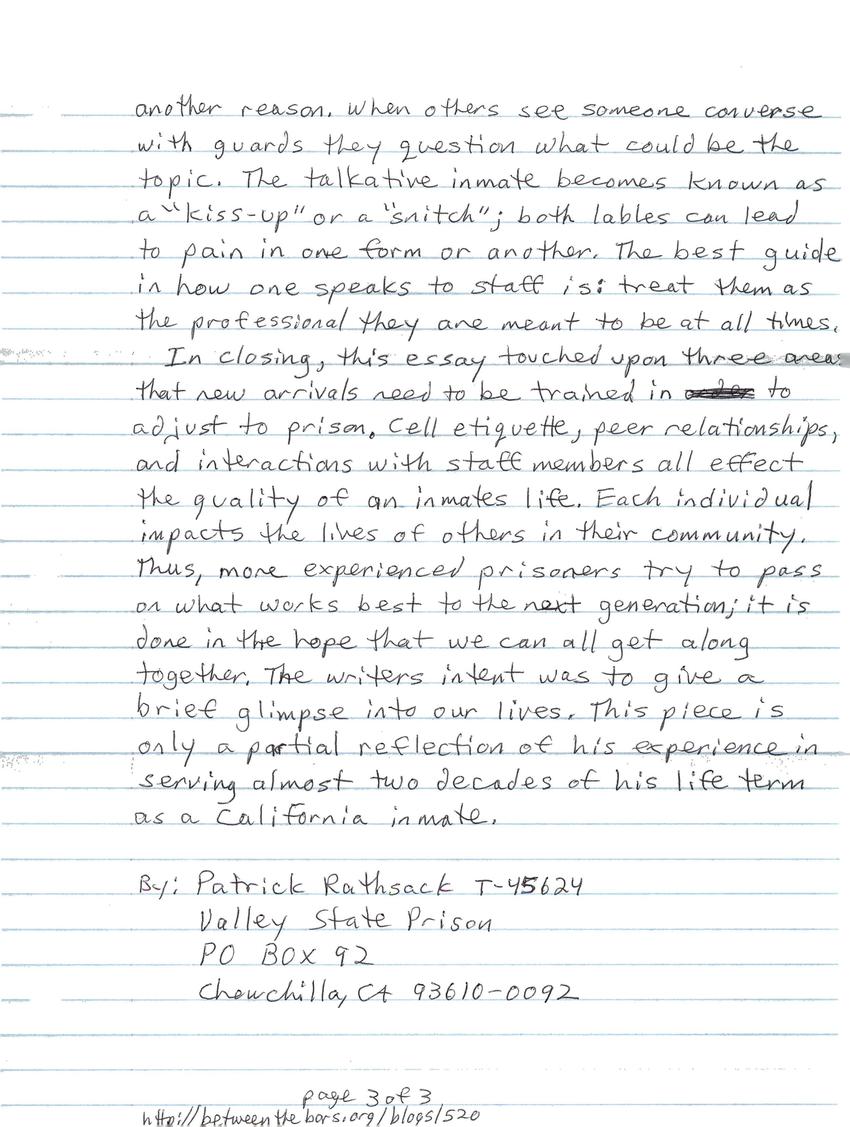 New prisoners are an annoyance to most experienced institutional populations. These men either enter the system scared of what lies before them or they are overconfident and cocky. The latter are usually the first to encounter problems. Conformity is important for the well-being of these "new fish". One can be ostracized, punished, or even killed for breaking unwritten rules in prison.

This essay is about some of the lessons these new initiates learn to find a place in our communities. The three critical areas to train a new arrival in are: cell etiquette, peer relationships, and how to interact with staff members.

The first critical area to train a new arrival is cell etiquette. The men are often resistant to this process. For instance, many of them are unaccustomed to sitting down to urinate. They see it as unmanly behavior. However, wiser men know it is better to do so than to clean up after each other's messes. Likewise, new prisoners must learn to either avoid spiting in the sink in a two-man cell or they learn to wash the sink out after each such use in a larger cell. Each new man needs to understand that "one-in-the-rack-one-on-the-floor" rule. Simply put, our living spaces are too small for bunkies to both be in the aisle at one time.

Another important concept is the 9 P.M. to 9 A.M. quiet time. For those twelve hours, guys are expected to refrain from using the cell lights, and they are to be silent as possible in respect for other's need for rest.

In peer relationships, each man must learn how to get along in this environment. Institutions differ greatly in how the populations socialize, yet there are commonalities. Inmates expect respect above all else. Any sign of disregard or disdain for another can result in dire consequences. New prisoners need to discipline themselves to be courteous, unobtrusive, and aware of other's boundaries. The situations they live in require them to avoid: play fighting or wrestling, borrowing or loaning, and name-calling or shaming one another. Anything that exposes a weakness in themselves or others may come back to harm someone in the future.

The main thing that one needs to remember in interacting with staff members is that correctional officers are here to do a job. No matter how friendly a guard may be, an inmate must never forget the differential power between them. When custody has a bad day, prisoners are the ones that will pay for it.

We keep a distance for another reason. When others see someone converse with guards, they question what could be the topic. The talkative inmate becomes known as a "kiss-up" or "snitch"; both labels can lead to pain in one form or another. The best way for one to speak to staff is to treat them as the professionals they are meant to be, at all times.

Cell etiquette, peer relationships, and interactions with staff members all effect the quality of an inmate's life. Each individual impacts the lives of others in their community. Thus, more experienced prisoners try to pass on what works best to the next generation. It is done in the hope that we can all get along together. The writer's intent was to give a brief glimpse into our lives. This place is only a partial reflection of his experience in serving almost two decades of his life term as a California inmate.

Dear Patrick,
I love your essay, "Schooling New Fish." It's very informative and well-written. I can tell you have a good vocabulary.
Keep writing, okay? You're good at it. Writing is awesome and helps me with so many things. I hope it's helping you, too.
-Grace