Talk The View Of A Connecticut Prisoner Vol. 2 No.2 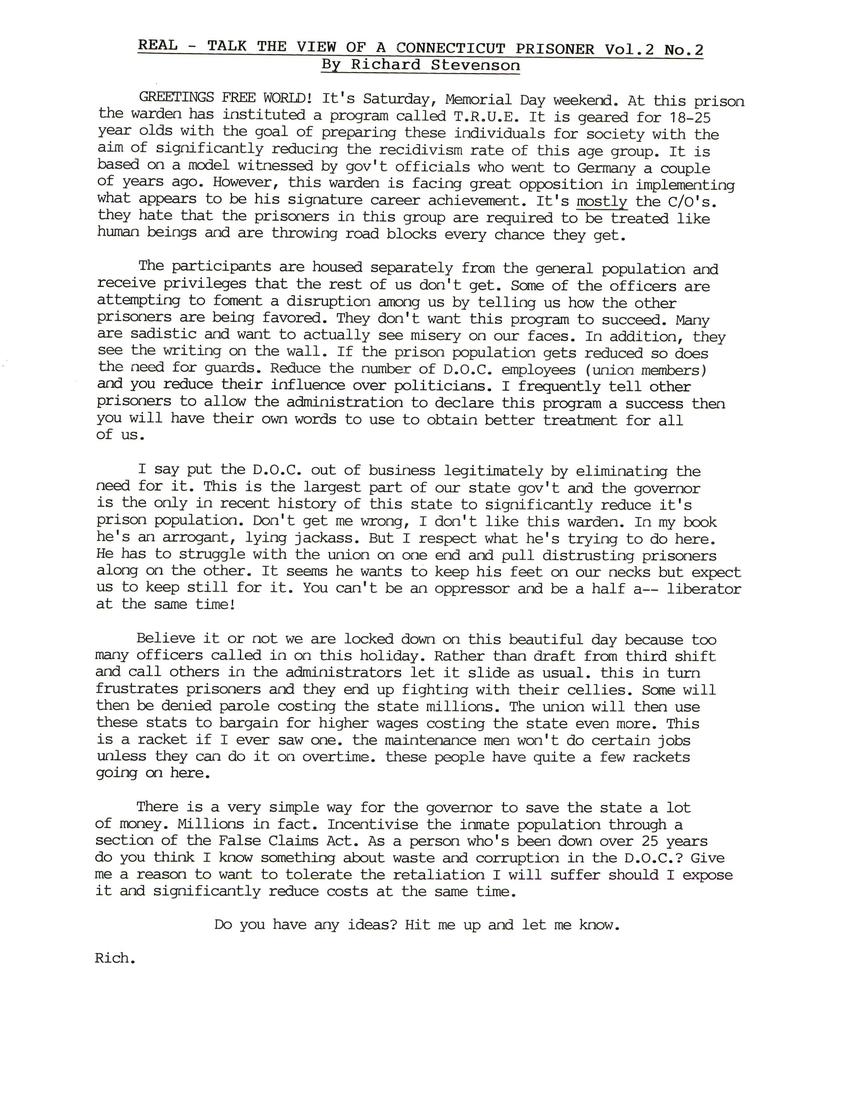 REAL - TALK THE VIEW OF A CONNECTICUT PRISONER Vol.2 No.2
By Richard Stevenson

GREETINGS FREE WORLD! It's Saturday, Memorial Day weekend. At this prison the warden has instituted a program called T.R.U.E. It is geared for 18-25 year olds with the goal of preparing these individuals for society with the aim of significantly reducing the recidivism rate of this age group. It is based on a model witnessed by gov't officials who went to Germany a couple of years ago. However, this warden is facing great opposition in implementing what appears to be his signature career achievement. It's mostly the C/O's. they hate that the prisoners in this group are required to be treated like human beings and are throwing road blocks every chance they get.

The participants are housed separately from the general population and receive privileges that the rest of us don't get. Some of the officers are attempting to foment a disruption among us by telling us how the other prisoners are being favoured. They don't want this program to succeed. Many are sadistic and want to actually see misery on our faces. In addition, they see the writing on the wall. If the prison population gets reduced so does the need for guards. Reduce the number of D.O.C. employees (union members) and you reduce their influence over politicians. I frequently tell other prisoners to allow the administration to declare this program a success then you will have their own words to use to obtain better treatment for all of us.

I say put the D.O.C. out of business legitimately by eliminating the need for it. This is the largest part of our state gov't and the governor is the only recent history of this state to significantly reduce it's prison population. Don't get me wrong, I don't like this warden. In my book he's an arrogant, lying jackass. But I respect what he's trying to do here. He has to struggle with the union on one end and pull distrusting prisoners along on the other. It seems he wants to keep his feet on our necks but expect us to keep still for it. You can't be an oppressor and be a half a-- liberator at the same time!

Believe it or not we are locked down on this beautiful day because too many officers called in on this holiday. Rather than draft from third shift and call others in the administrators let it slide as usual. This is turn frustrates prisoners and they end up fighting with their cellies. Some will then be denied parole costing the state millions. The union will then use these stats to bargain for higher wages costing the state even more. This is a racket if I ever saw one. The maintenance men won't do certain jobs unless they can do it on overtime. These people have quite a few rackets going on here.

There is a very simple way for the governor to save the state a lot of money. Millions in fact. Incentivise the inmate population through a section of the False Claims Act. As a person who's been down over 25 years do you think I know something about waste and corruption in the D.O.C.? Give me a reason to want to tolerate the retaliation I will suffer should I expose it and significantly reduce costs at the same time.

Do you have any ideas? Hit me up and let me know.