Stand Up To The Bully In The White House 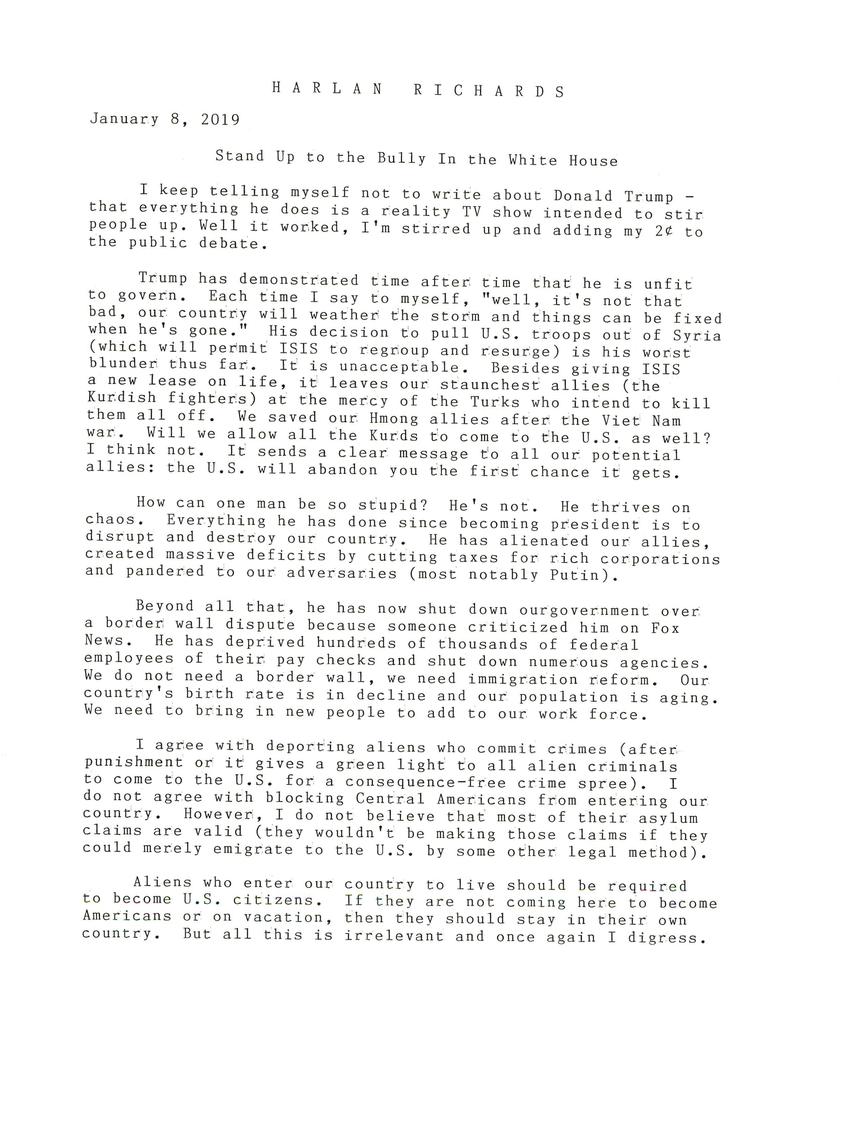 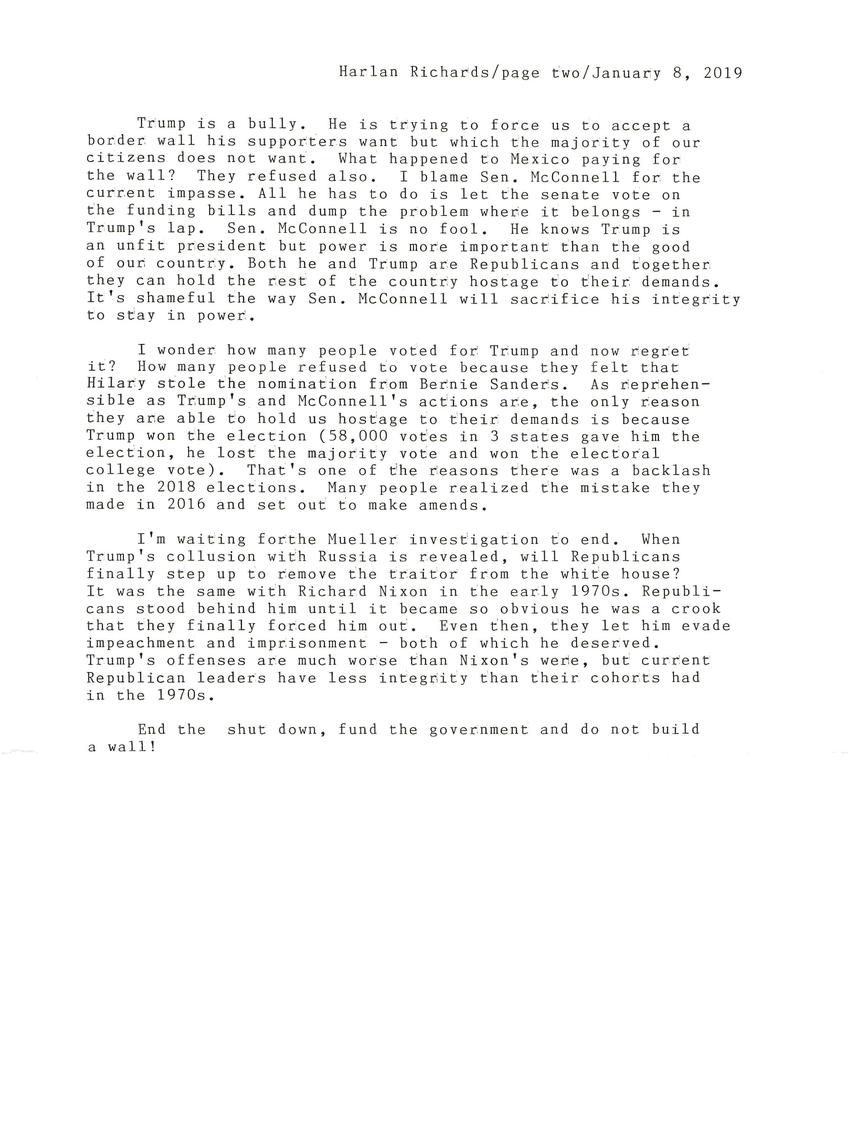 Stand Up to The Bully In The White House

I keep telling myself not to write about Donald Trump—that everything he does is a reality TV show intended to stir people up. Well, it worked. I'm stirred up and adding my two cents to the public debate.

Trump has demonstrated time after time that he is unfit to govern. Each time I say to myself, "Well, it's not that bad. Our country will weather the storm and things can be fixed when he's gone." His decision to pull US troops out of Syria (which will permit ISIS to regroup and resurge) is his worst blunder thus far. It is unacceptable. Besides giving ISIS a new lease on life, it leaves our staunchest allies (the Kurdish fighters) at the mercy of the Turks, who intend to kill them all off. We saved our Hmong allies after the Vietnam War. Will we allow all the Kurds to come to the US as well? I think not. It send a clear message to all our potential allies: the US will abandon you the first chance it gets.

How can one man be so stupid? He's not. He thrives on chaos. Everything he has done since becoming president is to disrupt and destroy our country. He has alienated our allies, created massive deficits by cutting taxes for rich corporations, and pandered to our adversaries (most notably Putin).

Beyond all that, he has now shut down our government over a border wall dispute because someone criticized him on Fox News. He has deprived hundreds of thousands of federal employees of their paychecks and shut down numerous agencies. We do not need a border wall, we need immigration reform. Our country's birth rates is in decline and our population is aging. We need to bring in new people to add to our work force.

I agree with deporting aliens who commit crimes (after punishment or it gives a green light to all alien criminals to come to the US for a consequence-free crime spree). I do not agree with blocking Central Americans from entering our country. However, I do not believe that most of their asylum claims are valid. They wouldn't be making those claims if they could merely emigrate to the US by some other legal method.

Aliens who enter our country to live should be required to become US citizens. If they are not coming home to become Americans or on vacation, then they should stay in their own country. But all this is irrelevant, and once again I digress.

Trump is a bully. He is trying to force us to accept a border wall his supporters want but which the majority of our citizens do not want. What happened to Mexico paying for the wall? They refused also. I blame Sen. McConnell for the current impasse. All he has to do is let the senate vote on the funding bills and dump the problem where it belongs—in Trump's lap. Sen. McConnell is no fool. He knows Trump is an unfit president, but power is more important than the good of our country. Both he and Trump are Republicans, and together they can hold the rest of the country hostage to their demands. It's shameful the way Sen. McConnell will sacrifice his integrity to stay in power.

I wonder how many people voted for Trump and now regret it. How many people refused to vote because they felt that Hilary stole the nomination for Bernie Sanders? As reprehensible as Trump's and McConnell's actions are, the only reason they are able to hold us hostage to their demands is because Trump won the election (58,000 votes in three states gave him the election; he lost the majority vote and won the electoral college). That's one of the reasons there was a backlash in the 2018 elections. Many people realized the mistake they made in 2016 and set out to make amends.

I'm waiting for the Mueller Investigation to end. When Trump's collusion with Russia is revealed, will Republicans finally step up to remove the traitor from the White House? It was the same with Richard Nixon in the early 1970s. Republicans stood behind him until it became so obvious he was a crook that they finally forced him out. Even then, they let him evade impeachment and imprisonment—both of which he deserved. Trump's offenses are much worse than Nixon's were, but current Republican leaders have less integrity than their cohorts had in the 1970s.

End the shutdown. Fund the government, and do not build a wall! 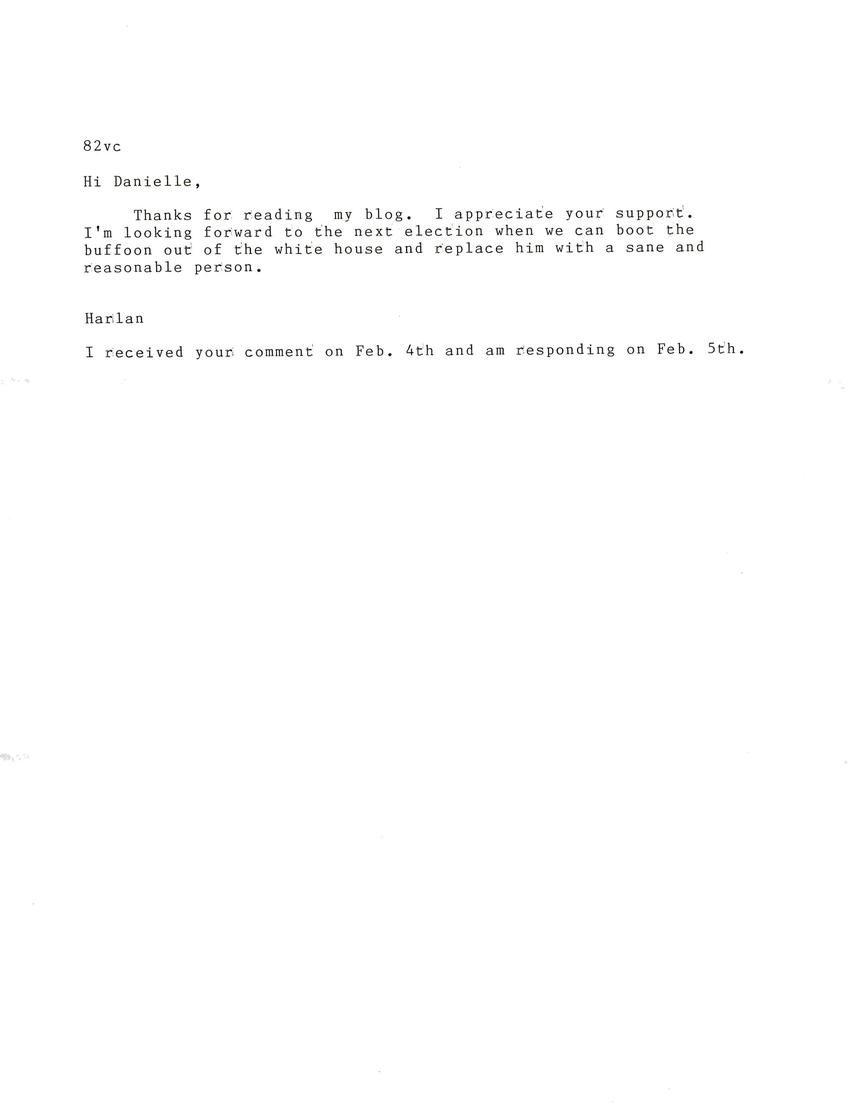