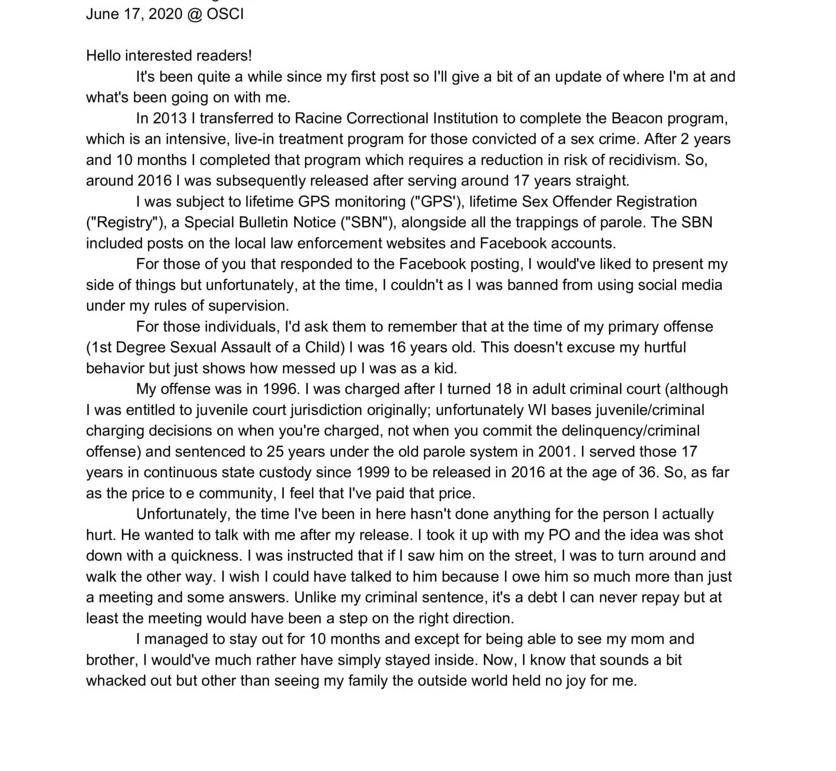 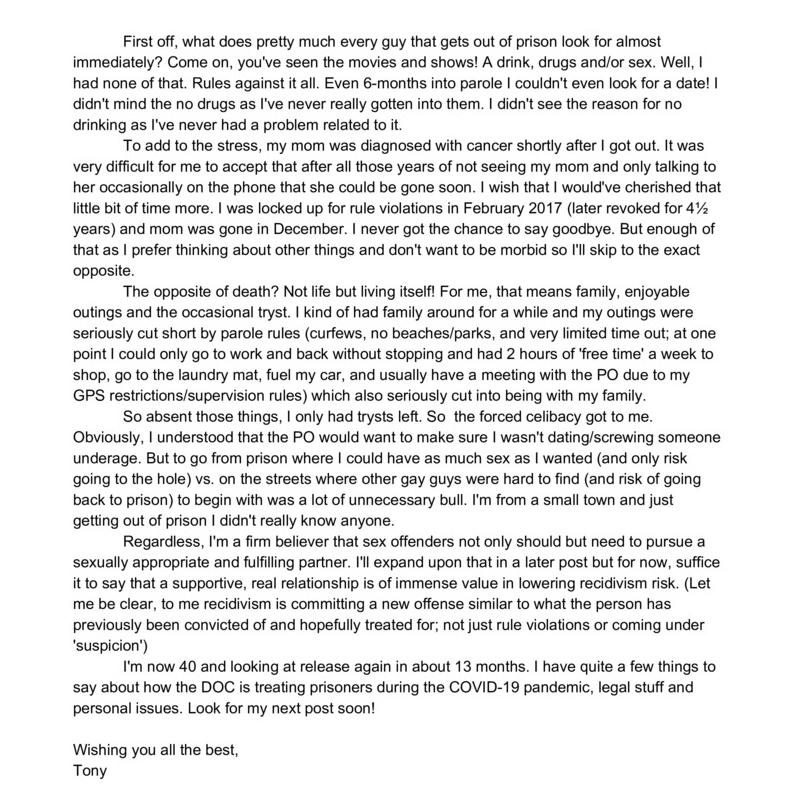 It's been quite a while since my first post so I'll give a bit of an update of where I'm at and what's been going on with me.

In 2013, I transferred to Racine Correctional Institution to complete the Beacon program, which is an intensive, live-in treatment program for those convicted of a sex crime. After 2 years and 10 months, I completed that program which requires a reduction in risk of recidivism. So, around 2016 I was subsequently released after serving around 17 years straight.

I was subject to lifetime GPS monitoring ("GPS"), lifetime Sex Offender Registration ("Registry"), a Special Bulletin Notice ("SBN"), alongside all the trappings of parole. The SBN included posts on the local law enforcement websites and Facebook accounts.

For those of you that responded to the Facebook posting, I would've liked to present my side of things but unfortunately, at the time, I couldn't as I was banned from using social media under my rules of supervision.

For those individuals, I'd ask them to remember that at the time of my primary offense (1st Degree Sexual Assault of a Child) I was 16 years old. This doesn't excuse my hurtful behavior but just shows how messed up I was as a kid.

My offense was in 1996. I was charged after I turned 18 in adult criminal court (although I was entitled to juvenile court jurisdiction originally; unfortunately WI bases juvenile/criminal charging decisions on when you're charged, not when you commit the delinquency/criminal offense) and sentenced to 25 years under the old parole system in 2001. I served those 17 years in continuous state custody since 1999 to be released in 2016 at the age of 36. So, as far as the price to the community, I feel that I've paid that price.

Unfortunately, the time I've been in here hasn't done anything for the person I actually hurt. He wanted to talk with me after my release. I took it up with my PO and the idea was shot down with a quickness. I was instructed that if I saw him on the street, I was to turn around and walk the other way. I wish I could have talked to him because I owe him so much more than just a meeting and some answers. Unlike my criminal sentence, it's a debt I can never repay but at least the meeting would have been a step in the right direction.

I managed to stay out for 10 months and except for being able to see my mom and brother, I would've much rather have simply stayed inside. Now, I know that sounds a bit whacked out but other than seeing my family the outside world held no joy for me.

First off, what does pretty much every guy that gets out of prison look for almost immediately? Come on, you've seen the movies and shows! A drink, drugs, and/or sex. Well, I had none of that. Rules against it all. Even 6-months into parole I couldn't even look for a date! I didn't mind the no drugs as I've never really gotten into them. I didn't see the reason for no drinking as I've never had a problem related to it.

To add to the stress, my mom was diagnosed with cancer shortly after I got out. It was very difficult for me to accept that after all those years of not seeing my mom and only talking to her occasionally on the phone that she could be gone very soon. I wish that I would've cherished that little bit of time more. I was locked up for rule violations in February 2017 (later revoked for 4½ years) and mom was gone in December. I never got the chance to say goodbye. But enough of that as I prefer thinking about other things and don't want to be morbid so I'll skip to the exact opposite.

The opposite of death? Not life but living itself! For me, that means family, enjoyable outings, and the occasional tryst. I kind of had family around for a while and my outings were seriously cut short by parole rules (curfews, no beaches/parks, and very limited time out; at one point I could only go to work and back without stopping and had 2 hours of 'free time' a week to shop, go to the laundry mat, fuel my car, and usually have a meeting with the PO due to my GPS restrictions/supervision rules) which also seriously cut into being with my family.

So absent those things, I only had trysts left. So the forced celibacy got to me. Obviously, I understood that the PO would want to make sure I wasn't dating/screwing someone underage. But to go from prison where I could have as much sex as I wanted (and the only risk going to the hole) vs. on the streets where other gay guys were hard to find (and risk of going back to prison) to begin with was a lot of unnecessary bull. I'm from a small town and just getting out of prison I didn't really know anyone.

Regardless, I'm a firm believer that sex offenders not only should but need to pursue a sexually appropriate and fulfilling partner. I'll expand upon that in a later post but for now, suffice it to say that a supportive, real relationship is of immense value in lowering recidivism risk. (Let me be clear, to me recidivism is committing a new offense similar to what the person has previously been convicted of and hopefully treated for; not just rule violations or coming under 'suspicion')

I'm now 40 and looking at release again in about 13 months. I have quite a few things to say about how the DOC is treating prisoners during the COVID-19 pandemic, legal stuff, and personal issues. Look for my next post soon!

Wishing you all the best,
Tony

Your story is one of many, and it's dishearting. To read of the things that your PO and the administration they work under have you follow is, as you say, pure bull. I understand these types of restrictions for perhaps repeat offenders(3rd/4th crime similar to the one they did first, etc.), but not for just one crime. Even your victim wanted to talk to you, but they didn't let you. That sucks. It sounded to me like you were in a 1984-esque type of world.

I think the restrictions should be a LOT less for first-time offenders like yourself. But what do I know?

Either way, I hope you are doing ok. I do understand this is an older post, but this story needs to be heard. 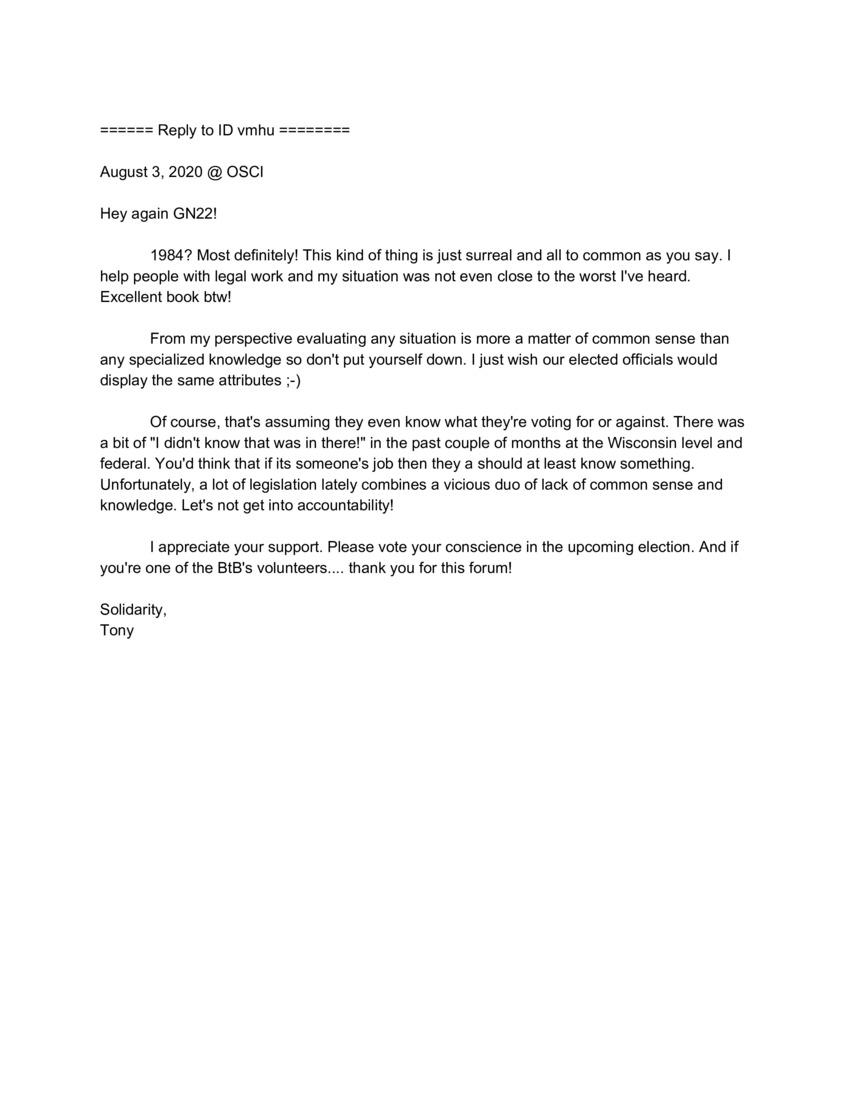