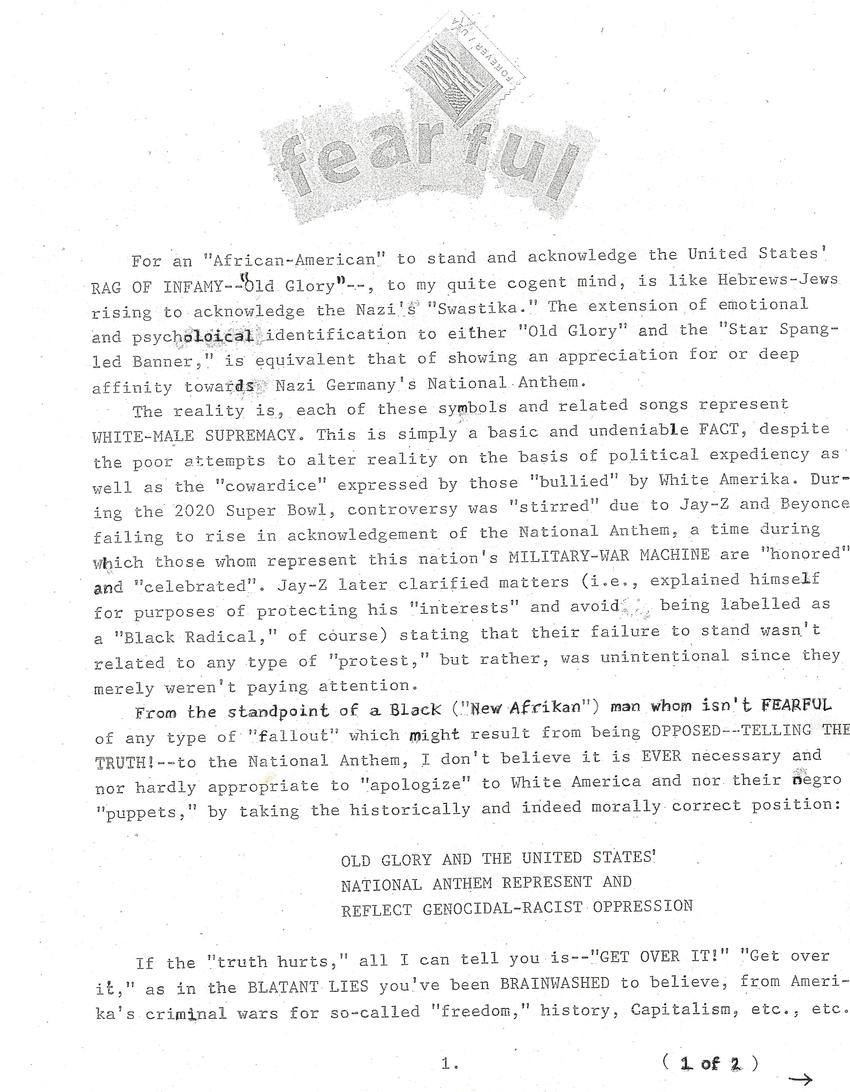 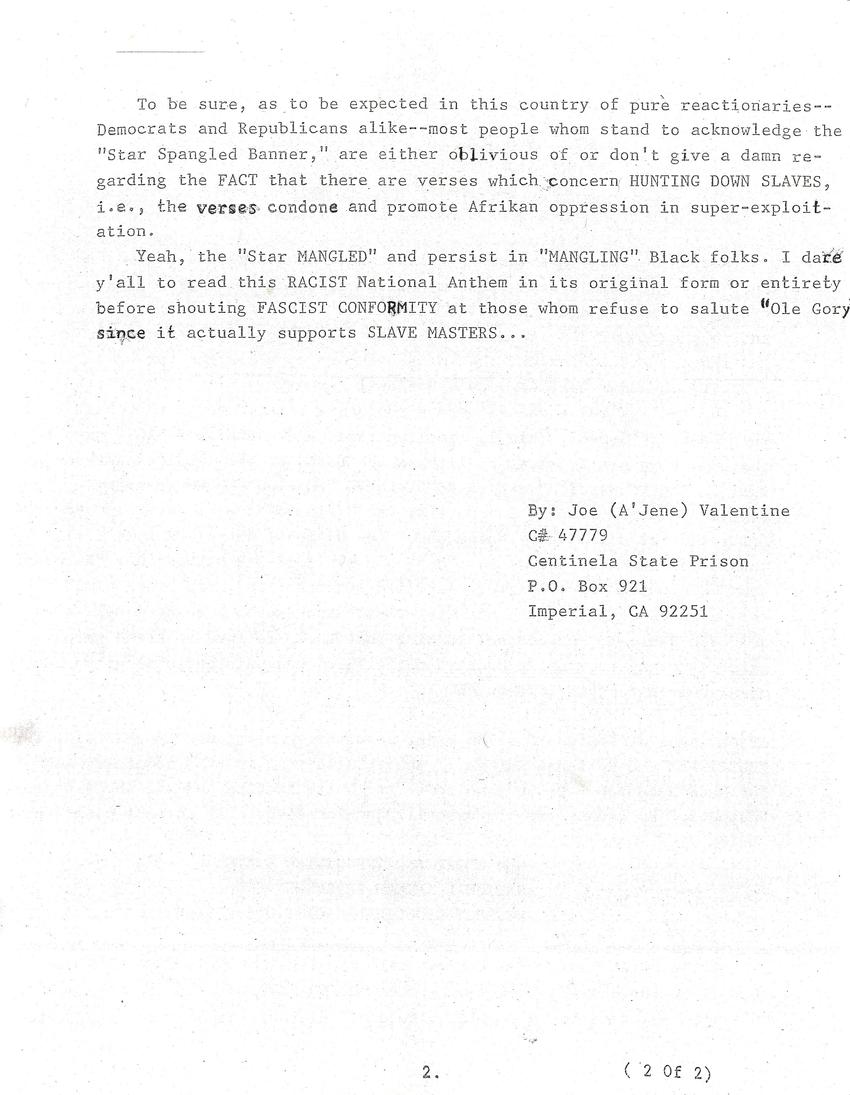 For an "African-American" to stand and acknowledge the United States' RAG OF INFAMY --"Old Glory"--, to my quite cogent mind, is like Hebrews-Jews rising to acknowledge the Nazi's "Swastika." The extension of emotional and psychological identification to either "Old Glory" and the "Star-Spangled Banner," is equivalent that of showing an appreciation for or deep affinity towards Nazi Germany's National Anthem.
The reality is, each of these symbols and related songs represents WHITE-MALE SUPREMACY. This is simply a basic and undeniable FACT, despite the poor attempts to alter reality on the basis of political expediency as well as the "cowardice" expressed by those "bullied" by White Amerika. During the 2020 Super Bowl, controversy was "stirred" due to Jay-Z and Beyonce failing to rise in acknowledgment of the National Anthem, a time during which those who represent this nation's MILITARY-WAR MACHINE are "honored" and "celebrated". Jay-Z later clarified matters (i.e., explained himself for purposes of protecting his "interests" and avoid being labeled as a "Black Radical," of course) stating that their failure to stand wasn't related to any type of "protest," but rather, was unintentional since they merely weren't paying attention.
From the standpoint of a Black ("New Afrikan") man who isn't FEARFUL of any type of "fallout" which might result from being OPPOSED--TELLING THE TRUTH!--to the National Anthem, I don't believe it is EVER necessary and nor hardly appropriate to "apologize" to White America and nor their negro "puppets," by taking the historically and indeed morally correct position:

If the "truth hurts," all I can tell you is--"GET OVER IT!" "Get over it," as in the BLATANT LIES you've been BRAINWASHED to believe, from Amerika's criminal wars for so-called "freedom," history, Capitalism, etc., etc.
To be sure, as to be expected in this country of pure reactionaries--Democrats and Republicans alike--most people who stand to acknowledge the "Star-Spangled Banner," are either oblivious of or don't give a damn regarding the FACT that there are verses which concern HUNTING DOWN SLAVES, i.e. the verses condone and promote Afrikan oppression in super-exploitation.
Yeah, the "Star MANGLED" and persist in "MANGLING" Black folks. I dare y'all to read this RACIST National Anthem in its original form or entirety before shouting FASCIST CONFORMITY at those who refuse to salute "Ole Gory since it actually supports SLAVE MASTERS...

Thanks for writing. I finished the transcription for your post.
(scanned reply – view as blog post)
uploaded Sept. 27, 2020.  Original (PDF) 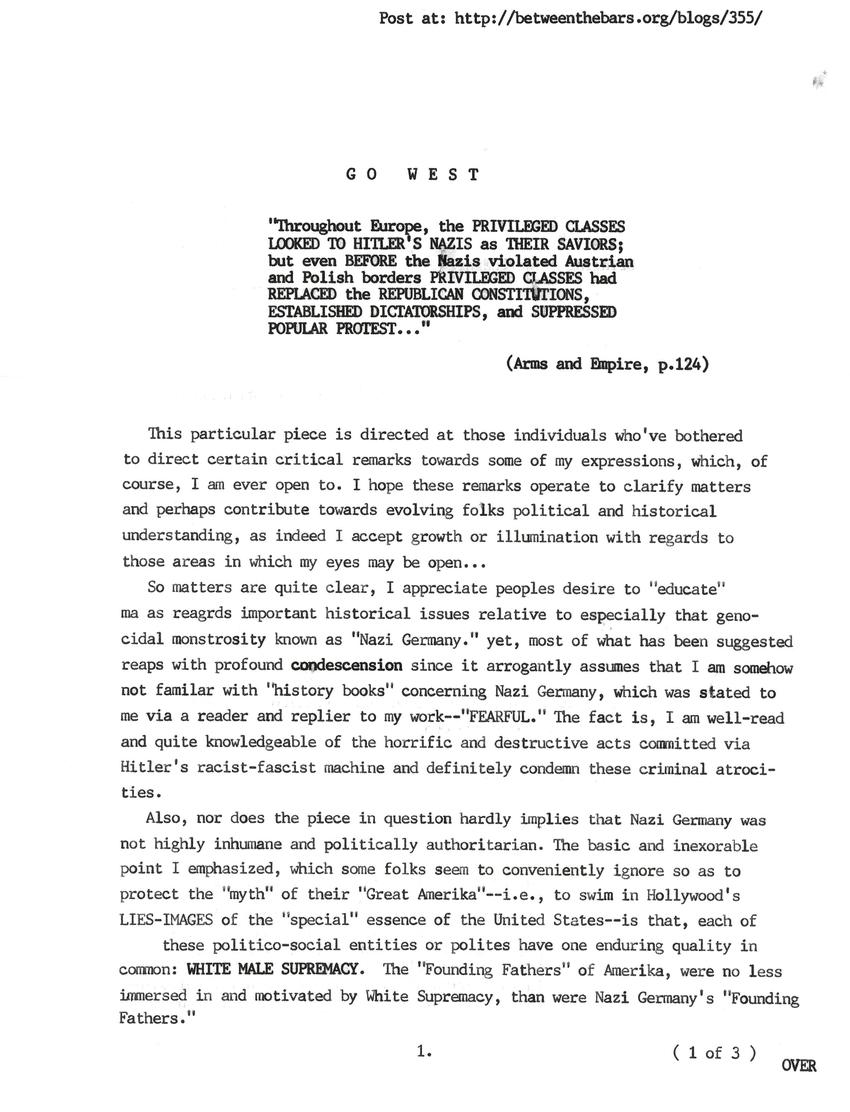 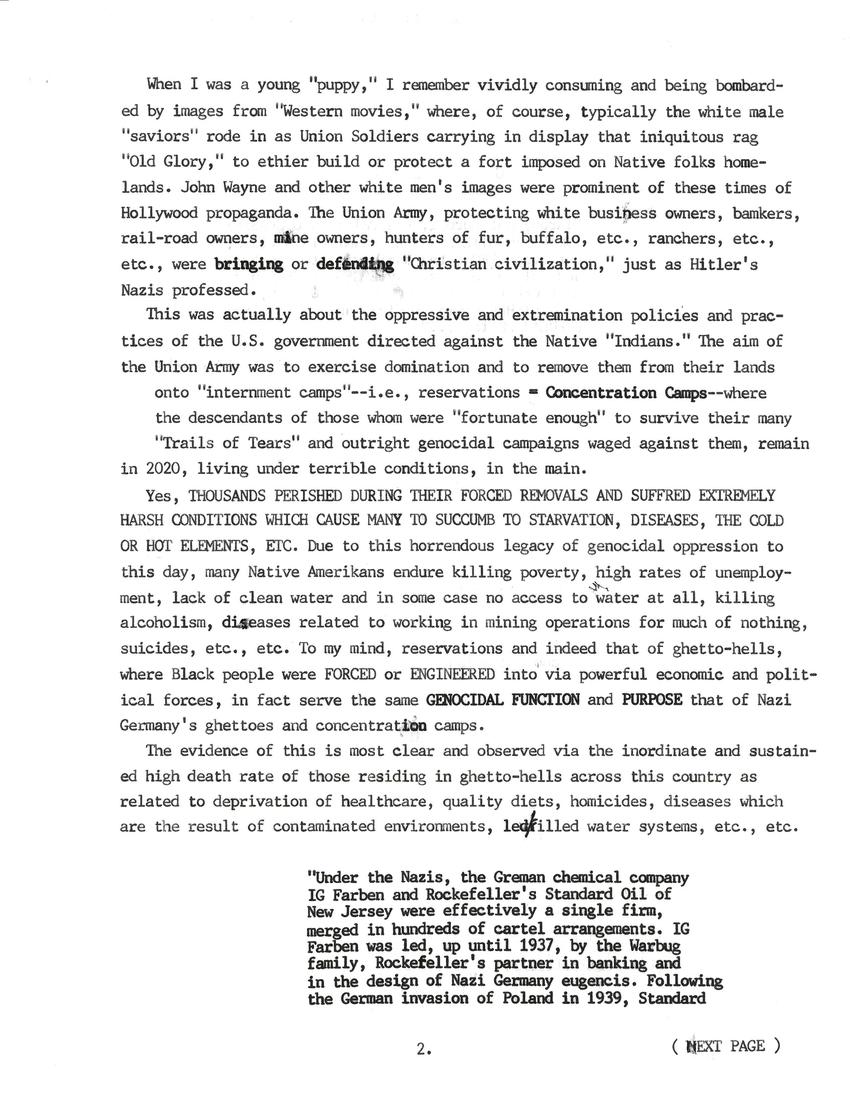 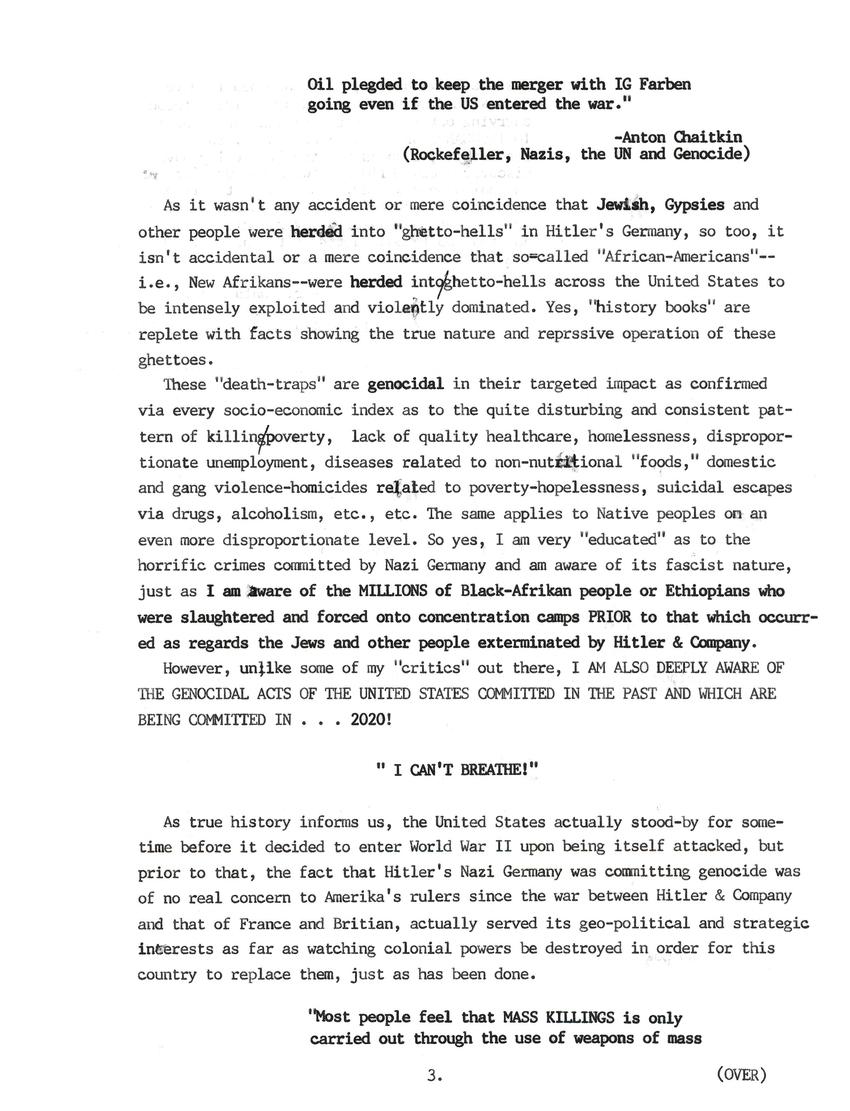 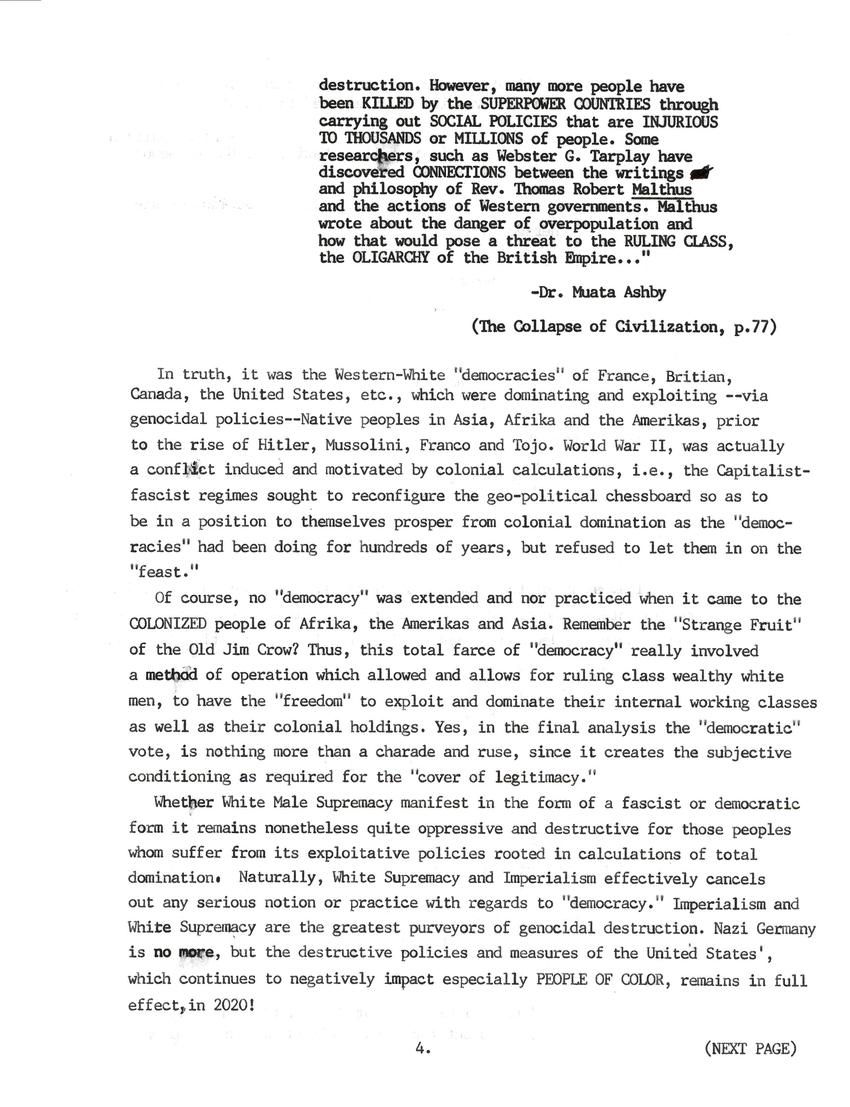 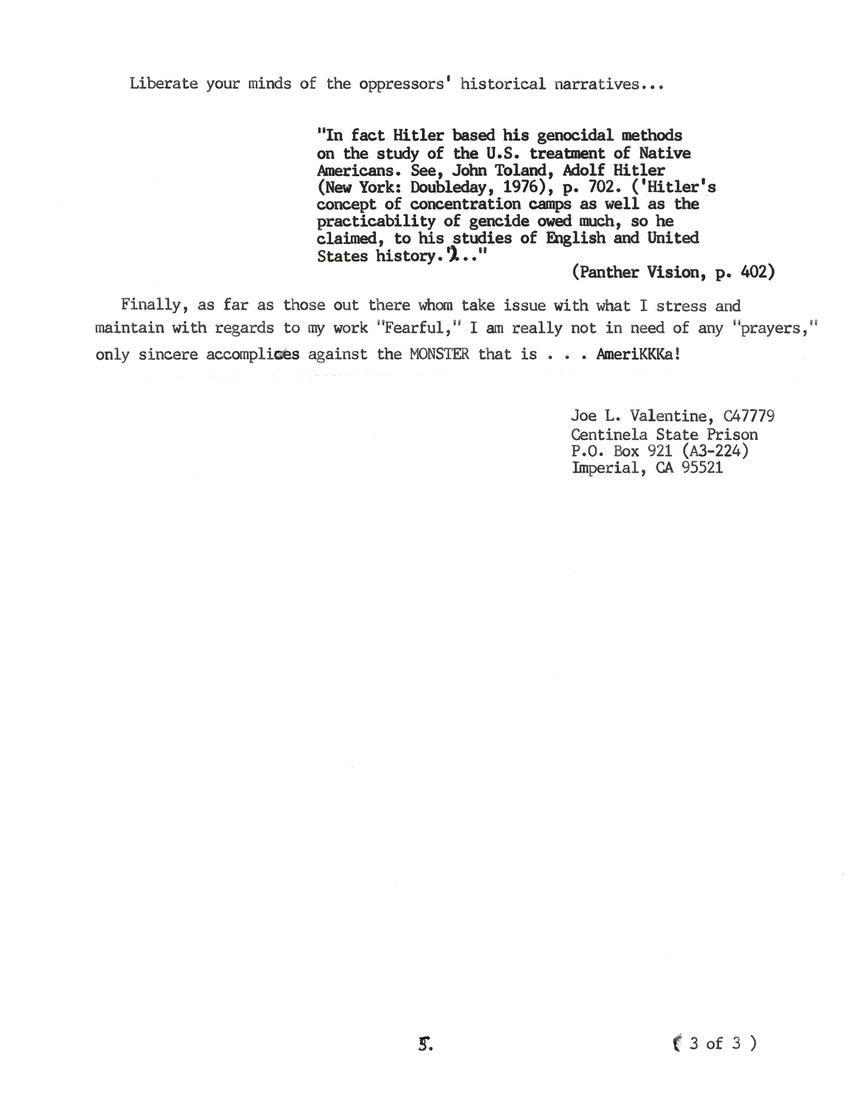