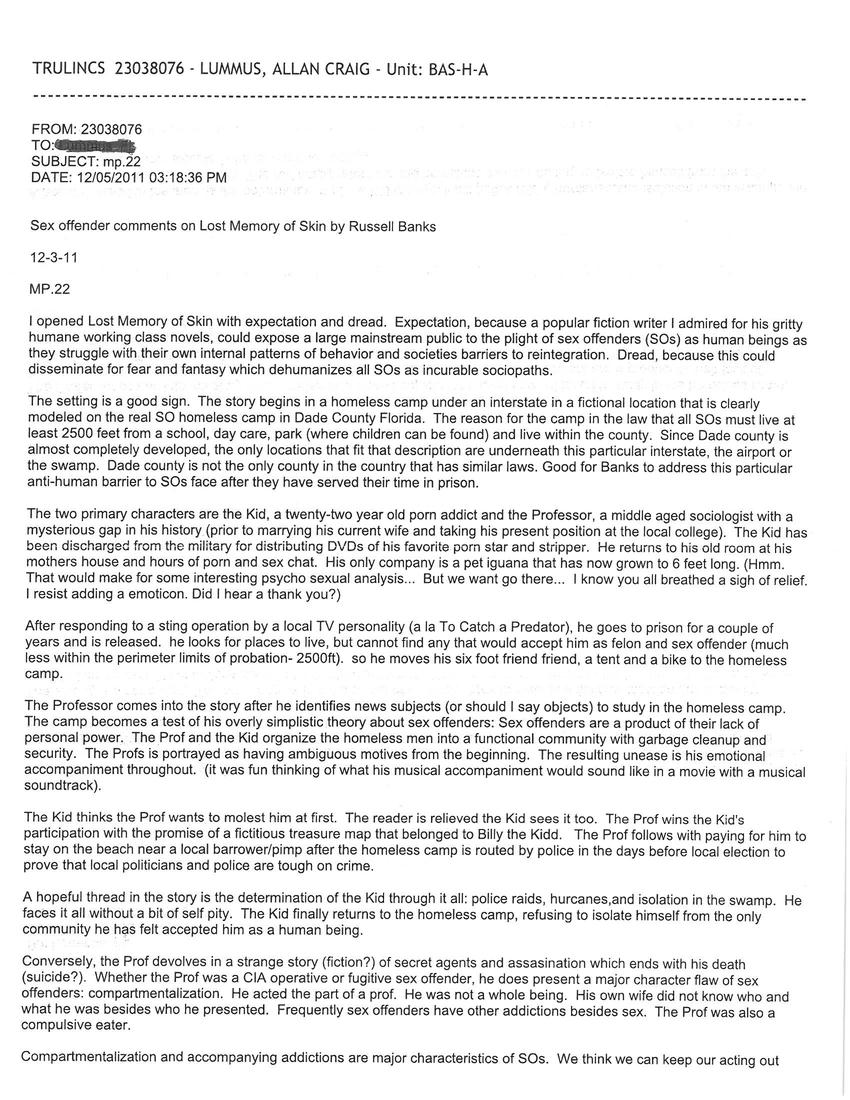 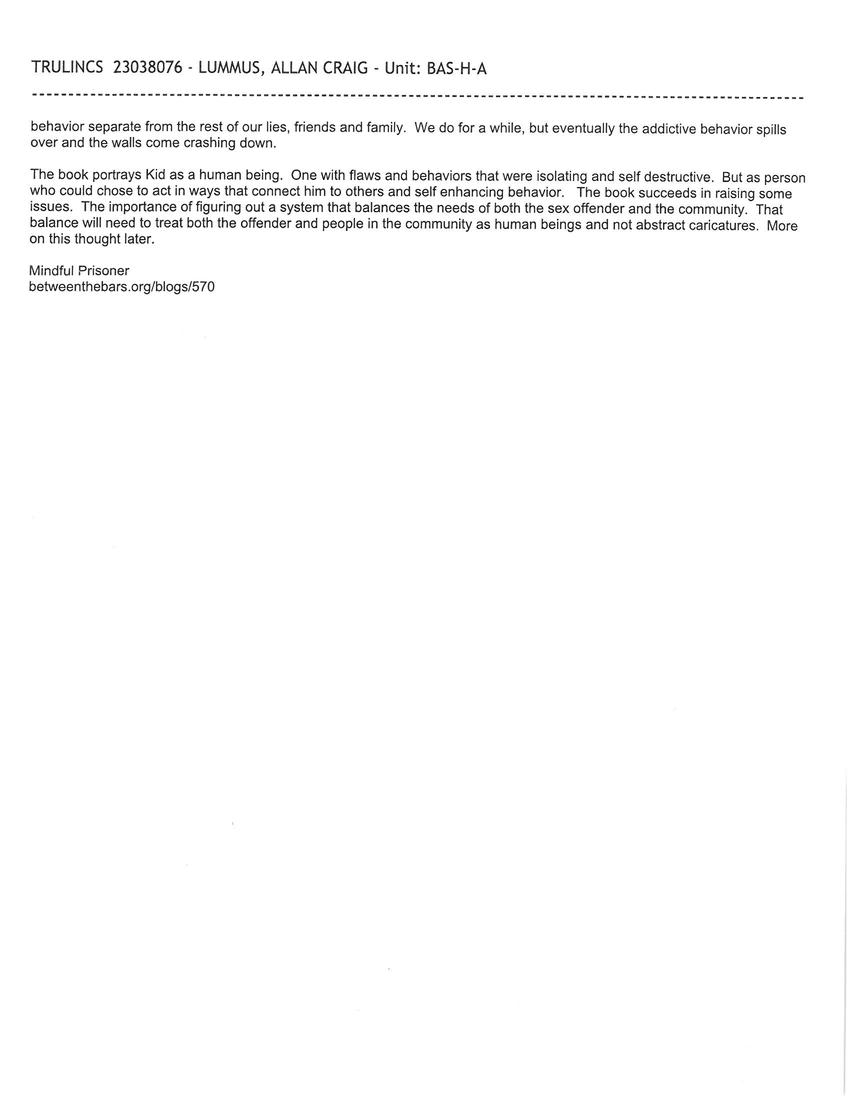 I opened Lost Memory of Skin with expectation and dread. Expectation, because a popular fiction writer I admired for his gritty humane working class novels, could expose a large mainstream public to the plight of sex offenders (SOs) as human beings as they struggle with their own internal patterns of behavior and societies barriers to reintegration. Dread, because this could disseminate for fear and fantasy which dehumanizes all SOs as incurable sociopaths.

The setting is a good sign. The story begins in a homeless camp under an interstate in a fictional location that is clearly modeled on the real SO homeless camp in Dade County Florida. The reason for the camp in the law that all SOs must live at least 2500 feet from a school, day care, park (where children can be found) and live within the county. Since Dade county is almost completely developed, the only locations that fit that description are underneath this particular interstate, the airport or the swamp. Dade county is not the only county in the country that has similar laws. Good for Banks to address this particular anti-human barrier to SOs face after they have served their time in prison.

After responding to a sting operation by a local TV personality (a la To Catch a Predator), he goes to prison for a couple of years and is released, he looks for places to live, but cannot find any that would accept him as felon and sex offender (much less within the perimeter limits of probation- 2500ft). so he moves his six foot friend friend, a tent and a bike to the homeless camp.

The Professor comes into the story after he identifies news subjects (or should I say objects) to study in the homeless camp. The camp becomes a test of his overly simplistic theory about sex offenders: Sex offenders are a product of their lack of personal power. The Prof and the Kid organize the homeless men into a functional community with garbage cleanup and security. The Profs is portrayed as having ambiguous motives from the beginning. The resulting unease is his emotional accompaniment throughout, (it was fun thinking of what his musical accompaniment would sound like in a movie with a musical soundtrack).

The Kid thinks the Prof wants to molest him at first. The reader is relieved the Kid sees it tco. The Prof wins the Kid's participation with the promise of a fictitious treasure map that belonged to Billy the Kidd. The Prof follows with paying for him to stay on the beach near a local barrower/pimp after the homeless camp is routed by police in the days before local election to prove that local politicians and police are tough on crime.

A hopeful thread in the story is the determination of the Kid through it all: police raids, hurcanes.and isolation in the swamp. He faces it all without a bit of self pity. The Kid finally returns to the homeless camp, refusing to isolate himself from the only community he has felt accepted him as a human being.

Conversely, the Prof devolves in a strange story (fiction?) of secret agents and assasination which ends with his death (suicide?). Whether the Prof was a CIA operative or fugitive sex offender, he does present a major character flaw of sex offenders: compartmentalization. He acted the part of a prof. He was not a whole being. His own wife did not know who and what he was besides who he presented. Frequently sex offenders have other addictions besides sex. The Prof was also a compulsive eater.

Compartmentalization and accompanying addictions are major characteristics of SOs. We think we can keep our acting out behavior separate from the rest of our lies, friends and family. We do for a while, but eventually the addictive behavior spills over and the walls come crashing down.

The book portrays Kid as a human being. One with flaws and behaviors that were isolating and self destructive. But as person who could chose to act in ways that connect him to others and self enhancing behavior. The book succeeds in raising some issues. The importance of figuring out a system that balances the needs of both the sex offender and the community. That balance will need to treat both the offender and people in the community as human beings and not abstract caricatures. More on this thought later.