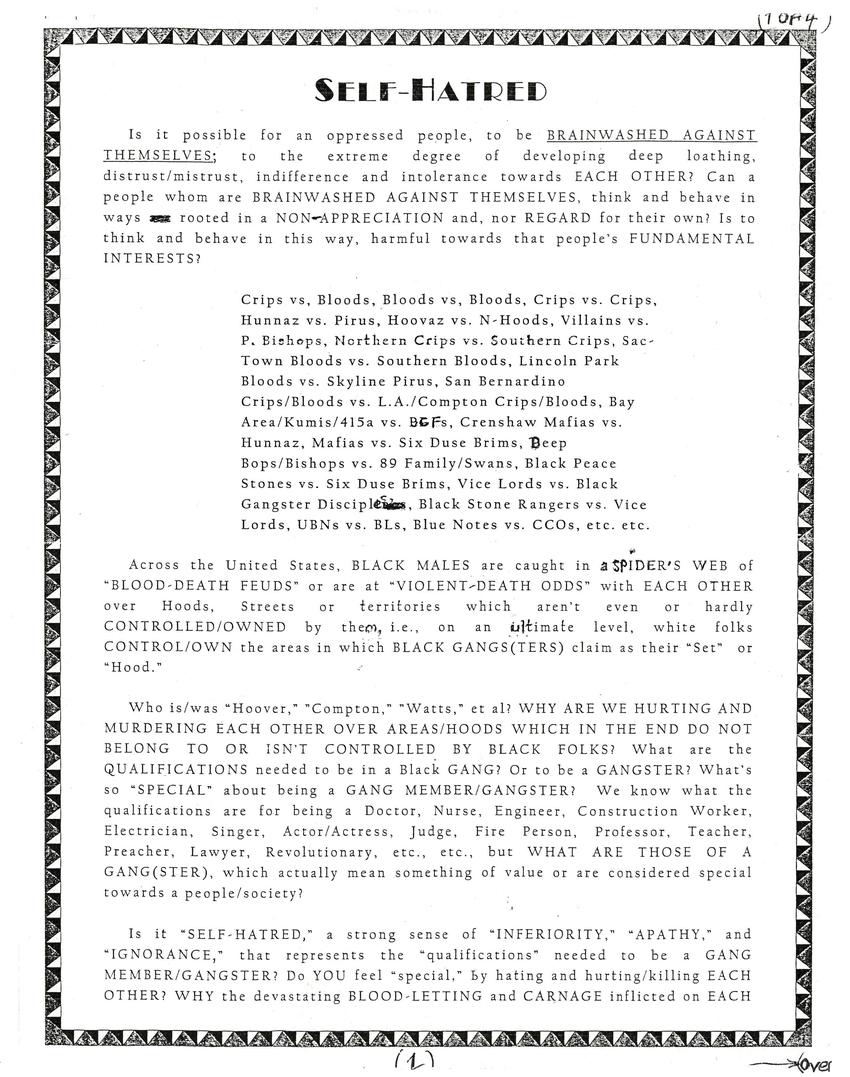 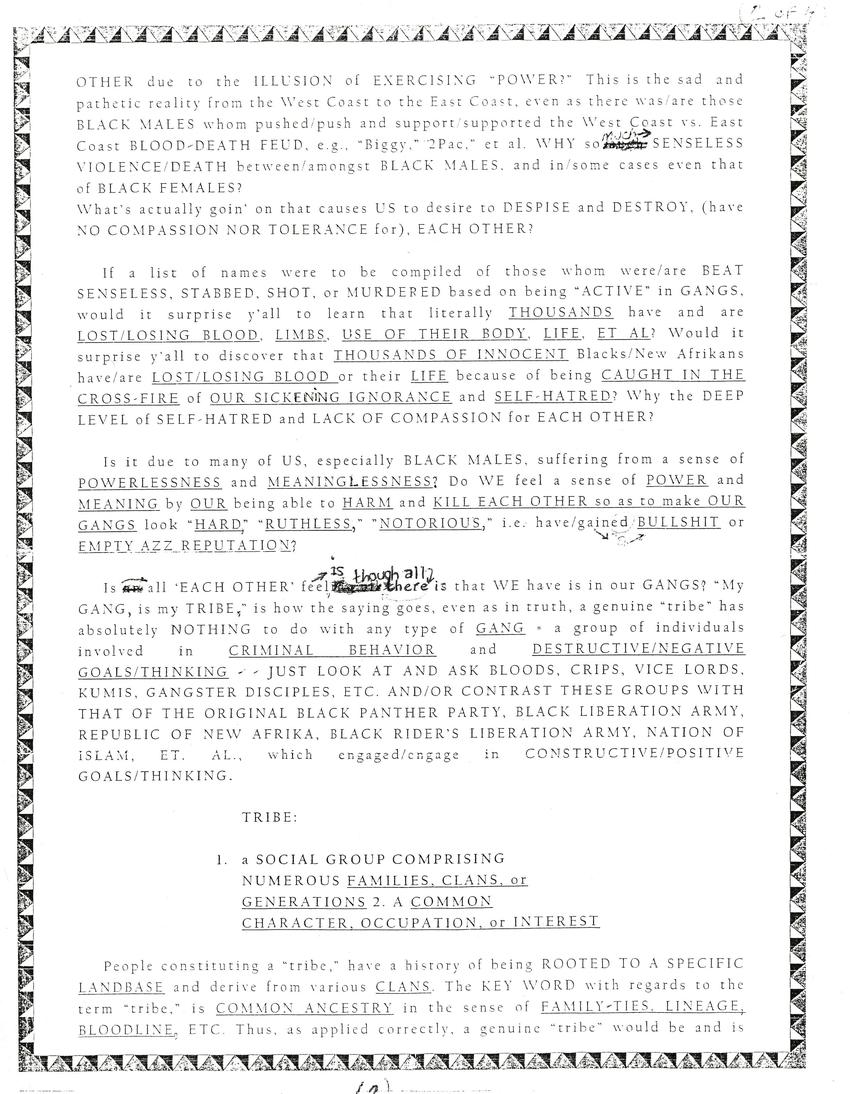 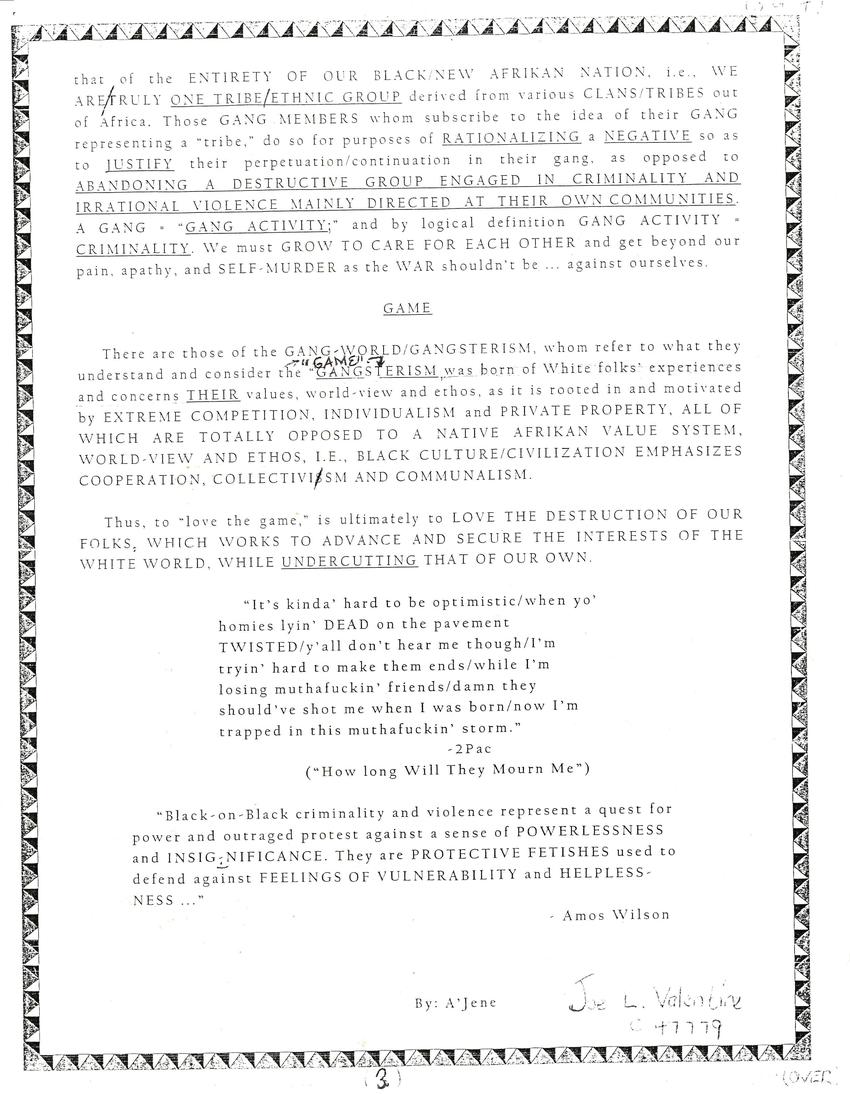 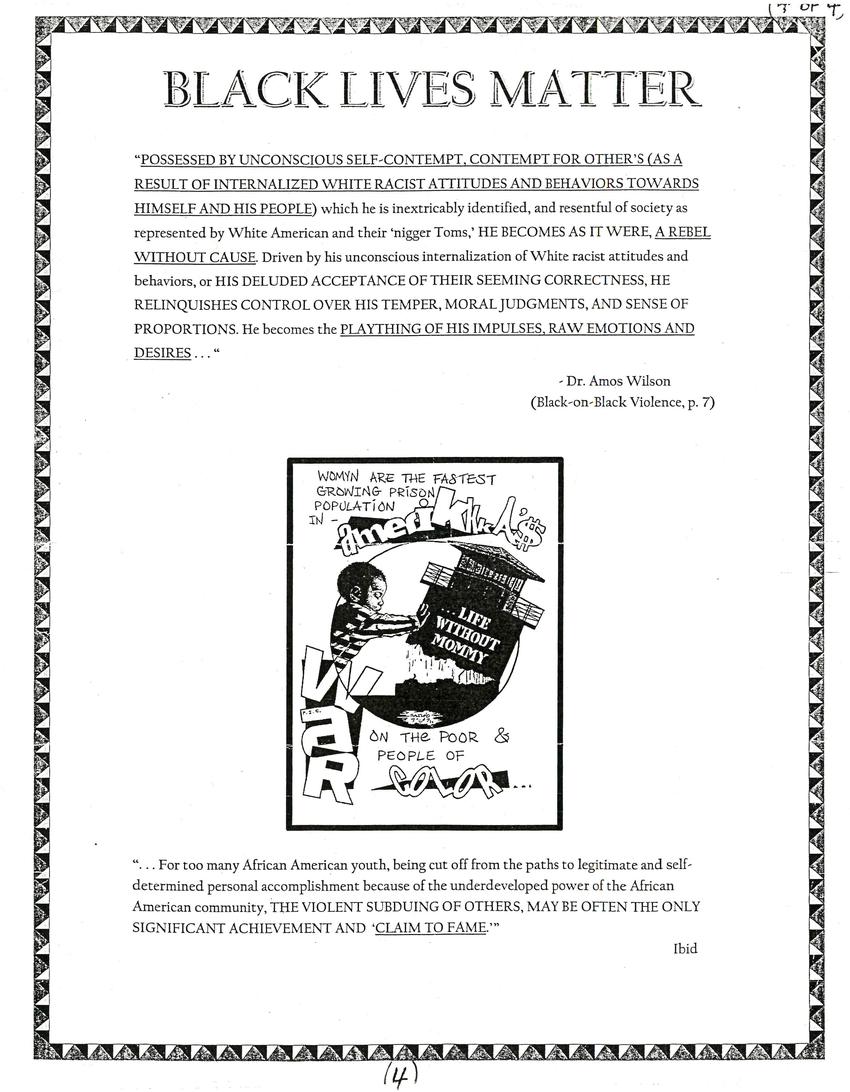 Self-Hatred
Is it possible for an oppressed people, to be BRAINWASHED AGAINST THEMSELVES; to the extreme degree of developing deep loathing, distrust/mistrust, indifference and intolerance towards EACH OTHER? Can a people whom are BRAINWASHED AGAINST THEMSELVES, think and behave in ways rooted in a NON-APPRECIATION and, nor REGARD for their own? Is to think and behave in this way, harmful towards that people's FUNDAMENTAL INTERESTS?

Across the United States, BLACK MALES are caught in a SPIDER'S WEB of "BLOOD-DEATH FEUDS" or are at "VIOLENT-DEATH ODDS" with EACH OTHER over Hoods, Streets or territories which aren't even or hardly CONTROLLED/OWNED by them, i.e., on an ultimate level, white folks CONTROL/OWN the areas in which BLACK GANGS(TERS) claim as their "Set" or "Hood."

Who is/was "Hoover," "Compton," "Watts," et al? WHY ARE WE HURTING AND MURDERING EACH OTHER OVER AREAS/HOODS WHICH IN THE END DO NOT BELONG TO OR ISN'T CONTROLLED BY BLACK FOLKS? What are the QUALIFICATIONS needed to be in a Black GANG? Or to be a GANGSTER? What's so "SPECIAL" about being a GANG MEMBER/GANGSTER? We know what the qualifications are for being a Doctor, Nurse, Engineer, Construction Worker, Electrician, Singer, Actor/Actress, Judge, Fire Person, Professor, Teacher, Preacher, Lawyer, Revolutionary, etc., etc., but WHAT ARE THOSE OF A GANG(STER), which actually mean something of value of are considered special towards a people/society?

Is it "SELF-HATRED," a strong sense of "INFERIORITY," "APATHY," and "IGNORANCE," that represents the "qualifications" needed to be a GANG MEMBER/GANGSTER? Do YOU feel "special," by hating and hurting/killing EACH OTHER? WHY the devastating BLOOD-LETTING and CARNAGE inflicted on EACH OTHER due to the ILLUSION of EXERCISING "POWER?" This is the sad and pathetic reality from the West Coast to the East Coast, even as there was/are these BLACK MALES whom pushed/push and support/supported the West Coast vs. East Coast BLOOD-DEATH FEUD, e.g., "Biggy," "2Pac," et al. WHY so much SENSELESS VIOLENCE/DEATH between/amongst BLACK MALES, and in/some cases even that of BLACK FEMALES?
What's actually goin' on that causes US to desire to DESPISE and DESTROY, (have NO COMPASSION NOR TOLERANCE for), EACH OTHER?
--> END OF PAGE 1 <--

If a list of names were to be compiled of those whom were/are BEAT SENSELESS, STABBED, SHOT, or MURDERED based on being "ACTIVE" in GANGS, would it surprise y'all to learn that literally THOUSANDS have and are LOST/LOSING BLOOD, LIMBS, USE OF THEIR BODY, LIFE, ET AL? Would it surprise y'all to discover that THOUSANDS OF INNOCENT Blacks/New Afrikans have/are LOST/LOSING BLOOD or their LIFE because of being CAUGHT in the CROSS-FIRE of OUR SICKENING IGNORANCE and SELF-HATRED? Why the DEEP LEVEL of SELF-HATRED and LACK OF COMPASSION for EACH OTHER?

Is it due to many of US, especially BLACK MALES, suffering from a sense of POWERLESSNESS and MEANINGLESSNESS? Do WE feel a sense of POWER and MEANING by OUR being able to HARM and KILL EACH OTHER so as to make OUR GANGS look "HARD," "RUTHLESS," "NOTORIOUS," i.e. have/gained BULLSHIT or EMPTY AZZ REPUTATION?

Is all 'EACH OTHER' feel is though all there is that WE have is in our GANGS? "My GANG, is my TRIBE," is how the saying goes, even as in truth, a genuine "tribe" has absolutely NOTHING to do with any type of GANG - a group of individuals involved in CRIMINAL BEHAVIOR and DESTRUCTIVE/NEGATIVE GOALS/THINKING - - JUST LOOK AT AND ASK BLOODS, CRIPS, VICE LORDS, KUMIS, GANGSTER DISCIPLES, ETC. AND/OR CONTRAST THESE GROUPS WITH THAT OF THE ORIGINAL BLACK PANTHER PARTY, BLACK LIBERATION ARMY, REPUBLIC OF NEW AFRIKA, BLACK RIDERS LIBERATION ARMY, NATION OF ISLAM, ET. AL. which engaged/engage in CONSTRUCTIVE/POSITIVE GOALS/THINKING.

People confusing a "tribe," have a history of being ROOTED TO A SPECIFIC LANDBASE and derive from various CLANS. The KEY WORD with regards to the term "tribe," is COMMON ANCESTRY in the sense of FAMILY-TIES, LINEAGE, BLOODLINE, ETC. Thus, as applied correctly, a genuine "tribe" would be and is that of the ENTIRETY OF OUR BLACK/NEW AFRIKAN NATION, i.e., WE ARE TRULY ONE TRIBE, ETHNIC GROUP derived from various CLANS/TRIBES out of Africa. Those GANG MEMBERS whom subscribe to the idea of their GANG representing a "tribe," do so for purposes of RATIONALIZING a NEGATIVE so as to JUSTIFY their perpetuation/continuation in their gang, as opposed to ABANDONING A DESTRUCTIVE GROUP ENGAGED IN CRIMINALITY AND IRRATIONAL VIOLENCE MAINLY DIRECTED AT THEIR OWN COMMUNITIES. A GANG - "GANG ACTIVITY;" and by logical definition GANG ACTIVITY - CRIMINALITY. We must GROW TO CARE FOR EACH OTHER and get beyond our pain, apathy, and SELF-MURDER as the WARE shouldn't be...against ourselves.

There are those of the GANG-WORLD/GANGSTERISM, who refer to what they understand and consider the "Game," "GANGSTERISM" was born of White folks' experiences and concerns THEIR values, world-view and ethos, as it is rooted in and motivated by EXTREME COMPETITION, INDIVIDUALISM and PRIVATE PROPERTY, ALL OF WHICH ARE TOTALLY OPPOSED TO A NATIVE AFRIKAN VALUE SYSTEM, WORLD-VIEW AND ETHOS, I.E., BLACK CULTURE/CIVILIZATION EMPHASIZES COOPERATION, COLLECTIVISM AND COMMUNALISM.

Thus, to "love the game," is ultimately to LOVE THE DESTRUCTION OF OUR FOLKS, WHICH WORKS TO ADVANCE AND SECURE THE INTERESTS OF THE WHILE WORLD, WHILE UNDERCUTTING THAT OF OUR OWN.

"It's kinda' hard to be optimistic/when yo' homies lyin' DEAD on the pavement TWISTED/y'all don't hear me though/I'm tryin' hard to make them ends'while I'm losing muthafuckin' friends/damn they should've shot me when I was born/now I'm trapped in this mothatfuckin' storm."
-2Pac
("How long Will They Mourn Me")

"Black-on-Black criminality and violence represent a quest for power and outraged protest against a sense of POWERLESSNESS and INSIGNIFICANCE. They are PROTECTIVE FETISHES used to defend against FEELINGS OF VULNERABILITY and HELPLESSNESS..."
- Amos Wilson

"POSSESSED BY UNCONSCIOUS SELF-CONTEMPT, CONTEMPT FOR OTHER'S (AS A RESULT OF INTERNALIZED WHITE RACIST ATTITUDES AND BEHAVIORS TOWARDS HIMSELF AND HIS PEOPLE) which he is inextricably identified, and resentful of society as represented by White American and their 'nigger Toms," HE BECOMES AS IT WERE, A REBEL WITHOUT CAUSE. Driven by his unconscious internalization of White racist attitudes and behaviors, or HIS DELUDED ACCEPTANCE OF THEIR SEEMING CORRECTNESS, HE RELINQUISHES CONTROL OVER HIS TEMPER, MORAL JUDGEMENTS, AND SENSE OF PROPORTIONS. He becomes the PLAYTHING OF HIS IMPULSES, RAW EMOTIONS AND DESIRES..."
- Dr. Amos Wilson
(Black-on-Black Violence, p.7)

[ An image depicting a child pushing over a building with the text: "Womyn are the fastest growing prison population in - amerikka$" and "War on the poor & people of color" ]

"...For too many African American youth, being cut off from the paths to legitimate and self-determined personal accomplishment because of the underdeveloped power of the African American community, THE VIOLENT SUBDUING OF OTHERS, MAY BE OFTEN THE ONLY SIGNIFICANT ACHIEVEMENT AND 'CLAIM TO FAME.'"
Ibid