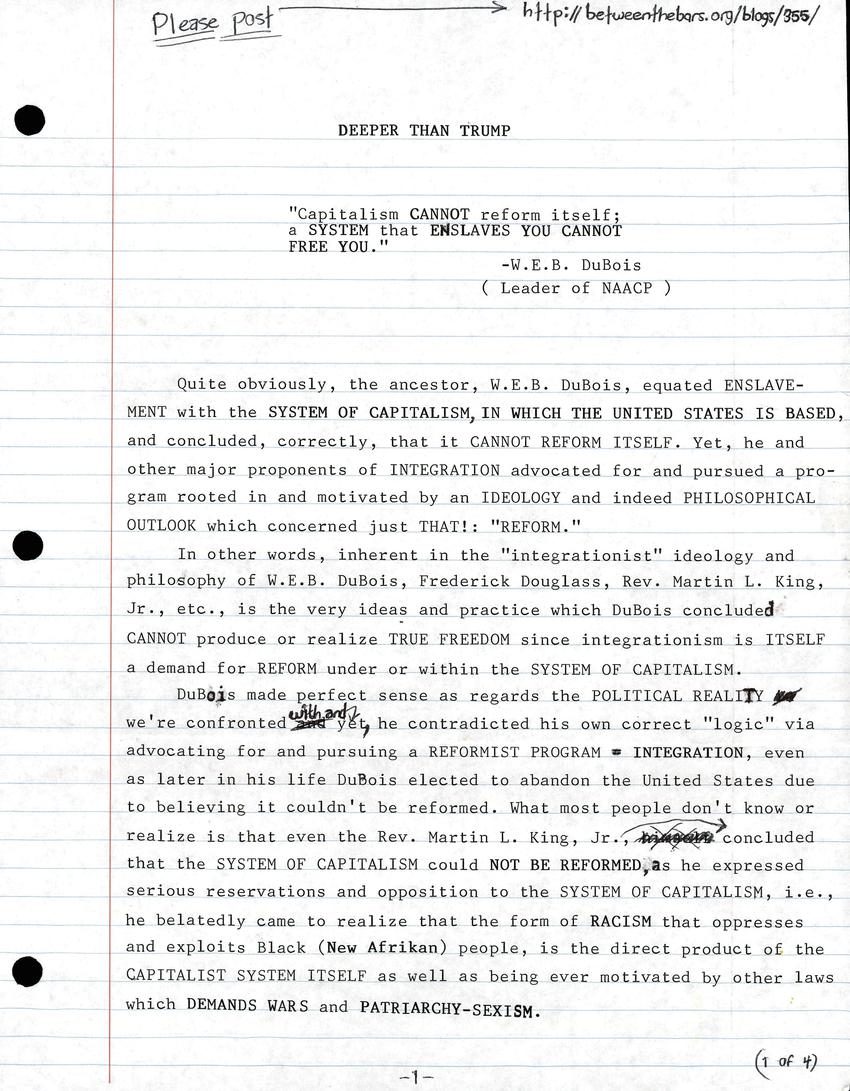 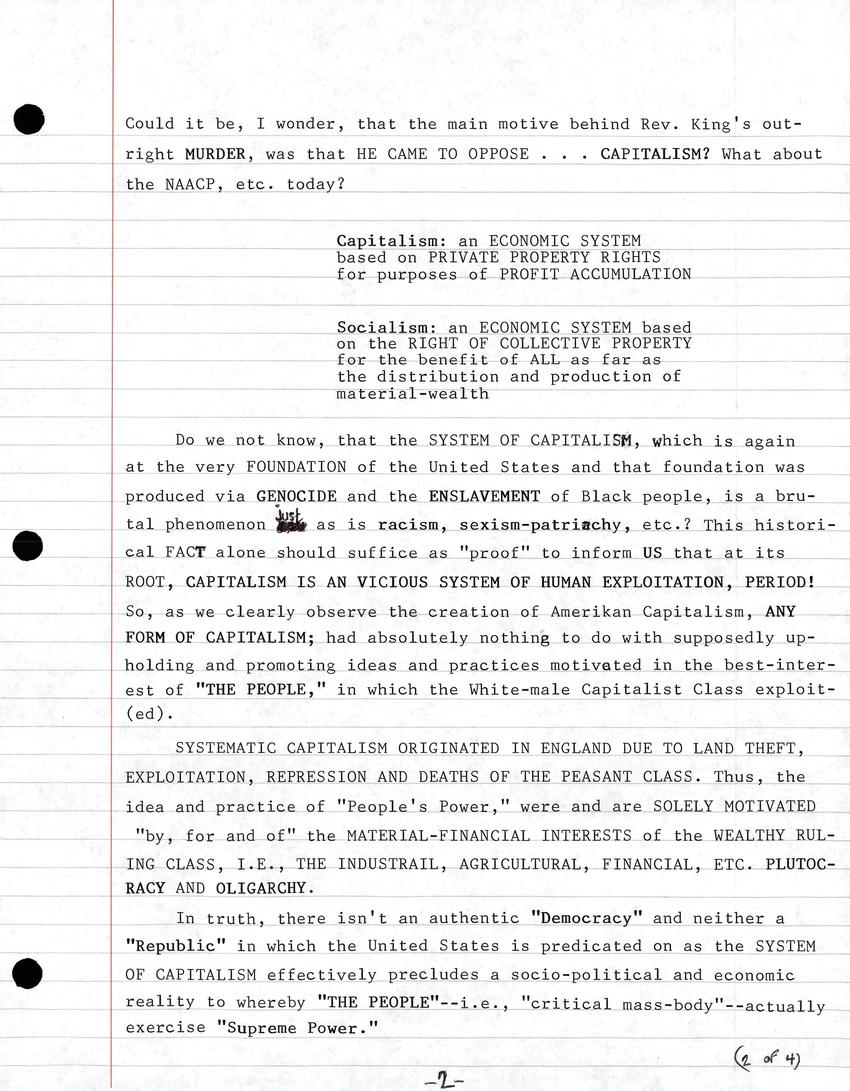 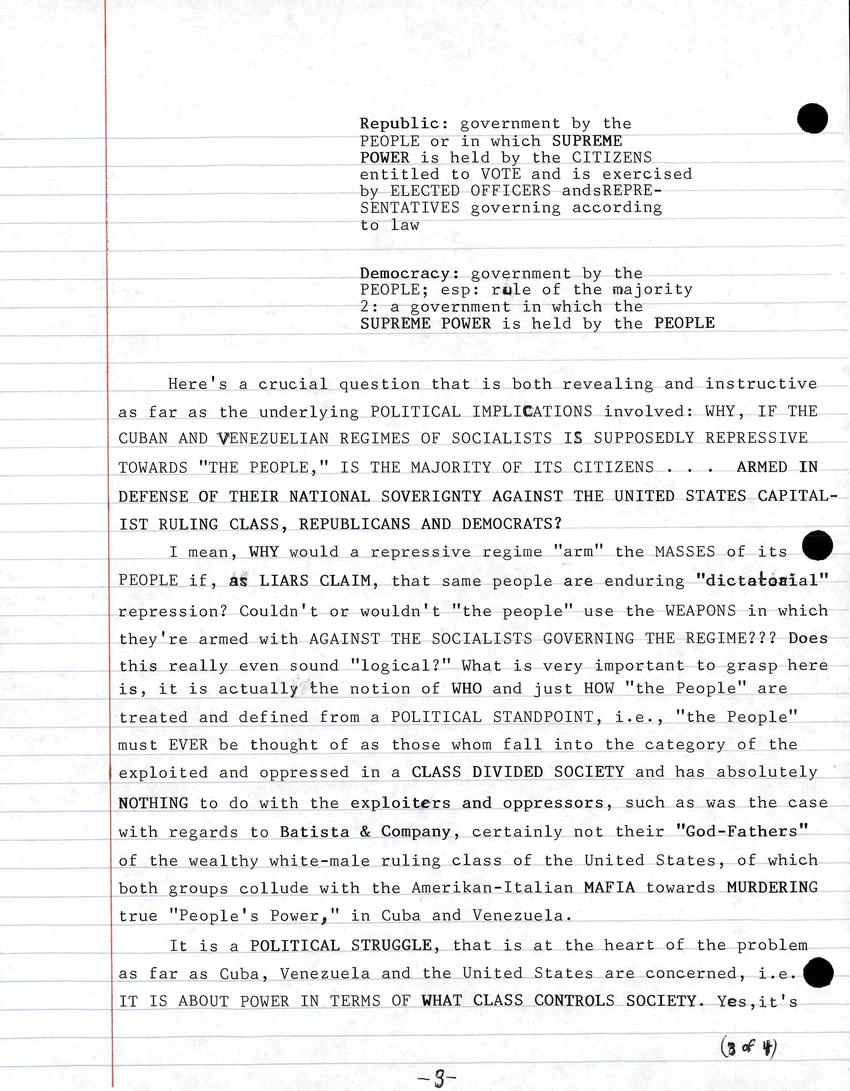 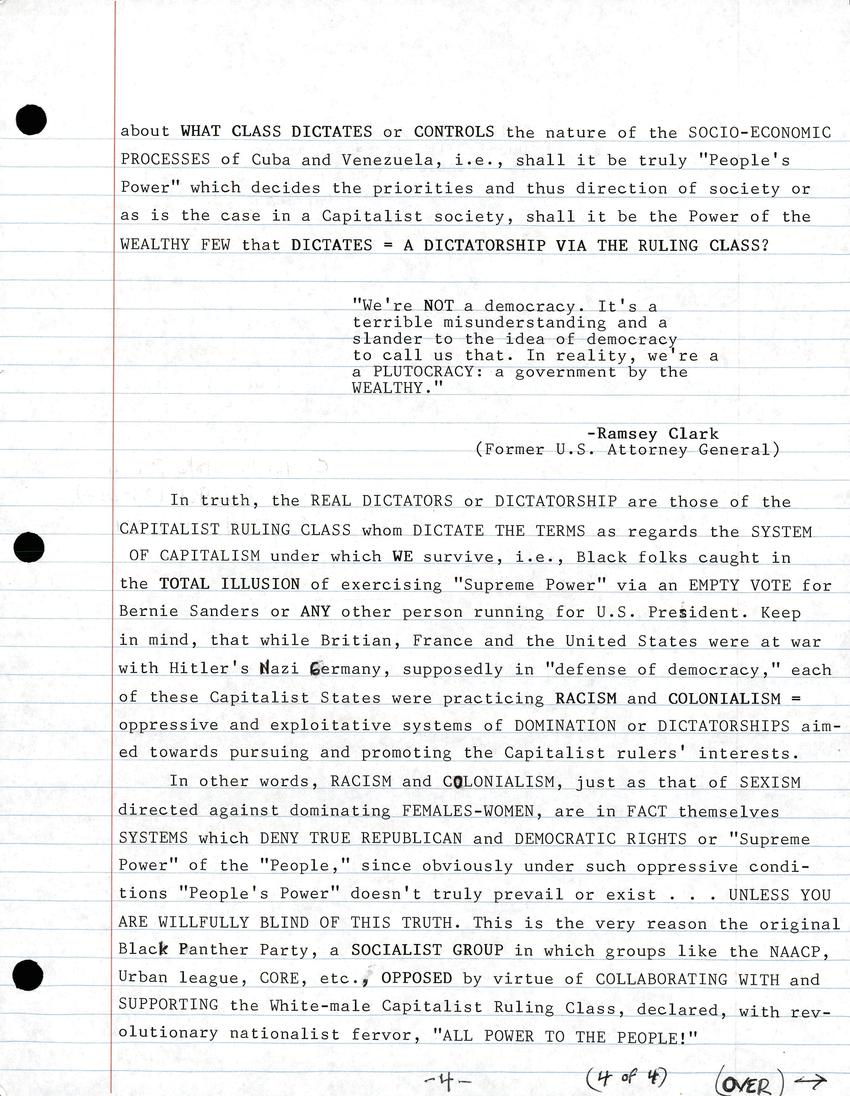 "Capitalism CANNOT reform itself; a SYSTEM that ENSLAVES YOU CANNOT FREE YOU."
-W.E.B. DeBois
(Leader of NAACP)

Quite obviously, the ancestor, W.E.B. DuBois, equated ENSLAVEMENT with the SYSTEM OF CAPITALISM, IN WHICH THE UNITED STATES IS BASED, and concluded, correctly, that is CANNOT REFORM ITSELF. Yet, he and other major proponents of INTEGRATION advocated for and pursued a program rooted in and motivated by an IDEOLOGY and indeed PHILOSOPHICAL OUTLOOK which concerned just THAT!: "REFORM."

In other words, inherent in the "integrationist" ideology and philosophy of W.E.B. DuBois, Fredrick Douglas, Rev. Martin L. King, Jr., etc., is the very ideas and practice which DuBois concluded CANNOT produce or realize TRUE FREEDOM since integrationism is ITSELF a demand for REFORM under or within the SYSTEM OF CAPITALISM.

Dubois made perfect sense as regards the POLITICAL REALITY we're confronted with and yet, he contradicted his own correct "logic" via advocating for and pursuing a REFORMIST PROGRAM = INTEGRATION, even as later in his life DuBois elected to abandon the United States du to believing it couldn't be reformed. What most people don't know or realize is that even the Rev. Martin L. King, Jr. concluded that the SYSTEM OF CAPITALISM could NOT BE REFORMED, as he expressed serious reservations and opposition to the SYSTEM OF CAPITALISM, i.e., he belatedly came to realize that the form of RACISM that oppresses and exploits Black (New Afrikan) people, is the direct product of the CAPITALIST SYSTEM ITSELF as well as being ever motivated by other laws which DEMANDS Wars and PATRIARCHY-SEXISM.

Could it be, I wonder, that the main motive behind Rev. King's outright MURDER, was that HE CAME TO OPPOSE... CAPITALISM? What about the NAACP, etc. today?

Capitalism: and ECONOMIC SYSTEM based on PRIVATE PROPERTY RIGHTS for purposes of PROFIT ACCUMULATION

Socialism: an ECONOMIC SYSTEM based on the RIGHT OF COLLECTIVE PROPERTY for the distribution and production of material-wealth

Do we not know, that the SYSTEM OF CAPITALISM, which is again at the very FOUNDATION of the United States and that foundation was produced via GENOCIDE and the ENSLAVEMENT of Black people, is a brutal phenomenon just as is racism, sexism-patriarchy,etc.? This historical FACT alone should suffice as "proof" to inform US that at its ROOT, CAPITALISM IS AN VICIOUS SYSTEM OF HUMAN EXPLOITATION, PERIOD!So, as we clearly observe the creation of Amerikan Capitalism, ANY FORM OF CAPITALISM; had absolutely nothing to do with supposedly upholding and promoting ideas and practices motivated in the best-interest of "THE PEOPLE," in which the White-male Capitalist exploit(ed).

SYSTEMATIC CAPITALISM ORIGINATED IN ENGLAND DUE TO LAND THEFT, EXPLOITATION, REPRESSION AND DEATHS OF THE PEASANT CLASS. Thus, the idea and practice of "People's Power," were and are SOLELY MOTIVATED "by, for and of" the MATERIAL-FINANCIAL INTERESTS of the WEALTHY RULING CLASS, I.E., THE INDUSTRIAL, AGRICULTURAL, FINANCIAL, ETC. PLUTOCACY AND OLIGARCHY.

In truth, there isn't an authentic "Democracy" and neither a "Republic" in which the United States is predicated on as the SYSTEM OF CAPITALISM effectively precludes a socio-political and economic reality to thereby "THE PEOPLE"--i.e., "critical mass-body"--actually exercise "Supreme Power."

Republic: government by the PEOPLE or in which SUPREME POWER is held by the CITIZENS entitled to VOTE and is exercised by ELECTED OFFICERS and REPRESENTATIVES governing according to law

Here's the crucial question that is both revealing and instructive as far as the underlying POLITICAL IMPLICATIONS involved: WHY, IF THE CUBAN AND VENEZUELAN REGIMES OF SOCIALISTS IS SUPPOSEDLY REPRESSIVE TOWARDS "THE PEOPLE," IS THE MAJORITY OF ITS CITIZENS...ARMED IN DEFENSE OF THEIR NATIONAL SOVEREIGNTY AGAINST THE UNITED STATES CAPITALIST RULING CLASS, REPUBLICANS AND DEMOCRATS?

I mean, WHY would a repressive regime "arm" the MASSES of its PEOPLE if, as LIARS CLAIM, that same people are enduring "dictational" repression? Couldn't or wouldn't "the people" use the WEAPONS in which they're armed with AGAINST THE SOCIALISTS GOVERNING THE REGIME??? Does this really even sound "logical?" What is very important to grasp here is, it is actually the notion of WHO and just HOW "the People" are treated and defined from a POLITICAL STANDPOINT, i.e., "the People" must EVER be thought of as those whom fall into the category of the exploited and oppressed in a CLASS DIVIDED SOCIETY and has absolutely NOTHING to do with the exploiters and oppressors, such as was the case with regards to Batista & Company, certainly not their "God-Fathers" of the wealthy white-male ruling class of the United States, of which both groups collude with the Amerikan-Italian MAFIA towards MURDERING true "People's Power," in Cuba and Venezuela.

It is a POLITICAL STRUGGLE, that is at the heart of the problem as far as Cuba, Venezuela and the United States are concerned, i.e. IT IS ABOUT POWER IN TERMS OF WHAT CLASS CONTROLS SOCIETY. Yes, it's about WHAT CLASS DICTATES or CONTROLS the nature of the SOCIO-ECONOMIC PROCESSES of Cuba and Venezuela, i.e., shall it be truly "People's Power" which decides the priorities and thus direction of society or as is the case in a Capitalist society, shall it be the Power of the WEALTHY FEW that DICTATES = A DICTATORSHIP VIA THE RULING CLASS?

"We're NOT a democracy. It's a terrible misunderstanding and a slander to the idea of democracy to call us that. In reality, we're a PLUTORACY: a government by the WEALTHY."
-Ramsey Clark (Former U.S. Attorney General)

In truth, the REAL DICTATORS or DICTATORSHIP are those of the CAPITALIST RULING CLASS whom DICTATE THE TERMS as regards the SYSTEM OF CAPITALISM under which WE survive, i.e., Black folks caught in the TOTAL ILLUSION of exercising "Supreme Power" via an EMPTY VOTE for Bernie Sanders or ANY other person running for U.S. President. Keep in mind, that while Britain, France, and the United States were at war with Hitler's Nazi Germany, supposedly in "defense of democracy," each of these Capitalist States were practicing RACISM and COLONIALISM = oppressive and exploitative systems of DOMINATION or DICTATORSHIPS aimed towards pursuing and promoting the Capitalist rulers' interests.

In other words, RACISM and COLONIALISM, just as that of SEXISM directed against dominating FEMALES-WOMEN, are in FACT themselves SYSTEMS which DENY TRUE REPUBLICAN and DEMOCRATIC RIGHTS or "Supreme Power" of the "People," since obviously under such oppressive conditions "People's Power" doesn't truly prevail or exist...UNLESS YOU ARE WILLFULLY BLIND OF THIS TRUTH. This is the very reason the original Black Panther Party, a SOCIALIST GROUP in which groups like NAACP, Urban leugue, CORE, etc., OPPOSED by virtue of COLLABORATING WITH and SUPPORTING the White-male Capitalist Ruling Class, declared, with revolutionary nationalist frevor, "ALL POWER TO THE PEOPLE!"

Thanks for writing! I finished the transcription for your post. That was hands down the most I've ever used my caps lock, but it was also really fascinating to see what you had to say. Don't stop your research and don't stop talking :)