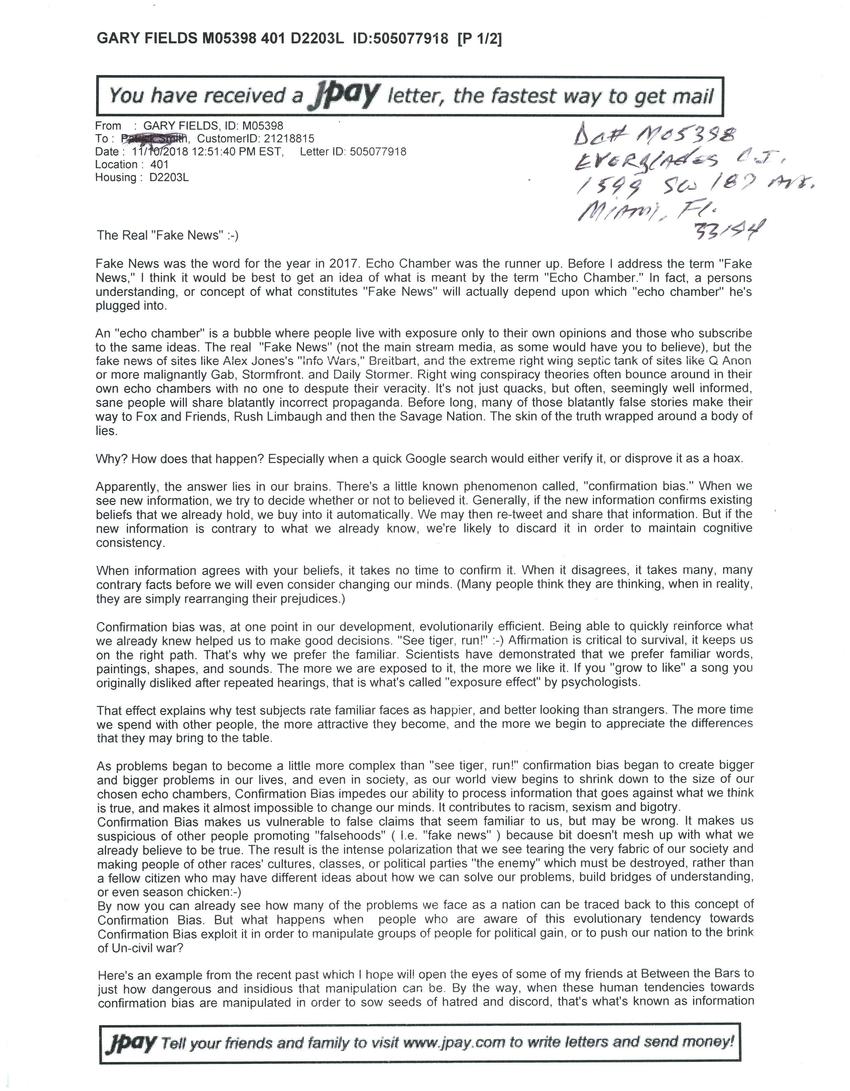 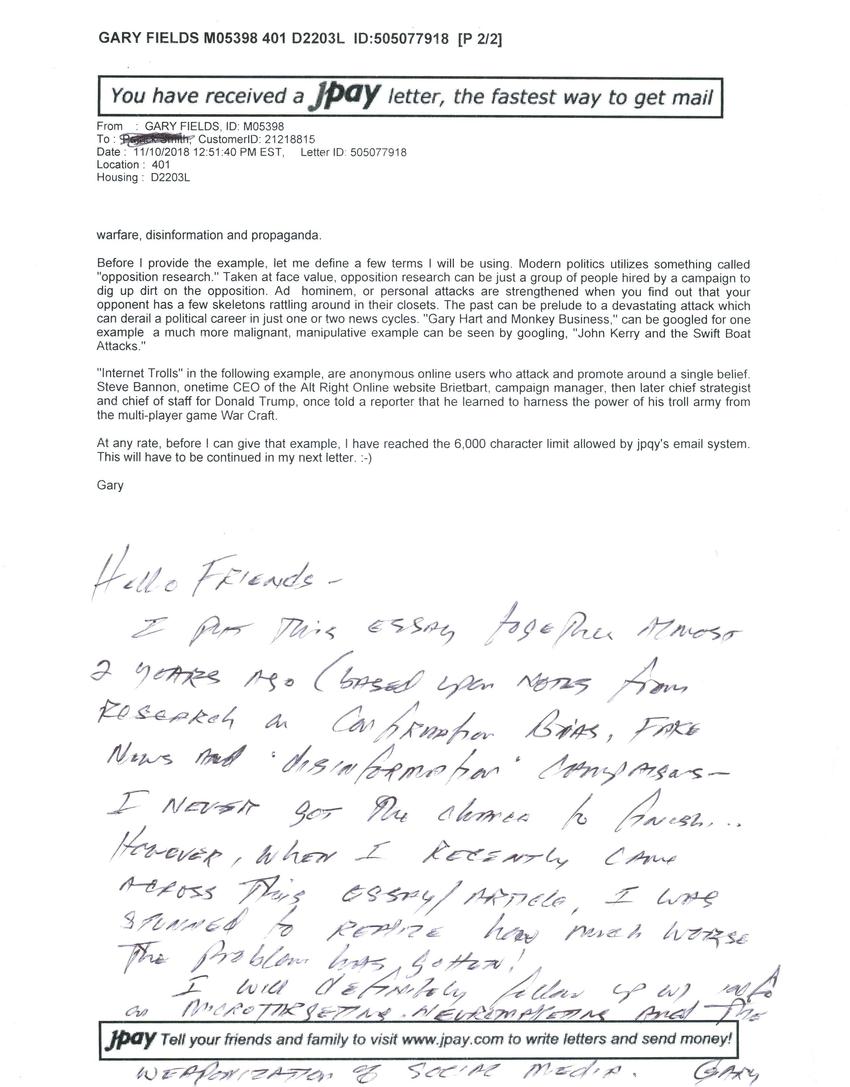 Fake News was the word for the year in 2017. Echo Chamber was the runner up. Before I address the term "Fake News," I think it would be best to get an idea of what is meant by the term "Echo Chamber." In fact, a persons understanding, or concept of what constitutes "Fake News" will actually depend upon which "echo chamber" he's plugged into.

An "echo chamber" is a bubble where people live with exposure to only their own opinions and those who subscribe to the same ideas. The real "Fake News"(not the main stream media, as some would have you to believe), but the fake news of sites like Alex Jone's "Info Wars," Breitbart, and the extreme right wing septic tank of sites like Q Anon or more malignantly Gab, Stormfront, and Daily Stormer. Right wing conspiracy theories often bounce around in their own echo chambers with no one to dispute their veracity. It's not just quacks, but often, seemingly well informed, sane people will share blatantly incorrect propaganda. Before long, many of those blatantly false stories make their way to Fox and Friends, Rush Limbaugh and then the Savage Nation. The skin of the truth wrapped around a body of lies.

Why? How does that happen? Especially when a quick Google search would either verify it, or disprove it as a hoax.

When information agrees with your beliefs, it takes no time to confirm it, When it disagrees it makes many, many contrary facts before we even consider changing our minds. (Many people think they are thinking, when in reality, they are simply rearranging their prejudices.)

confirmation bias was, at one point in our development, evolutionarily efficient. Being able to quickly reinforce what we already know helped us make good decisions. "See tiger, run!" :-) Affirmation is critical to survival, it keeps us on the right path. That's why we prefer the familiar. Scientists have demonstrated that we prefer familiar words, paintings, shapes, and sounds. The more we are exposed to it, the more we like it. If you "grow to like" a song you originally disliked after repeated hearings, that is what's called "exposure effect" by psychologists.

That effect explains why test subjects rate familiar faces as happier, and better looking than strangers. the more time we spend with other people, the more attractive they become, and the more we begin to appreciate the differences that they may bring to the table.

As problems began to become a little more complex that "see tiger, run!" confirmation bias began to create bigger and bigger problems in our lives, and even in society, as our world view begins to shrink down to the size of our chose echo chambers, Confirmation Bias impedes our ability to process information that goes against what we think is true, and makes it almost impossible to change our minds. It contributes to racism, sexism and bigotry. Confirmation bias makes us vulnerable to false claims that seem familiar to us, but may be wrong. It makes us suspicious of other people promoting "falsehoods" (i.e. "fake news") because bit doesn't mesh up with what we already believe to be true. Thes result is the intense polarization that we see tearing the very fabric of our society and making people of other races' cultures, classes, or political parties "the enemy" which must be destroyed, rather than a fellow citizen who may have different ideas about how we can solve our problems, build bridges of understanding, or even season chicken :-)
By now you can already see how many of the problems we face as a nation can be traced back to this concept of Confirmation Bias. But what happens when people who area aware of this evolutionary tendency towards Confirmation Bias exploit it in order to manipulate groups of people for political gain, or to push our nation to the brink of Un-civil war?

Here's an example from the recent past which I hope will open the eyes of some of my friends at Between the Bars to just how dangerous and insidious that manipulation can be, By the way, when these human tendencies towards confirmation bias are manipulated in order to sow seeds of hatred and discord, that's wheat's known as information warfare, disinformation and propaganda.

Before I provide the example, let me define a few terms I will be using. Modern politics uses something called "opposition research." Taken at face value, opposition research can be just a group of people hired to dig up dirt on the opposition. Ad hominem, or person attacks are strengthened when you find out that your opponent has a few skeletons rattling around in their closets. The past can be prelude to a devastating attack which can derail a political career in just one or two news cycles. "Gary Hart and Monkey Business," can be googled for one example a much more malignant, manipulative example can be seen by googling, "John Kerry and the Swift Boat Attacks.'

"Internet Trolls" in the following example, are anonymous online users who attack and promote around a single belief. Steve Bannon, onetime CEO of the Alt Right Online website Breitbart, campaign manager, then later chief strategist and chief of staff for Donald Trump, once told a reporter that he learned to harness the power of his troll away from the multi-player game War Craft.

At any rate, before I can give that example, I have reached the 6,000 character limit allowed by jpqy's email system. This will have to be continued in my next letter. :-)

Hello Friends -
I put this essay together almost 2 years ago (based upon notes from research on Confirmation Bias, Fake News and 'disinformation' consprisas -I never got the chance to finish... However, when I recently came across This essay/article. I was stunned to realize how much worse The Problem has gotten!
I will definitely follow up w/ info on microtargeting neuromarketing and the weaponization of social media. Gary