The Great Experiment: Our Constitution 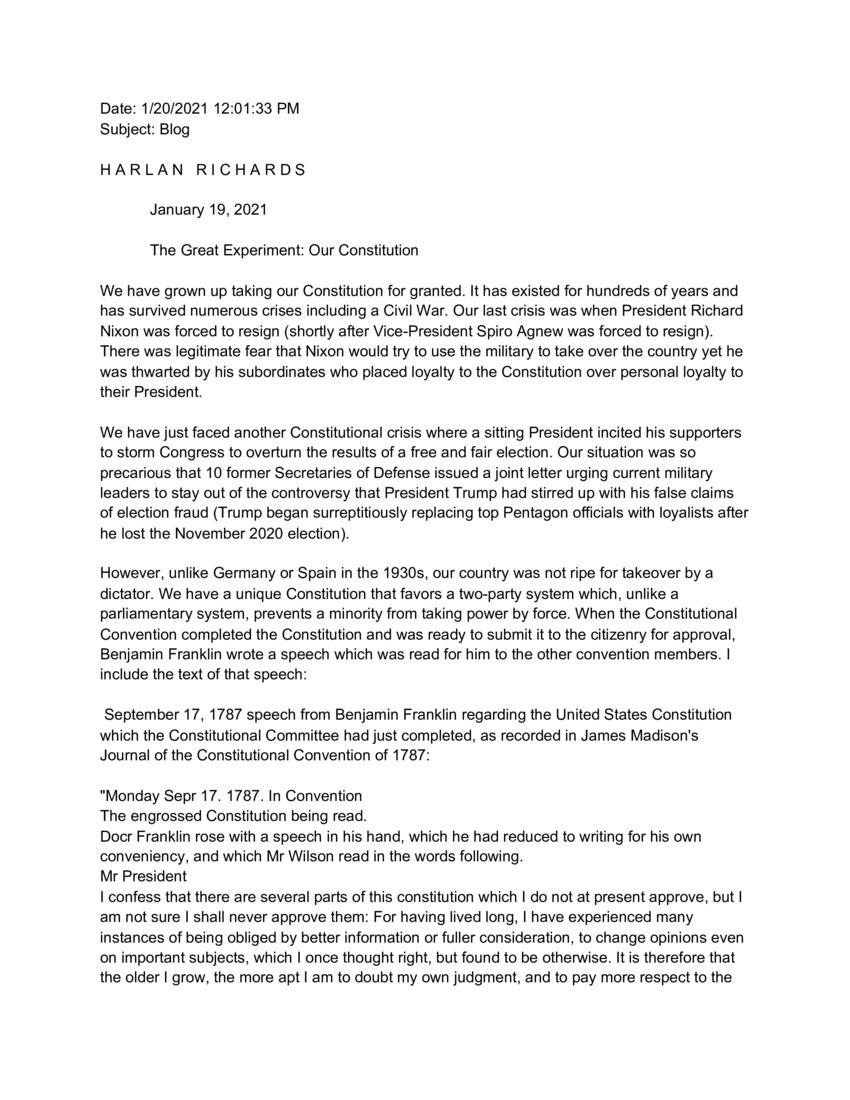 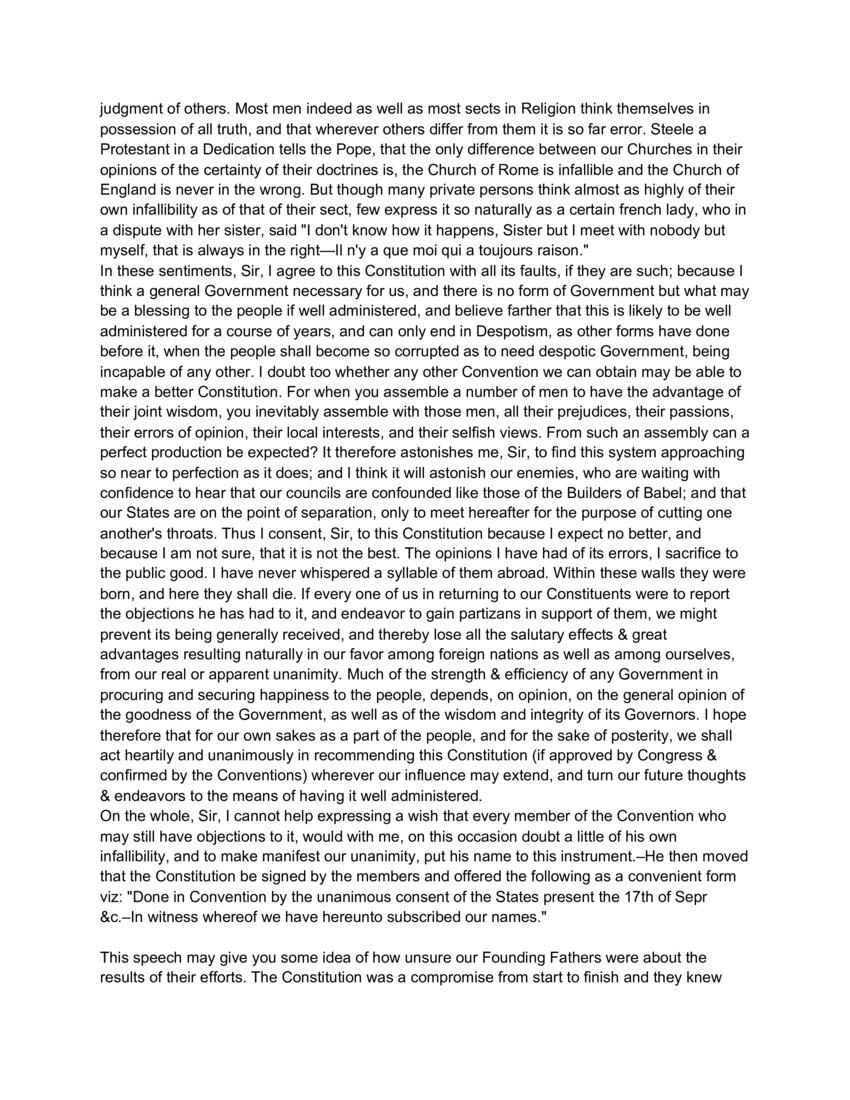 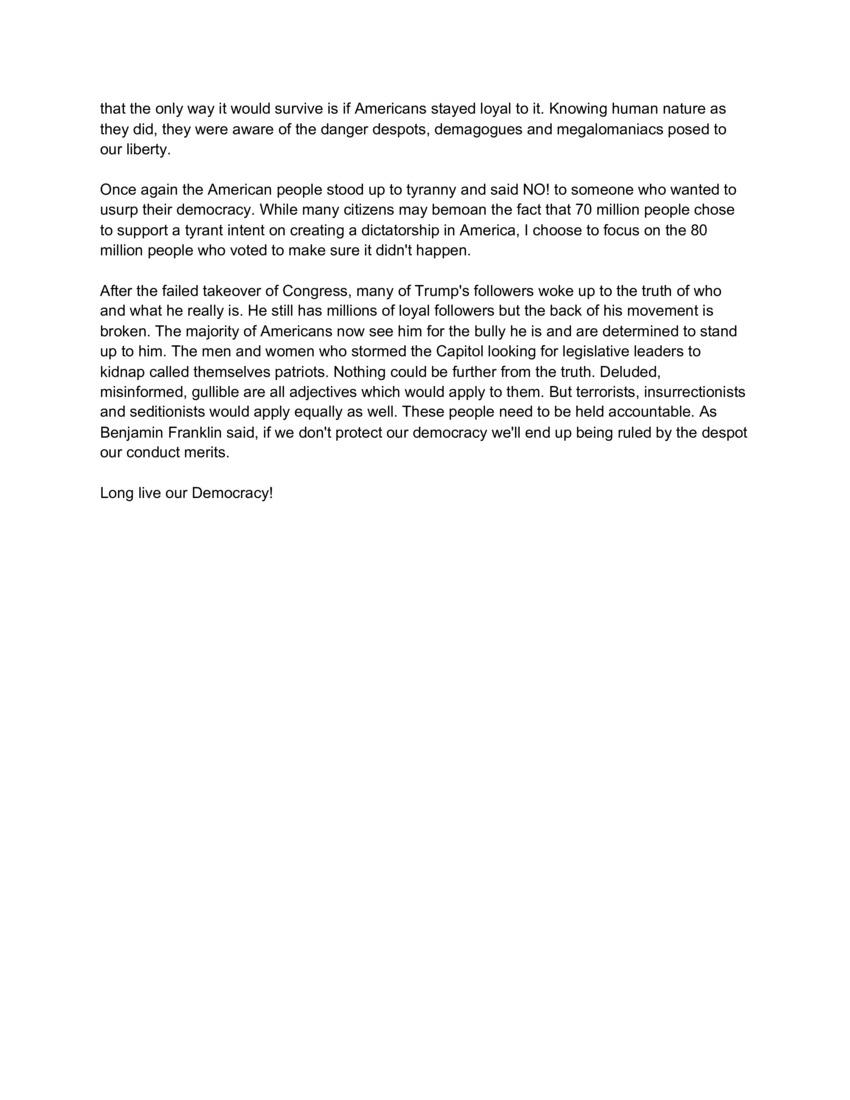 The Great Experiment: Our Constitution

We have grown up taking our Constitution for granted. It has existed for hundreds of years and
has survived numerous crises including a Civil War. Our last crisis was when President Richard
Nixon was forced to resign (shortly after Vice-President Spiro Agnew was forced to resign).
There was legitimate fear that Nixon would try to use the military to take over the country yet he
was thwarted by his subordinates who placed loyalty to the Constitution over personal loyalty to
their President.

We have just faced another Constitutional crisis where a sitting President incited his supporters
to storm Congress to overturn the results of a free and fair election. Our situation was so
precarious that 10 former Secretaries of Defense issued a joint letter urging current military
leaders to stay out of the controversy that President Trump had stirred up with his false claims
of election fraud (Trump began surreptitiously replacing top Pentagon officials with loyalists after
he lost the November 2020 election).

However, unlike Germany or Spain in the 1930s, our country was not ripe for takeover by a
dictator. We have a unique COnstitution that favors a two-party system which, unlike a
parliamentary system, prevents a minority from taking power by force. When the Constitutional
Convention completed the Constitution and was read for him to the other convention members. I
include the text of that speech:

"Monday Sepr 17. 1787. In Convention
The engrossed Constitution being read.
Docr Franklin rose with a speech in his hand, which he had reduced to writing for his own
conveniency, and which Mr. Wilson read in the words following.
Mr. President
I confess that there are several parts of this constitution which I do not at present approve, but I
am not sure I shall never approve them: For having lived long, I have experienced many
instances of being obliged by better information or fuller consideration, to change opinions even
on important subjects, which I once thought right, but found to be otherwise. It is therefore that
the older I grow, the more apt I am to doubt my own judgment, and to pay more respect to the
judgment of others. Most men indeed as well as most sects in Religion think themselves in
possession of all truth, and that wherever others differ from them it is so far error. Steele, a
Protestant in a Dedication tells the Pope, that the only difference between our Churches in their
opinions of the certainty of their doctrines is, the Church of Rome is infallible and the Church of
England is never in the wrong. But though many private persons think almost as highly of
their own infallibility as that of their sect, few express it so naturally as a certain French lady, who in
a dispute with her sister, said "I don't know how it happens, Sister but I meet with nobody but
myself, that is always in the right-- Il n'y a que moi qui a toujours raison."

In these sentiments, Sir, I agree to this COnstitution with all its faults, if they are such; because I
think a general Government necessary for us, and there is no form of Government but what may
be a blessing to the people if well administered, and believe farther that this is likely to be well
administered for a course of years, and can only end in Despotism, as other forms have done
before it, when the people shall become so corrupted as to need despotic Government, being
incapable of any other. I doubt too whether any other Convention we can obtain may be able to
make a better Constitution. For when you assemble a number of men to have the advantage of
their joint wisdom, you inevitable assemble with those men, all their prejudices, their passions,
their errors of opinion, their local interests, and their selfish views. From such an assembly can a
perfect production be expected? It therefore astonishes me, Sir, to find this system approaching
so near to perfection as it does; and I think it will astonish our enemies, who are waiting with
confidence to hear that our councils are confounded like those of the Builders of Babel; and that
our States are on the point of separation, only to meet hereafter for the purpose of cutting one
another's throats. Thus I consent, Sirt, to this Constitution because I expect no better, and
because I am not sure, that it is not the best. The opinions I have had of its errors, I sacrifice to
the public good. I have never whispered a syllable of them abroad. Within these walls they were
born, and here they shall die. If every one of us in returning to our Consituents were to report
the objections he has had to do it, and endeavor to gain partisans in support of them, we might
prevent its being generally received, and thereby lose all the salutary effects & great
advantages resulting naturally in our favor among foreign nations as well as among ourselves,
from our real or apparent unanimity. Much of the strength & efficiency of any Government in
procuring and securing happiness to the people, depends, on opinion on the general opinion of
the goodness of the Government, as well as of the wisdom and integrity of its Governors. I hope
therefore that for our own sakes as a part of the people, and for the sake of posterity, we shall
act heartily and unanimously in recommending this COnstitution (if approved by Congress &
confirmed by the Conventions) wherever our influence may extend, and turn our future thoughts
& endeavors to the means of having it well administered.

On the whole, Sir, I cannot help expressing a wish that every member of the Convention who
may still have objections to it, would with me, on this occasion doubt a little of his own
infallibility, and to make manifest our unanimity, put his name to this instrument.- He then moved
that the Constitution be signed by the membered and offered the following as a convenient form
viz: "Done in Convention by the unanimous consent of the States present the 17th of Sepr
&c.-In witness whereof we have hereunto subscribed our names."

This speech may give you some idea of how unsure our Founding Fathers were about the
results of their efforts. The Constitution was a compromise from start to finish and they knew
that the only way it would survive is if Americans stayed loyal to it. Knowing human nature as
they did, they were aware of the danger despots, demagogues, and megalomaniacs posed to
our liberty.

Once again the American people stood up to tyranny and said NO! to someone who wanted to usurp their democracy. While many citizens may bemoan the fact that 70 million people chose to support a tyrant intent on creating a dictatorship in America, I chose to focus on the 80 million who voted to make sure it didn't happen.

After the failed takeover of Congress, many of Trump's followers woke up to the truth of who and what he really is. He still has millions of loyal followers but the back of his movement is broken. The majority of Americans now see him for the bully he is and are determined to stand up to him. The men and women who stormed the Capitol looking for legislative leaders to kidnap called themselves patriots. Nothing could be further from the truth. Deluded, misinformed, gullible are all adjectives which would apply to them. But terrorists, insurrectionists and seditionists would apply equally as well. These people need to be held accountable. As Benjamin Franklin said, if we don't protect our democracy we'll end up being ruled by the despot our conduct merits.