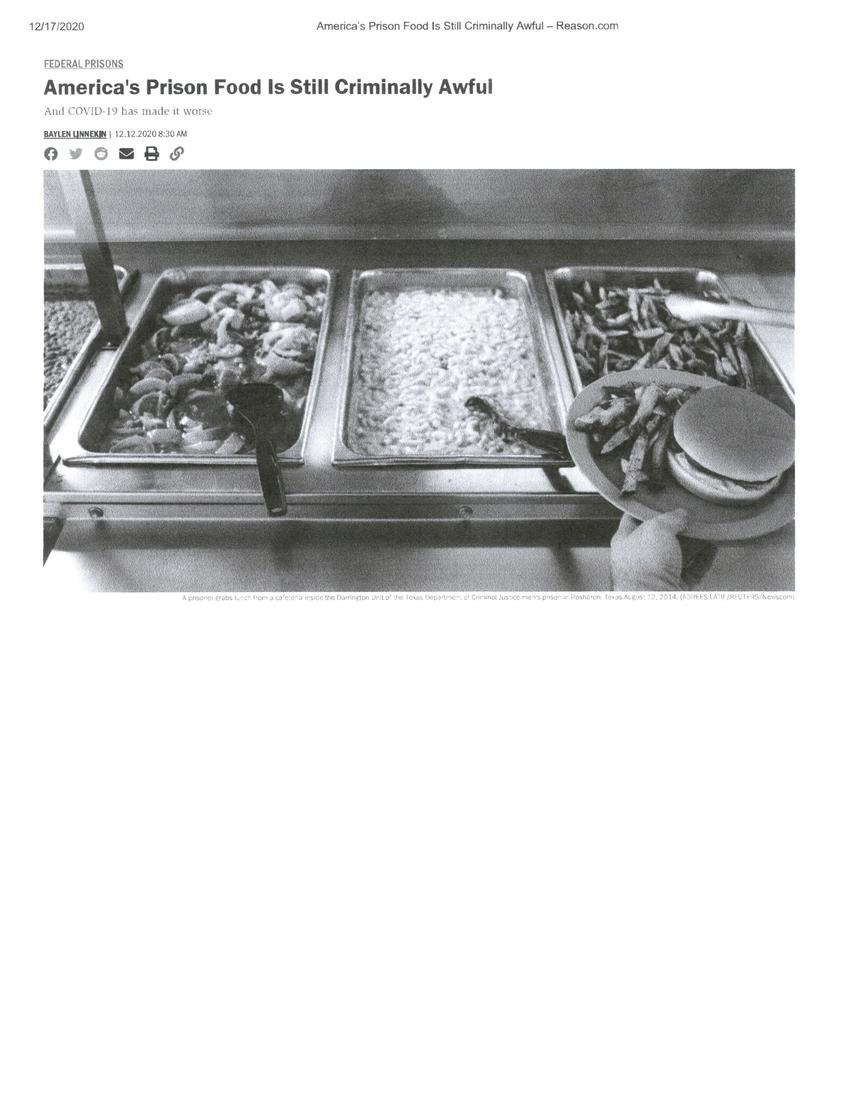 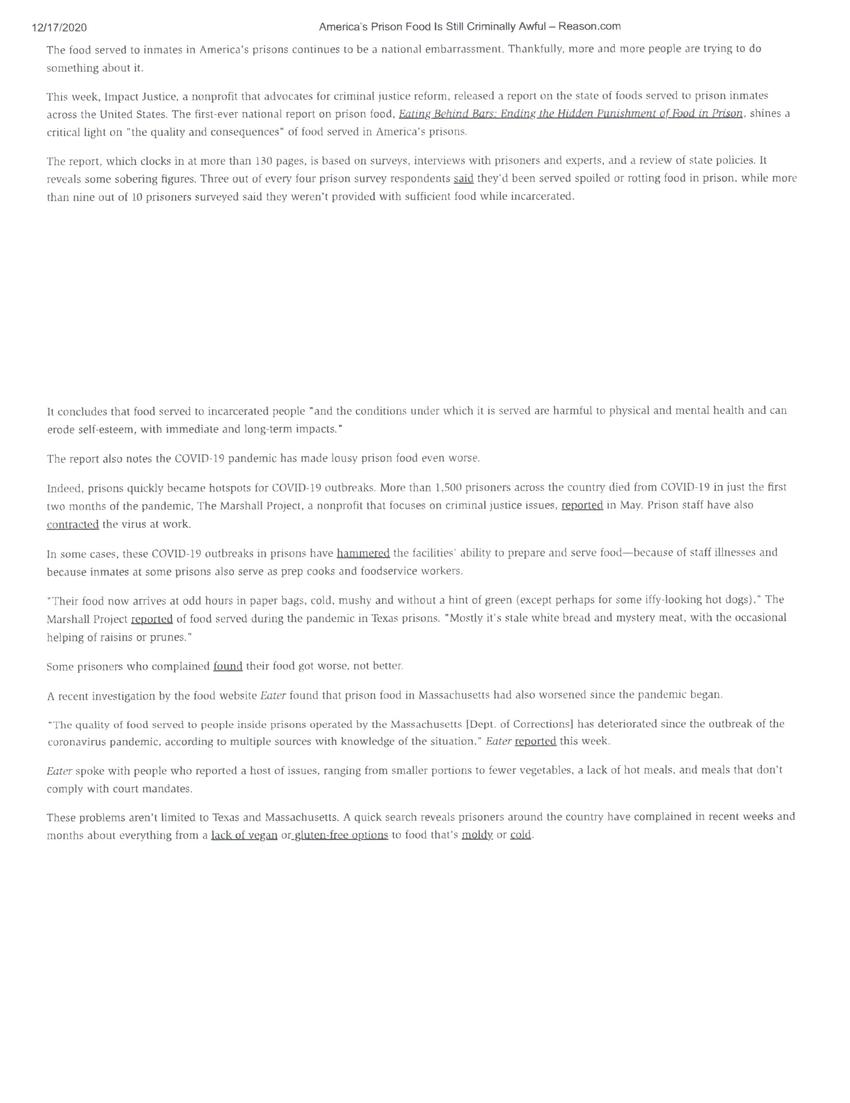 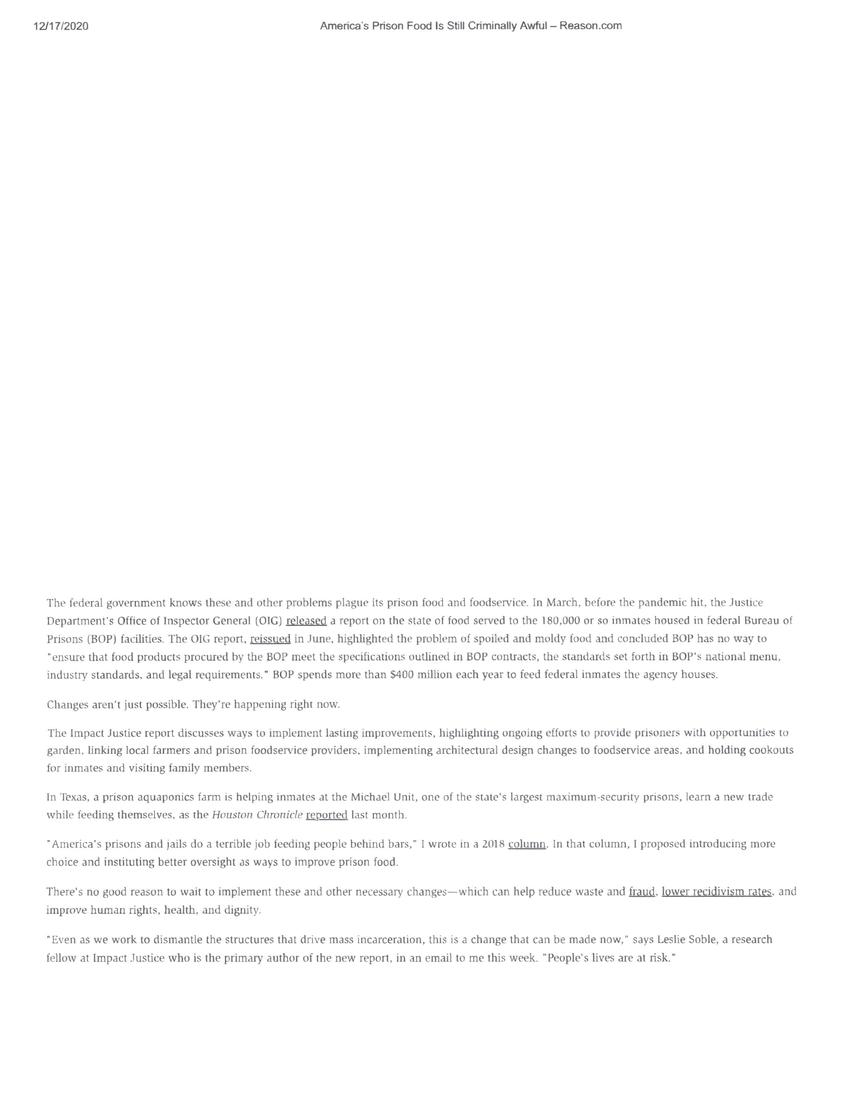 America's Prison Food is Still Criminally Awful
And Covid 19 has made it worse.
By Bayleen Linnexin 12/12/2020

The food served to inmates in America's prisons continues to be a national embarrassment. Thankfully, more and more people are trying to do something about it.

This week, Impact Justice, a nonprofit that advocates for criminal justice reform, released a report on the state of foods served to prison inmates across the United States. The first ever national report on prison food, 'Eating Behind Bars: Ending the Hidden Punishment of Food in Prison,' shines a critical light n the "quality and consequences" of food served in America's prisons.

The report, which clocks in at more than 130 pages, is based on surveys, interviews with prisoners and experts, and a review of state policies. It reveals some sobering figures. Three out of every four respondents SAID they'd been served spoiled or rotting food in prison, which more than nine out of 10 prisoners surveyed said they weren't provided with sufficient food while incarcerated. It concludes that food served to incarcerated people "and the conditions under which it is served are harmful to physical and mental health and can erode self-esteem, with immediate and long term impacts."

The report also notes the COVID-19 pandemic has made lousy prison food even worse.

Indeed, prisons quickly became hotspots for COVID-19 outbreaks. More than 1,500 prisoners from across the country died from COVID-19 in just the first two months of the pandemic. The Marshall Project, a nonprofit that focuses on criminal justice issues, reported in May. Prison staff has also contracted the virus at work.

In some cases, these COVID-19 outbreaks in prison have hammered the facilities' ability to prepare and serve food-because of staff illnesses and because inmates at some prisons also serve as prep cooks and food service workers. "Their food now arrives at odd hours in paper bags, mushy, and without a hint of green (except for some iffy looking hot dogs)." The Marshall Project reported of food served during the pandemic in Texas prisons. "Mostly it's stale bread and mystery mean with the occasional helping of raisins or prunes."

Some prisoners who complained found their food got worse, not better. A recent investigation by the food website 'Eater' found that food in Massachusetts had also worsened since the pandemic began. "The quality of food served to people inside prisons operated by the Massachusetts [Department of Corrections] has deteriorated since the outbreak of the coronavirus pandemic, according to multiple sources with knowledge of the situation." 'Eater' reported this week. Eater spoke with people who reported a host of issues, ranging from smaller portions to fewer vegetables, a lack of hot meals, and meals that don't comply with court mandates.

These problems aren't limited to Texas and Massachusetts. A quick search reveals prisoners around the country have complained in recent weeks and months about everything from a lack of vegan or gluten-free options to food that's moldy, or cold.

The federal government knows these and other problems plague its prison food and foodservice. In Mary, before the pandemic hit, the Justice Department's Office of the Inspector General (OIG) released a report on the state of food served to the 180,000 or so inmates housed in federal Bureau of Prisons (BOP) facilities. The OIG report, reissued in June, highlighted the problems of spoiled and moldy food and concluded BOP has no way to "ensure that food products procured by the BOP meet the specifications outlines in BOP contracts, the standards set forth in BOP's national menu, industry standards, and legal requirements." BOP spends more than $400 million each year to feed federal inmates the agency houses.

In Texas, a prison aquaponics farm is helping inmates at the Michael Unity, not elf the state's largest maximum-security prisons, learn a new trade while feeding themselves as the 'Houston Chronicle' reported last month. "America's prisons and jails do a terrible job at feeding people behind bars." I wrote in a 2018 column. In the column, I proposed introducing more choice and instituting better insight as ways to improve prison food. There's no good reason to wait to implement theses and other necessary changes-which can help reduce waste and fraud, lower recidivism rates and improve human rights, health, and dignity. "Even as we work to dismantle the structures that drive masss incarceration, this is a change that can me made now," says Leslie Soble, a research fellow at Impact Justice who is the primary author of the new report, in a an email to me this week, "Peoples lives are at risk."

Thanks for writing! I finished the transcription for your post. Praying for improved food. John
I feel terrible for how terrible the prison food is. I hope something is done about this. Nobody deserves disgusting food like that, every human deserves three solid nutritious meals per day.
(scanned reply – view as blog post)
uploaded March 13, 2021.  Original (PDF) 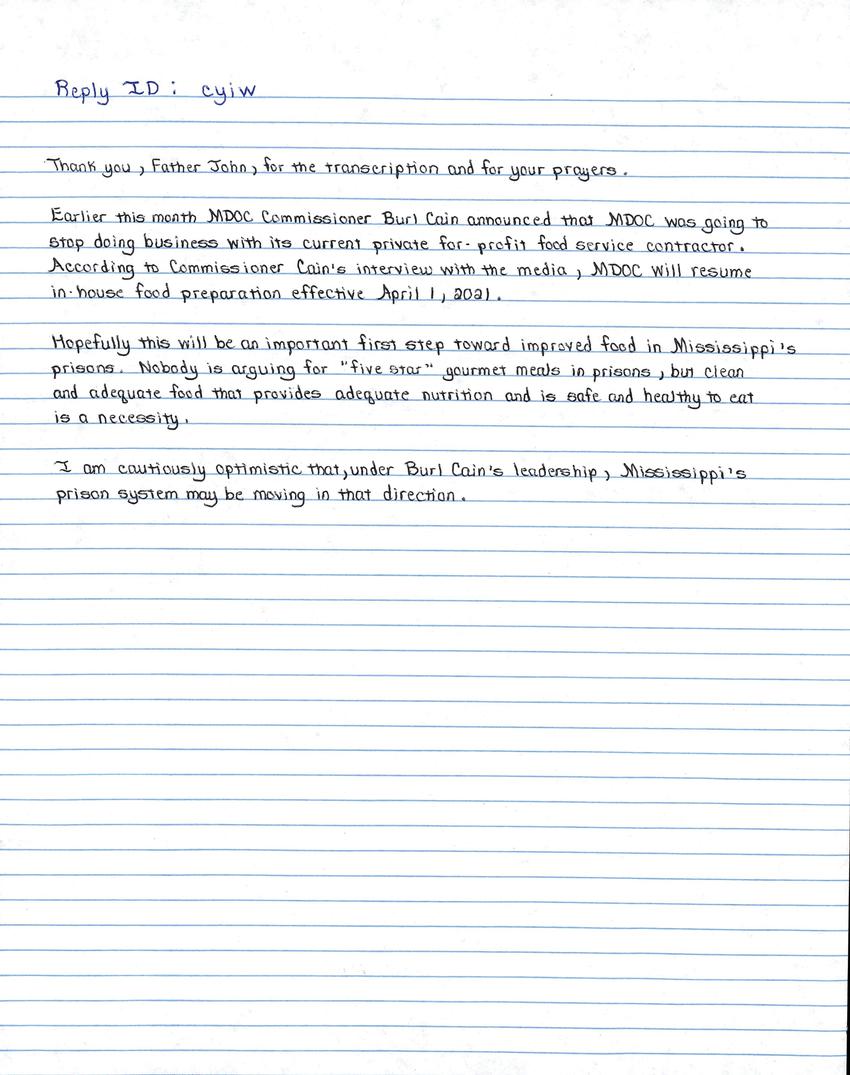 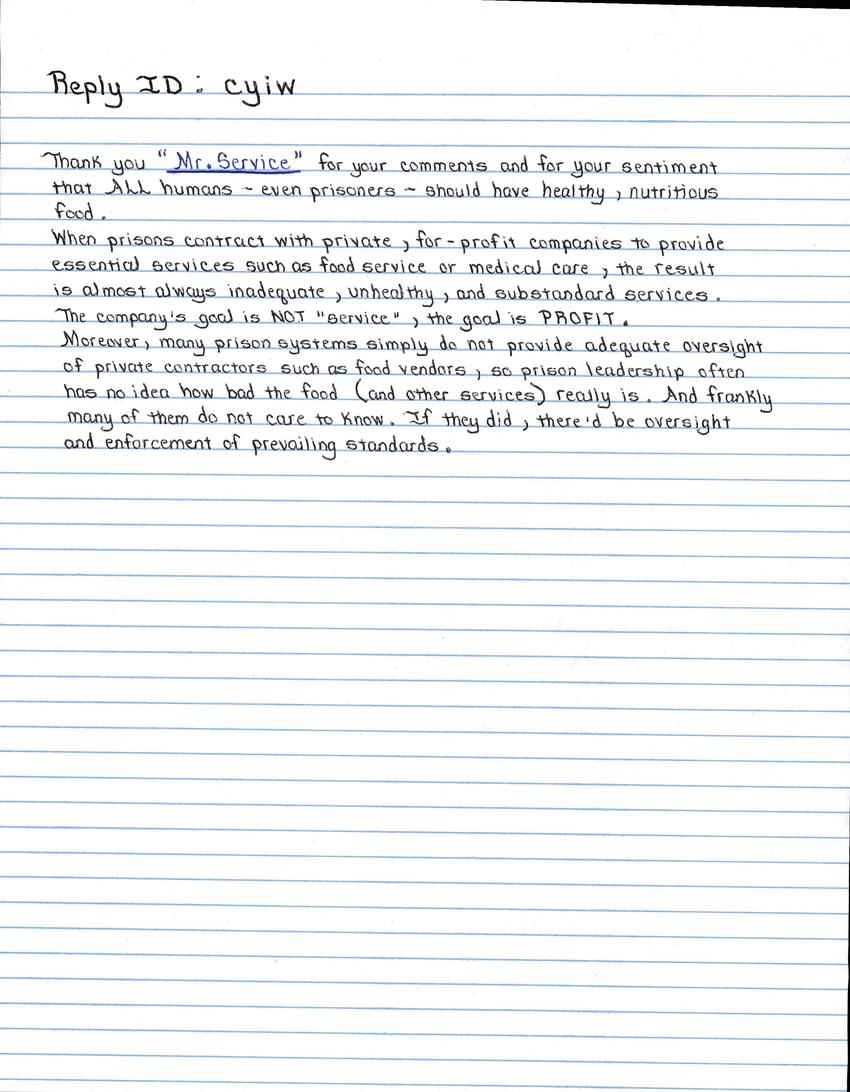