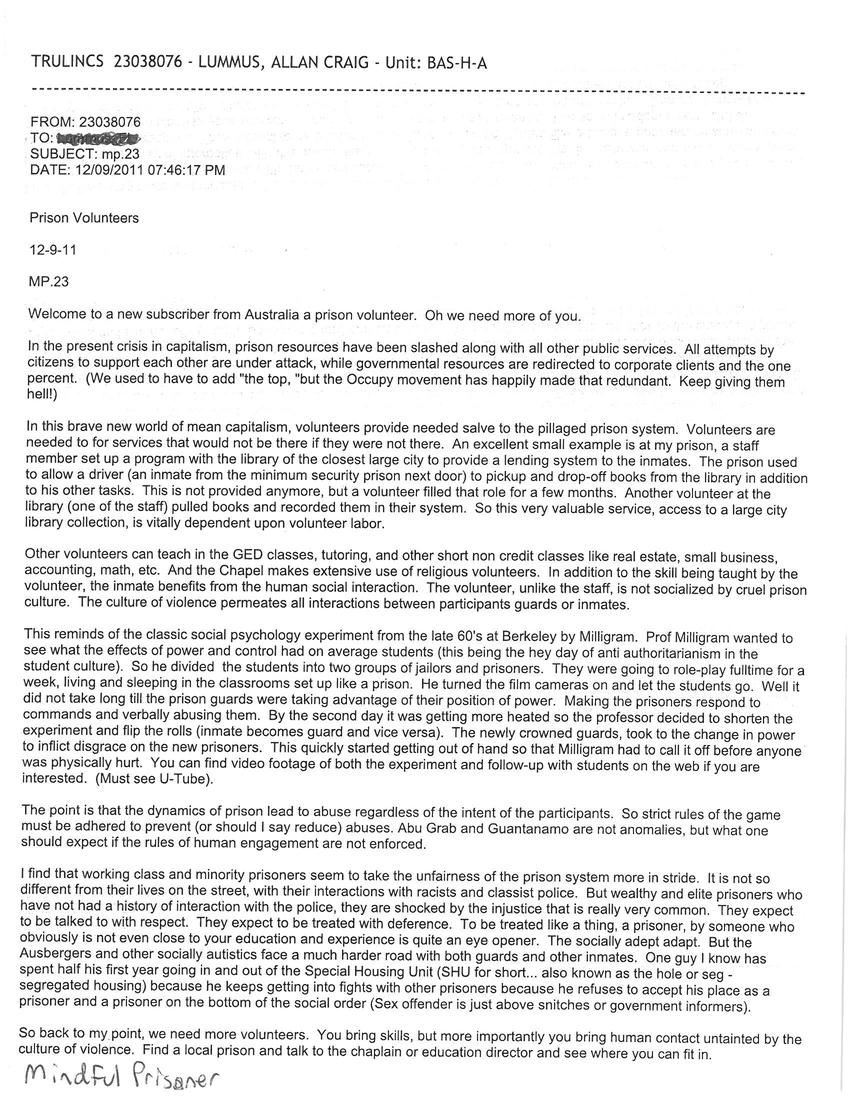 Welcome to a new subscriber from Australia a prison volunteer. Oh we need more of you.

In the present crisis in capitalism, prison resources have been slashed along with all other public services. All attempts by citizens to support each other are under attack, while governmental resources are redirected to corporate clients and the one percent. (We used to have to add "the top, "but the Occupy movement has happily made that redundant. Keep giving them hell!)

In this brave new world of mean capitalism, volunteers provide needed salve to the pillaged prison system. Volunteers are needed to for services that would not be there if they were not there. An excellent small example is at my prison, a staff member set up a program with the library of the closest large city to provide a lending system to the inmates. The prison used to allow a driver (an inmate from the minimum security prison next door) to pickup and drop-off books from the library in addition to his other tasks. This is not provided anymore, but a volunteer filled that role for a few months. Another volunteer at the library (one of the staff) pulled books and recorded them in their system. So this very valuable service, access to a large city library collection, is vitally dependent upon volunteer labor.

Other volunteers can teach in the GED classes, tutoring, and other short non credit classes like real estate, small business, accounting, math, etc. And the Chapel makes extensive use of religious volunteers. In addition to the skill being taught by the volunteer, the inmate benefits from the human social interaction. The volunteer, unlike the staff, is not socialized by cruel prison culture. The culture of violence permeates all interactions between participants guards or inmates.

This reminds of the classic social psychology experiment from the late 60's at Berkeley by Milligram. Prof Milligram wanted to see what the effects of power and control had on average students (this being the hey day of anti authoritarianism in the student culture). So he divided the students into two groups of jailors and prisoners. They were going to role-play fulltime for a week, living and sleeping in the classrooms set up like a prison. He turned the film cameras on and let the students go. Well it did not take long till the prison guards were taking advantage of their position of power. Making the prisoners respond to commands and verbally abusing them. By the second day it was getting more heated so the professor decided to shorten the experiment and flip the rolls (inmate becomes guard and vice versa). The newly crowned guards, took to the change in power to inflict disgrace on the new prisoners. This quickly started getting out of hand so that Milligram had to call it off before anyone was physically hurt. You can find video footage of both the experiment and follow-up with students on the web if you are interested. (Must see U-Tube).

The point is that the dynamics of prison lead to abuse regardless of the intent of the participants. So strict rules of the game must be adhered to prevent (or should I say reduce) abuses. Abu Grab and Guantanamo are not anomalies, but what one should expect if the rules of human engagement are not enforced.

I find that working class and minority prisoners seem to take the unfairness of the prison system more in stride. It is not so different from their lives on the street, with their interactions with racists and classist police. But wealthy and elite prisoners who have not had a history of interaction with the police, they are shocked by the injustice that is really very common. They expect to be talked to with respect. They expect to be treated with deference. To be treated like a thing, a prisoner, by someone who obviously is not even close to your education and experience is quite an eye opener. The socially adept adapt. But the Ausbergers and other socially autistics face a much harder road with both guards and other inmates. One guy I know has spent half his first year going in and out of the Special Housing Unit (SHU for short... also known as the hole or seg - segregated housing) because he keeps getting into fights with other prisoners because he refuses to accept his place as a prisoner and a prisoner on the bottom of the social order (Sex offender is just above snitches or government informers).

So back to my point, we need more volunteers. You bring skills, but more importantly you bring human contact untainted by the culture of violence. Find a local prison and talk to the chaplain or education director and see where you can fit in.