What Drew Me To My Disastrous Relationship 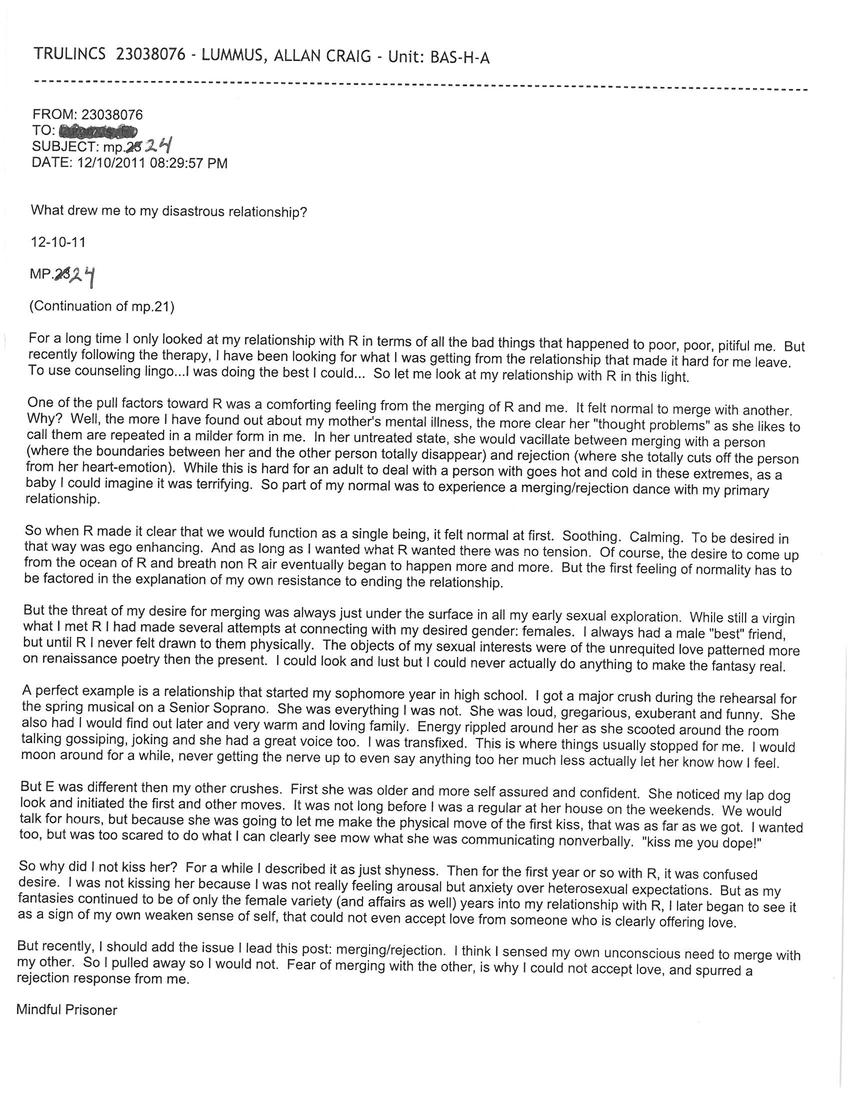 What drew me to my disastrous relationship?

One of the pull factors toward R was a comforting feeling from the merging of R and me. It felt normal to merge with another. Why? Well, the more I have found out about my mother's mental illness, the more clear her "thought problems” as she likes to call them are repeated in a milder form in me. In her untreated state, she would vacillate between merging with a person (where the boundaries between her and the other person totally disappear) and rejection (where she totally cuts off the person from her heart-emotion). While this is hard for an adult to deal with a person with goes hot and cold in these extremes, as a baby I could imagine it was terrifying. So part of my normal was to experience a merging/rejection dance with my primary relationship.

So when R made it clear that we would function as a single being, it felt normal at first. Soothing. Calming. To be desired in that way was ego enhancing. And as long as I wanted what R wanted there was no tension. Of course, the desire to come up from the ocean of R and breath non R air eventually began to happen more and more. But the first feeling of normality has to be factored in the explanation of my own resistance to ending the relationship.

But the threat of my desire for merging was always just under the surface in all my early sexual exploration. While still a virgin what I met R I had made several attempts at connecting with my desired gender: females. I always had a male "best" friend, but until R I never felt drawn to them physically. The objects of my sexual interests were of the unrequited love patterned more on renaissance poetry then the present. I could look and lust but I could never actually do anything to make the fantasy real.

A perfect example is a relationship that started my sophomore year in high school. I got a major crush during the rehearsal for the spring musical on a Senior Soprano. She was everything I was not. She was loud, gregarious, exuberant and funny. She also had I would find out later and very warm and loving family. Energy rippled around her as she scooted around the room talking gossiping, joking and she had a great voice too. I was transfixed. This is where things usually stopped for me. I would moon around for a while, never getting the nerve up to even say anything too her much less actually let her know how I feel.

But E was different then my other crushes. First she was older and more self assured and confident. She noticed my lap dog look and initiated the first and other moves. It was not long before I was a regular at her house on the weekends. We would talk for hours, but because she was going to let me make the physical move of the first kiss, that was as far as we got. I wanted too, but was too scared to do what I can clearly see mow what she was communicating nonverbally, "kiss me you dope!"

So why did I not kiss her? For a while I described it as just shyness. Then for the first year or so with R, it was confused desire. I was not kissing her because I was not really feeling arousal but anxiety over heterosexual expectations. But as my fantasies continued to be of only the female variety (and affairs as well) years into my relationship with R, I later began to see it as a sign of my own weaken sense of self, that could not even accept love from someone who is clearly offering love.

But recently, I should add the issue I lead this post: merging/rejection. I think I sensed my own unconscious need to merge with my other. So I pulled away so I would not. Fear of merging with the other, is why I could not accept love, and spurred a rejection response from me.

My name is Joe and I just wanted to say hi and let you know that I will be transcribing your posts into typed text from the scans of your letters here on behindthebars.com.

The conversions will be exact with just a few exceptions. Those being where line breaks shift when the text is put online and other things related to posting online. However, everything else will be word for word including the spelling as you wrote it. For your handwritten posts, I will do my best to convert them accurately as well.

Stay safe and I will drop you a line when I have more of your writing transcribed.