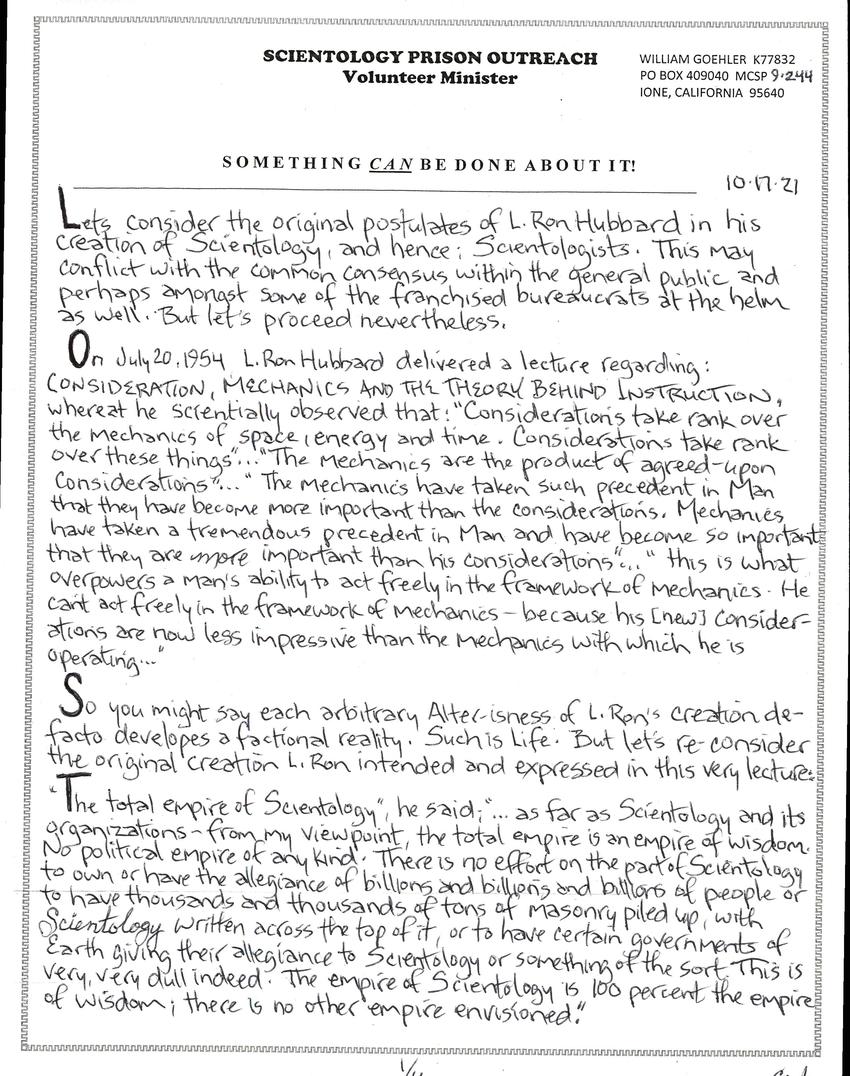 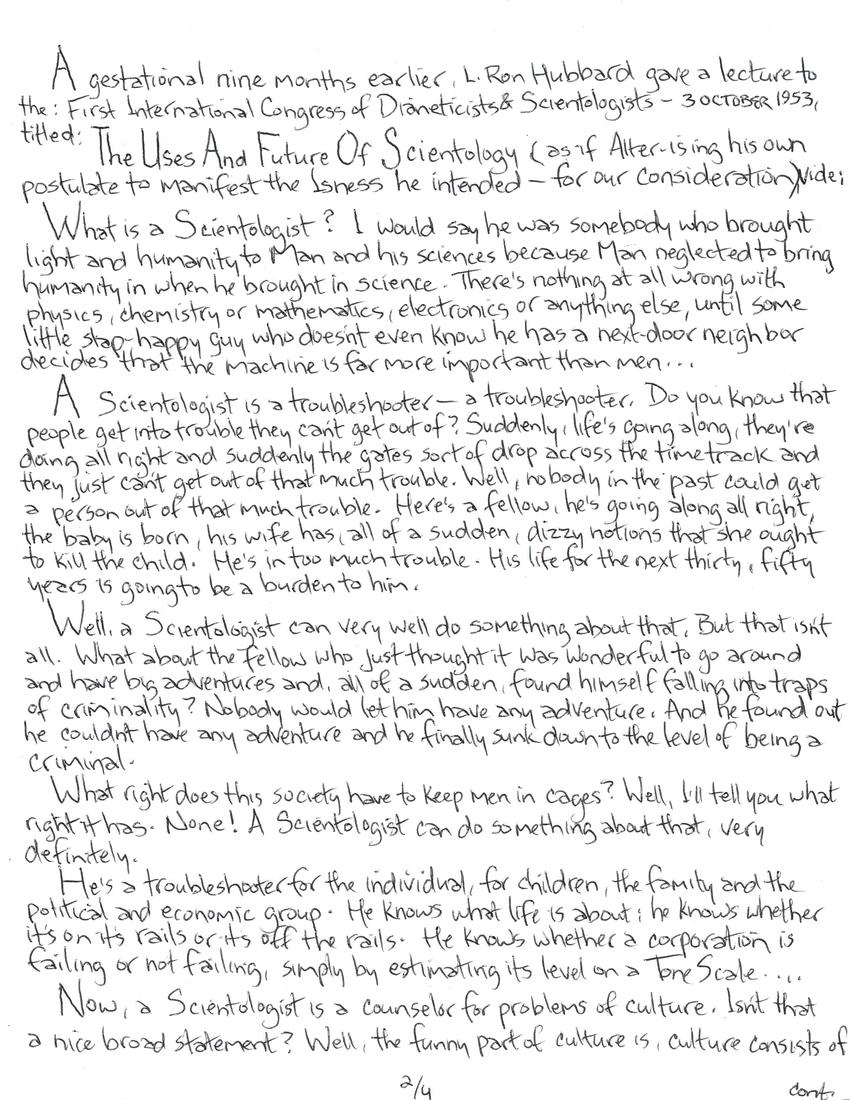 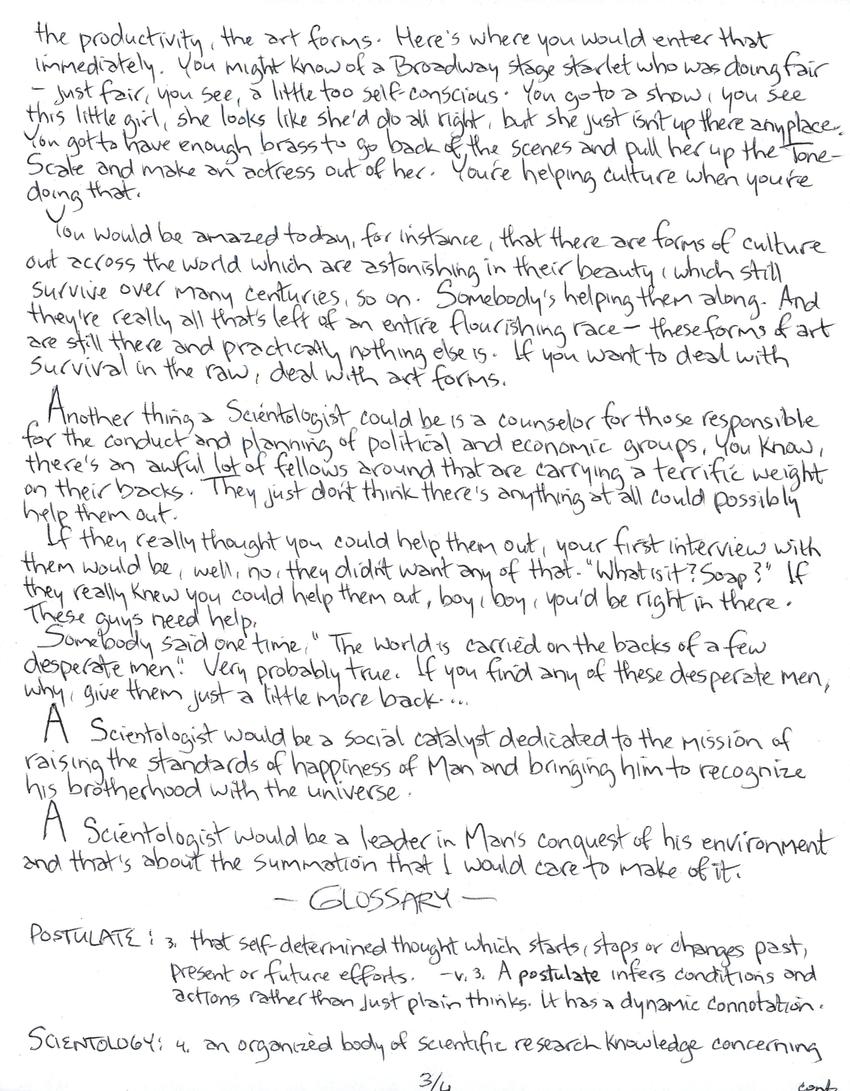 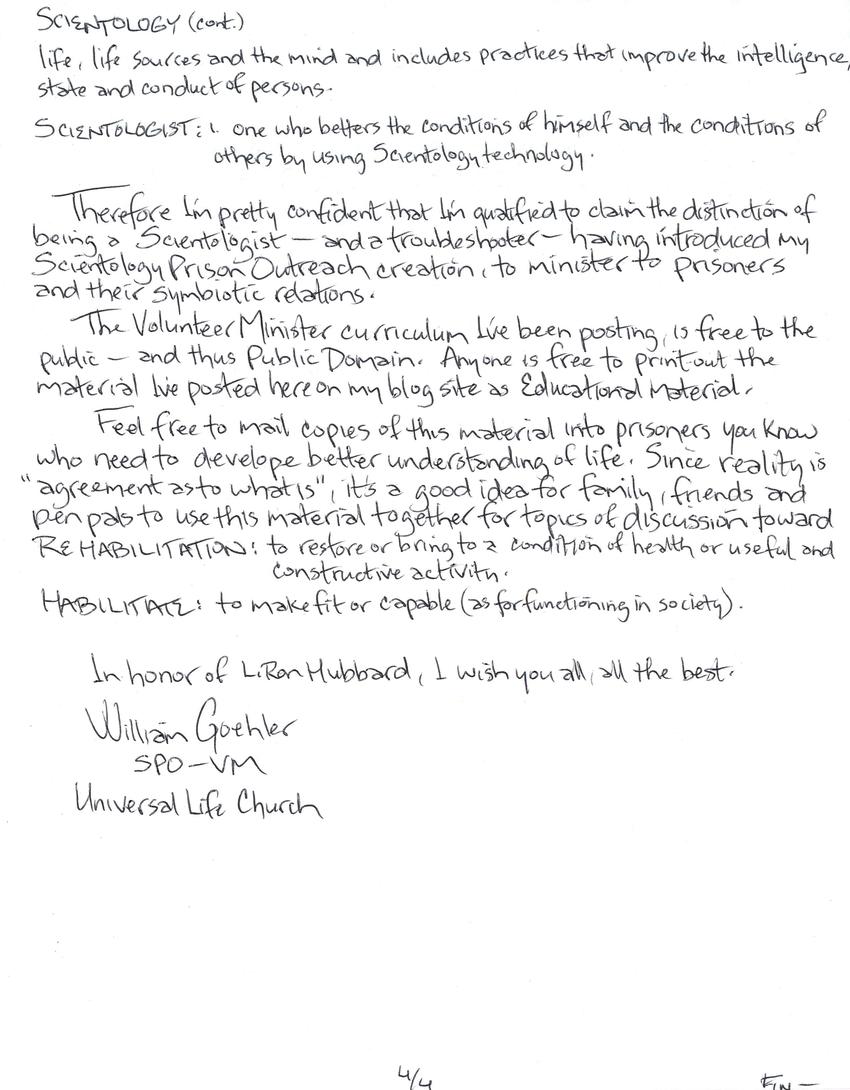 Let's consider the original postulates of L. Ron Hubbard in his creation of Scientology, and hence; Scientologists. This may conflict with the common consensus within the general public and perhaps amongst some of the franchised bureaucrats at the helm as well. But let's proceed nevertheless.

So you might say each arbitrary Alteri-isness of L.Ron's creation de-facto developes a factional reality. Such is Life. But let's re-consider the original creation L.Ron intended and expressed in this very lecture.

A gestational nine months earlier, L.Ron Hubbard gave a lecture to the: First International Congress of Dianeticists & Scientologists - 3 October 1953, titled: The Uses And Future Of Scientology (as if Alter-ising his own postulate to manifest the Isness he intended - for our consideration), vide; What is a Scientologist? I would say he was somebody who brought light and humanity to Man and his sciences because Man neglected to bring humanity in when he brought in science. There's nothing at all wrong with physics, chemistry or mathematics, electronics or anything else, until some little slap-happy guy who doesn't even know he has a next-door neighbor decides that the machine is far more important than men...

A Scientologist is a troubleshooter - a troubleshooter, Do you know that people get into trouble they can't get out of? Suddenly, life's going along, they're doing all right and suddenly the gates sort of drop across the timetrack and they just can't get out of that much trouble. Well, nobody in the past could get a person out of that much trouble. Here's a fellow, he's going along all right, the baby is born, his wife has, all of a sudden, dizzy notions that she ought to kill the child. He's in too much trouble. His life for the next thirty, fifty years is going to be a burden to him.

Well, a Scientologist can very well do something about that. But that isn't all. What about the fellow who just thought it was Wonderful to go around and have big adventures and, all of a sudden, found himself falling into traps of criminality? Nobody would let him have any adventure. And he found out he couldn't have any adventure and he finally sunk down to the level of being a criminal.

What right does this society have to keep men in cages? Well, I'll tell you what right it has. None! A Scientologist can do something about that, very definitely.

He's a troubleshooter for the individual, for children, the family and the political and economic group. He knows what life is about; he knows whether it's on its rails or it's off the rails. He knows whether a corporation is failing or not failing, simply by estimating its level on a Ton Scale....

Now, a Scientologist is a counselor for problems of culture. Isn't that a nice broad statement? Well, the funny part of culture is, culture consist of the productivity, the art forms. Here's where you would ender that immediately. You might know of a Broadway stage starlet who was doing fair - just fair, you see, a little too self-conscious. You go to a show, you see this little girl, she looks like she'd do all right, but she just isn't up there any place. You got to have enough brass to go back of the scenes and pull her up the Tone Scale and make an actress out of her. You're helping culture when you're doing that.

You would be amazed today, for instance, that there are forms of culture out across the world which are astonishing in their beauty, which still survive over many centuries, so on..Somebody's helping them along. And they're really all that's left of an entire flourishing race 0 these forms of art are still there and practically nothing else is. If you want to deal with survival in the raw, deal with art forms.

Another thing a Scientologist could be is a counselor for those responsible for the conduct and planning of political and economic groups. You know, there's an awful lot of fellows around that are carrying a terrific weight on their backs. They just don't think there's at all could possibly help them out.

If they really thought you could help them out, your first interview with them would be, well, no they didn't want any of that. "What is it? Soap?" If they really know you could help them out, boy, boy, you'd be right in there. These guys need help.
Somebody said one time, "The world is carried on the backs of a few desperate men." Very probably true. If you find any of these desperate men, why, give them just a little more back....

A Scientologist would be a social catalyst dedicated to the mission of raising the standards of happiness of Man and bringing him to recognize his brotherhood with the universe.

A Scientologist would be a leader in Man's conquest of his environment and that's about the summation that I would care to make of it.

Postulate: 3. that self-determined thought which starts, stops or changes past, present or future efforts. -v. 3. A postulate infers conditions and actions rather than just plain thinks. It has a dynamic connotation.

Scientology: 4. an organized body of scientific research knowledge concerning life, life sources and the mind and includes practices that improve the intelligence, state, and conduct of persons.

Therefore I'm pretty confident that I'm qualified to claim the distinction of being a Scientologist - and a troubleshooter - having introduced my Scientology Prison Outreach creation, to minister to prisoners and their symbiotic relations.

The Volunteer Minister curriculum I've been posting, is free to the public - and thus Public Domain, Anyone is free to print out the material I've posted here on my blog site as Educational Material.

Feel free to mail copies of this material into prisoners you know who need to develop better understanding of life. Since reality is "agreement as to what is", it's a good idea for family, friends, and pen pals to use this material together for topics of discussion toward

REHABILITATION: to restore or bring to a condition of health or useful and constructive activity.

HABILITATE: to make fit or capable (as for functioning in society).

In honor of L.Ron Hubbard, I wish you all, all the best.