Forgotton World Behind the Walls 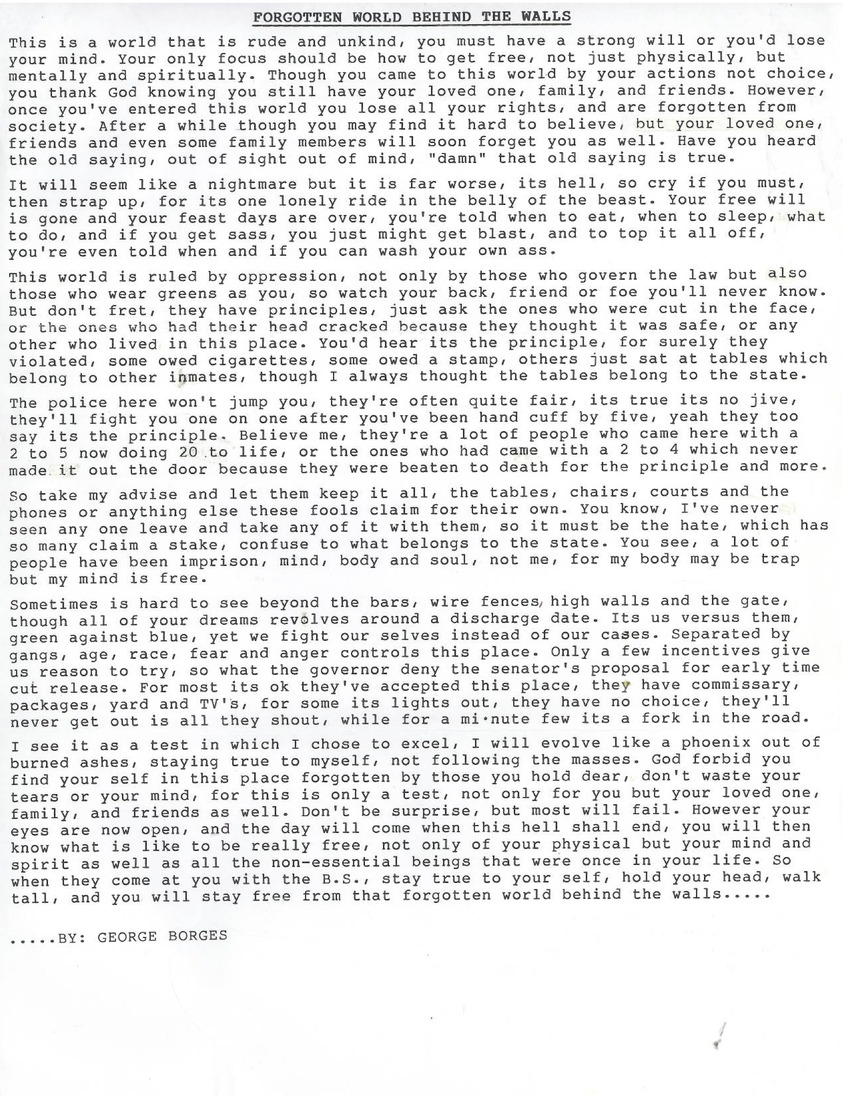 Forgotten World Behind the Walls

This is a world that is rude and unkind, you must have a strong will or you'd lose your mind. Your only focus should be how to get free, not just physically, but mentally and spiritually. Though you came to this world by your actions not choice, you thank God knowning you still have your loved one, family, and friends. However, once you've entered this world you lose all your rights, and are forgotten from society. After a while though you may find it hard to believe, but your loved one, friends and even some family members will soon forget you as well. Have you heard the old saying, out of sight out of mind, "damn" that old saying is true.
It will seem like a nightmare but it is far worse, its hell, so cry if you must, then strap up, for its one lonely ride in the belly of the beast. Your free will is gone and your feast days are over, you're told when to eat, when to sleep, what to do, and if you get sass, you get blast, and to top it all off, you're even told when and if you can wash your own ass.
This world is ruled by oppression, not only by those who govern the law but also those who wear greens as you, so watch your back, friend or foe you'll never know. But don't fret, they have principles, just ask the ones who were cut in the face, or the ones who had their head cracked because they thought hit was safe, or any other who lived in this place. You'd hear its the principle, for surely they violated, some owned cigarettes, some owned a stamp, others just sat at tables which belong to other inmates, though I always thought the tables belong to the state.
The police here won't jump you, they're often quite fair, its true its no jive, they'll fight you one on one after you've been hand cuff by five, yeah they too say its the principle. Believe me, they're a lot of people who came here with a 2 to 5 now doing 20 to life, or the ones who had come with a 2 to 4 which never made it out the door because they were beaten to death for the principle and more.
So take my advice and let them keep it all,the tables, chairs, courts, and the phones or anything else these fools calm for their own. You know, I've never seen any one leave and take any of it with them, so it must be the hate, which has so many claim a stake, confuse to what belongs to the state. You see, a lot of people have been imprison, mind body, and soul, not me, for my body may be trap but my mind is free.
Sometimes is hard to see beyond the bars, wire fences, high walls and the gate, though al of your dreams revolves around a discharge date. Its us versus the, green against blue, yet we fight our selves instead of our cases. Separated by gangs, age, race, fear and anger controls this place. Only a few incentives give us reason to try, so what the governor deny the senator's proposal for early time cut release. For its ok they've accepted this place, they have commissary, packages, yard and TV's, for some its lights out, they have no choice, they'll never get is all they shout, while for a minute few its a fork in the road.
I see it as a test in which I chose to excel, I will evolved like a phoenix out of burned ashes, staying tur to myself, not following the masses. God forbit you find yourself in this place forgotten by those you hold dear, don't waste your tears or your mind, for tis is only a test, not only for you but your loved one, family, and friends as well. Don't be surprise, but most will fail. However your eyes are now open, and the day will come when this hell shall end, you will then know what is like to be really free, not only of your physical but your mind and spirit as well as all non-essential beings that were once in your life. So when they come at you with the B.S., stay true to your self, hold your head, walk tall, and you will stay free from that forgotten world beind the walls....

I can't believe that no one commented on this poem. It's really good. So good that it actually inspired me to write a couple of poems. Honestly, I have never had an inspiration like this before. I've always wanted to write poems that rhymed and I never did it until now. Until I read this poem, your poem... And I'm not saying this to blow smoke up your ass, I'm serious. Here, I'll show you one of the writings that you inspired me to write.

And it won’t matter if you become somebody some day
Because someone will easily take your place
Steal your ideas
And make a living off you, THEIR way

leaving you to feel like a failure
people telling you to talk to God,
he’ll have the answer

I pray, looking up at the ceiling
Hoping someday he’ll give me a reason….
To keep going on with my life and my ideas
But all I’m left with are clones of my feelings
Washed up on canvases with someone elses
fake veneers 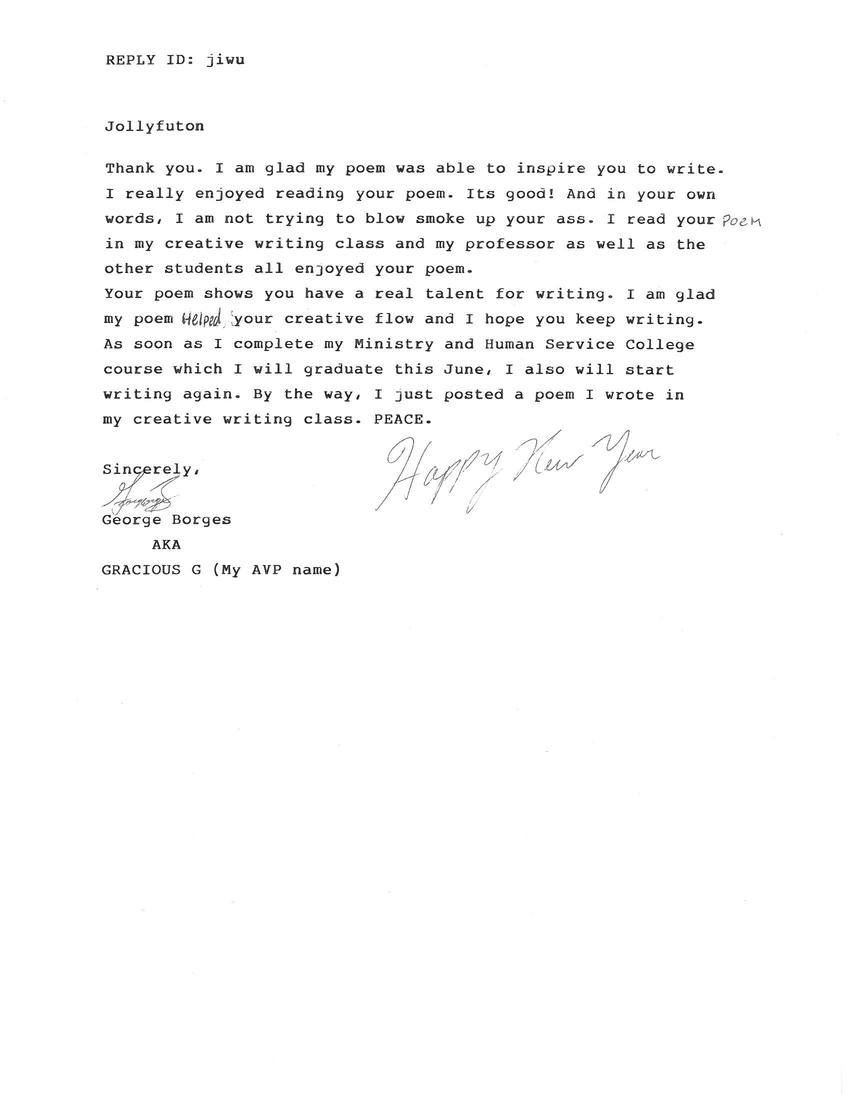 Hey. Sorry that it has taken me so long to respond. How are you? I'm very flattered that you read my poem in your creative writing class. Thank you. I'm really glad that you enjoyed it. Ever since I wrote that poem I have been writing ever since. Thank you for inspiring me. You're an inspiration.
How is your human services course going for you? I've taken a human services course before and I really enjoyed it. What made you want to get into human services?
Hey, I was wondering if you wanted to be pen pals? I would like to read more of your writings and I would like to share some of mine with you also. I think it would be fun! Anyway, let me know. You seem like a really swell guy! = D. I'm going to end this response for now, I look forward to hearing back from you and becoming pen pals.
Until next time...
Jolly
Thanks for writing! I finished the transcription for your post.