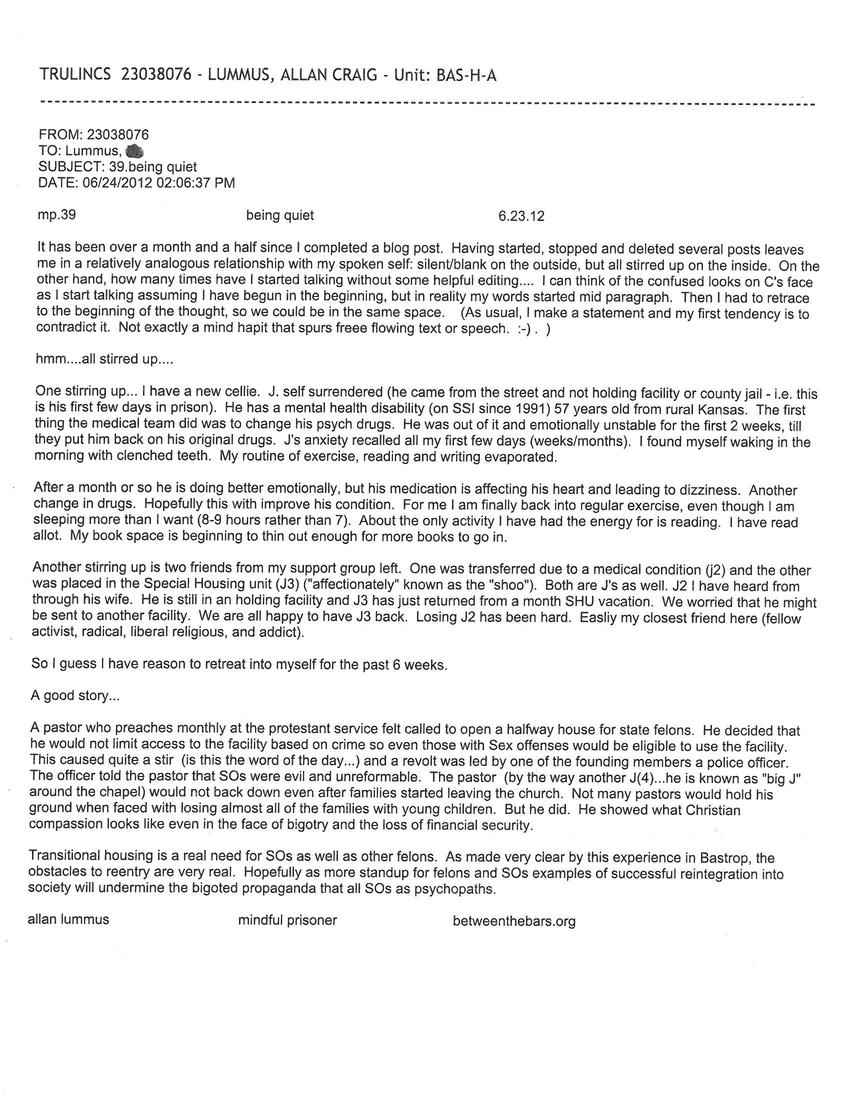 It has been over a month and a half since I completed a blog post. Having started, stopped and deleted several posts leaves me in a relatively analogous relationship with my spoken self: silent/blank on the outside, but all stirred up on the inside. On the other hand, how many times have I started talking without some helpful editing...I can think of the confused looks on C's face as I start talking, assuming I have begun in the beginning, but in reality my words started mid-paragraph. Then I had to retrace to the beginning of the thought, so we could be in the same space. (As usual, I make a statement and my first tendency is to contradict it. Not exactly a mind habit that spurs free-flowing text or speech. :-) . )

One stirring up...I have a new cellie. J. self surrendered (he came from the street and not holding facility or county jail - i.e. this is his first few days in prison). He has a mental health disability (on SSI since 1991) 57 yaers old from rural Kansas. The first thing the medical team did was to change his psych drugs. He was out of it and emotionally unstable for the first 2 weeks, 'til they put him back on his original drugs. J's anxiety recalled all my first few days (weeks/months). I found myself waking the morning with clenched teeth. My routine of exercise, reading and writing evaporated.

After a month or so he is doing better emotionally, but his medication is affecting his heart and leading to dizziness. Another change in drugs. Hopefully this will improve his condition. For me I am finally back into regular exercise, even though I am sleeping more than I want (8-9 hours rather than 7). About the only activity I have had the energy for is reading. I have read a lot. My book space is beginning to thin out enough for more books to go in.

Another stirring up is two friends from my support group left. One was transferred due to a medial condition (J2) and the other was placed in the Special Housing unit (J3) ("affectionately" known as the "shoo"). Both are J's as well. J2 I have heard from through his wife. He is still in a holding facility and J3 has just returned from a month SHU vacation. We worried that he might be sent to another facility. We are all happy to have J3 back. Losing J2 has been hard. Easily my closest friend here (fellow activist, radical, liberal religious, and addict).

So I guess have reason to retreat into myself for the past 6 weeks.

A pastor who preaches monthly at the Protestant service felt called to open a halfway house for state felons. He decided that he would not limit access to the facility based on crime so even those with sex offenses would be eligible to use the facility. This caused quite a stir (is this the word of the day...) and a revolt was led by one of the founding members, a police officer. The officer told the pastor that SOs were evil and unreformable. The past (by the way another (J4)...he is known as "big J" around the chapel) would not back down even after families started leaving the church. Not many pastors would hold his ground when faced with losing almost all of the families with young children. But he did. He showed what Christian compassion looks like even in the face of bigotry and the loss of financial security.

Transitional housing is a real need for SOs as well as other felons. As made very clear by this experience in Bastrop, the obstacles to reentry are very real. Hopefully as more stand up for felons and SOs examples of successful reintegration into society will undermine the bigoted propaganda that all SOs are psychopaths.