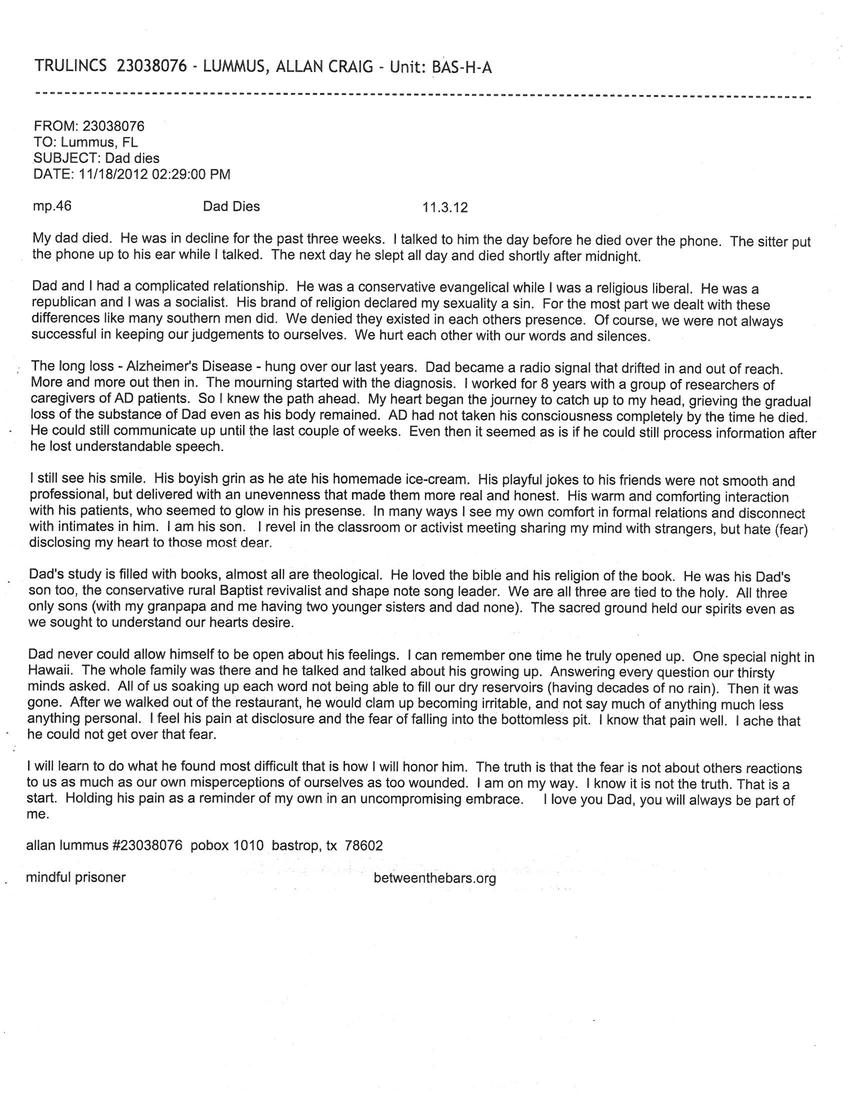 My dad died. He was in decline for the past three weeks. I talked to him the day before he died over the phone. The sitter put the phone up to his ear while I talked. The next day he slept all day and died shortly after midnight.

Dad and I had a complicated relationship. He was a conservative evangelical while I was a religious liberal. He was a republican and I was a socialist. His brand of religion declared my sexuality a sin. For the most part we dealt with these differences like many southern men did. We denied they existed in each other's presence. Of course, we were not always successful in keeping our judgements to ourselves. We hurt each other with our words and silences.

The long loss - Alzheimer's Disease - hung over our last years. Dad became a radio signal that drifted in and out of reach. More and more out than in. The mourning started with the diagnosis. I worked for 8 years with a group of researchers of caregivers of AD patients. So I knew the path ahead. My heart began the journey to catch up to my head, grieving the gradual loss of the substance of Dad even as his body remained. AD had not taken his consciousness completely by the time he died. He could still communicate up until the last couple of weeks. Even then it seemed as if he could still process information after he lost understandable speech.

I still see his smile. His boyish grin as he ate his homemade ice-cream. His playful jokes to his friends were not smooth and professional, but delivered with an unevenness that made them more real and honest. His warm and comforting interaction with his patients, who seemed to glow in his presence. In many ways I see my own comfort in formal relations and disconnect with intimates in him. I am his son. I revel in the classroom or activist meeting sharing my mind with strangers, but hate (fear) disclosing my heart to those most dear.

Dad's study is filled with books, almost all are theological. He loved the bible and his religion of the book. He was his Dad's son too, the conservative rural Baptist revivalist and shape note song leader. We all three are tied to the holy. All three only sons (with my granpapa and me having two younger sisters and dad none). The sacred ground held our spirits even as we sought to understand our heart's desire.

Dad never could allow himself to be open about his feelings. I can remember one time he truly opened up. One special night in Hawaii. The whole family was there and he talked and talked about his growing up. Answering every question our thirsty minds asked. All of us soaking up each word, not being able to fill our dry reservoirs (having decades of no rain). Then it was gone. After we walked out of the restaurant, he would clam up, becoming irritable, and not say much of anything, much less anything personal. I feel his pain at disclosure and the fear of falling into the bottomless pit. I know that pain well. I ache that he could not get over that fear.

I will learn to do what he found most difficult, that is how I will honor him. The truth is that the fear is not about others' reactions to us as much as our own misperceptions of ourselves as too wounded. I am on my way. I know it is not the truth. That is a start. Holding his pain as a reminder of my own in an uncompromising embrace. I love you, Dad, you will always be part of me.

I am so sorry for your loss, our loss. As always, I will keep you in my thoughts and prayers.

Christi
I'm sorry to hear it, Allan. Be looking for a letter I sent you on the 9th. Should be there any day now.