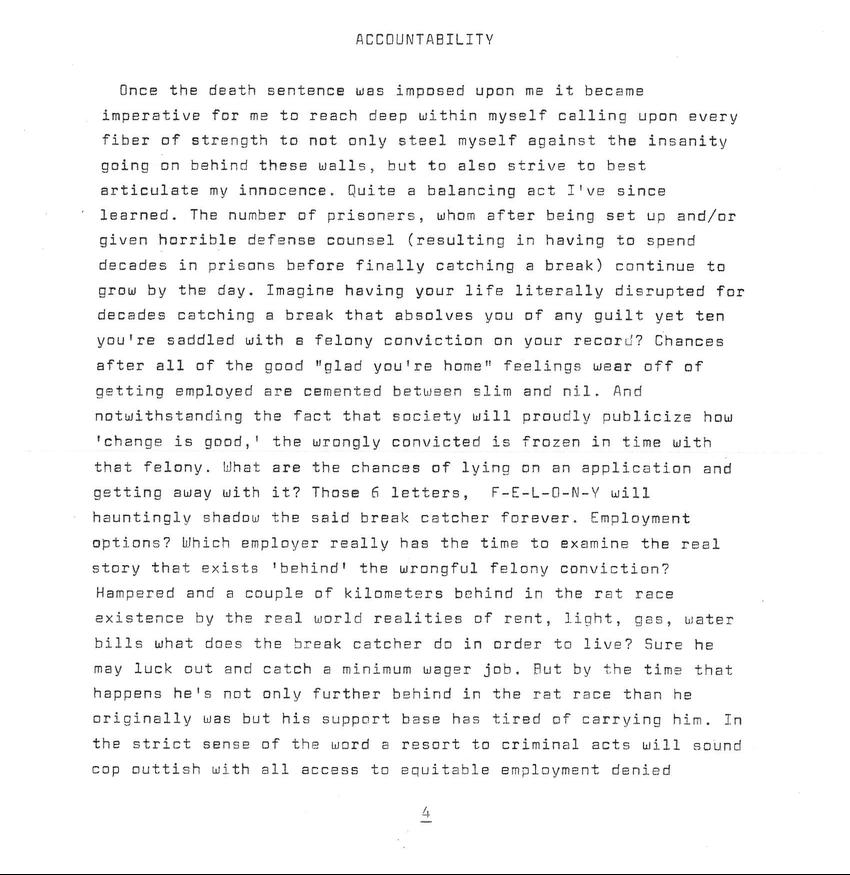 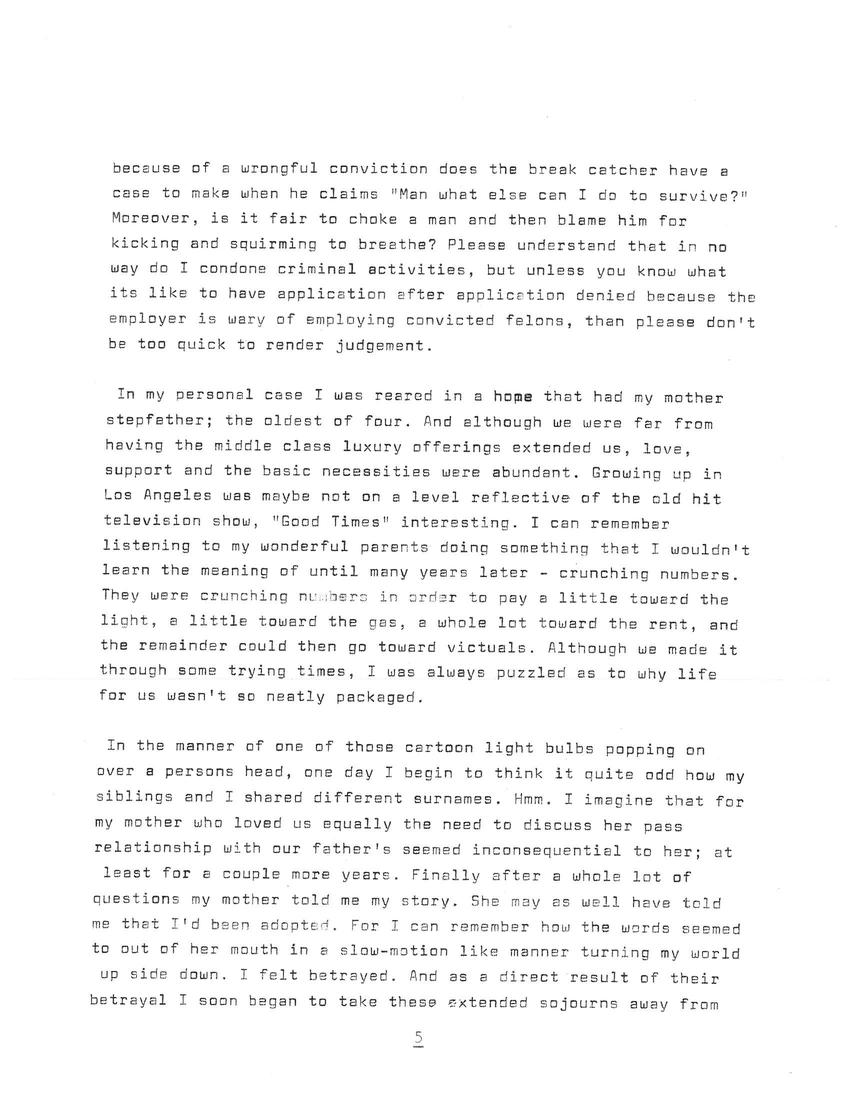 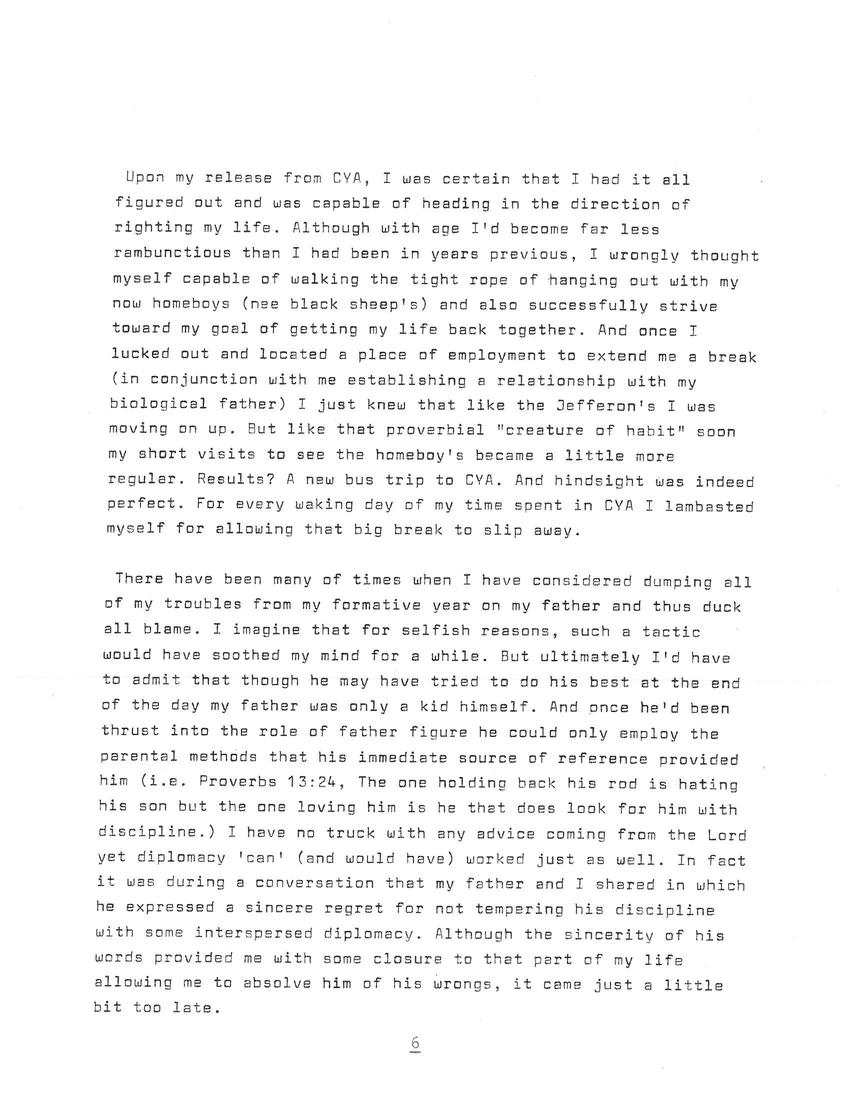 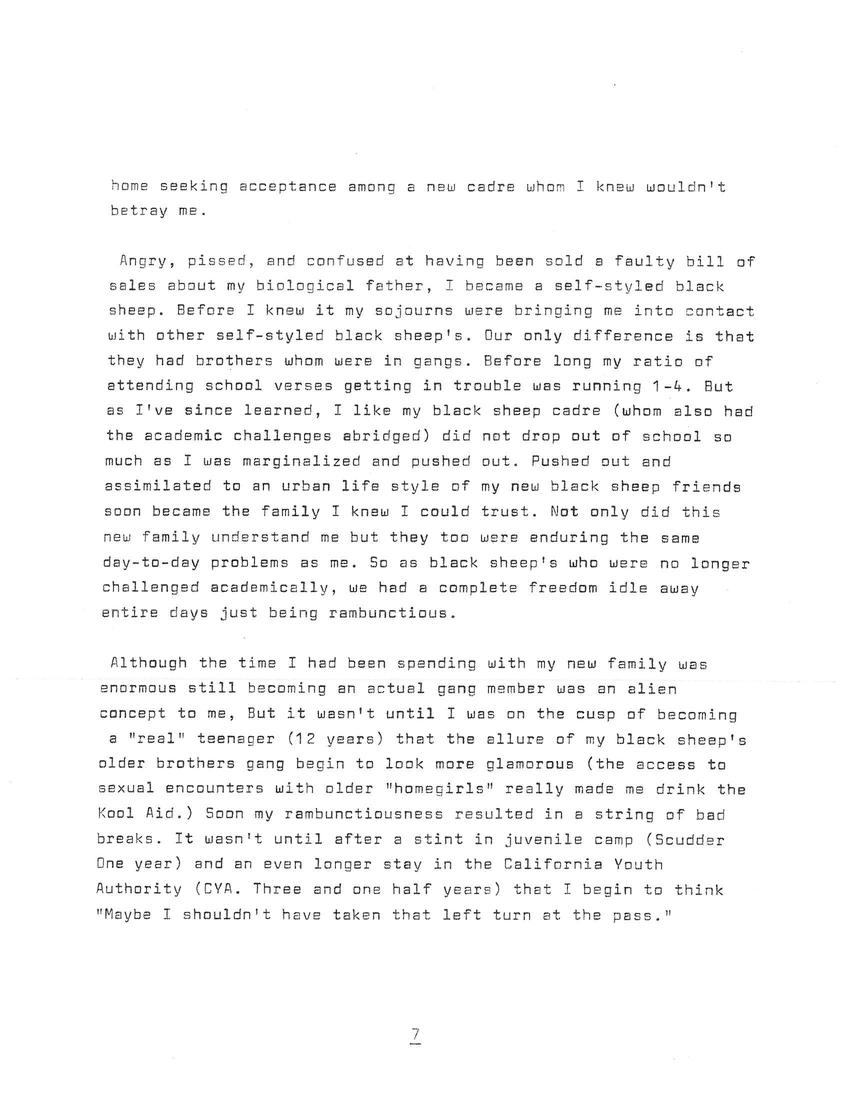 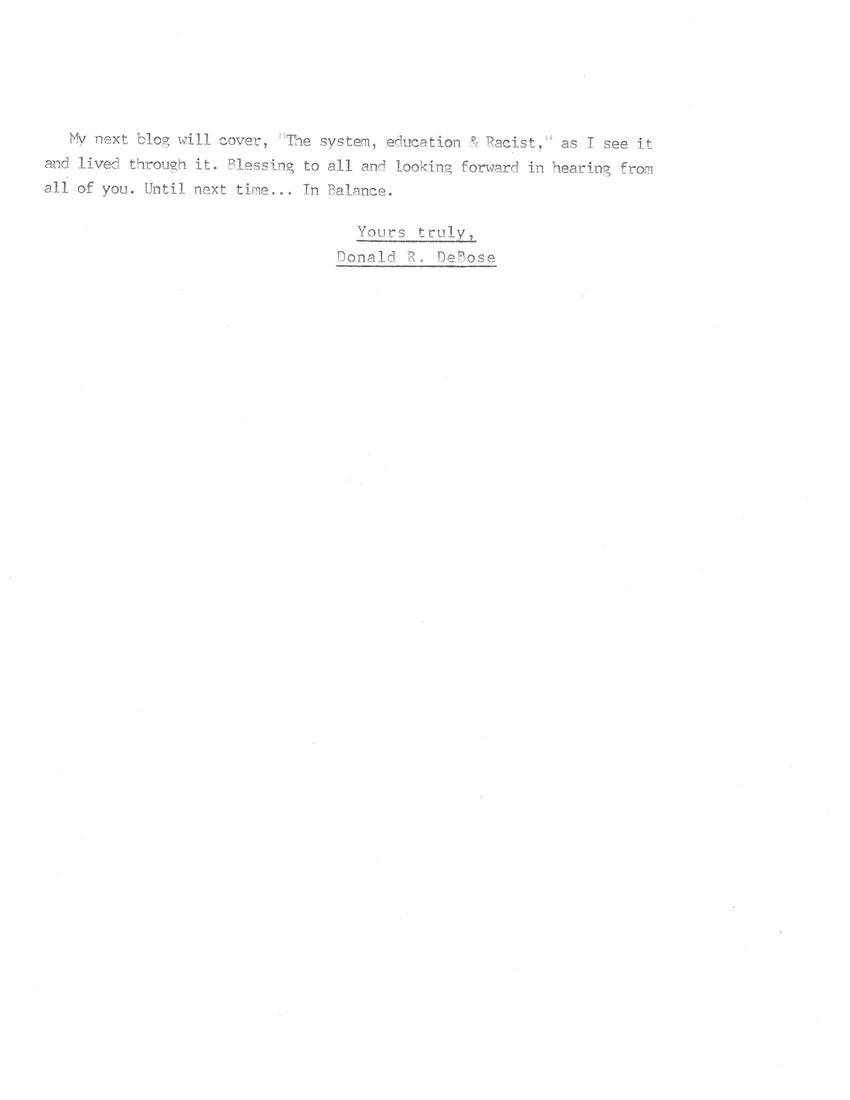 Once the death sentence was imposed upon me it became imperative for me to reach deep within myself calling upon every fiber of strength to not only steel myself against the insanity going on behind these walls, but to also strive to best articulate my innocence. Quite a balancing act I've since learned. The number of prisoners, whom after being set up and/or given horrible defense counsel (resulting in having to spend decades in prisons before finally catching a break) continue to grow by the day. Imagine having your life literally disrupted for decades catching a break that absolves you of any guilt yet then you're saddled with a felony conviction on your record? Chances after all of the good "glad you're home" feelings wear off of getting employed are cemented between slim and nil. And notwithstanding the fact that society will proudly publicize how "change is good", the wrongly convicted is frozen in time with that felony. What are the chances of lying on an application and getting away with it? Those 6 letters, F-E-L-O-N-Y will hauntingly shadow the said break catcher forever. Employment options? Which employer really has the time to examine the real story that exists "behind" the wrongful felony conviction? Hampered and a couple of kilometers behind in the rat race existence by the real world realities of rent, light, gas, water bills, what does the break catcher do in order to live? Sure, he may luck out and catch a minimum wage job. But by the time that happens he's not only further behind in the rat race than he originally was but his support base has tired of carrying him. In the strict sense of the word a resort to criminal acts will sound cop outtish with all access to equitable employment denied because of a wrongful conviction does the break catcher have a case to make when he claims "Man, what else can I do to survive?" Moreover, is it fair to choke a man and then blame him for kicking and squirming to breathe? Please understand that in no way do I condone criminal activities, but unless you know what it's like to have application after application denied because the employer is wary of employing convicted felons, then please don't be too quick to render judgement.

In my personal case I was reared in a home that had my mother stepfather; the oldest of four. And although we were far from having the middle class luxury offerings extended us, love, support and the basic necessities were abundant. Growing up in Los Angeles was maybe not on a level reflective of the old hit television show, "Good Times" interesting. I can remember listening to my wonderful parents doing something that I wouldn't learn the meaning of until many years later - crunching numbers. They were crunching numbers in order to pay a little toward the light, a little toward the gas, a whole lot toward the rent, and the remainder could then go toward victuals. Although we made it through some trying times, I was always puzzled as to why life for us wasn't so neatly packaged.

In the manner of one of those cartoon light bulbs popping on over a person's head, one day I begin to think it quite odd how my siblings and I shared different surnames. Hmm. I imagine that for my mother who loved us equally the need to discuss her past relationship with our fathers seemed inconsequential to her; at least for a couple more years. Finally, after a whole lot of questions, my mother told me my story. She may as well have told me that I'd been adopted. For I can remember how the words seemed to out of her mouth in a slow-motion like manner, turning my world upside down. I felt betrayed. And as a direct result of their betrayal, I soon began to take these extended sojourns away from home seeking acceptance among a new cadre whom I knew wouldn't betray me.

Angry, pissed, and confused at having been sold a faulty bill of sales about my biological father, I became a self-styled black sheep. Before I knew it my sojourns were bringing me into contact with other self-styled black sheeps. Our only difference is that they had brothers whom were in gangs. Before long my ratio of attending school versus getting in trouble was running 1-4. But as I've since learned, I like my black sheep cadre (who also had the academic challenges abridged) did not drop out of school so much as I was marginalized and pushed out. Pushed out and assimilated to an urban lifestyle of my new black sheep friends soon became the family I knew I could trust. Not only did this new family understand me but they too were enduring the same day-to-day problems as me. So as black sheeps who were no longer challenged academically, we had a complete freedom idle away entire days just being rambunctious.

Although the time I had been spending with my new family was enormous, still becoming an actual gang member was an alien concept to me. But it wasn't until I was on the cusp of becoming a "real" teenager (12 years) that the allure of my black sheep's older brother's gang began to look more glamorous (the access to sexual encounters with older "homegirls" really made me drink the Kool Aid.) Soon my rambunctiousness resulted in a string of bad breaks. It wasn't until after a stint in juvenile camp (Scudder One year) and an even longer stay in the California Youth Authority (CYA. Three and one half years) that I began to think "Maybe I shouldn't have taken that left turn at the pass."

Upon my release from CYA, I was certain that I had it all figured out and was capable of heading in the direction of righting my life. Although with age I'd become far less rambunctious than I had been in years previous, I wrongly thought myself capable of walking the tightrope of hanging out with my now homeboys (nee black sheeps) and also successfully strive toward my goal of getting my life back together. And once I lucked out and located a place of employment to extend me a break (in conjunction with me establishing a relationship with my biological father) I just knew that like the Jeffersons I was moving on up. But like that proverbial "creature of habit" soon my short visits to see the homeboys became a little more regular. Results? A new bus trip to CYA. And hindsight was indeed perfect. For every waking day of my time spent in CYA I lambasted myself for allowing that big break to slip away.

There have been many of times when I have considered dumping all of my troubles from my formative years on my father and thus duck all blame. I imagine that for selfish reasons, such a tactic would have soothed my mind for a while. But ultimately I'd have to admit that though he may have tried to do his best at the end of the day, my father was only a kid himself. And once he'd been thrust into the role of father figure he could only employ the parental methods that his immediate source of reference provided him (i.e. Proverbs 13:24, The one holding back his rod is hating his son but the one loving him is he that does look for him with discipline.) I have no truck with any advice coming from the Lord yet diplomacy "can" (and would have) worked just as well. In fact it was during a conversation that my father and I shared in which he expressed a sincere regret for not tempering his discipline with some interspersed diplomacy. Although the sincerity of his words provided me with some closure to that part of my life allowing me to absolve him of his wrongs, it came just a little bit too late.

My next blog will cover, "The system, education & Racist," as I see it and lived through it. Blessing to all and looking forward in hearing from all of you. Until next time... In Balance.