Hawkeyes: Through The Vision We Can See... 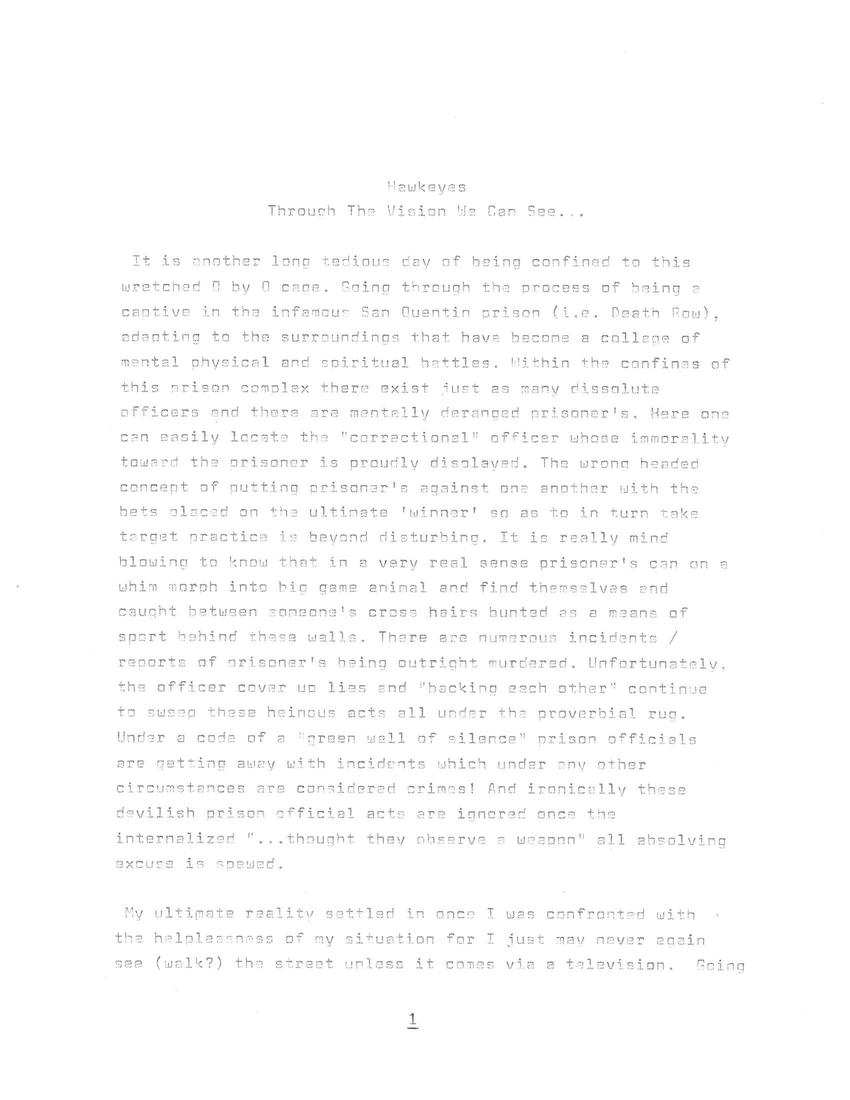 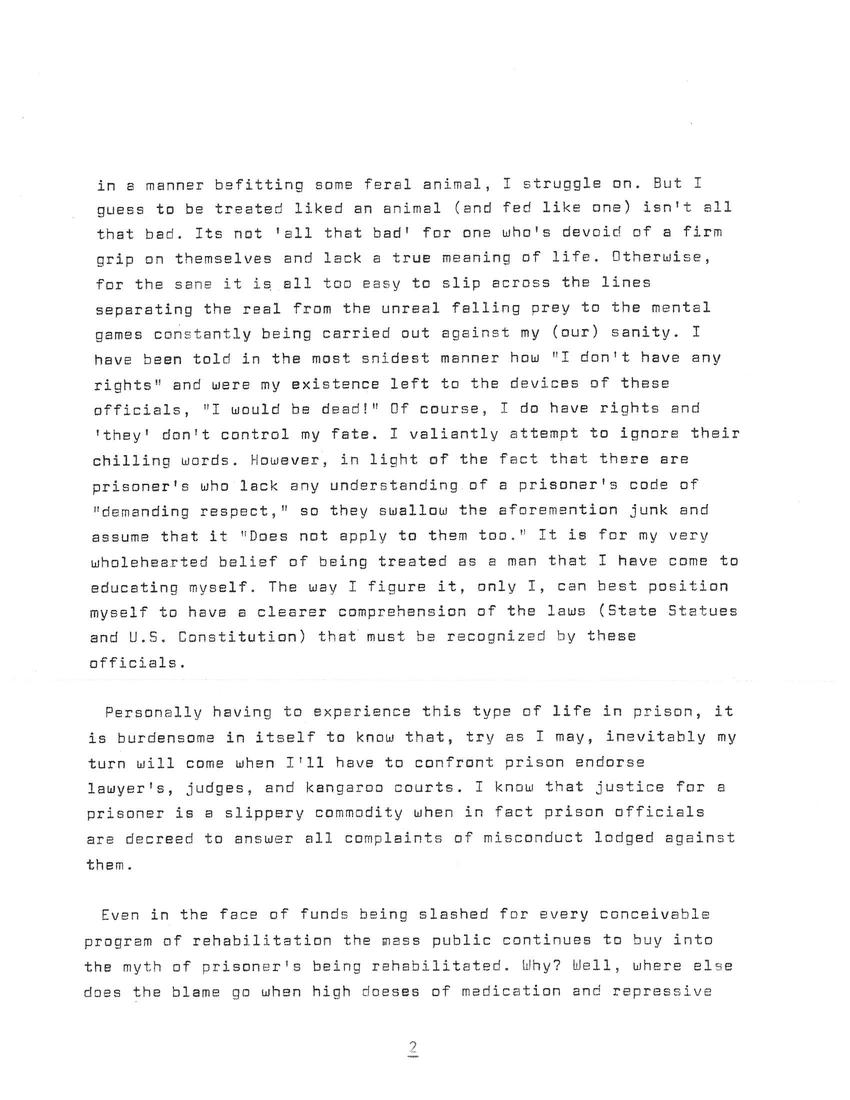 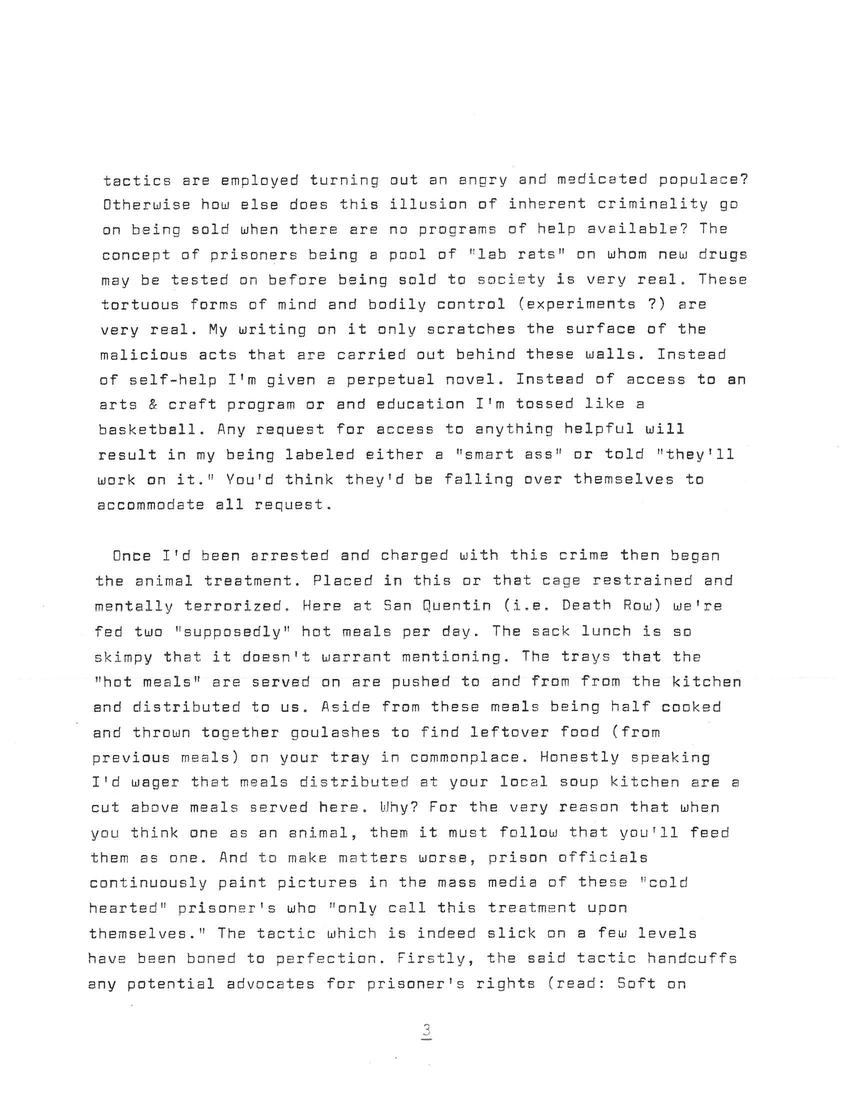 Through the Vision We Can See...

It is another long tedious day of being confined to this wretched 0 by 0 cage. Going through the process of being a captive in the infamous San Quentin prison (i.e. Death Row), adapting to the surroundings that have become a college of mental, physical and spiritual battles. Within the confines of this prison complex there ecist just as many dissolute officers as there are mentally deranged prisoners. Here one can easily locate the "correctional" officer whose immorality toward the prisoner is proudly displayed. The wrong-headed concept of putting prisoners against one another with the bets placed on the ultimate 'winner' so as to in turn take target practice is beyond disturbing. It is really mind-blowing to know what in a very real sense prisoners can on a whim morph into big game animals and find themselves caught between someone's cross-hairs bunted as a means of sport behind these walls. There are numerous incidents/reports of prisoners being outright murdered. Unfortunately, the officers cover-up lies and "backing each other" continue to sweep these heinous acts all under the proverbial rug. Under a code of a "green wall of silence" prison officials are getting away with incidents which under any other circumstances are considered crimes! And ironically these devilish prison official acts are ignored once the internalised "...thought they observed a weapon" all absolving excuse is spewed.

My ultimate reality settled in once I was confronted with the helplessness of my situation for I just may never again see (walk?) the street unless it comes via a television. Going in a matter befitting some feral animal, I struggle on. But I guess to be treated like an animal (and fed like one) isn't all that bad. It's not 'all that bad' for someone who's devoid of a firm grip on themselves and lack a true meaning in life. Otherwise, for the sane it is all too easy to slip across the lines separating the real from the unreal falling prey to the mental games constantly being carried out against my (our) sanity. I have been told in the snidest manner how I "don't have any right" and were my existence left to the devices of these officials, "I would be dead!" If course, I do have rights and 'they' don't control my fate. I valiantly attempt to ignore their chilling words. However, in light of the fact that there are prisoners who lack any understanding of a prisoner's code of "demanding respect," so they swallow the aforementioned junk and assume that it "does not apply to them too." It is for my very wholehearted belief of being treated as a man that I have come to educating myself. The way I figure it, only I, can best position myself to have a clearer comprehension of the law (State Statutes and U.S. Constitution) that must be recognised by these officials.

Personally having to experience this type of life in prison, it is burdensome in itself to know that, try as I may, inevitably my turn will come when I'll have to confront endorse lawyers, judges, and kangaroo courts. I know that justice for a prisoner is a slippery commodity when in fact prison officials are decreed to answer all complaints of misconduct lodged against them.

Even in the face of funds being slashes for every conceivable program of rehabilitation the mass public continues to buy into the myth of prisoners being rehabilitated. Why? Well, where else does the blame go when high doses of medication and repressive tactics are employed turning out an angry and medicated populace? Otherwise how else does this illusion of inherent criminality go on being sold when there are no program of help available? The concept of prisoners being a pool of "lab rats" on whom new drugs may be tested on before being sold to society is very real. These tortuous forms of mind and bodily control (experiments?) are very real. My writing on it only scratches the surface of the malicious acts that are carried out behind these walls. Instead of self-help I'm given a perpetual novel. Instead of access to an arts & crafts program or and education I'm tossed like a basketball. Any request for access to anything helpful will result in my being labelled a "smart ass" or told "they'll work on it." You'd think they'd be falling over themselves to accommodate all requests.

Once I'd been arrested and charged with this crime then began the animal treatment. Placed in this or that cage restrained and mentally terrorised. Here at San Quentin (i.e. Death Row) we're fed two "supposedly" hot meals a day. The sack lunch is so skimpy that it doesn't warrant mentioning. The trays that the "hot meals" are served on are pushed to and from the kitchen and distributed to us. Aside from these meals being half-cooked and thrown together goulashes to find leftover food (from previous meals) on your tray in commonplace. Honestly speaking I'd wager that meals distributed at your local soup kitchen are a cut above meals served here. Why? For the very reason that when you think one is an animal, then it must follow that you'll feed them as one. And to make matters worse, prison officials continuously paint pictures in the mass media of these "cold-hearted" prisoners who "only call this treatment upon themselves." The tactic which is indeed slick on a few levels has been honed to perfection. Firstly, the said tactic handcuffs any potential advocates for prisoner's rights (read: Soft on Crimes), then it diverts the spotlight away from the source of devious policies.