To Make The Wound More Beautiful 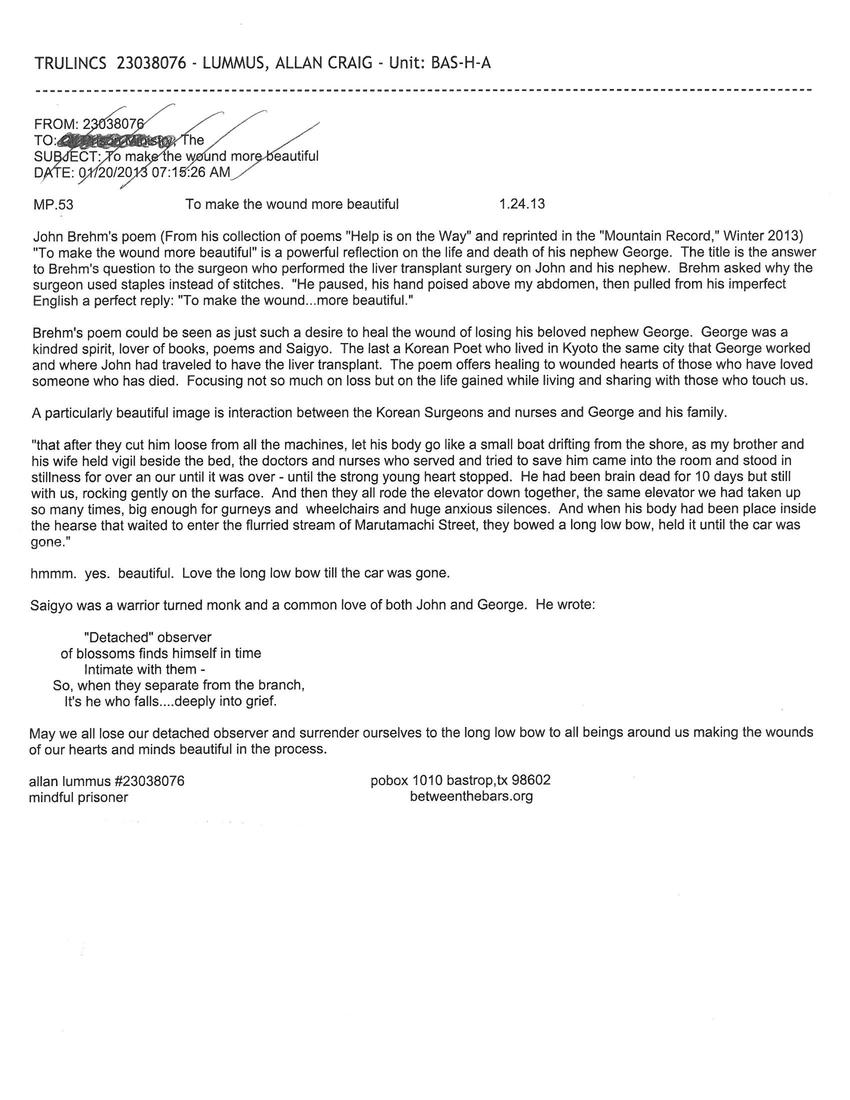 John Brehm's poem (From his collection of poems "Help is on the Way" and reprinted in the "Mountain Record", Winter 2013) "To make the wound more beautiful" is a powerful reflection on the life and death of his nephew George. The title is the answer to Brehm's question to the surgeon who performed the liver transplant surgery on John and his nephew. Brehm asked why the surgeon used staples instead of stitches. "He paused, his hand poised above my abdomen, then pulled from his imperfect English a perfect reply: "To make the wound... more beautiful."

Brehm's poem could be seen as just such a desire to heal the wound of losing his beloved nephew George. George was a kindred spirit, lover of books, poems and Saigyo. The last a Korean Poet who lived in Kyoto, the same city that George worked and where John had traveled to have the liver transplant. The poem offers healing to wounded hearts of those who have loved someone who has died. Focusing not so much on loss but on the life gained while living and sharing with those who touch us.

A particularly beautiful image is interaction between the Korean Surgeons and nurses and George and his family.

"that after they cut him loose from all the machines, let his body go like a small boat drifting from the shore, as my brother and his wife held vigil beside the bed, the doctors and nurses who served and tried to save him came into the room and stood in stillness for over an hour until it was over - until the strong young heart stopped. He had been brain dead for 10 days but still with us, rocking gently on the surface. And then they all rode the elevator down together, the same elevator we had taken up so many times, big enough for gurneys and wheelchairs and huge anxious silences. And when his body had been placed inside the hearse that waited to enter the flurried stream of Marutamachi Street, they bowed a long low bow, held it until the car was gone."

hmmm. yes. beautiful. Love the long low bow till the car was gone.

Saigyo was a warrior turned monk and a common love of both John and George. He wrote:

"Detached" observer
of blossoms finds himself in time
Intimate with them -
So, when they separate from the branch,
It's he who falls... deeply into grief.

May we all lose our detached observer and surrender ourselves to the long low bow to all beings around us, making the wounds of our hearts and minds beautiful in the process.