filed under: poetry
Reply ✍ Transcribed
From My Window To The World by Demetrics McCauley (author's profile)
Share this:
uploaded May 21, 2013.  Original (PDF) 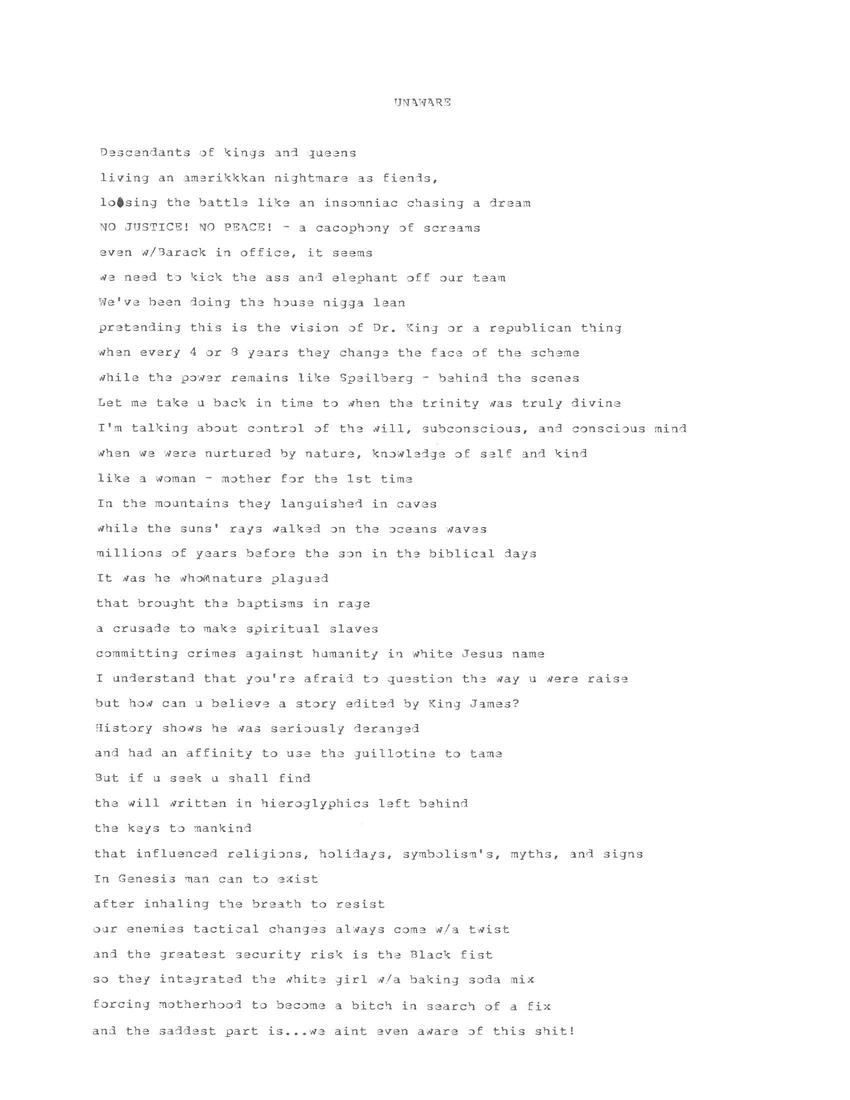 Descendants of kings and queens
Living an Amerikkkan nightmare as fiends,
Losing the battle like an insomniac chasing a dream
NO JUSTICE! NO PEACE! - a cacophony of screams
Even w/Barack in office, it seems
We need to kick the ass and elephant off our team
We've been doing the house nigga lean
Pretending this is the vision of Dr. King or a Republican thing
When every 4 or 8 years they change the face of the scheme
While the power remains like Spielberg - behind the scenes
Let me take u back in time to when the trinity was truly divine
I'm talking about control of the will, subconscious, and conscious mind
When we were nurtured by nature, knowledge of self and kind
Like a woman - mother for the 1st time
In the mountains they languished in caves
While the sun's rays walked on the ocean's waves
Millions of years before the son in the biblical days
It was he whom nature plagued
That brought the baptisms in rage
A crusade to make spiritual slaves
Committing crimes against humanity in white Jesus' name
I understand that you're afraid to question the way u were raised
But how can u believe a story edited by King James?
History shows he was seriously deranged
And had an affinity to use the guillotine to tame
But if u seek u shall find
The will written in hieroglyphics left behind
The keys to mankind
That influenced religions, holidays, symbolisms, myths, and signs
In Genesis man can to exist
After inhaling the breath to resist
Our enemies' tactical changes always come w/a twist
And the greatest security risk is the Black fist
So they integrated the white girl w/a baking soda mix
Forcing motherhood to become a bitch in search of a fix
And the saddest part is... we ain't even aware of this shit!