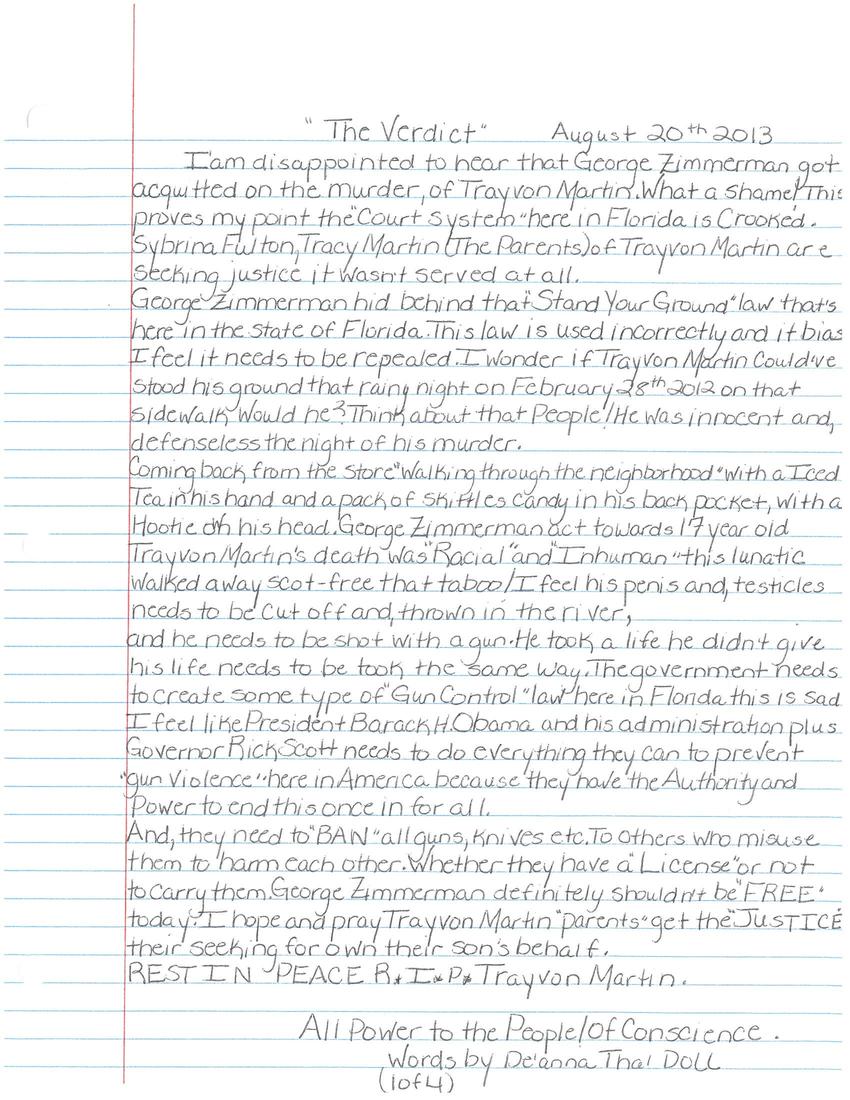 I am disappointed to hear that George Zimmerman got acquitted on the murder of Trayvon Martin. What a shame! This proves my point the 'Court System' here in Florida is Crooked. Sybrina Fulton, Tracy Martin (the parents) of Trayvon Martin are seeking justice it wasn't served at all.

George Zimmerman hid behind that 'Stand Your Ground' law that's here in the state of Florida. This law is used incorrectly and is biased. I feel it needs to be repealed. I wonder if Trayvon Martin could've stood his ground that rainy night on February 28th 2012 on that sidewalk, would he? Think about that, people! He was innocent and defenseless the night of his murder.

Coming back from the store 'walking through the neighbourhood' with an iced tea in his hand and a pack of skittles candy in his back pocket, with a Hootie on his head. George Zimmerman act towards 17 year old Trayvon Martin's death was 'racial' and 'inhuman', this lunatic walked away scot-free that taboo! I feel his penis and testicles needs to be cut off and thrown in the river, and he needs to be shot with a gun. He took a life he didn't give his life needs to be took in the same way. The government needs to create some type of 'gun control' law here in Florida this is sad I feel like President Barak H Obama and his administration plus Governor Rick Scott needs to do everything they can to prevent 'gun violence' here in America because they have the Authority and Power to end this once and for all.

And, they need to 'BAN' all guns, knives, etc. To others who misuse them to harm each other. Whether they have a 'License' or not to carry them. George Zimmerman definitely shouldn't be 'FREE' today. I hope and pray Travon Martin 'parents' get the 'JUSTICE' they're seeking for on their son's behalf.

All Power to the People of Concience.
Words by De'anna Tha' Doll (1 of 4)

This comment has been removed for violating our community guidelines which forbid hate speech.

A copy of the posting guidelines is here:

https://betweenthebars.org/about/guidelines/
Woody, you are factually incorrect, and incorrect in your assessment about how racism works in America. Read a direct quote from Wikipedia about the Trayvon shooting, and then I'd recommend looking up stats about who gets acquitted / convicted based on race (they do not support your argument):

"On the evening of February 26, 2012, Zimmerman observed Martin as he returned to the Twin Lakes housing community after having walked to a nearby convenience store.[56] At the time, Zimmerman was driving through the neighborhood on a personal errand.[57]


Zimmerman call to police
MENU0:00
7:09:34 PM, February 26, 2012
Problems playing this file? See media help.
At approximately 7:09 PM,[Note 5] Zimmerman called the Sanford police non-emergency number to report a suspicious person in the Twin Lakes community.[59] Zimmerman stated, "We've had some break-ins in my neighborhood, and there's a real suspicious guy."[3] He described an unknown male "just walking around looking about" in the rain and said, "This guy looks like he is up to no good or he is on drugs or something."[60] Zimmerman reported that the person had his hand in his waistband and was walking around looking at homes.[61] On the recording, Zimmerman is heard saying, "these assholes, they always get away."[62][63]

About two minutes into the call, Zimmerman said, "he's running".[17] The dispatcher asked, "He's running? Which way is he running?"[64] Noises on the tape at this point have been interpreted by some media outlets as the sound of a car door chime, possibly indicating Zimmerman opened his car door.[65] Zimmerman followed Martin, eventually losing sight of him.[17] The dispatcher asked Zimmerman if he was following him. When Zimmerman answered, "yeah", the dispatcher said, "We don't need you to do that." Zimmerman responded, "Okay."[66] Zimmerman asked that police call him upon their arrival so he could provide his location.[17] Zimmerman ended the call at 7:15 p.m.[17]

After Zimmerman ended his call with police, a violent encounter took place between Martin and Zimmerman, which ended when Zimmerman fatally shot Martin 70 yards (64 m) from the rear door of the townhouse where Martin was staying.[67][Note 6]"
(scanned reply – view as blog post)
uploaded May 11, 2014.  Original (PDF) 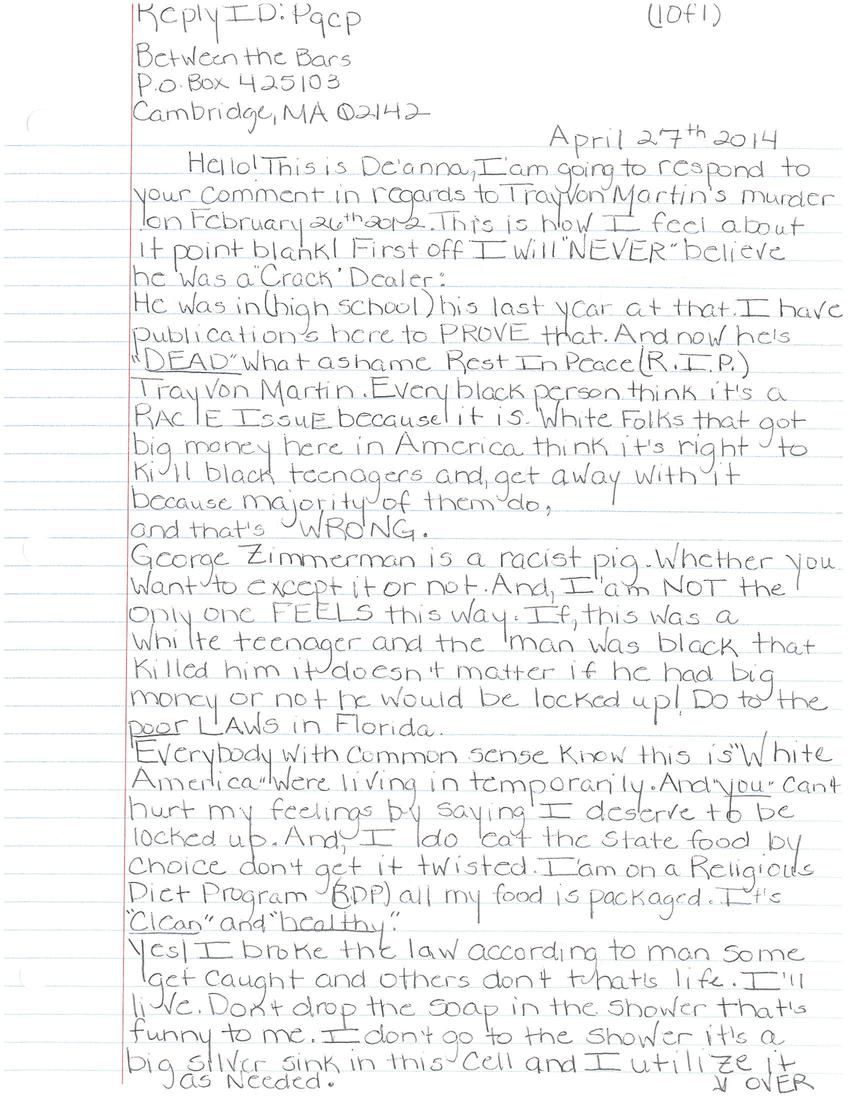