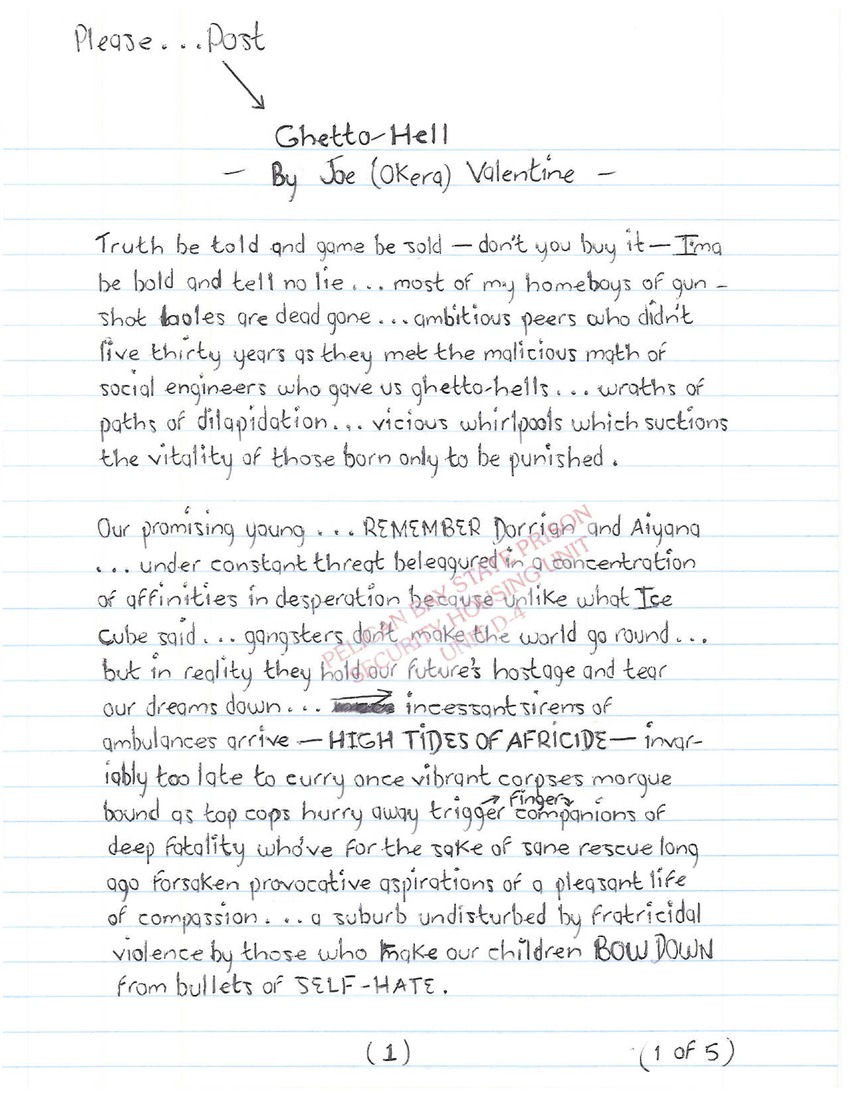 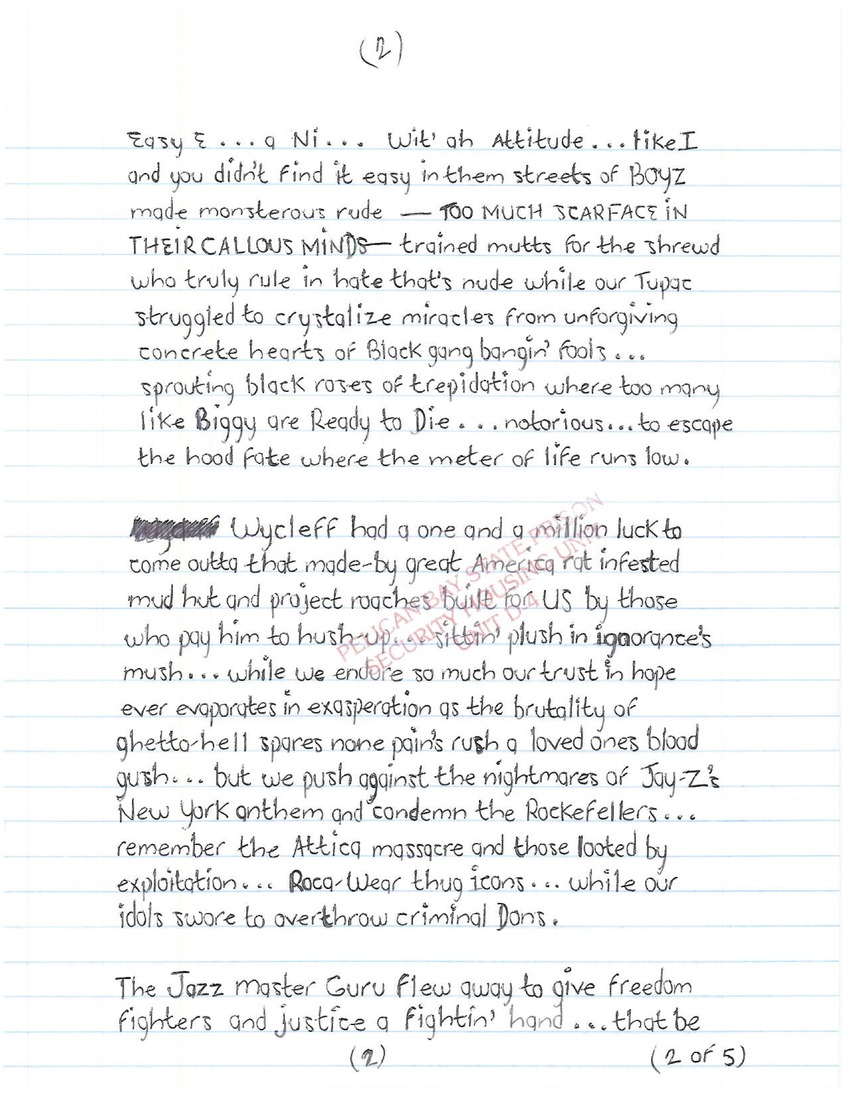 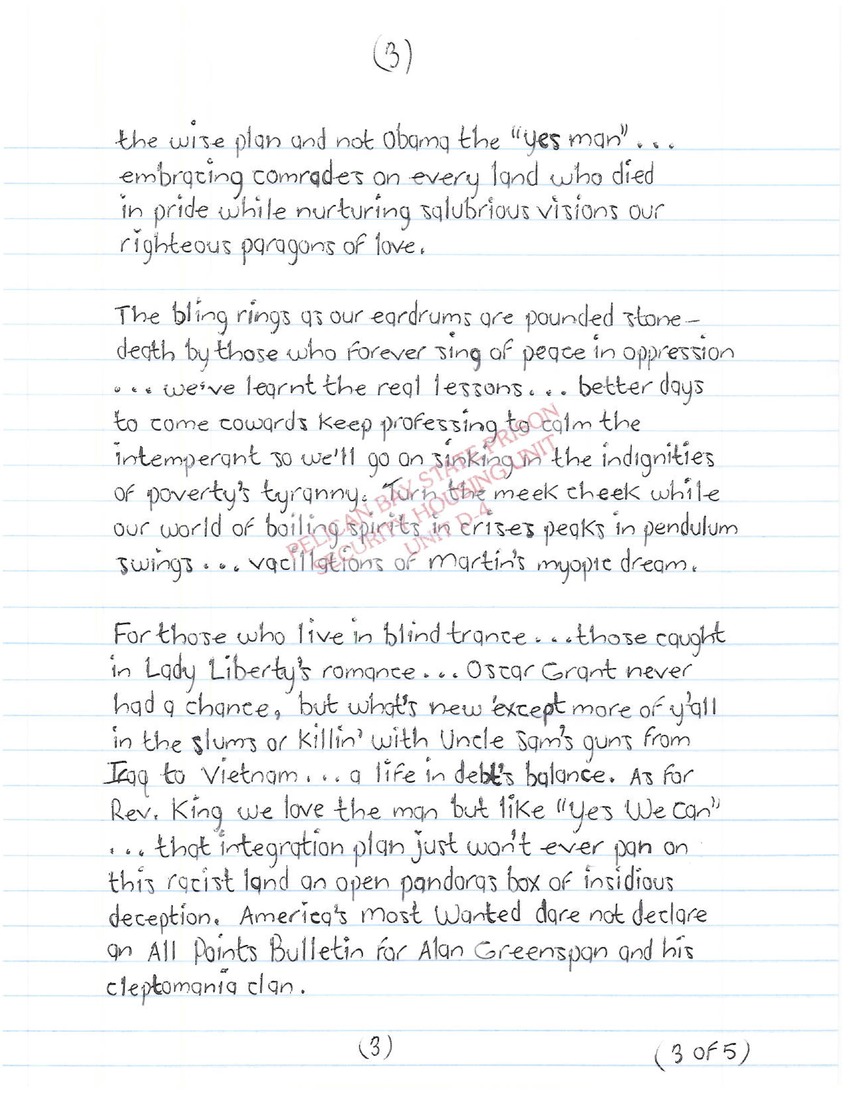 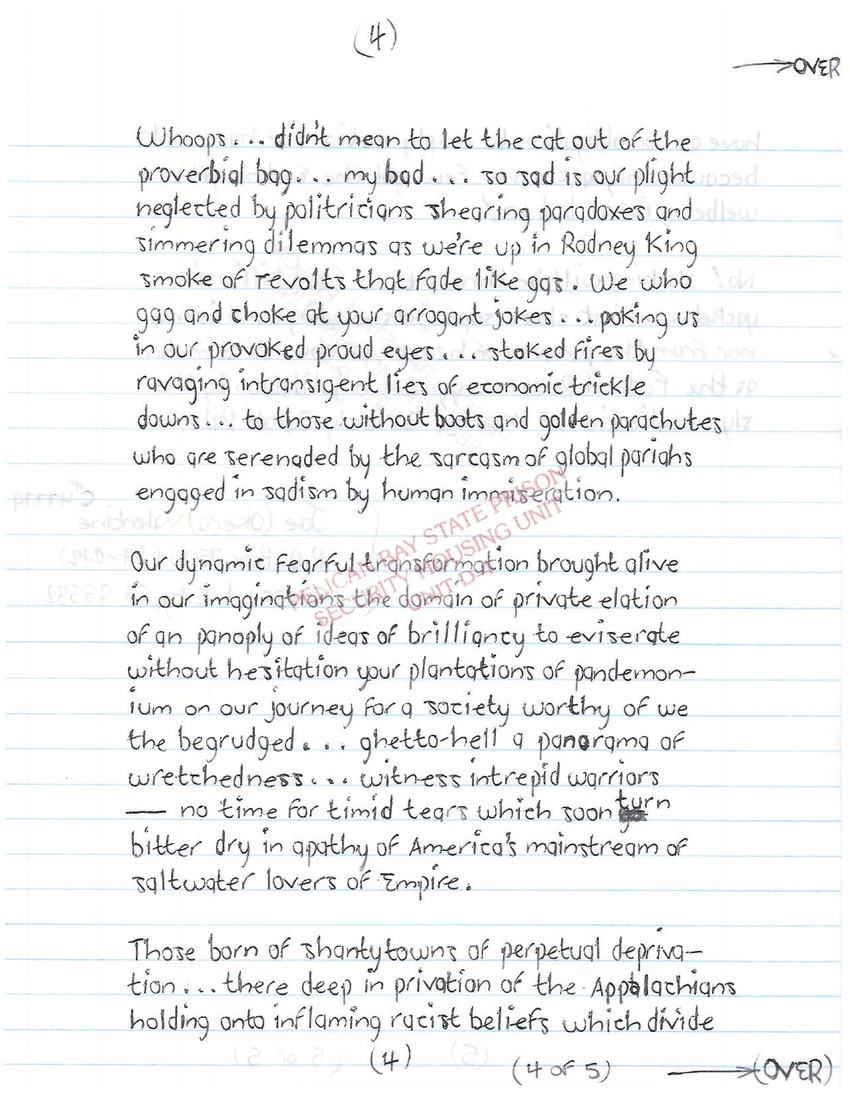 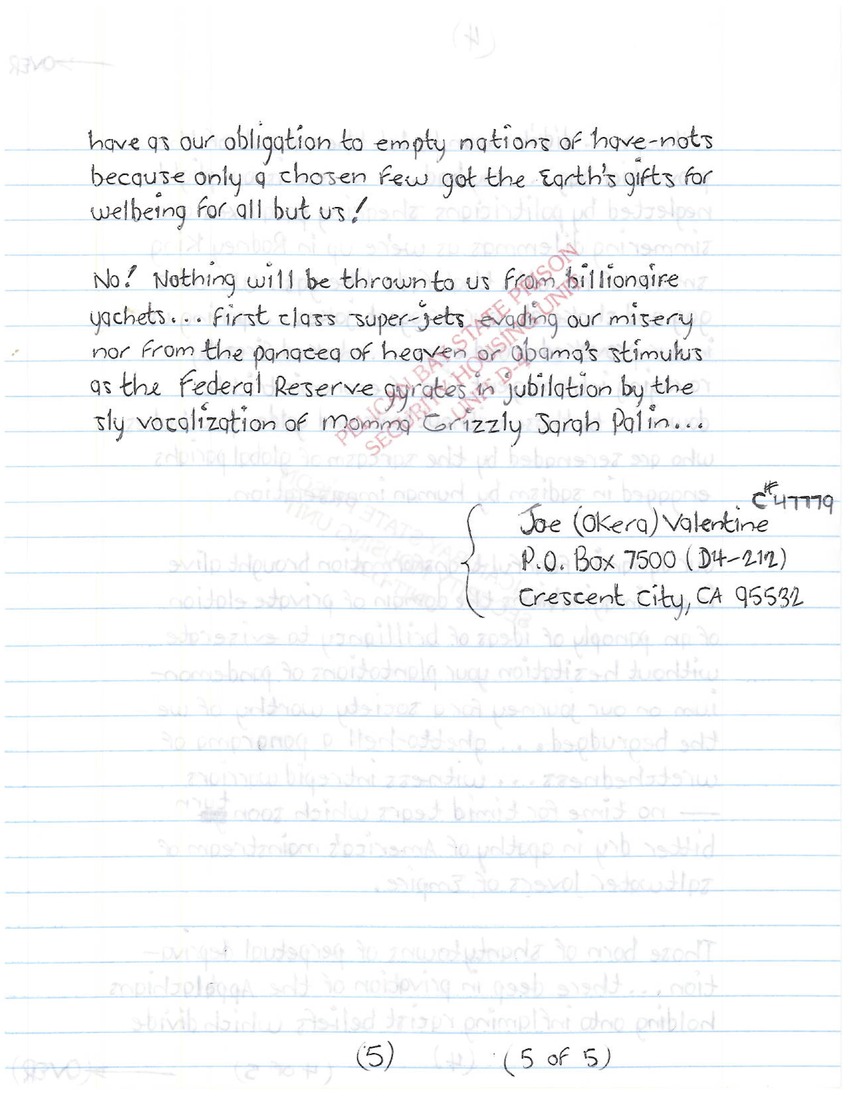 Truth be told and game be sold—don't you buy it—I'ma be bold and tell no lie. Most of my homeboys of gunshot looles are dead gone. Ambitious peers who didn't live thirty years as they met the malicious myth of social engineers who gave us ghetto hells, wraths of paths of dilapidation, vicious whirlpools which suctions the vitality of those born, only to be punished.

Our promising youth. Remember Dorrian and Aiyana. They're under constant threat, beleaguered in a concentration of affinities in desperation because unlike what Ice Cube said, "Gangsters don't make the world go round." But in reality, they hold our futures hostage and tear our dreams down. Incessant sirens of ambulances arrive. HIGH TIDES OF AFRICIDE. Invariably too late to curry once vibrant corpses morgue bound as top cops hurry away, trigger fingers companions of deep fatality—who've for the sake of sane—rescue long ago forsaken provocative aspirations of a pleasant life of compassion. A suburb undistributed by fratricidal violence by those who make children BOW DOWN from bullets of SELF-HATE.

Easy E... a NI... Wit' ah attitude. Like you and I don't find it easy in them streets of BOYZ made monstrous, rude. Too much Scarface in their callous minds. Tainted mutts for the shrewd who truly rule in hate that's nude. While our Tupac struggled to crystallize miracles from unforgiving concrete hearts of black gang bangin' fools sprouting black roses of trepidation, where too many like Biggy are ready to die. Notorious. To escape the hood fate where the meter of life runs low.

Wycleff had a one and a million luck to come outta that made-by great America rat-infested mud hut and project roaches built for US by those who pay him to hush-up. Sittin' plush in ignorance's mush—while we endure so much. Our trust in hope ever evaporates in exasperation as the brutality of ghetto hell spares none. Pain's rush a loved one's blood gush. But we push against the nightmares of Jaz-Z's New York anthem and condemn the Rockefeller. Remember the Attica massacre and those looted by exploitation. Roca-Wear thug icons, while our idols swore to overthrow criminal dons.

The jazz master guru flew away to give freedom fighters and justice a fightin' hand. That be the wise plan. And not Obama, the "yes" man. Embracing comrades on every land who died in pride while nurturing salubrious visions, our righteous paragons of love.

The bling rings as our eardrums are pounded stone-death by those who forever sin of peace in oppression. We've learned the real lessons. Better days to come. Cowards keep professing to calm the intemperance so we'll go on sinking in the indignities of poverty's tyranny. Turn the meek cheek while our world of boiling spirits in crises peaks in pendulum swings. Vacillations of Martin's myopic dream.

For those who live in blind trance, those caught in Lady Liberty's romance, Oscar Grant never had a chance. But what's new, except more of y'all in the slums or killin' with Uncle Sam's guns from Iraq to Vietnam. A life in debt's balance. As for Rev. King, we love the man. But like "Yes we can" that integration plan just won't ever pan on this racist land—an open Pandora's box of insidious deception. America's most wanted dare not declare an all points bulletin for Alan Greenspan and his kleptomania clan.

Whoops. Didn't mean to let the cat of the proverbial bag. My bad. So sad is our plight. Neglected by politricians, shearing paradoxes and simmering dilemmas as we're in Rodney King smoke of revolts that fade like gas. We, who gag and choke at your arrogant jokes, poking us in our provoked, proud eyes, staked fires by ravaging intransigent lies of economic trickle downs. To those without boots and golden parachutes, who are serenaded by the sarcasm of global pariahs, engaged in sadism by human immiseration.

Our dynamic fearful transformation brought alive in our imaginations the domain of private elation of a panoply of ideas of brilliancy to eviscerate, without any hesitation, your plantations of pandemonium on our journey for a society worthy of we, the begrudged. Ghetto hell, a panorama of wretchedness, witness intrepid warriors—no time for timid tears which soon turn bitter dry in apathy of America's mainstream of saltwater lovers of Empire.

Those born of shanty towns of perpetual deprivations—there, deep in privation of the Appalachians, holding onto inflaming racist beliefs which divide—have as our obligation to empty nations of have-nots because only a chosen few got the Earth's gifts for wellbeing for all but us!

No! Nothing will be thrown to us from billionaire yachts, first-class super jets evading our misery, nor from the panacea of heaven or Obama's stimulus; as the Federal Reserve gyrates in jubilation by the sly vocalizations of Momma Grizzly Sarah Palin...