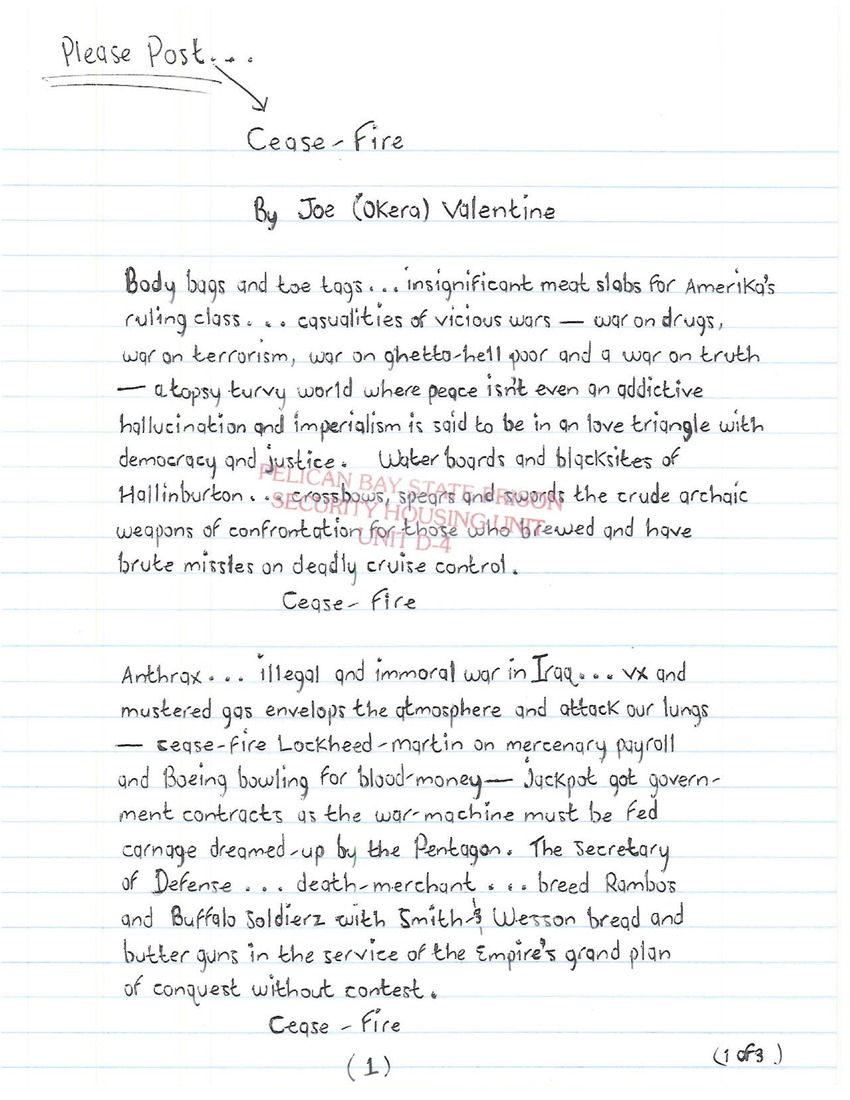 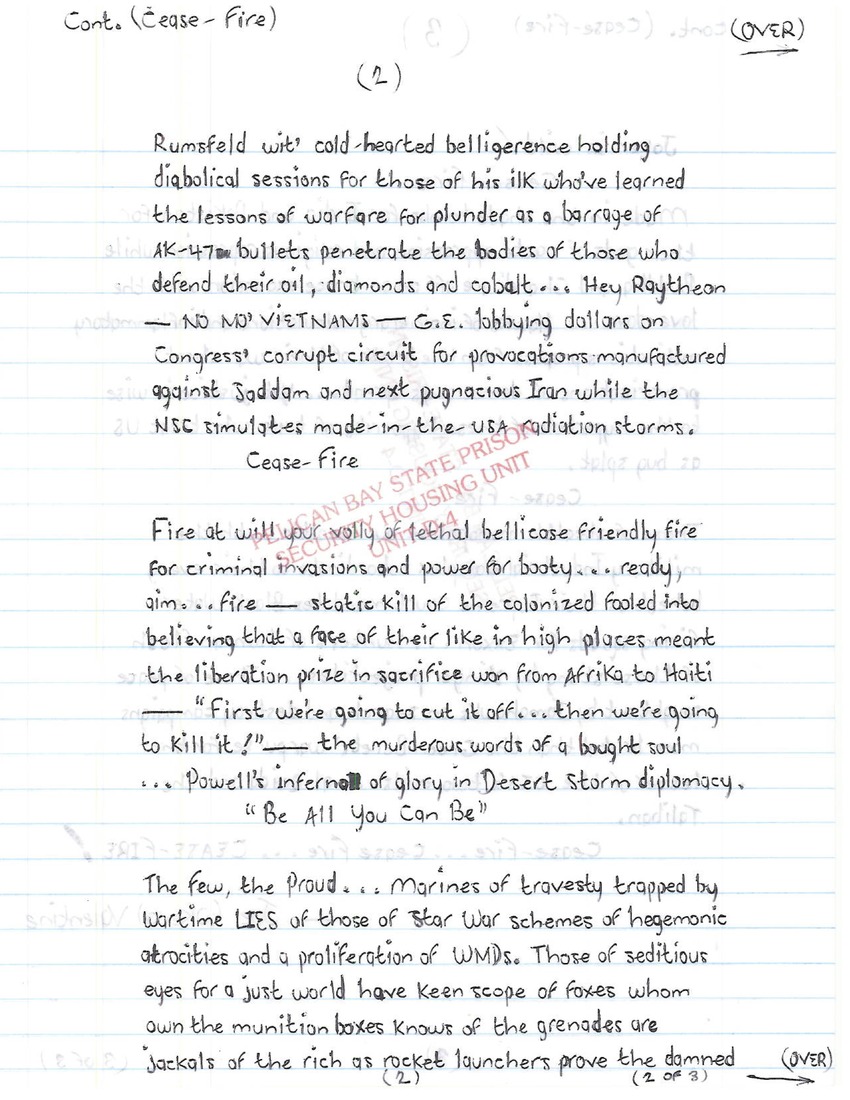 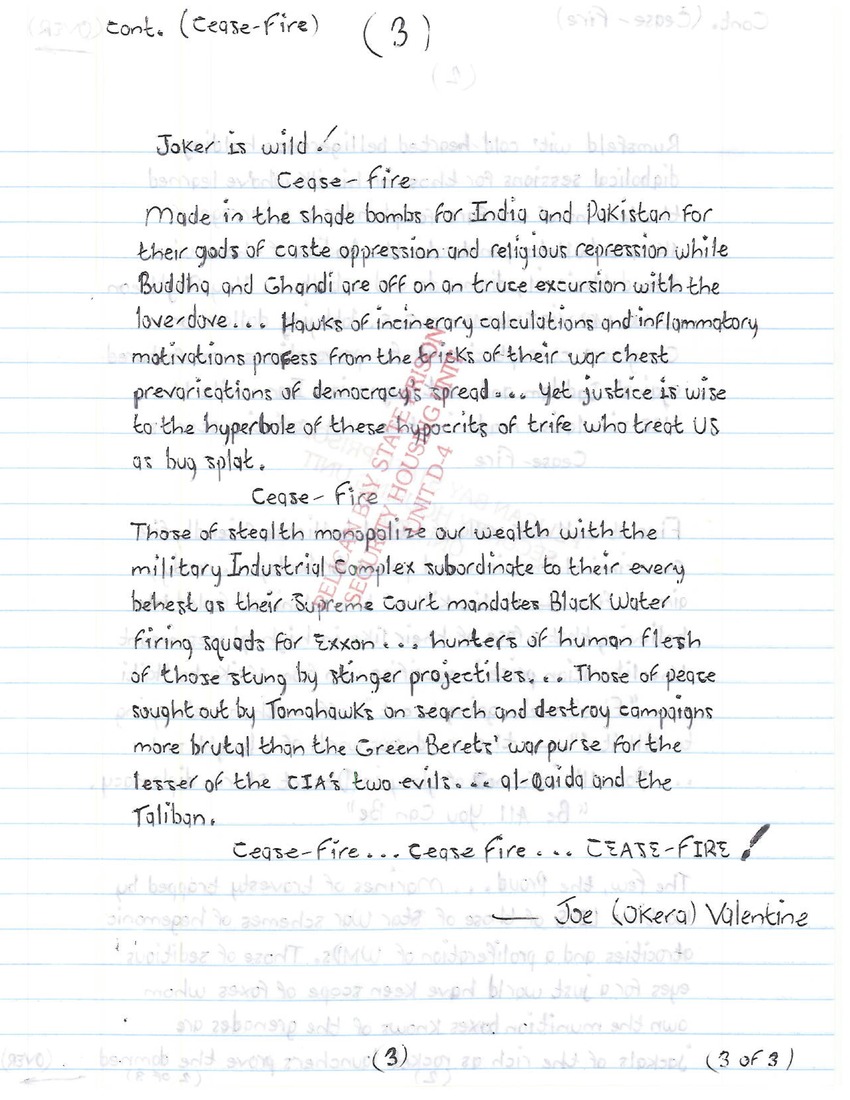 Body bags and toe tags...insignificant meat slabs for Amerika's ruling class...casualties of vicious wars - war on drugs, war on terrorism, war on ghetto-hell poor and a war on truth - a topsy turvy world where peace isn't even an addictive hallucination and imperialism is said to be in a love triangle with democracy and justice. Water boards and blacksites of Hallinburton...crossbows, spears and swords the crude archaic weapons of confrontation for those who brewed and have brute missiles on deadly cruise control.
Cease-Fire

Anthrax...illegal and immoral war in Iraq...vx and mustered gas envelops the atmosphere and attack our lungs - cease-fire Lockheed-Martin on mercenary payroll and Boeing bowling for blood-money - jackpot got government contracts ass the war-machine must be fed carnage dreamed up by the Pentagon. The secretary of Defense...death-merchant...breed Rambos and Buffalo Soldiers with Smith & Wesson bread and butter guns in the service of the Empire's grand plan of conquest without contest.
Cease-Fire
(1) (1 of 3)

Rumsfeld wit' cold-hearted belligerence holding diabolical sessions for this of his ilk who've learned the lessons of warfare for plunder as a barrage of AK-47 bullets penetrate the bodies of those who defend their oil, diamonds and cobalt... Hey Raytheon - NO MO' VIETNAMS - G.E. lobbying dollars on Congress' corrupt circuit for provocations manufactured against Saddam and next pugnacious Iran while the NSC simulates made-in-the-USA radiation storms.
Cease-Fire

Fire at will your volley of lethal bellicose friendly fire for criminal invasions and power for booty... ready, aim... fire - static kill of the colonized fooled into believing that a face of their like in high places meant the liberation prize in sacrifice won from Afrika to Haiti - "first we're going to cut it off... then we're going to kill it!" - the murderous words of a bought soul... Powell's inferno of glory in Desert Storm diplomacy.
"Be All You Can Be"

The few, the proud... Marines of travesty trapped by wartime LIES of those of star war schemes of hegemonic atrocities and a proliferation of WMDs. Those of seditious eyes for a just world have keen scope of foxes whom own the munition boxes knows of the grenades are jackals of the rich as rocket launchers prove the damned (2) (2 of 3) (OVER)

Joker is wild!
Cease-Fire
Made in the shade bombs for India and Pakistan for their gods of caste oppression and religious repression while Buddha and Ghandi are off on a truce excursion with the love-dove... Hawks of incinerary calculations and inflammatory motivations process from the tricks of their war chest prevarications of democracy spread... Yet justice is wise to the hyperbole of the hypocrites of trife who treat US a bug splat.
Cease-Fire
Those of stealth monopolize our wealth with the military Industrial Complex subordinate to their every behest as their Supreme Court mandates Black Water firing squads for Exxon... hunters of human flesh of those stung by stinger projectiles... Those of peace sought out by Tomahawks on search and destroy campaigns more brutal that the Green Berets' war purse for the lesser of the CIA's two evils... al-Qaida and the Taliban.
Cease-Fire...Cease Fire...CEASE-FIRE!