The Death Of Herbert Earl And The Consummate Con ARtist 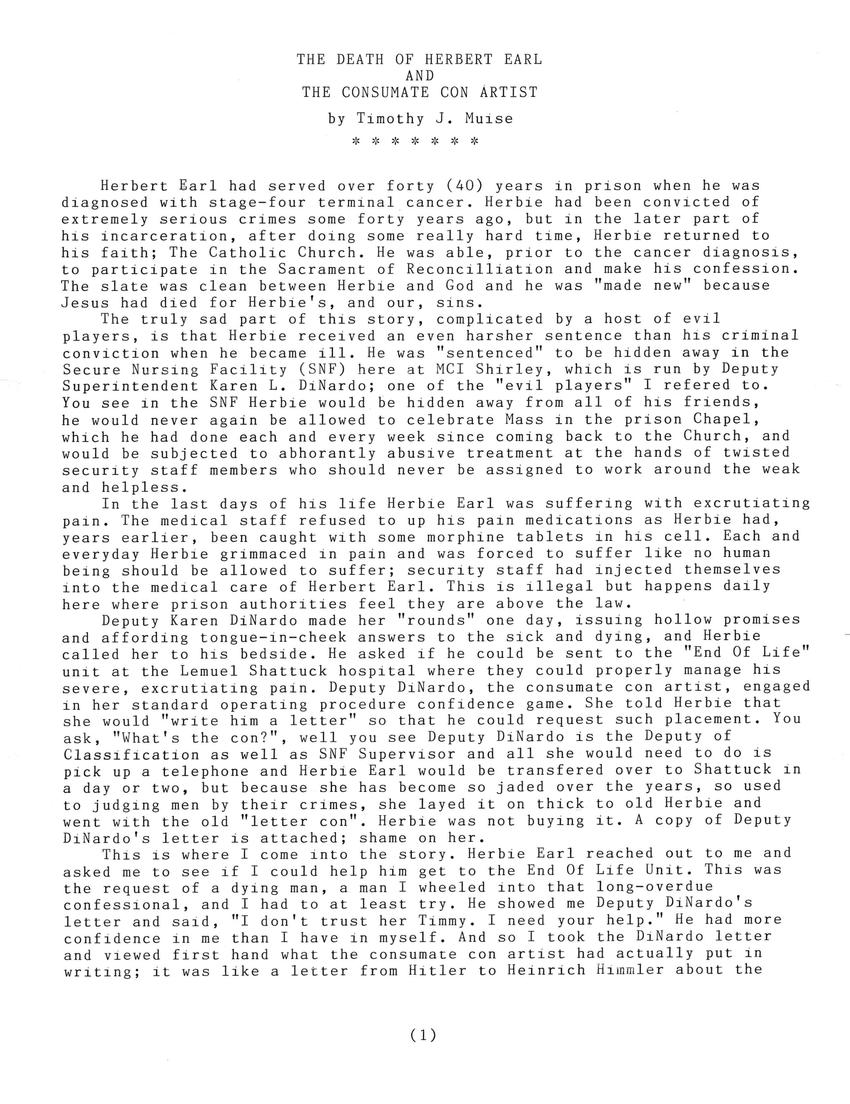 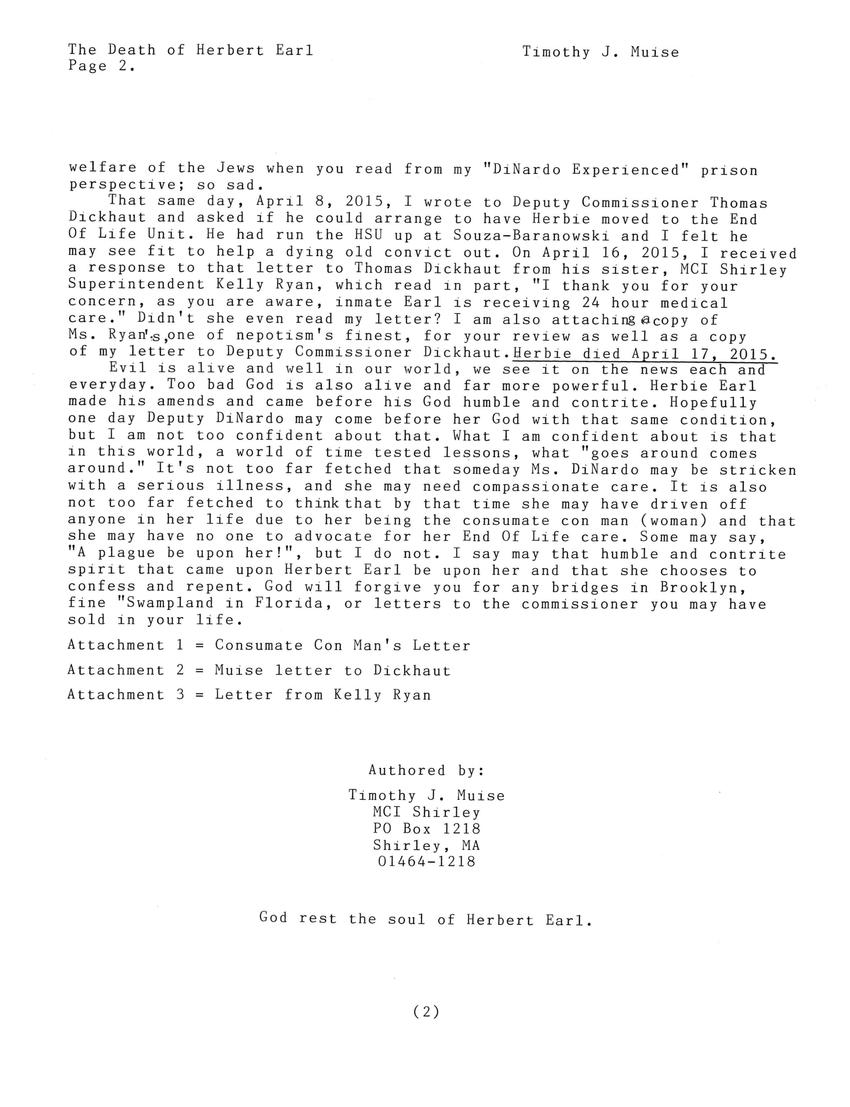 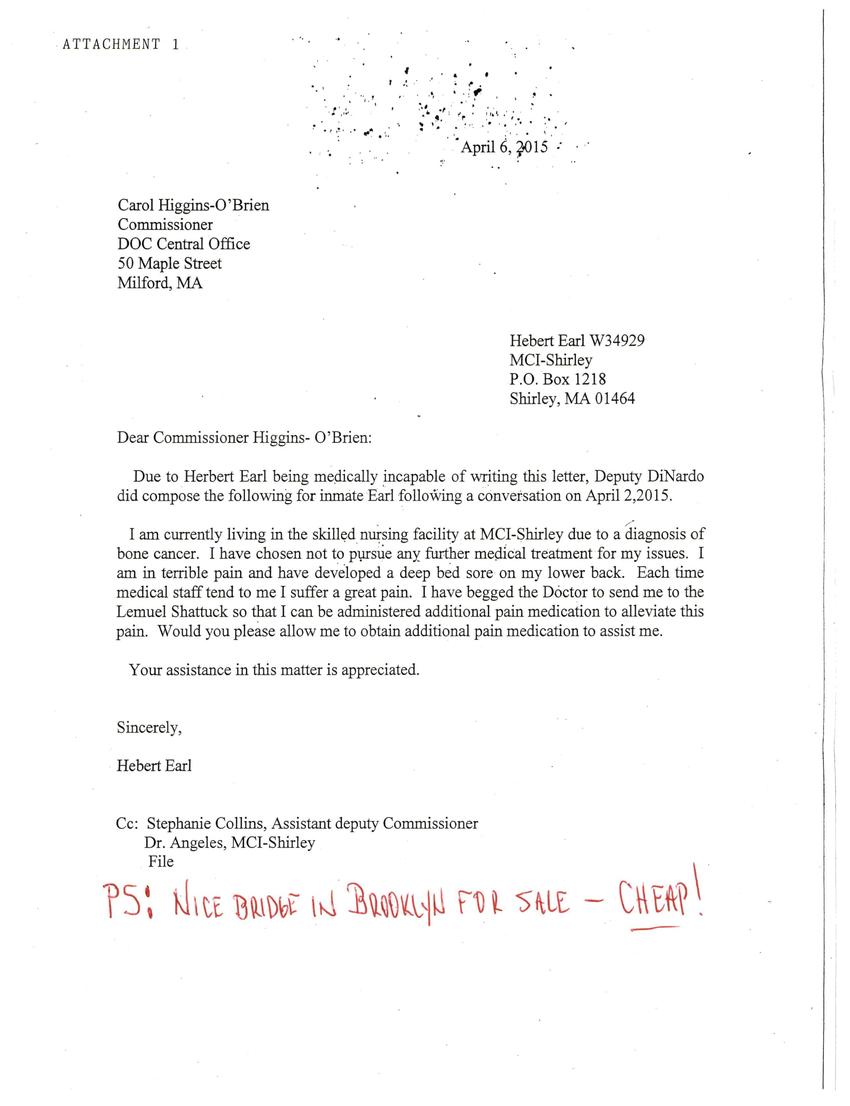 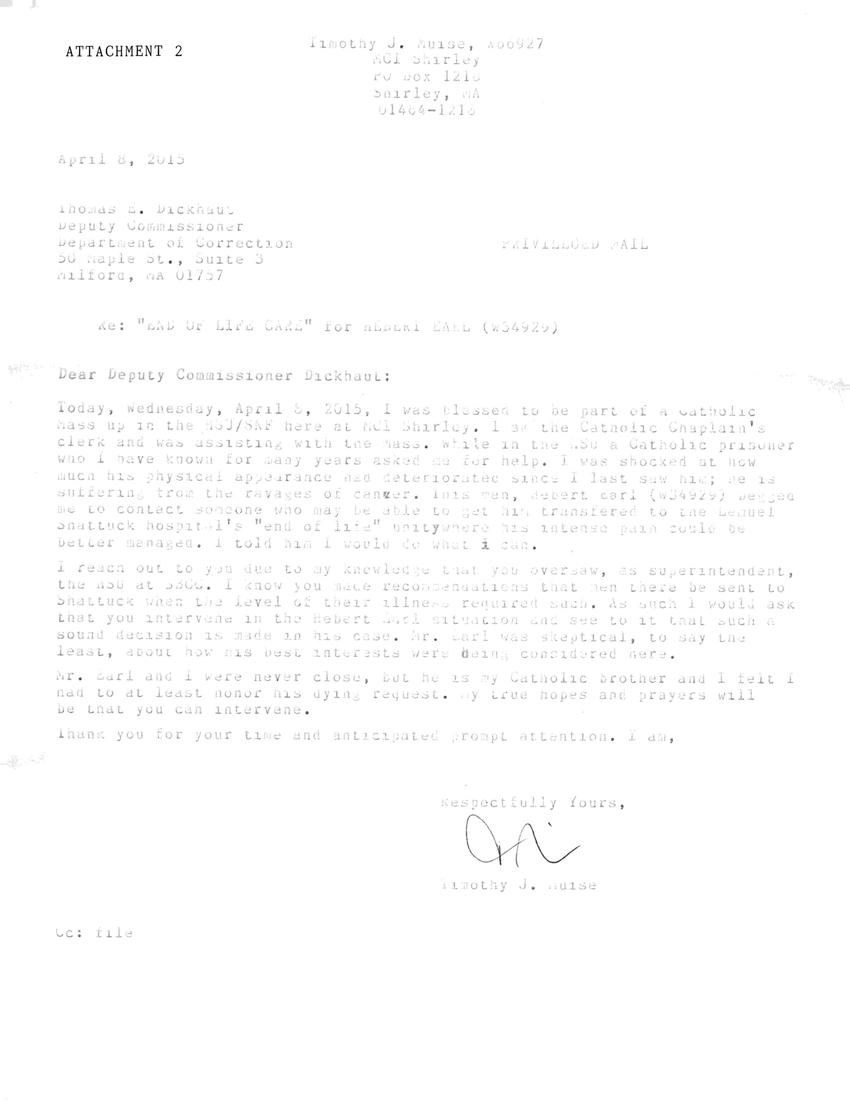 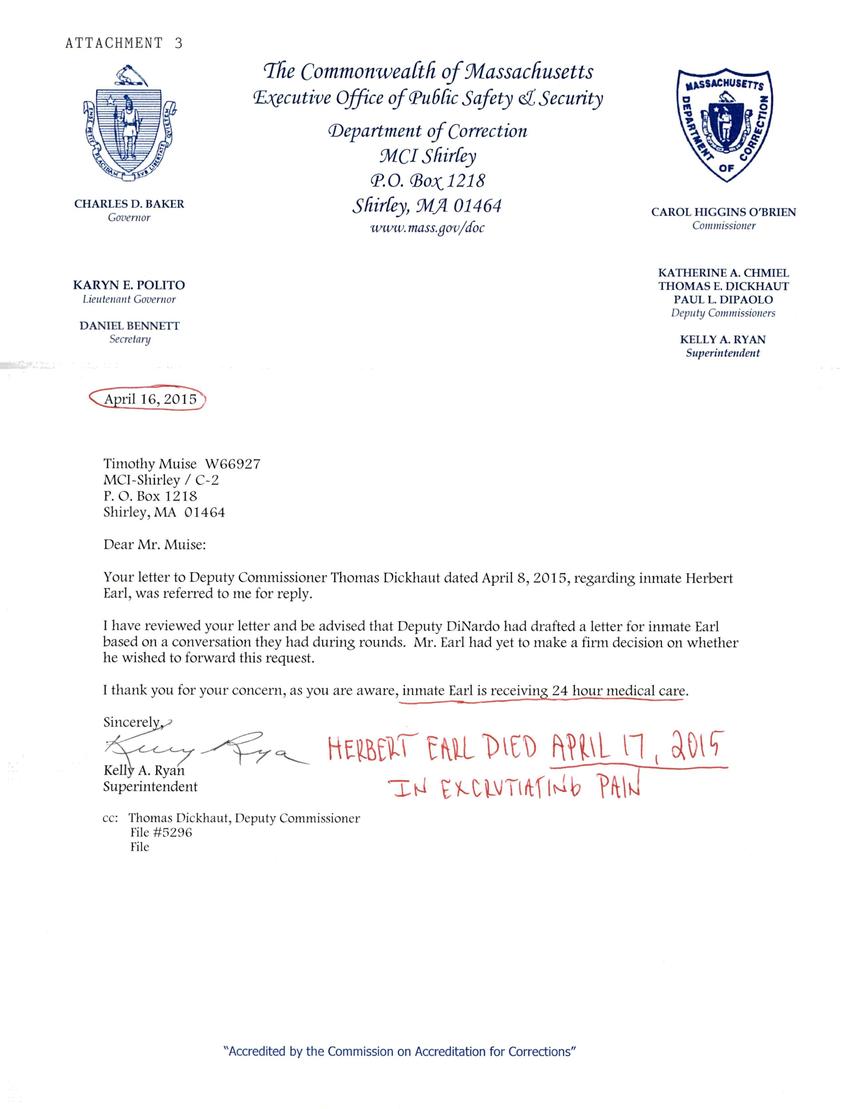 THE DEATH OF HERBERT EARL
AND
THE CONSUMMATE CON ARTIST
by Timothy J. Muise
# # * * # * *
Herbert Earl had served over forty (40) years in prison when he was
Diagnosed with stagefour terminal cancer. Herbie had been convicted of
Extremely serious crimes some forty years ago, but in the later part of
His incarceration, after doing some really hard time, Herbie returned to
His faith; The Catholic Church. He was able, prior to the cancer diagnosis,
to participate in the Sacrament of Reconciliation and make his confession.
The slate was clean between Herbie and God and he was "made new" because
Jesus had died for Herbie's, and our, sins.
The truly sad part of this story, complicated by a host of evil
Players, is that Herbie received an even harsher sentence than his criminal
Conviction when he became ill. He was "sentenced" to be hidden away in the
Secure Nursing Facility (SNF) here at MCI Shirley, which is run by Deputy
Superintendent Karen L. DiNardo; one of the "evil players" I referred to.
You see in the SNF Herbie would be hidden away from all of his friends,
he would never again be allowed to celebrate Mass in the prison Chapel,
which he had done each and every week since coming back to the Church, and
Would be subjected to abhorrently abusive treatment at the hands of twisted
Security staff members who should never be assigned to work around the weak
And helpless.
In the last days of his life Herbie Earl was suffering with excruciating
Pain. The medical staff refused to up his pain medications as Herbie had,
years earlier, been caught with some morphine tablets in his cell. Each and
Everyday Herbie grimaced in pain and was forced to suffer like no human
Being should be allowed to suffer; security staff had injected themselves
Into the medical care of Herbert Earl. This is illegal but happens daily
Here where prison authorities feel they are above the law.
Deputy Karen DiNardo made her "rounds" one day, issuing hollow promises
And affording tonguein-cheek answers to the sick and dying, and Herbie 
called her to his bedside. He asked if he could be sent to the "End Of Life"
unit at the Lemuel Shattuck hospital where they could properly manage his
Severe, excruciating pain. Deputy DiNardo, the consummate con artist, engaged
In her standard operating procedure confidence game. She told Herbie that
She would "write him a letter" so that he could request such placement. You
Ask, "What's the con?", well you see Deputy DiNardo is the Deputy of
Classification as well as SNF Supervisor and all she would need to do is
pick up a telephone and Herbie Earl would be transferred over to Shattuck in
a day or two, but because she has become so jaded over the years, so used
to judging men by their crimes, she layed it on thick to old Herbie and
went with the old "letter con". Herbie was not buying it. A copy of Deputy
DiNardo's letter is attached; shame on her.
This is where I come into the story. Herbie Earl reached out to me and
asked me to see if I could help him get to the End Of Life Unit. This was
the request of a dying man, a man I wheeled into that long~overdue
confessional, and I had to at least try. He showed me Deputy DiNardo's
letter and said, "I don't trust her Timmy. I need your help." He had more
confidence in me than I have in myself. And so I took the DiNardo letter
and viewed first hand what the consummate con artist had actually put in
writing; it was like a letter from Hitler to Heinrich Himmler about the

Good old Timmy..........never lets the truth get in the way of a good story. And never misses the opportunity of using the suffering of another to fuel his pity party.

Paul
Thanks for writing! I finished the transcription for your post.
(scanned reply – view as blog post)
uploaded Oct. 29, 2015.  Original (PDF) 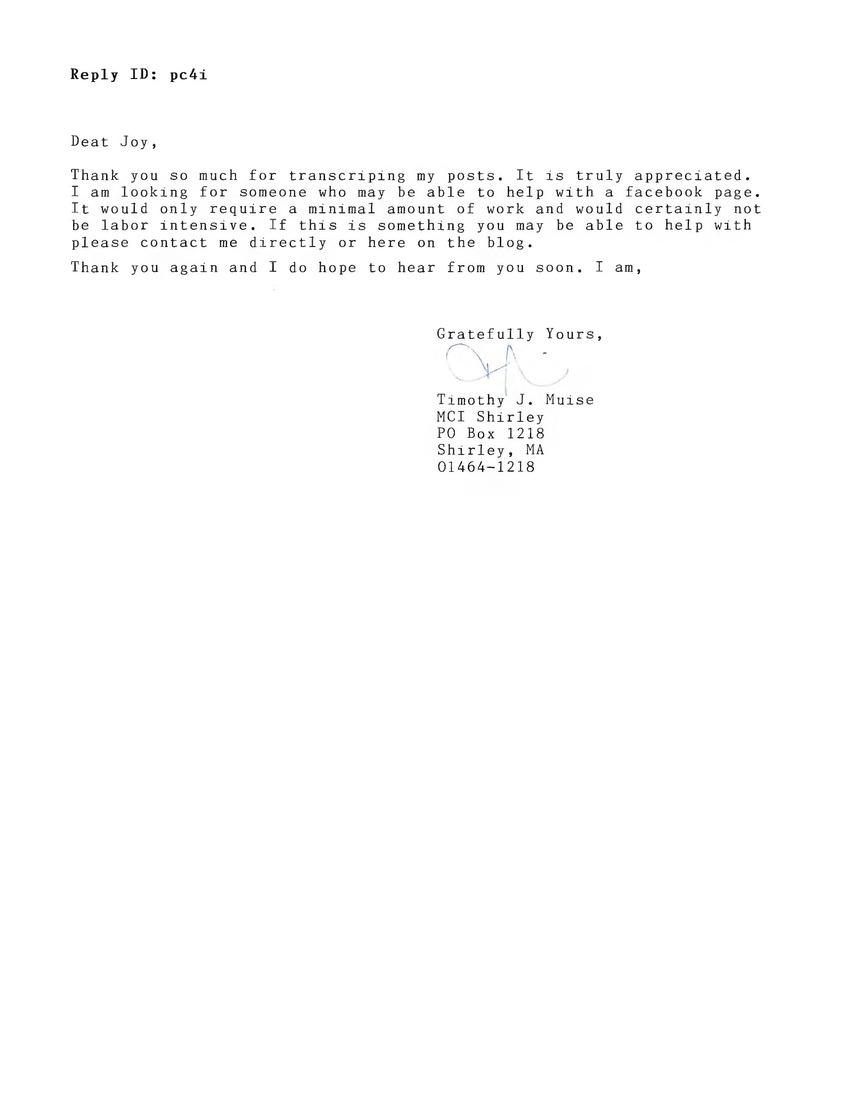