A POEM BY BOBBY SANDS 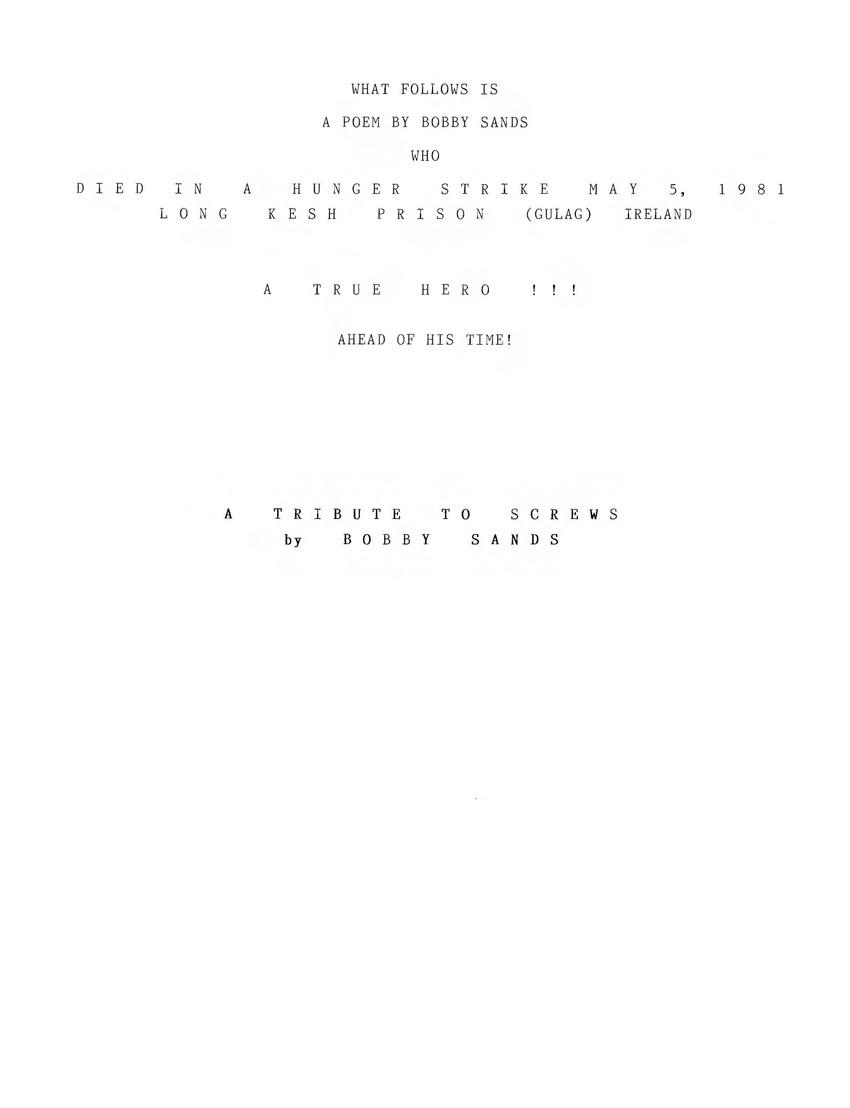 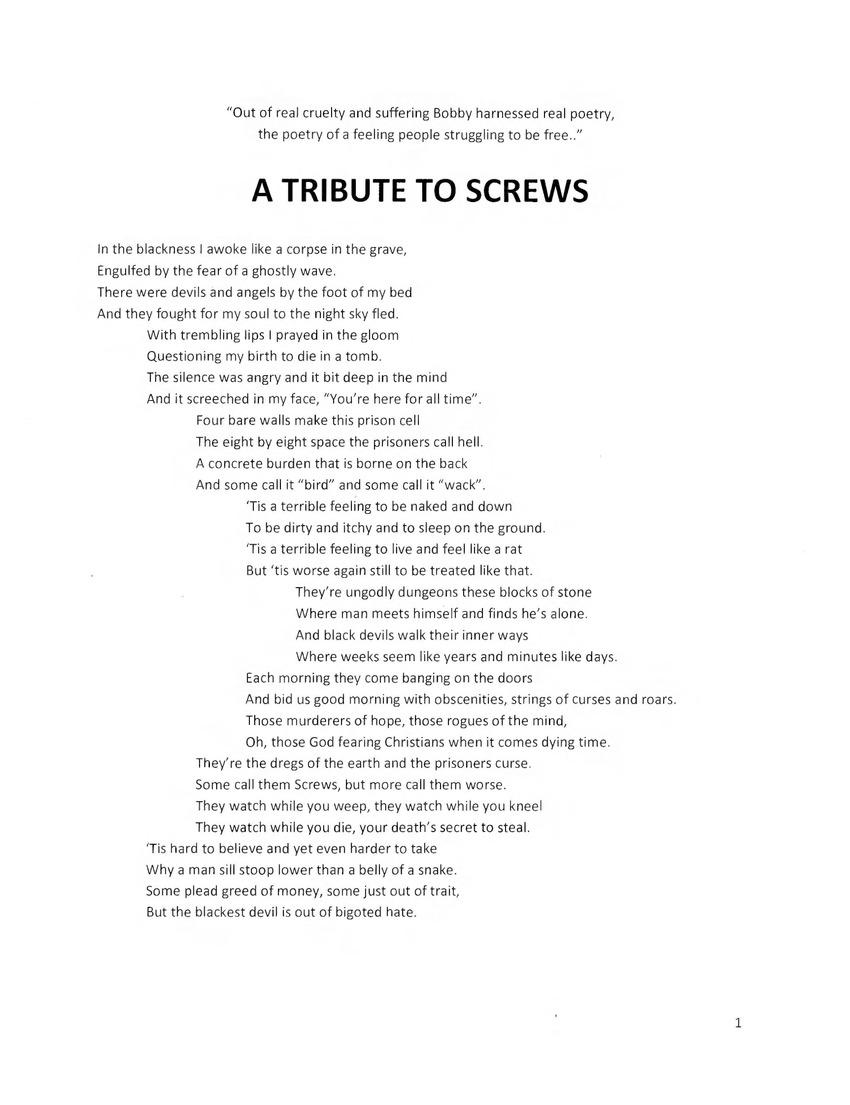 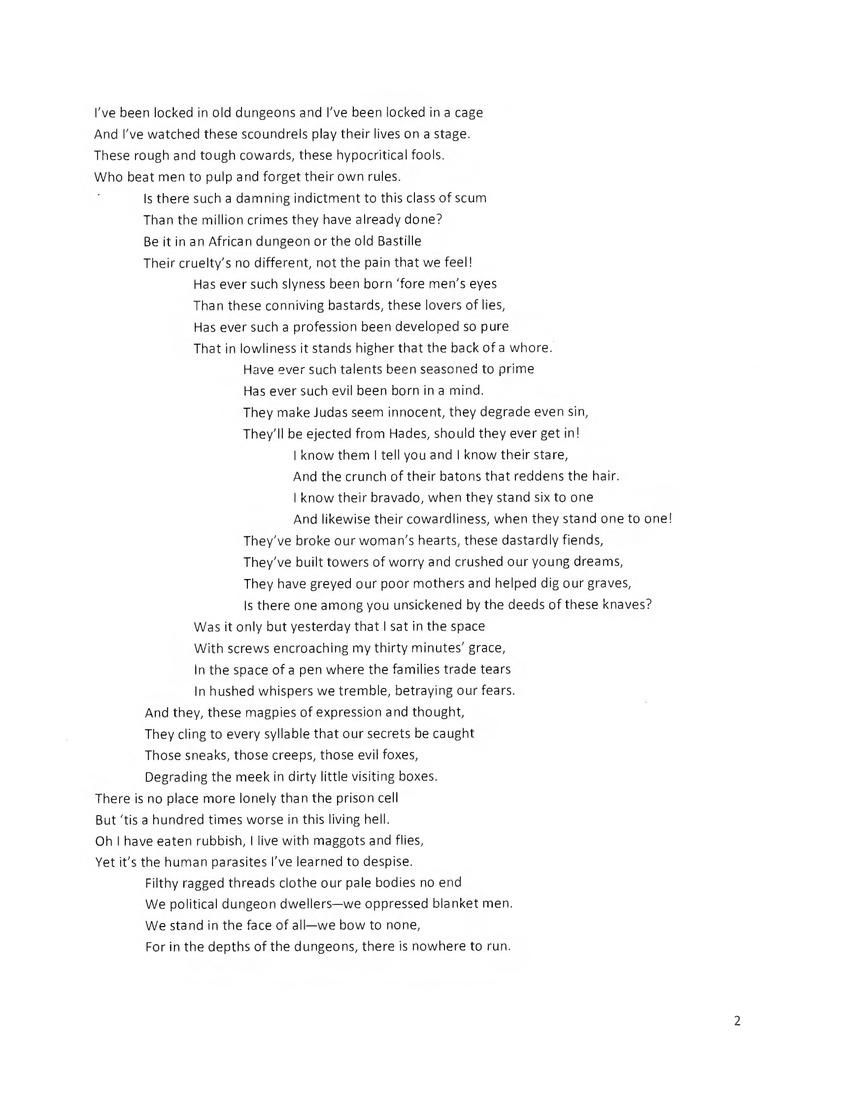 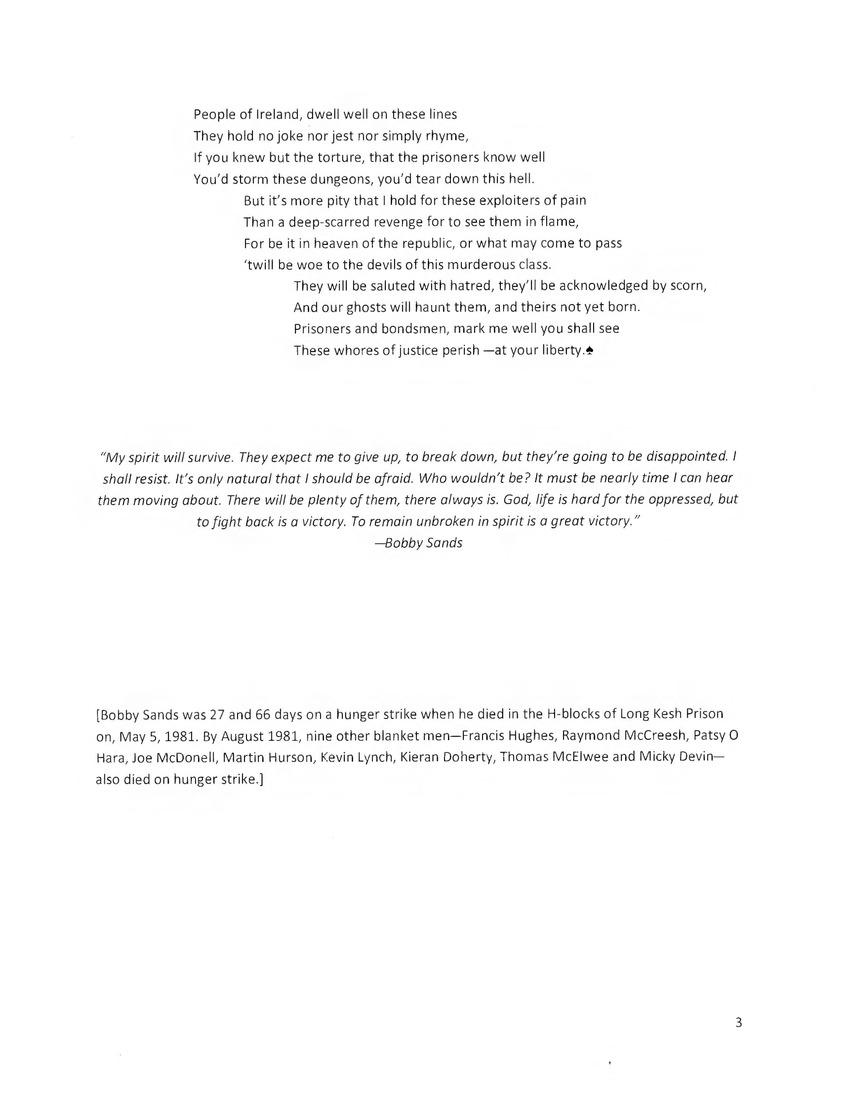 What Follows Is
A Poem By Bobby Sands
Who
Died In A Hunger Strike May 5, 1981
Long Kesh Prison (Gulag) Ireland

Ahead Of His Time!

A Tribute To Screws
by Bobby Sands

"Out of real cruelty and suffering Bobby harnessed real poetry,
the poetry of a feeling people struggling to be free..."

A Tribute To Screws

In the blackness I awoke like a corpse in the grave,
Engulfed by the fear of a ghostly wave.
There were devils and angels by the foot of my bed
And they fought for my soul to the night sky fled.

With trembling lips I prayed in the gloom
Questioning my birth to die in a tomb.
The silence was angry and it bit deep in the mind
And it screeched in my face, "You're here for all time".

Four bare walls make this prison cell
The eight by eight space the prisoners call hell.
A concrete burden that is borne on the back
And some call it "bird" and some call it "wack".

They're ungodly dungeons these blocks of stone
Where man meets himself and finds he's alone.
And black devils walk their inner ways
Where weeks seem like years and minutes like days.

Each morning they come banging on the doors
And bid us good morning with obscenities, strings of curses and roars.
Those murderers of hope, those rogues of the mind,
Oh, those God fearing Christians when it comes dying time.

'Tis hard to believe and yet even harder to take
Why a man will stoop lower than a belly of a snake.
Some plead greed of money, some just out of trait,
But the blackest devil is out of bigoted hate.

I've been locked in old dungeons and I've been locked in a cage
And I've watched these scoundrels play their lives on a stage.
These rough and tough cowards, these hypocritical fools.
Who beat men to pulp and forget their own rules.

Is there such a damning indictment to this class of scum
Than the million crimes they have already done?
Be it in an African dungeon or the old Bastille
Their cruelty's no different, not the pain that we feel!

Has ever such slyness been born 'fore men's eyes
Than these conniving bastards, these lovers of lies,
Has ever such a profession been developed so pure
That in lowliness it stands higher than the back of a whore.

Has ever such talents been seasoned to prime
Has ever such evil been born in a mind.
They make Judas seem innocent, they degrade even sin,
They'll be ejected from Hades, should they ever get in!

They've broken our woman's hearts, these dastardly fiends,
They've built towers of worry and crushed our young dreams,
They have greyed our poor mothers and helped dig our graves,
Is there one among you unsickened by the deeds of these knaves?

Was it only but yesterday that I sat in the space
With screws encroaching my thirty minutes' grace,
In the space of a pen where the families trade tears
In hushed whispers we tremble, betraying our fears.

And they, these magpies of expression and thought,
They cling to every syllable that our secrets be caught
Those sneaks, those creeps, those evil foxes,
Degrading the meek in dirty little visiting boxes.

There is no place more lonely that the prison cell
But 'tis a hundred times worse in this living hell.
Oh I have eaten rubbish, I live with maggots and flies,
Yet it's the human parasites I've learn to despise.

Filthy ragged threads clothe our pale bodies no end
We political dungeon dwellers-we oppressed blanket men.
We stand in the face of all-we bow to none,
For in the depths of the dungeons, there is nowhere to run.

People of Ireland, dwell well on these lines
They hold no joke nor jest nor simply rhyme,
If you knew but the torture, that the prisoners know well
You'd storm these dungeons, you'd tear down this hell.

But it's more pity that I hold for these exploiters of pain
Than a deep-scarred revenge for to see them in flame,
For be it in heaven of the republic, or what may come to pass
'twill be woe to the devils of this murderous class.

They will be saluted with hatred, they'll be acknowledged by scorn,
And our ghosts will haunt them, and theirs not yet born.
Prisoners and bondsmen, mark me well you shall see
These whores of justice perish-at your liberty.

"My spirit will survive. They expect me to give up, to break down, but they're going to be disappointed. I shall resist. It's only natural that I should be afraid. Who wouldn't be? It must be nearly time I can hear them moving about. There will be plenty of them, there always is. God, life is hard for the oppressed, but to fight back is a victory. To remain unbroken in spirit is a great victory."

Bobby Sands "A True Hero" You really have excelled yourself #W66927. One murderer venerating another.........typical!

Sands was a murdering POS terrorist. His preferred MO was to plant a bomb in a shopping mall, to kill maim and traumatize innocent men, women and children, and be 50 miles away when it detonated.........Heroic eh?

His living situation was self-inflicted and the deaths of the hunger strikers are on the hands of their IRA handlers who insisted on them staying on the strike.

Perhaps you would care to emulate the late Mr. Sands. Looks like you could stand to lose a few excess pounds. 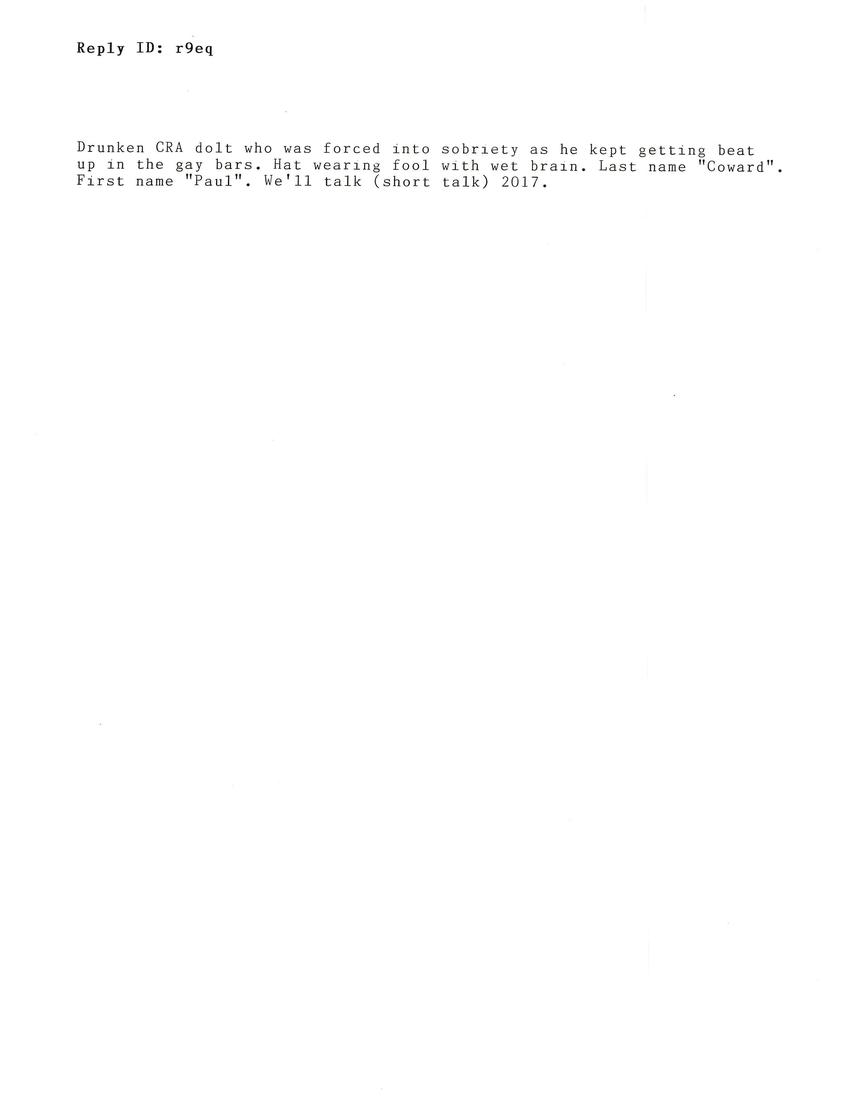 Short talk would be right.

No doubt your suite in C2 will still be available when you realize how irrelevant you become in the free world and join the 44%. 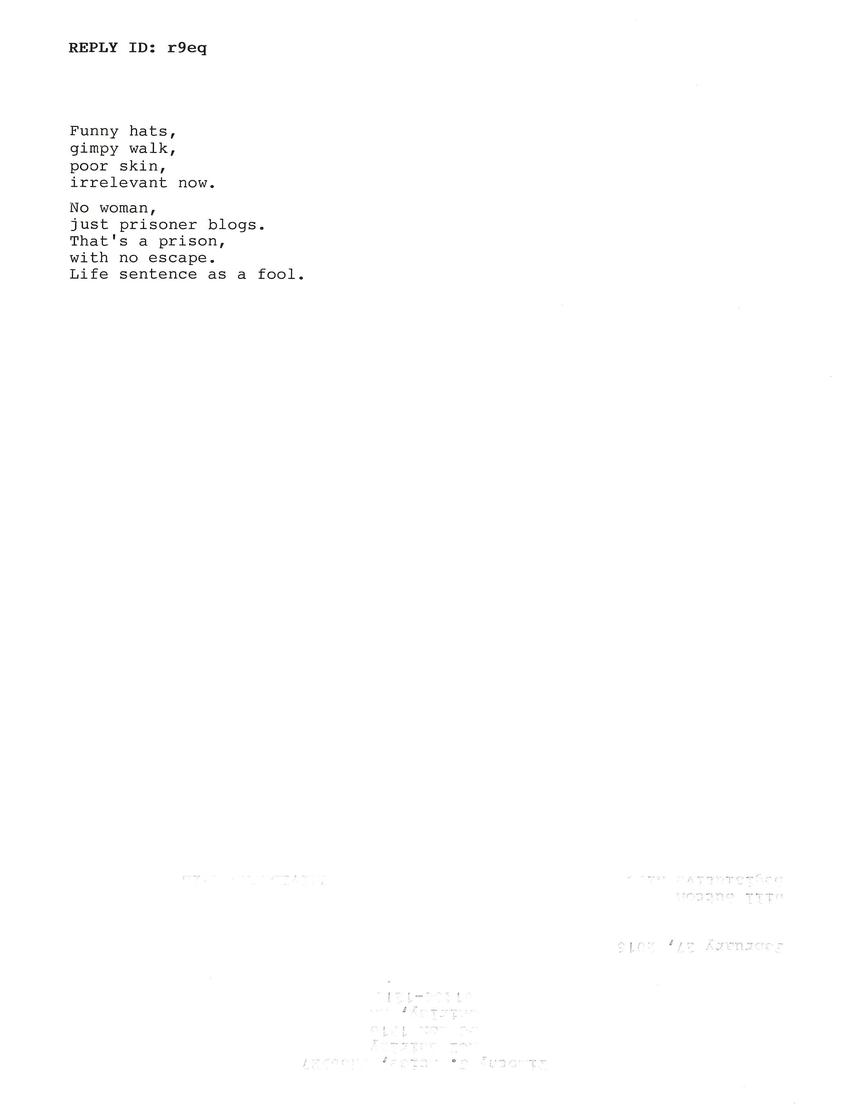 I know you like to describe your situation through what, in your imagination, you think is poetry but why so self critical Timmy? 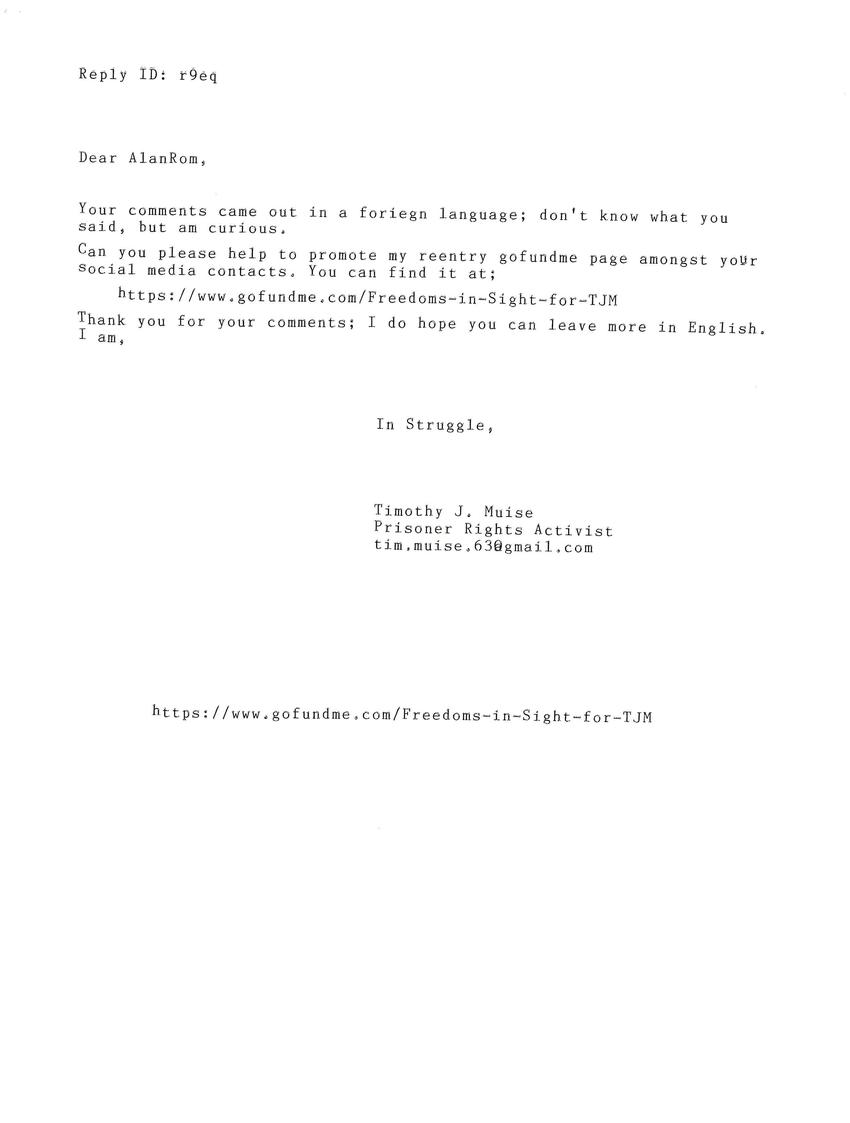 Seems your blog is the subject of a cyber attack. At least you are in good company. I'm sure Hillary is on the case. 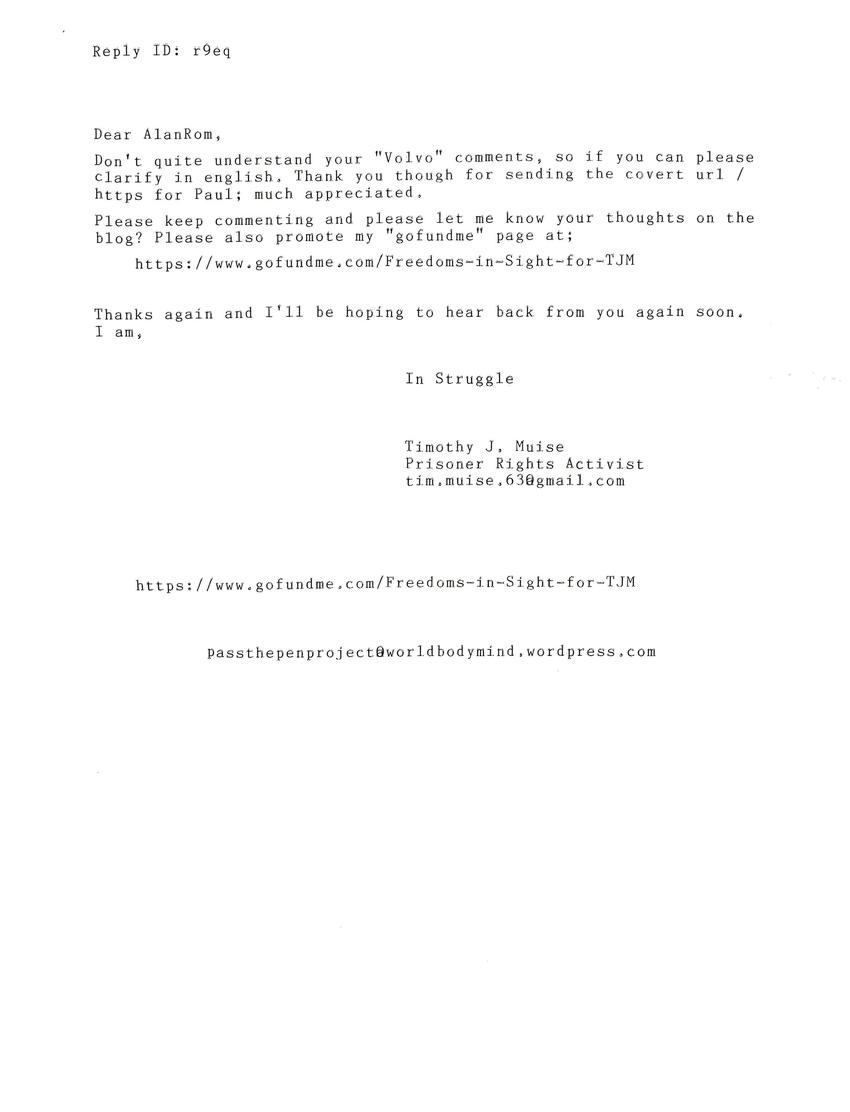