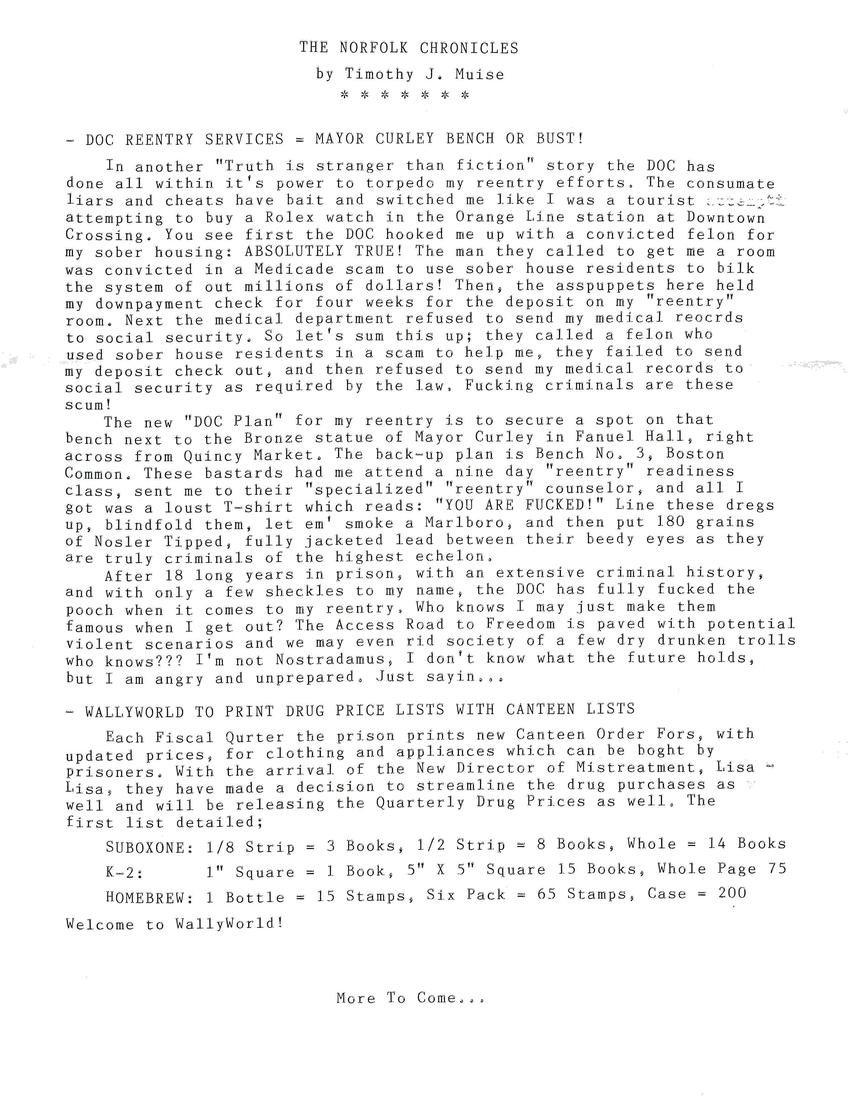 In another " Truth is stranger than fiction" story the DOC has done within it's power to torpedo my reentry efforts. The consummate lies and cheats have bait and switched me like I was a tourist attempting to buy Rolex watch in the Orange Line station at Downtown Crossing. You see first the DOC hooked me up with a convicted felon for my sober housing: ABSOULTELY TRUE! The man they called to get me a room was convicted in a Medicaid scam to use sober house residents to bilk the system of out millions of dollars! Then, the as puppets here held my down payment check for four weeks for the deposit on my "reentry" room. Next the medical department refused to send my medical records to social security. So let's sum this up; they called a felon who used sober house residents in a scam to help me. they failed to send my deposit check out, and then refused to send my medical records to social security as required by the law. Fucking criminals are these scum!

The new "DOC Plan" for my reentry is to secure a spot on that bench next to the Bronze statue of Mayor Curley in Fanuel Hall, right across from Quincy Market. The back-up plan is Bench No. 3, Boston Common. These bastards had me attend a nine day "reentry" readiness class, sent me to their "specialized" "reentry" counselor, And all I got was a loust T-shirt which reads: "YOU ARE FUCKED!" Line these dregs up, blindfold them, let em' smoke a Marlboro, and then put 180 grains of Nosler Tipped, fully jacked lead between their beedy eyes as they are truly criminals of the highest echelon.
After 18 long years in prison, with an extensive criminal history, and with only a few sheckles to my name, the DOC has fully fucked the pooch when it comes to my reentry. Who knows I may just make them famous when I get out? The Access Road to Freedom is paved with potential violent scenarios and we may even rid society of a few dry drunken trolls who knows??? I'm not Nostradamus, I don't know what the future holds, but I am angry and unprepared. Just sayin....

Each Fiscal Quarter the prison prints new Canteen Order Fors, with updated prices, for clothing and appliances which can be bought by prisoners. With the arrival of the New Director of Mistreatment, Lisa, they have made a decision to streamline the drug purchases as well and will be releasing the Quarterly Drug Prices as well. The first list is detailed;

Assuming that this guy has served his bid then he must be accorded the right to work in his chosen profession in the same way that you demand as your right. But then again he is only a white collar criminal and certainly way below a violent offender in the pecking order and worthy of your derision.

So let's sum this up....since the DOC is not the super efficient monolith that you expect it to be (as you have detailed to us ad nauseam for years) they are criminals that deserve to be executed for their inefficiency...... as opposed to all the first and second degree murderers for whom you have advocated freedom for all these years.

Joe Blow may struggle to get his head around that.