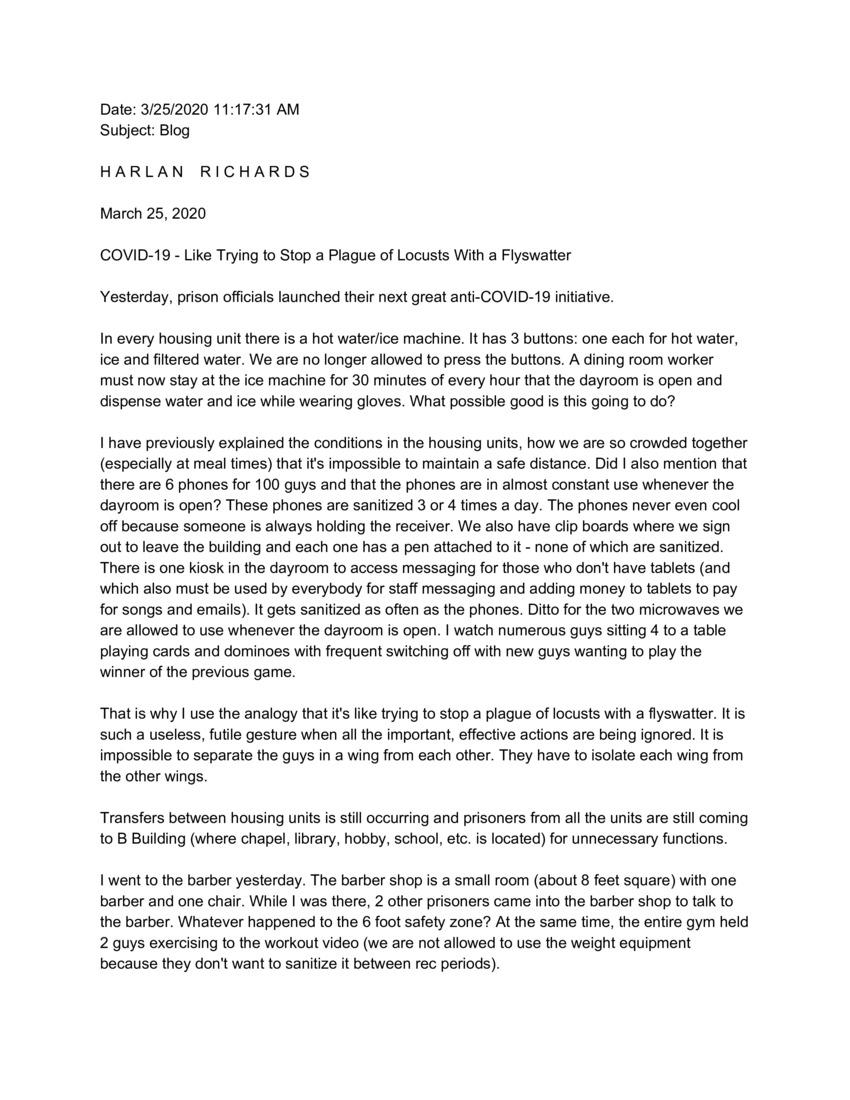 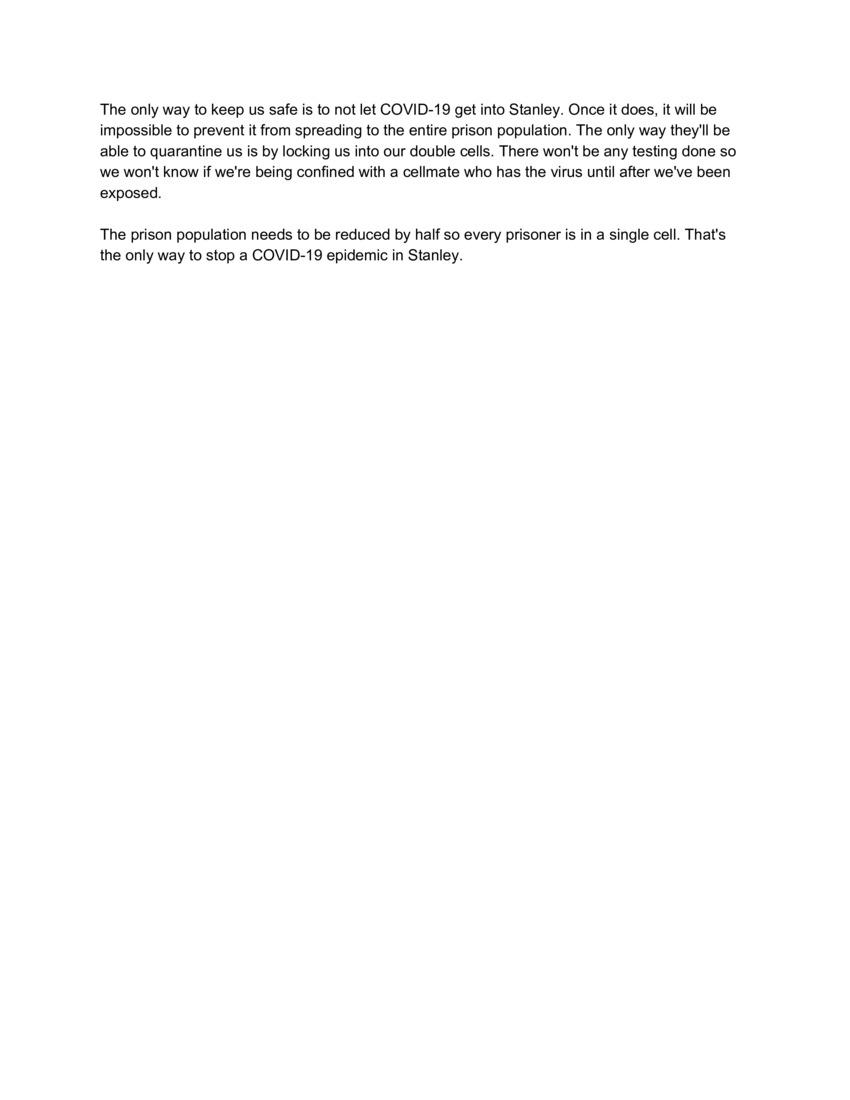 In every housing unit there is a hot water/ice machine. It has 3 buttons: one each for hot water, ice and filtered water. We are no longer allowed to press the buttons. A dining room worker must now stay at the ice machine for 30 minutes of every hour that the dayroom is open and dispense water and ice while wearing gloves. What possible good is this going to do?

I have previously explained the conditions in the housing units, how we are so crowded together (especially at meal times) that it's impossible to maintain a safe distance. Did I also mention that there are 6 phones for 100 guys and that the phones are in almost constant use whenever the dayroom is open? These phones are sanitized 3 or 4 times a day. The phones never even cool off because someone is always holding the received. We also have clip boards where we sign out to leave the building and each one has a pen attached to it - none of which are sanitized. There is one kiosk in the dayroom to access messaging for those who don't have tablets (and which also must be used by everybody for staff messaging and adding money to tablets to pay for songs and emails). It gets sanitized as often as the phones. Ditto for the two microwaves we are allowed to use whenever the dayroom is open. I watch numerous guys sitting 4 to a table playing cards and dominoes with frequent switching off with new guys wanting to play the winner of the previous game.

That is why I use the analogy that it's like trying to stop a plague of locusts with a flyswatter. It is such a useless, futile gesture when all the important, effective actions are being ignored. It is impossible to separate the guys in a wing from each other. They have to isolate each wing from the other wings.

Transfers between housing units is still occurring and prisoners from all the units are still coming to B Building (where chapel, library, hobby, school, etc. is located) for unnecessary functions.

I went to the barber yesterday. The barber shop is a small room (about 8 feet square) with one barber and one chair. While I was there, 2 other prisoners came into the barber shop to talk to the barber. Whatever happened to the 6 foot safety zone? At the same time, the entire gym held 2 guys exercising to the workout video (we are not allowed to use the weight equipment because they don't want to sanitize it between rec periods).

The only way to keep us safe is to not let COVID-19 get into Stanley. Once it does, it will be impossible to prevent it from spreading to the entire prison population. The only way they'll be able to quarantine us is by locking us into our double cells. There won't be any testing done so we won't know if we're being confined with a cellmate who has the virus until after we've been exposed.

The prison population needs to be reduced by half so every prisoner is in a single cell. That's the only way to stop a COVID-19 epidemic in Stanley.

Thank you for continuing to write blogs about COVID 19 potential at Stanley. John verifies what you're saying--and especially the lack of staff initiatives to sanitize and lessen the chances of spread. I'm forwarding your blogs to legislators and using your observations in my nearly daily emails to Secretary Carr and other DOC officials. I appealed to Wisconsin Eye to interview Secretary Carr and that happened yesterday. What he said has been done on the DOC level and what's being implemented are two different things and I shared that with them today. 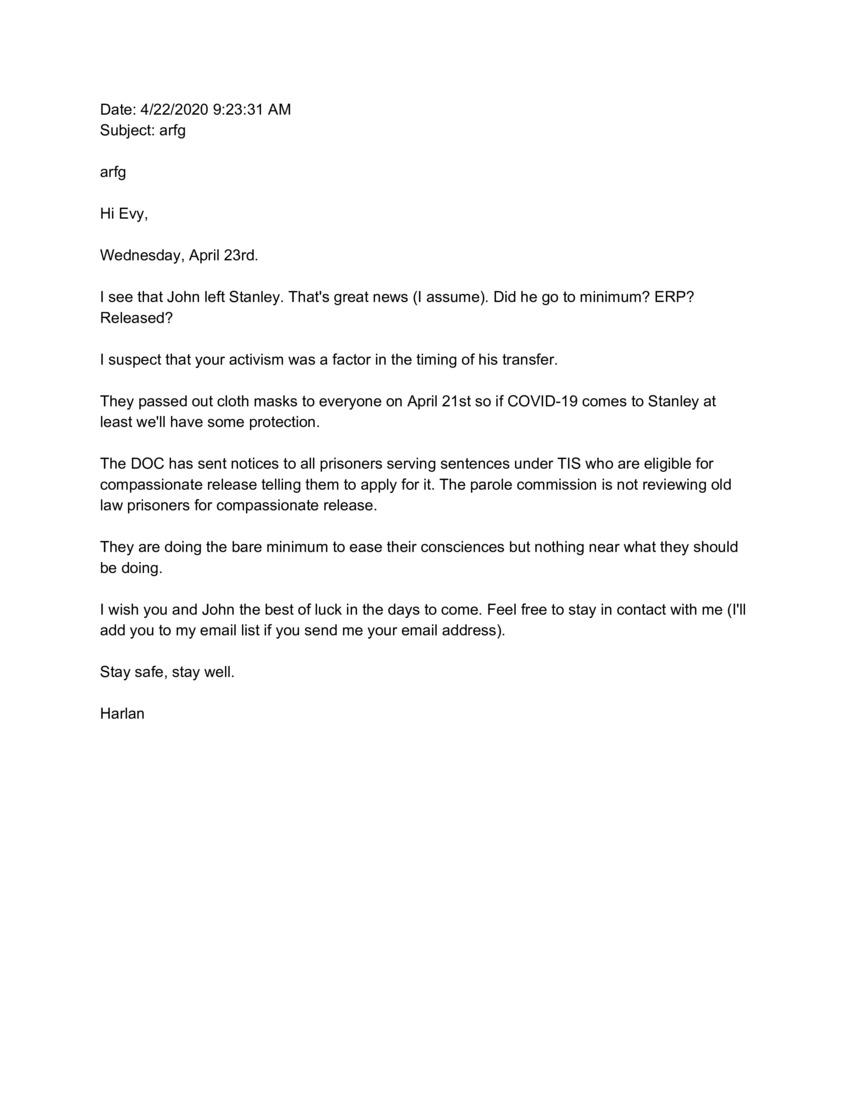