The Wretched: Know Your Enemies, From Your Friends 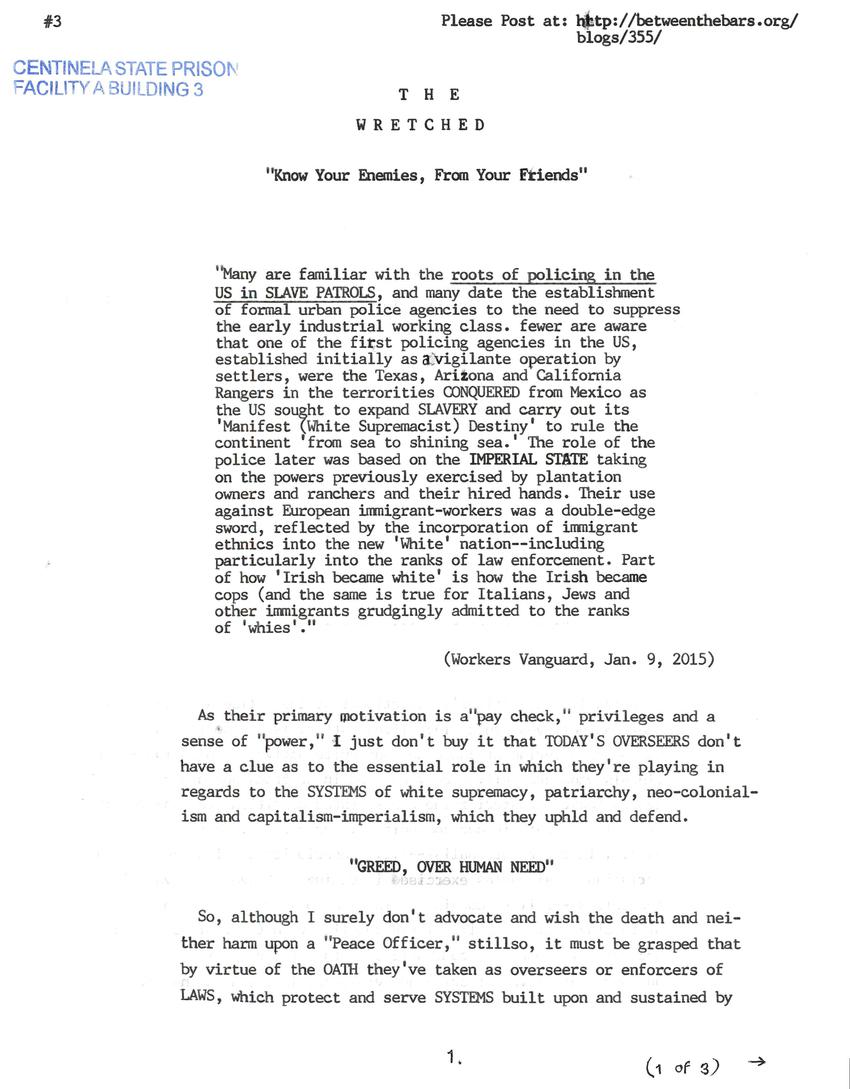 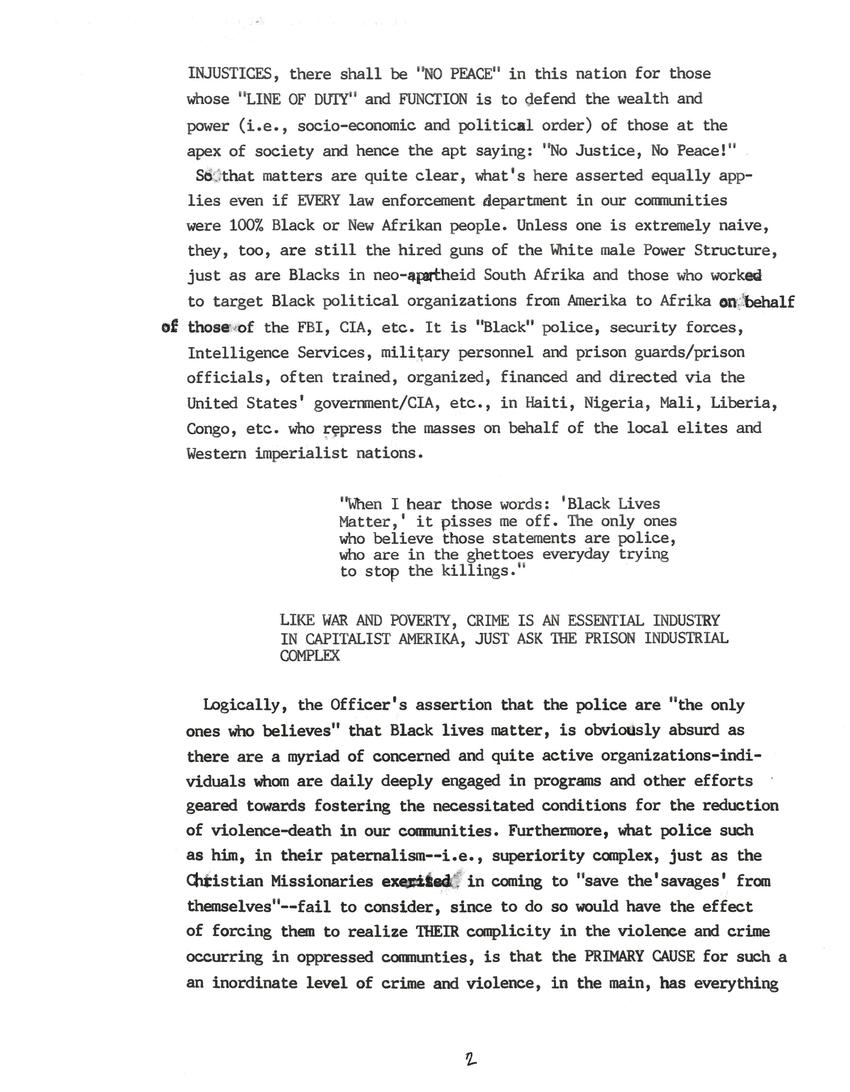 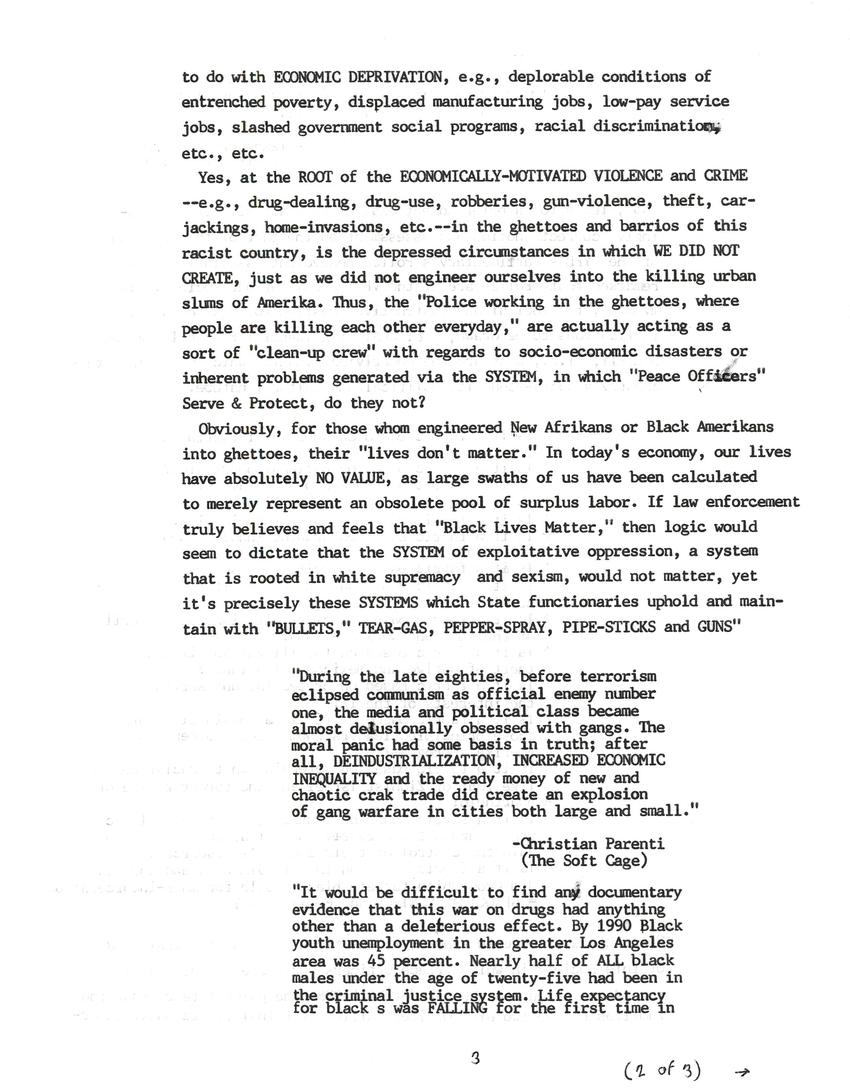 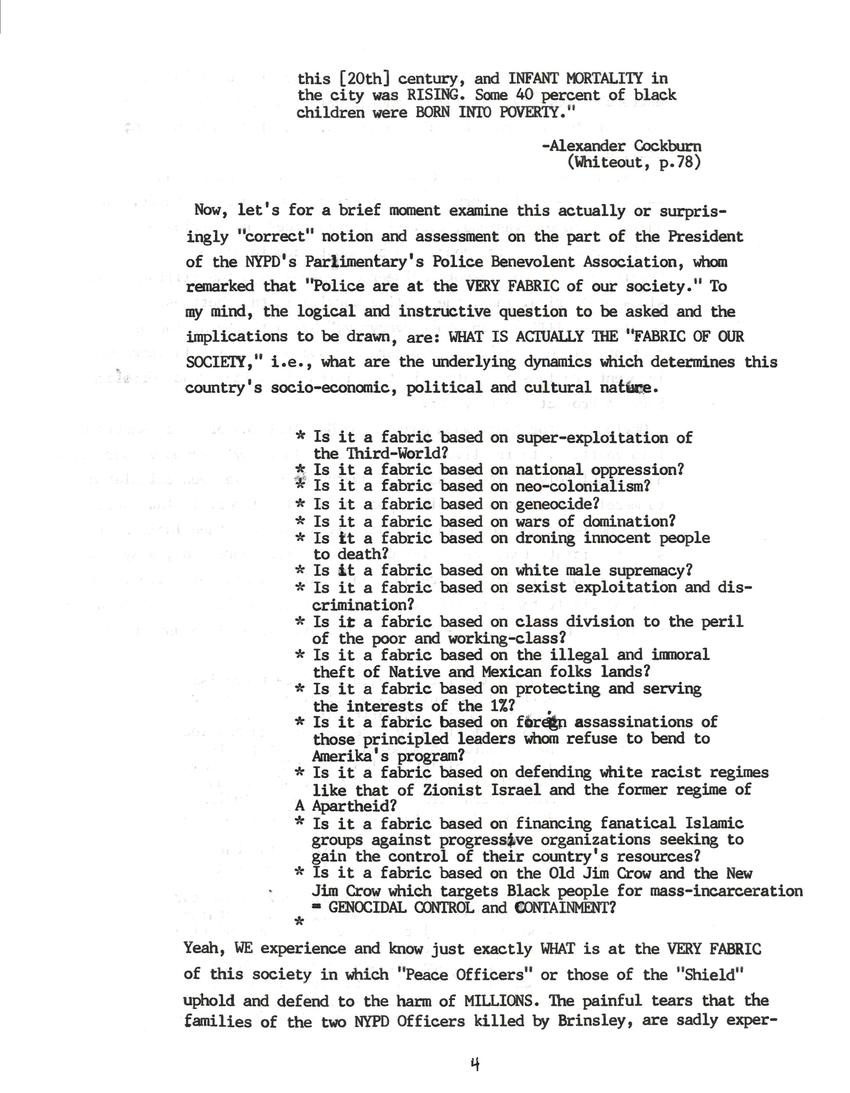 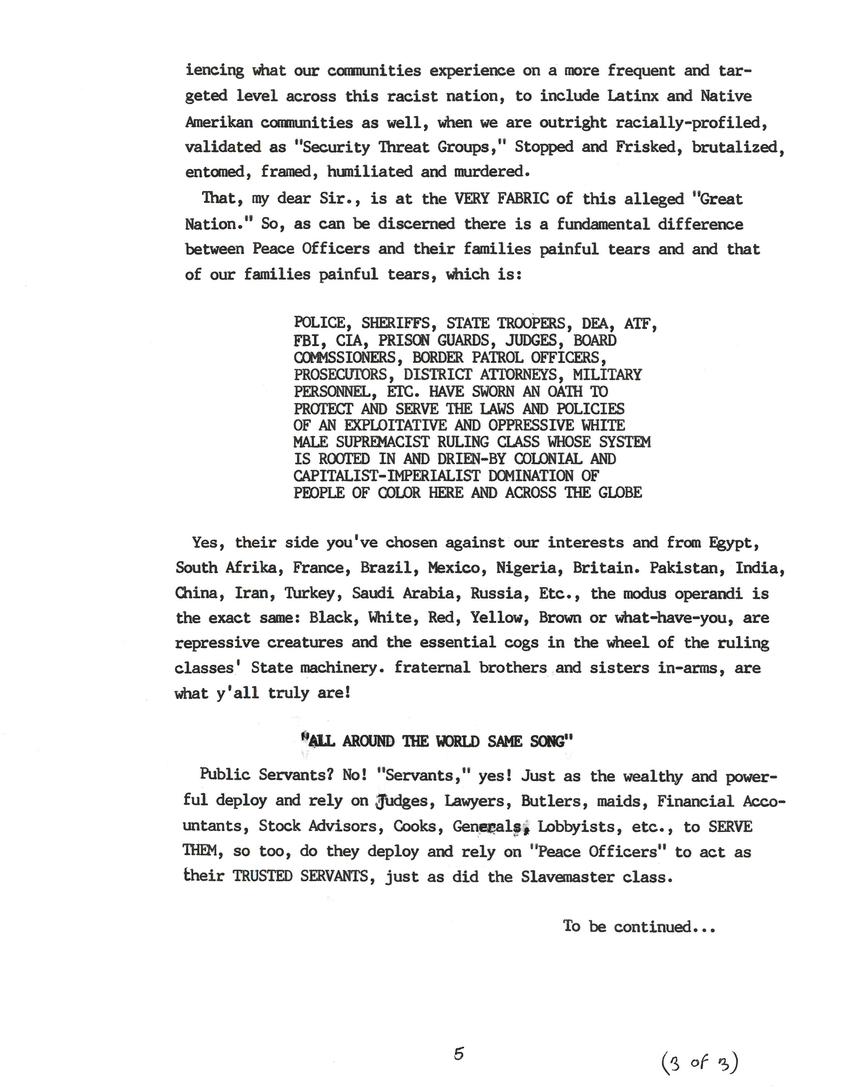 "Know Your Enemies, From Your Friends"

"Many are familiar with the roots of policing in the US in SLAVE PATROLS, and many date the establishment of formal urban police agencies to the need to suppress the early industrial working class. fewer are aware that one of the first policing agencies in the US, established initially as a vigilante operation by settlers, were the Texas, Arizona and California Rangers in the terrorities CONQUERED from Mexico as the US sought to expand SLAVERY and carry out its 'Manifest (White Supremacist) Destiny' to rule the continent 'from sea to shining sea.' The role of the police later was based on the IMPERIAL STATE taking on the powers previously exercised by plantation owners and ranchers and their hired hands. Their use against European immigrant-workers was a double-edge sword, reflected by the incorporation of immigrant ethnics into the new 'White' nation--including particularly into the ranks of law enforcement. Part of how 'Irish became white' is how the Irish became cops (and the same is true for Italians, Jews and other immigrants grudgingly admitted to the ranks of 'whites'."

As their primary motivation is a "pay check," privileges and a sense of "power," I just don't buy it that TODAY'S OVERSEERS don't have a clue as to the essential role in which they're playing in regards to the SYSTEMS of white supremacy, patriarchy, neo-colonialism and capitalism-imperialism, which they uphld and defend.

So, although I surely don't advocate and wish the death and neither harm upon a "Peace Officer," stillso, it must be grasped that by virtue of the OATH they've taken as overseers or enforcers of LAWS, which protect and serve SYSTEMS built upon and sustained by INJUSTICES, there shall be "NO PEACE" in this nation for those whose "LINE OF DUTY" and FUNCTION is to defend the wealth and power (i.e., socio-economic and political order) of those at the apex of society and hence the apt saying: "No Justice, No Peace!"
So that matters are quite clear, what's here asserted equally applies even if EVERY law enforcement department in our communities were 100% Black or New Afrikan people. Unless one is extreely naive, they, too, are still the hired guns of the White male Power Structure, just as are Blacks in neo-apartheid South Afrika and those who worked to target Black political organizations from Amerika to Afrika on behalf of those of the FBI, CIA, etc. It is "Black" police, security forces, Intelligence Services, military personnel and prison guards/prison officials, often trained, organized, financed and directed via the United States' government/CIA, etc., in Haiti, Nigeria, Mali, Liberia, Congo, etc. who repress the masses on behalf of the local elites and Western imperialist nations.

"When I hear those words: 'Black Lives Matter,' it pisses me off. The only ones who believe those statements are police, who are in the ghettoes everyday trying to stop the killings."

LIKE WARE AND POVERTY, CRIME IS AN ESSENTIAL INDUSTRY IN CAPITALIST AMERIKA, JUST ASK THE PRISON INDUSTRIAL COMPLEX

Logically, the Officer's assertion that the police are "the only ones who believes" that Black lives matter, is obviously absurd as there are a myriad of concerned and quite active organizations-individuals whom are daily deeply engaged in the programs and other efforts geared towards fostering the necessitated conditions for the reduction of violence-death in our communities. Furthermore, what police such as him, in their paternalism--i.e., superiority complex, just as the Christian Missionaries exerised in coming to "save the 'savages' from themselves"-- fail to consider, since to do so would have the effect of forcing them to realize THEIR complicity in the violence and crime occurring in oppressed communties, is that the PRIMARY CAUSE for such a an inordinate level of crime and violence, in the main, has everything to do with ECONOMIC DEPRIVATION, e.g., deplorable conditions of entrenched poverty, displaced manufacturing jobs, low-pay service jobs, slashed government social programs, racial discrimination, etc., etc.
Yes, at the ROOT of the ECONOMICALLY-MOTIVATED VIOLENCE and CRIME--e.g., drug-dealing, drug-use, robberies, gun-violence, theft, car-jackings, home-invasions, etc.-- in the ghettoes and barrios of this racist country, is the depressed circumstances in which WE DID NOT CREATE, just as we did not engineer ourselves into the killing urban slums of Amerika. Thus, the "Police working in the ghettoes, where people are killing each other everyday," are actually acting as a sort of "clean-up crew" with regards to socio-economic disasters or inherent problems generated via the SYSTEM, in which "Peace Officers" Serve & Protect, do they not?
Obviously, for those whom engineered New Afrikans or Black Amerikans into ghettos, their "lives don't matter." In today's economy, our lives have absolutely NO VALUE, as large swaths of us have been calculated to merely represent an obsolete pool of surplus labor. If law enforcement truly believes and feels that "Black Lives Matter," then logic would seem to dictate that the SYSTEM of exploitative oppression, a system that is rooted in white supremacy and sexism, would not matter, yet it's precisely these SYSTEMS which State functionaries uphold and maintain with "BULLETS," TEAR-GAS, PEPPER SPRAY, PIPE-STICKS and GUNS"

"During the late eighties, before terrorism eclipsed communism as official enemy number one, the media and political class became almost delusionally obsessed with gangs. The moral panic had some basis in truth; after all DEINSTRUTRIALIZATION, INCREASED ECONOMIC INEQUALITY and the ready money of new and chaotic crak trade did create an explosion of gang warfare in cities both large and small."

"It would be difficult to find any documentary evidence that this war on drugs had anything other than a deleterious effect. By 1990 Black youth unemployment in the greater Los Angeles area was 45 percent. Nearly half of ALL black males under the age of twenty-five had been in the criminal justice system. Life expectancy for blacks was FALLING for the first time in this [20th] century, and INFANT MORTALITY in the city was RISING. Some 40 percent of black children were BORN INTO POVERTY."

Now, let's for a brief moment examine this actually or surprisingly "correct" notion and assessment on the part of the President of the NYPD's Parlimentary's Police Benevolent Association, whom remarked that "Police are at the VERY FABRIC of our society." To my mind, the logical and instructive question to be asked and the implications to be drawn, are: WHAT IS ACTUALLY THE "FABRIC OF OUR SOCIETY," i.e., what are the underlying dynamics which determines this country's socio-economic, political and cultural nature.

Yeah, WE experience and know just what exactly WHAT is at the VERY FABRIC of this society in which "Peace Officers" or those of the "Shield" uphold and defend to the harm of MILLIONS. The painful tears that the families of the two NYPD Officers killed by Brinsley, are sadly experiencing what our commnunties experience on a more frequent and targeted level across this racist nation, to include Latinx and Native Amerikan communities as well, when we are outright racially-profiled, validated as "Security Threat Groups," Stopped and Frisked, brutalized, entomed, framed, humiliated and murdered.