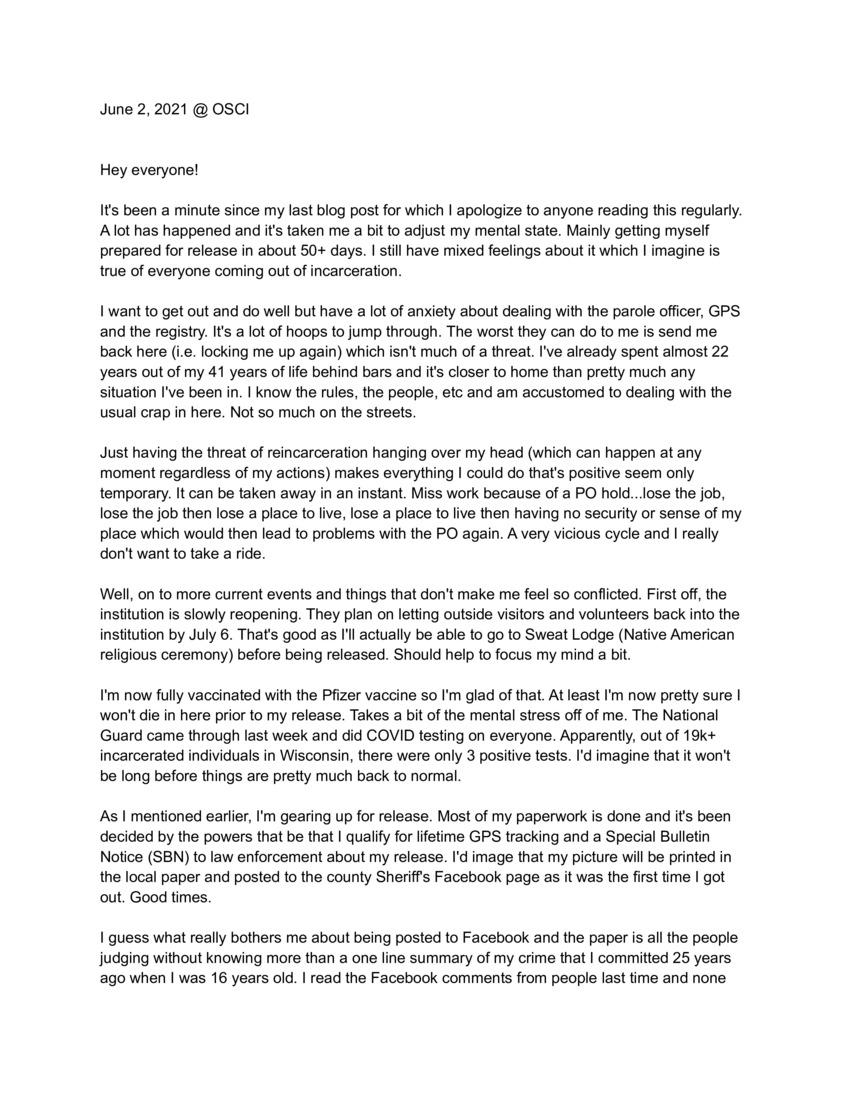 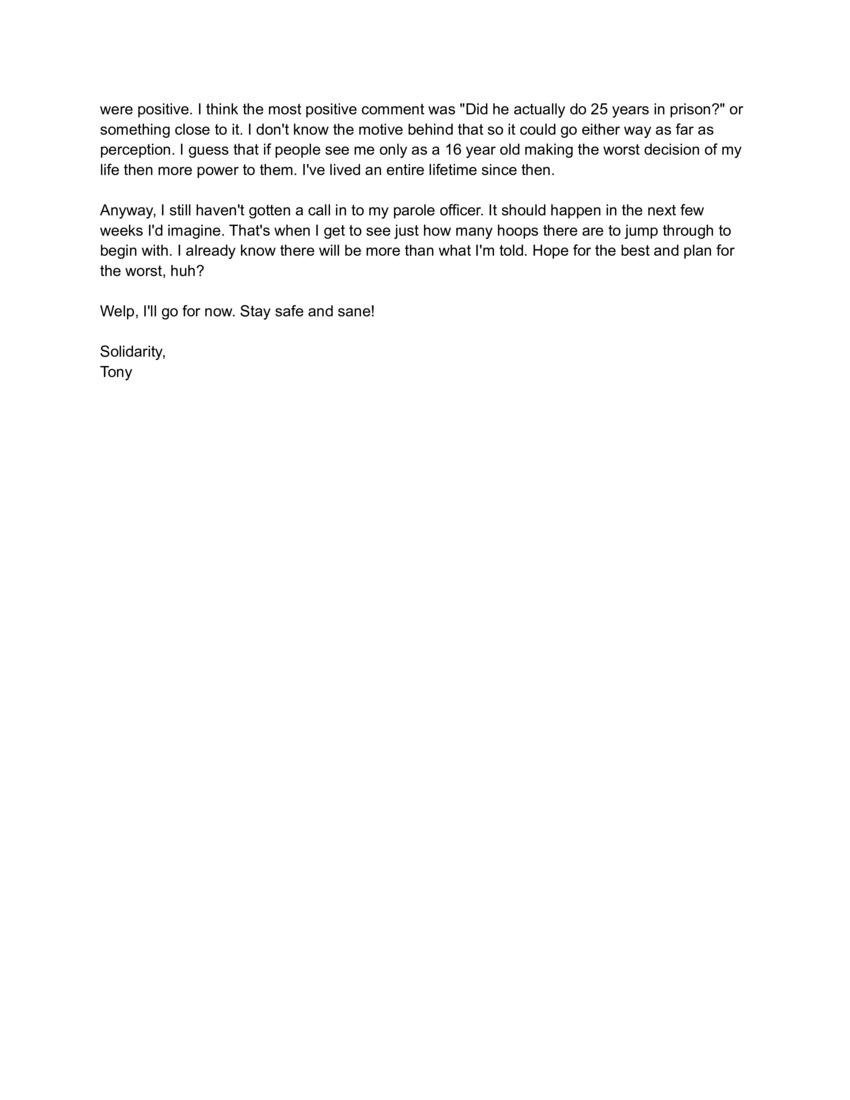 It's been a minute since my last blog post for which I apologize to anyone reading this regularly. A lot has happened and it's taken me a bit to adjust my mental state. Mainly getting myself prepared for release in about 50+ days. I still have mixed feelings about which I imagine is true of everyone coming out of incarceration.

I want to get out and do well but have a lot of anxiety about dealing with the parole officer, GPS and the registry. It's a lot of hoops to jump through. The worst they can do to me is send back here (i.e. locking me up again) which isn't much of a threat. I've already spent almost 22 years out of my 41 years of life behind bars and it's closer to home than pretty much any situation I've been in. I know the rules, the people, etc and am accustomed to dealing with the usual crap in here. Not so much on the streets.

Just having the threat of reincarceration hanging over my head (which can happen at any moment regardless of my actions) makes everything I could do that's positive seem only temporary. It can be taken away in an instant. Miss work because of a PO hold...lose the job, lose the job then lose a place to live, lose a place to live then having no security or sense of my place which would then lead to problems with the PO again. A very vicious cycle and I really don't want to take a ride.

Well, on to more current events and things that don't make me feel so conflicted. First off, the institution is slowly reopening. They plan on letting outside visitors and volunteers back into the institution by July 6. That's good as I'll actually be able to go to Sweat Lodge (Native American religious ceremony) before being released. Should help to focus my mind a bit.

I'm now fully vaccinated with the Pfizer vaccine so I'm glad of that. At least I'm now pretty sure I won't die in here prior to my release. Takes a bit of the mental stress off of me. The National Guard came through last week and did COVID testing on everyone. Apparently, out of 19k+ incarcerated individuals in Wisconsin, there were only 3 positive tests. I'd imagined that it won't be long before things are pretty much back to normal.

As I mentioned earlier, I'm gearing up for release. Most of my paperwork is done and it's been decided by the powers that be that I qualify for lifetime GPS tracking and a Special Bulletin Notice (SBN) to law enforcement about my release. I'd imagine that my picture will be printed in the local paper and posted in the county Sheriff's Facebook page as it was the first time I got out. Good times.

I guess what really bothers me about being posted to Facebook and the paper is all the people judging without knowing more than a one line summary of my crime that I committed 25 years ago when I was 16 years old. I read the Facebook comments from people last time and none were positive. I think the most positive comment was "did he actually do 25 years in prison?" or something close to it. I don't know the motive behind that so it could go either way as far as perception. I guess that if people see me only as a 16 year old making the worst decision of my life then more power to them. I've lived an entire lifetime since then.

Anyway, I still haven't gotten a call in to my parole officer. It should happen in the next few weeks I'd imagine. That's when I get to see just how many hoops there are to jump through to begin with. I already know there will be more than what I'm told. Hope for the best and plan for the worst, huh?

22 years and your super close now then ever to be released. That has to feel pretty awesome? Sure it's probably scary as heck. Lots of things going on in the head. I'm sure 22 years the head is where you lived. And no freedom along with it your up against a wall. Brightside is coming because all that negative thinking I guess more worried. Will in to all work out to a Bright future. Think about freedom using the bathroom instead of losing a job. A job you haven't started yet. Think about things like food and clothing and what you might do first. Walk in a park. Not at anytime you could go back behind the walls of hell. Think outside the box and I believe with more happier outlook on what will you eat first or sleep in a bed.with a pillow. Hold hands and look at someone special. Not worried about p.o officer. Haven't seen him yet. Don't stress about things that you cannot control 💯. I wish you the best and I believe you will never go back to prison. I believe you had 22 years to realize this too. You will be great stand strong for yourself and don't worry about others. You got this. I don't know you. You don't know me. I read your blog and before I knew I'm typing away. Julie mccurdy you got this no worries man.
(scanned reply – view as blog post)
uploaded July 12, 2021.  Original (PDF) 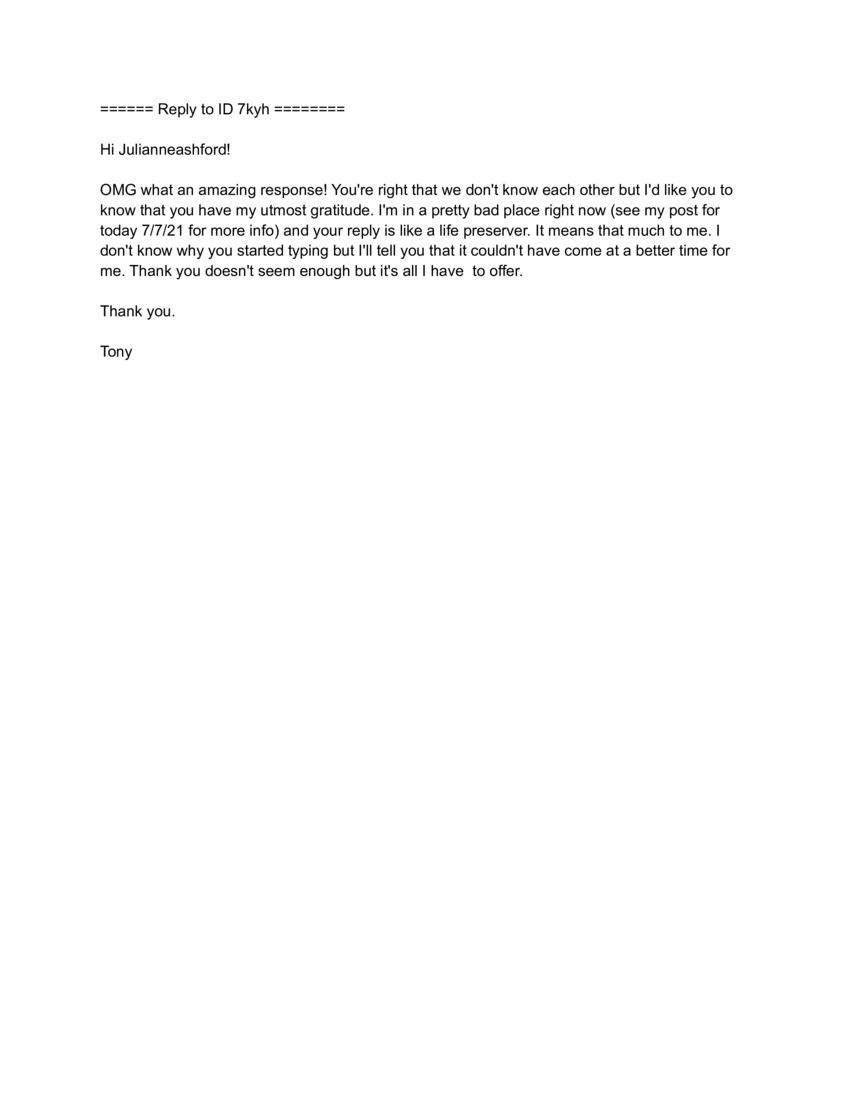 Tony best of luck to you in the journey you are about you to explore. Sure there is so much to indore with millions of questions and gonna be hard to get all of them answered. Just relax and remind yourself can it get anymore worse than the hell you fought yourself through? You must deserve this change why eles would you have made it to see this date thats set for release? Don't doubt yourself and there are lot's of help out here. You got it just stand proud and take it one day at a time. Hell it's going to worth just walking out the door. Freedom is huge man . You have that other chance. Be the best you can. Your a Trouper to make it Freedom. You be ok you will make it what ever you make of it. It's all up to you.