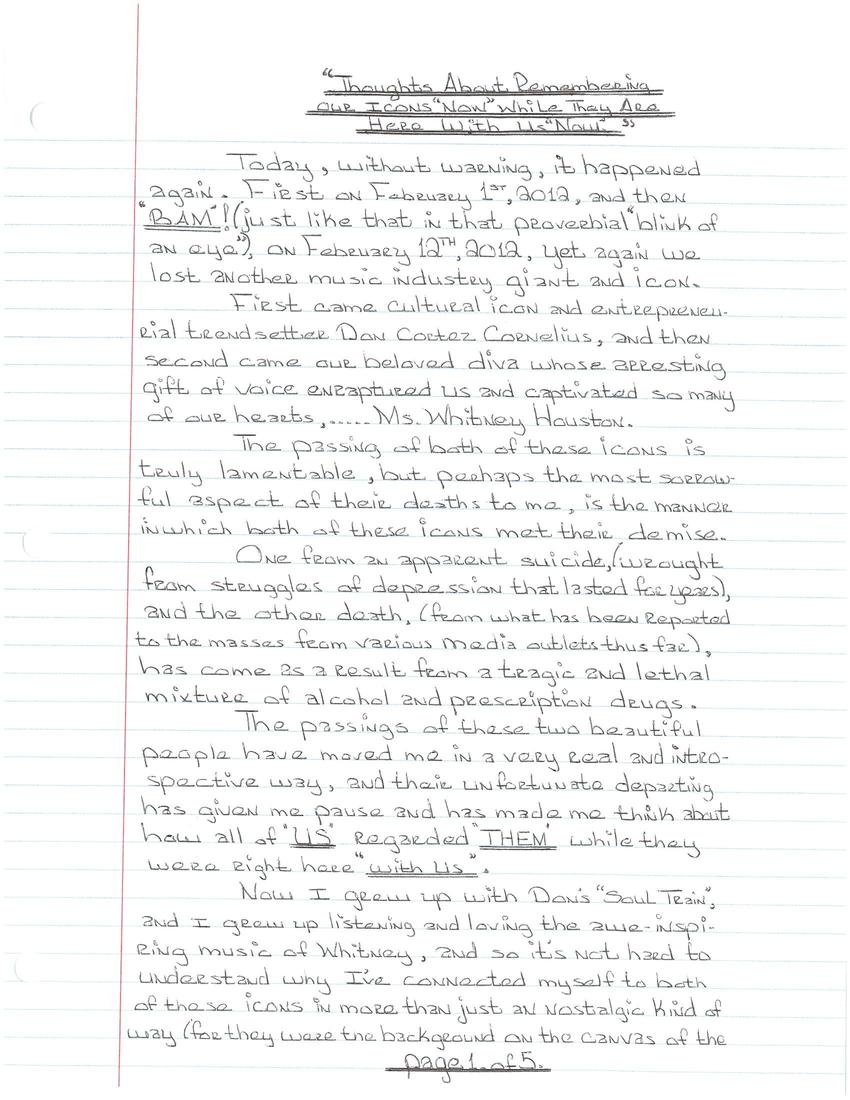 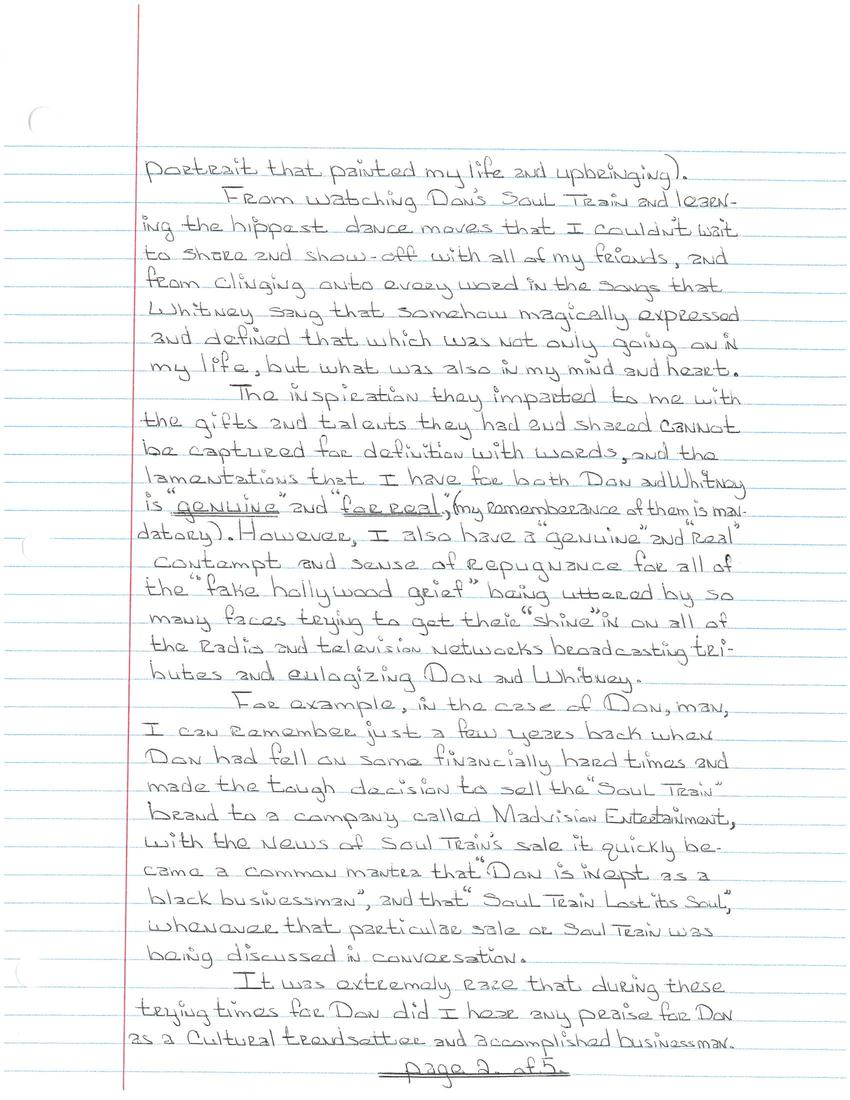 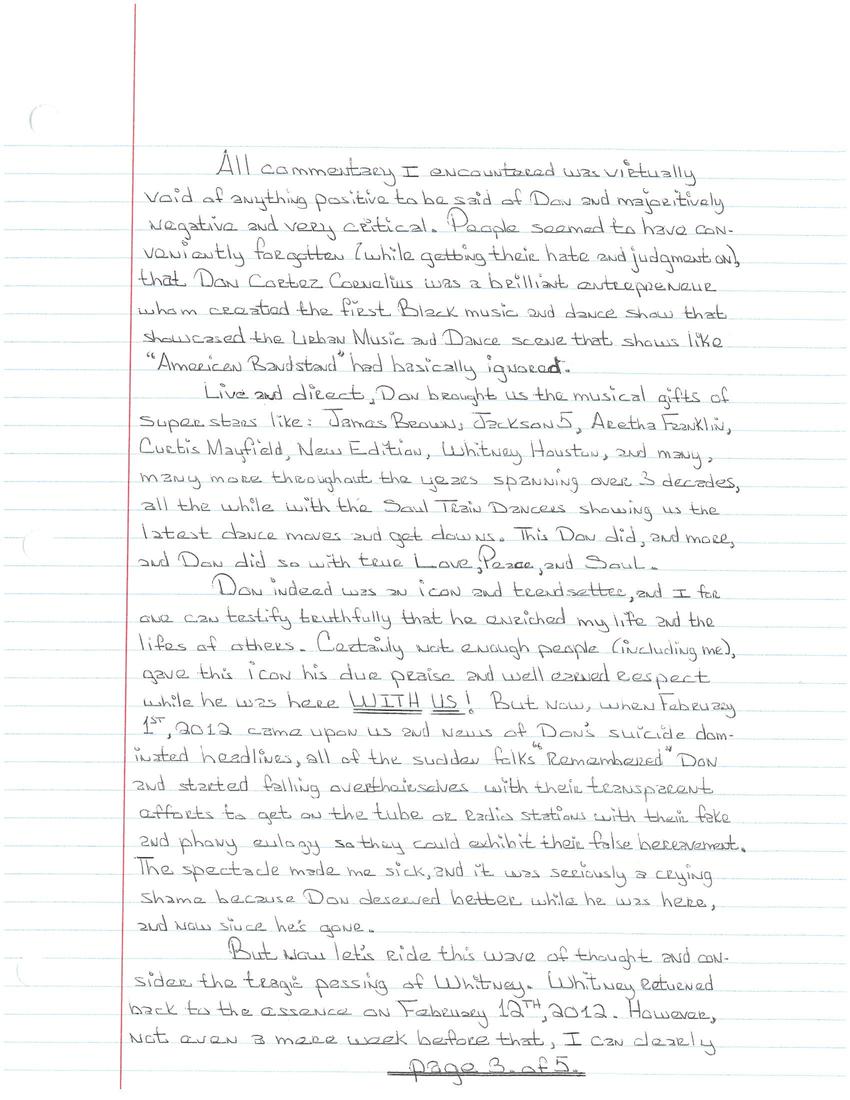 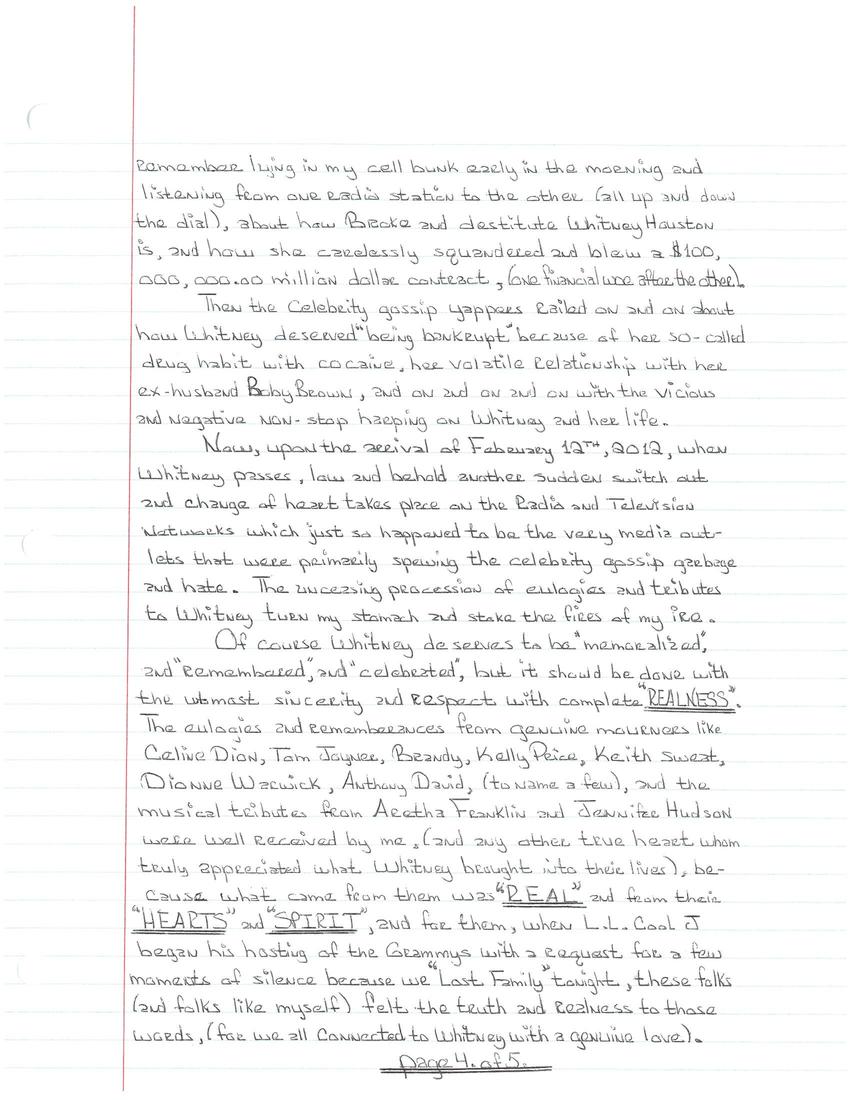 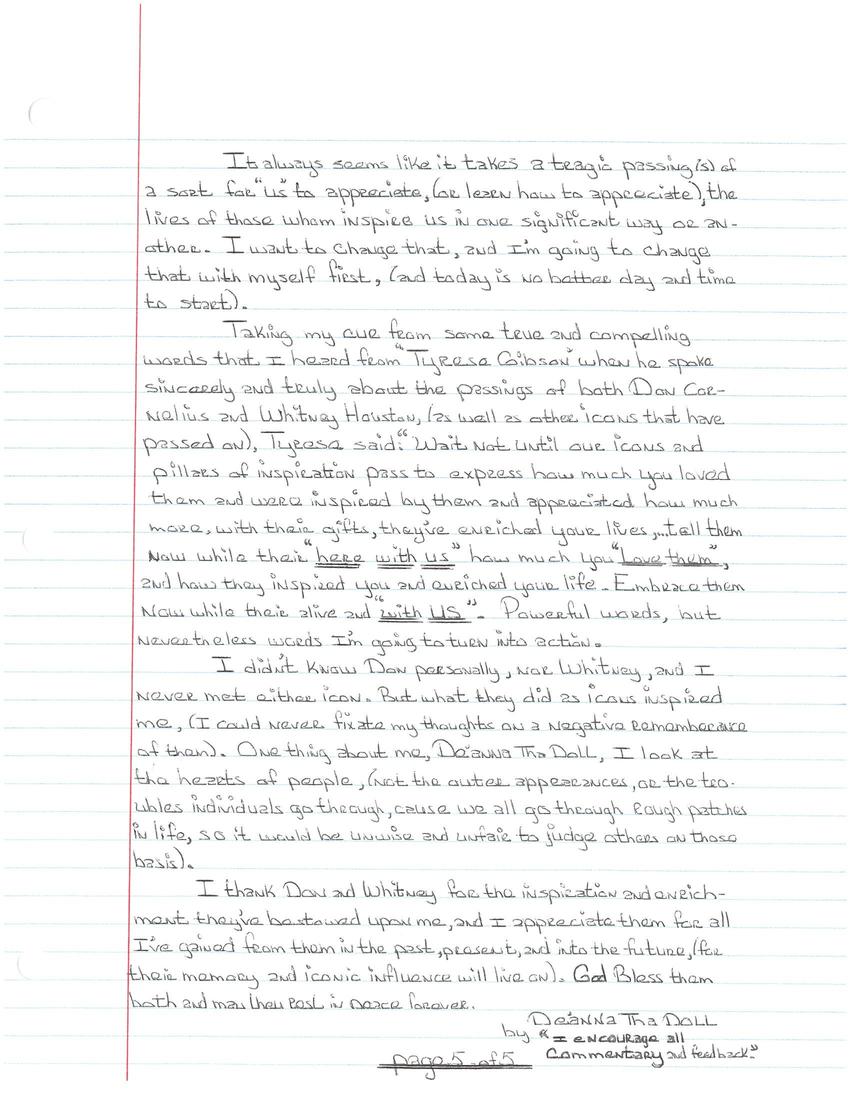 Today without warning, it happened again. First on February 1st, 2012, and then "BAM"! (just like that in that proverbial blink of an eye"), on February 12th, 2012, yet again we lost another music industry giant and icon.

first caecultural icon and entrepreneurial trendsetter Don Cortez Cornelius, and then second cameour beloved diva whose arresting gift of voice enraptured us and captivated so many of our hearts, .... Ms Whitney Houston.

One from an apparent suicide, (wrought) from struggles of depression that lasted for years, and the other death, (from what has been reported to the masses from various media outlets thus far), has come as a result from a tragic and lethal mixture of alcohol and prescription drugs.

The passings of these two beautiful people have moved me in a very real and introspective way, and their unfortunate departing has given me pause ad has made me think about how all of "US" regarded "THEM" whil they were right here "with us".

Now I grew up with Don's "Soul Train", and I grew up listening and loving the awr-inspiring music of Whitney, and so it's not, hard to understand why I've connected myself to both of the icons in more than just an nostalgic kind of way (for they were the background on the canvas of the portrait that painted my life and upbringing).

From watching Don's soul train and learning the hippest dance moves that I could't wait to share and show- off with all of my friends, ad from clinging onto every word in the songs that Whitney sang that somehow magically expressed and defined thatwhich was not only going on in my life, but whatwas also in my mind and heart.

The inspiration they impartedto me with the gifts and talents they had and shared cannot be captured for definition with words, and the lamentations that I have for both Don and Whitney is "genuine" and "ferreal", (my remeberance of them is mandatory. however, I also have a "genuine" and "real" contempt and shne of repugnance for all of the "fake hollywood grief" being uttered by so many faces trying to get their "shine" in on all of the Radio and elevision Networks broadcasting tributes and eulogizing Don and Whitney.

For example, in the case of Don, man, I can remember just a few years back when Don had fell on ome finncially hard times and made the tough decision to sell the "soul train" brand to a company called Madvision Entertainment, with the news of soul trains sale it quickly be came a common mantra that" Don is inept as a black businessman", and that "soul train lost its soul", whenever that particular sale or soul train was being discussed in conversation.

It was extremely raze that duing these trying times for Don did I hear any praise for Don as a cultural trainseter and accomplished businessman.

All commentary I encountered was virtually void of anything psitive to be said of Don and majoritively negative and very critical. People seemed to have conveniently forgotton (while getting their hate and judgment on), that Don Cortez Cornelius was a brilliant entrepreneur whom created the first Black music and dance show that showcased the urban music and dance scene that shows like "American Bandstand" had basically ignored.

Live and direct, Don brought us the musical gifts o superstars like: Jams Brown, Jackson 5, Aretha Franklin, Curtis Mayfield, New Edition, Whitney Houston, and many, many more throughout the years spanning over 3 decades, all the while with the Soul Train Dancers showin us the latest dance moves and get downs. tThis don did, and more, and don did so with true Love, Peace and Soul.

Don indeed was an icon and trendsetter, and I for one can testify truthfully tha the enriched my life and the lifes of others. Certainly not enough people, (including me, gave this icon his due praise and well earned respect while he was here WITH US! But now, when February 1st, 202 came upon us and news of don's suicide dominated headlines, all of the suicide folks "remembered" Don and started falling over their selves with their transparent efforts to get on the tube or radio stations with their fake an dphony eulogy so they could exhibit their false bereavement.

The spectacle made me sick, and i was seriously a crying shame becaue Don deserved better, while he was here, and now since he's gone.

But now let's ride this wave of thought and consider the tragic passing of Whitney. Whitney returned bsck to the essence on Febraru 12th 2012. However, not even a merr week before that, I can clearly remember lying in my cell bunk early in the morning and listening from one radio station to the other. (all up and down the dial), about how broke and destitute Whitney Houston is, and how she carelessly squandered and blew a 100,000,000.oo million dollar contract, (one financial war after another).

Then the celebrity gossip yappers railed on and on about how Whitney deserved being bankrupt because of her so-called drug habit with cocaine, her volatile relationship with her ex-husnad Bab Brown, and on and on and on with the vicious and negative non=stop keeping on Whitney and her life.

Now, upon the arrival of February 12th, 2012, when Whitney passes, law and behold another sudden switch out and change of heart takes place on the radio and television networks whcih just so happened to be the very media outlets that were primarily spewing the celebrity gossip garbage and hate. The uncessing procession of eulogies and tributes to Whitmey turn my stomach and stake the dires of me ire.

Of course Whitney deserves to be "memoralized", and "rembered", and "celebrated", but it should be done with the utmost sincerity and respect with complete "REALNESS". The eulogies and rememberances from genuine mourners like Celine Dion, tom Jones, Brandy, Kelly Price, Keith Sweat, Dionne Warwick, Anthony David, (to name a few), and the musical tributes from Aretha Franklin and Jennifer Hudson were well received by me. (and any other true heart, whom truly appreciated what Whitney brought into their lives), because what came from them was "REAL" and from their "HEARTS" and "SPIRIT", and for them, when L.L. Cool J began his hosting of hte Grammys with a request for a few moments of silence becaue we "Lost Family" tonight, these folks (and folks like myself) felt the truth and realness to those words, (for we all conncected to Whitney with a genuine love).

It always seems like it takes a tragic passing is)of a sort, for "us to appreciate, (or learn how to appreciate), the lives of those whom inspire us in one significant way or another, I want to change that, and I'm going to change that with myself first, (and today is no better day and time to start).

Taking my cue from some true and compelling words that I heard from "Tyrese Gibson" when he spoke sincerely and truly about the passings of both Don Cornelius and Whitney Houston, (as well as other icons that have passed on), Tyrese said, "Wait not until our icons and pillars of inspiratiom pass to express how much you loved them and were inspired by them and apprcaited how much more, wiht their, gifts, they've enriched your lives,... tell them now while their "here with us" how much you "love them", and how they inspired you and enriched your life. Embrace them now while their alive and "withus". Powerful words, but nevertheless words I'm going to turn into action.

I didn't know Don personally, nor Whitney, and I never met either icon. but what they did as icons inspired me, (I could never fixate my thoughts on a negative rememberance of thrm). One thing about me, Deanna The Doll, I look at the hearts of people, (not the outer appearances, or the troubles individuals go though, cause we all go through rough patches in life, so it would be unwise and unfair to judge others on those basis).

I thank Don and Whitney for the inspiration and enrichment they've bestowed upon me, and I apprecaite them for all I've gained from them in the past, present and into the future, (for their memory and iconic influence will live on). God Bless them both and may they rest in peace forever.

Deanne The Doll
by "I encourage all commentary and feedback"

Thanks for writing! I worked on the transcription for your post.
Thanks for your thoughts!