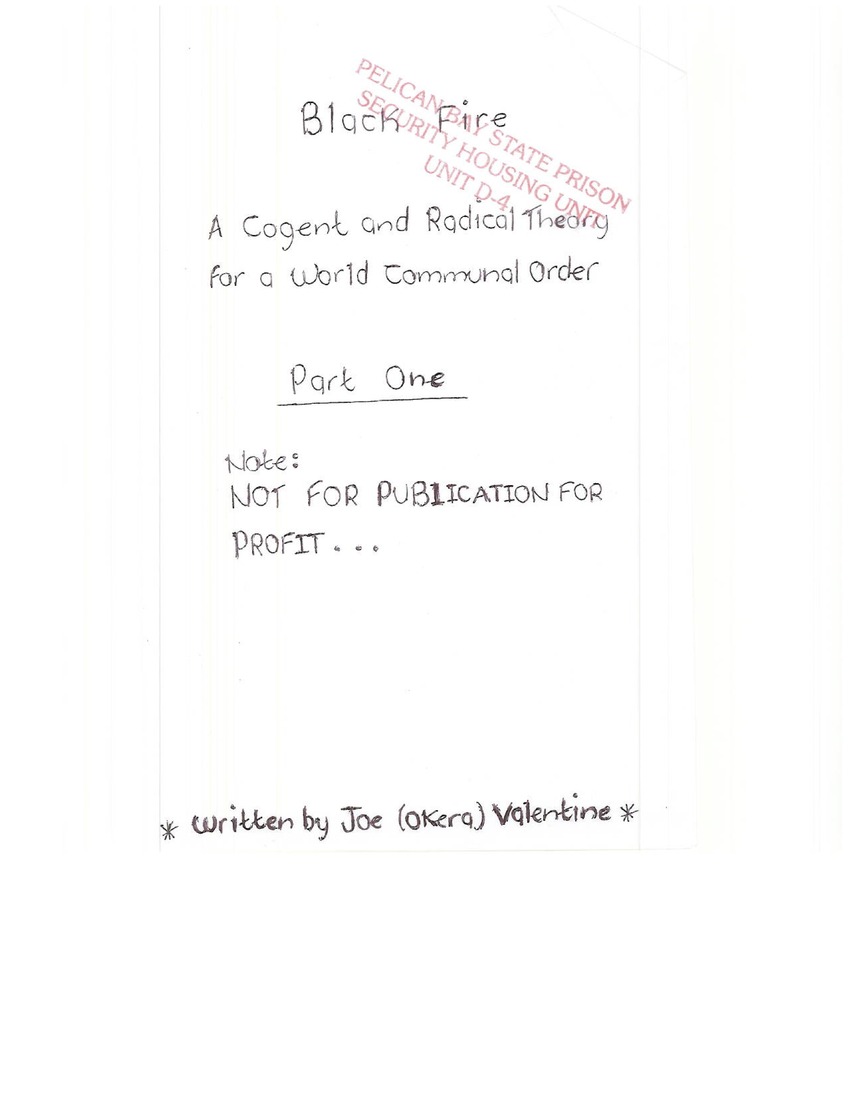 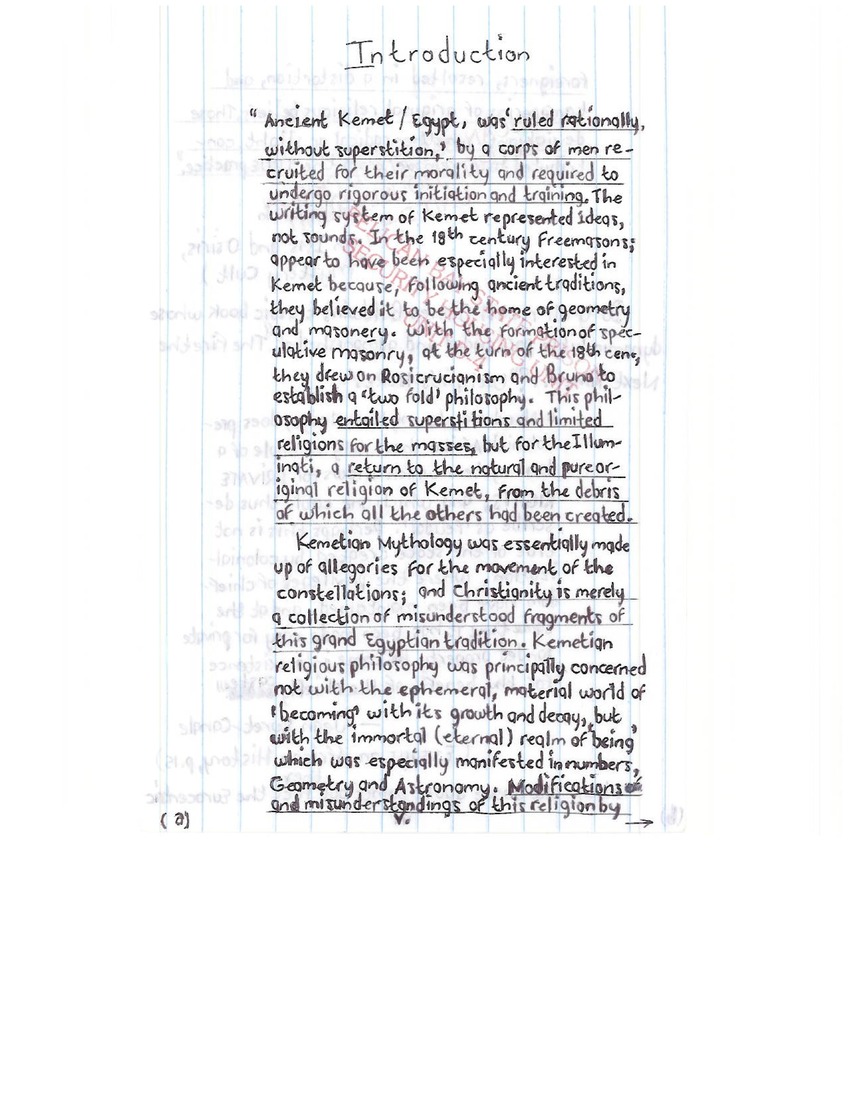 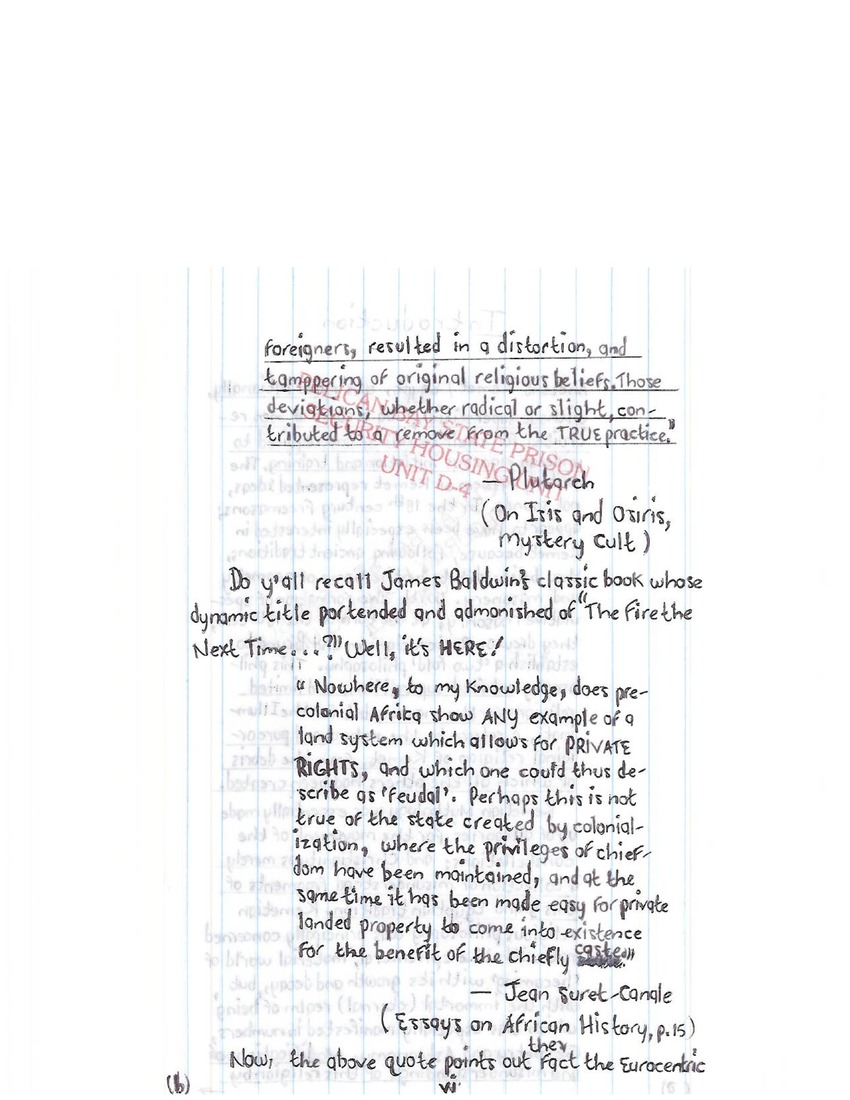 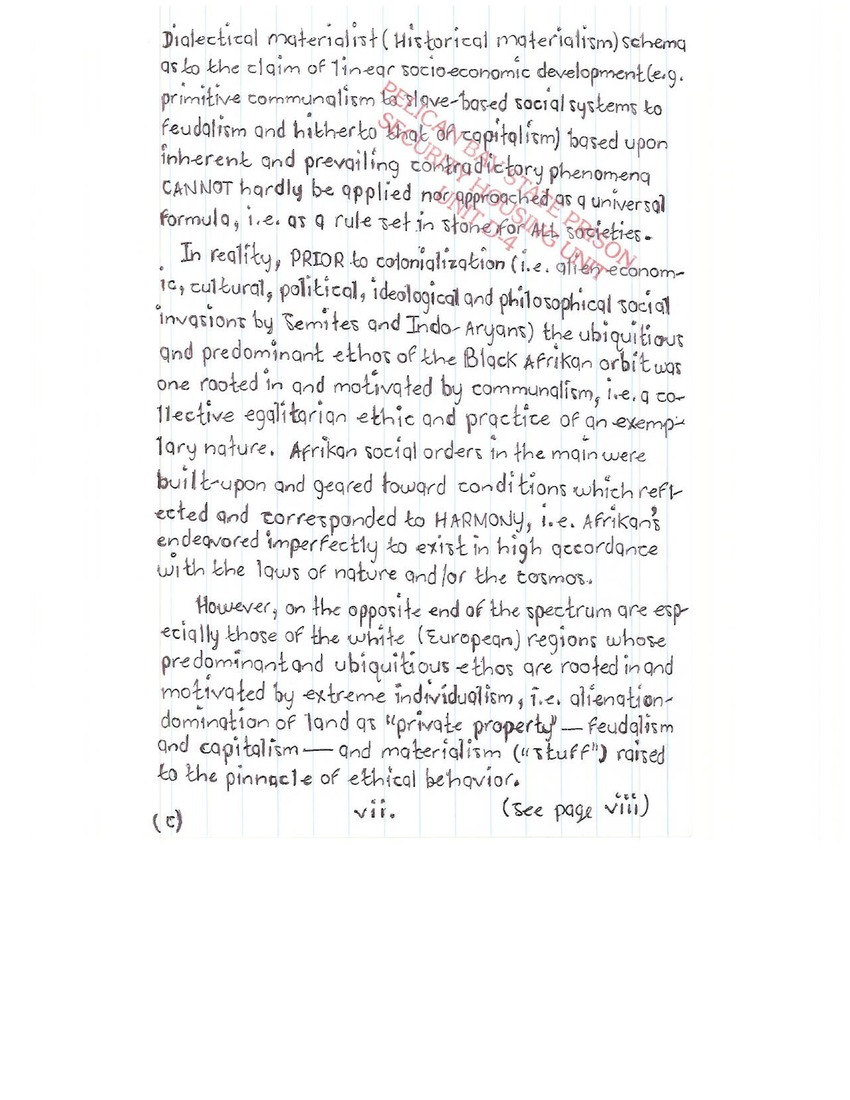 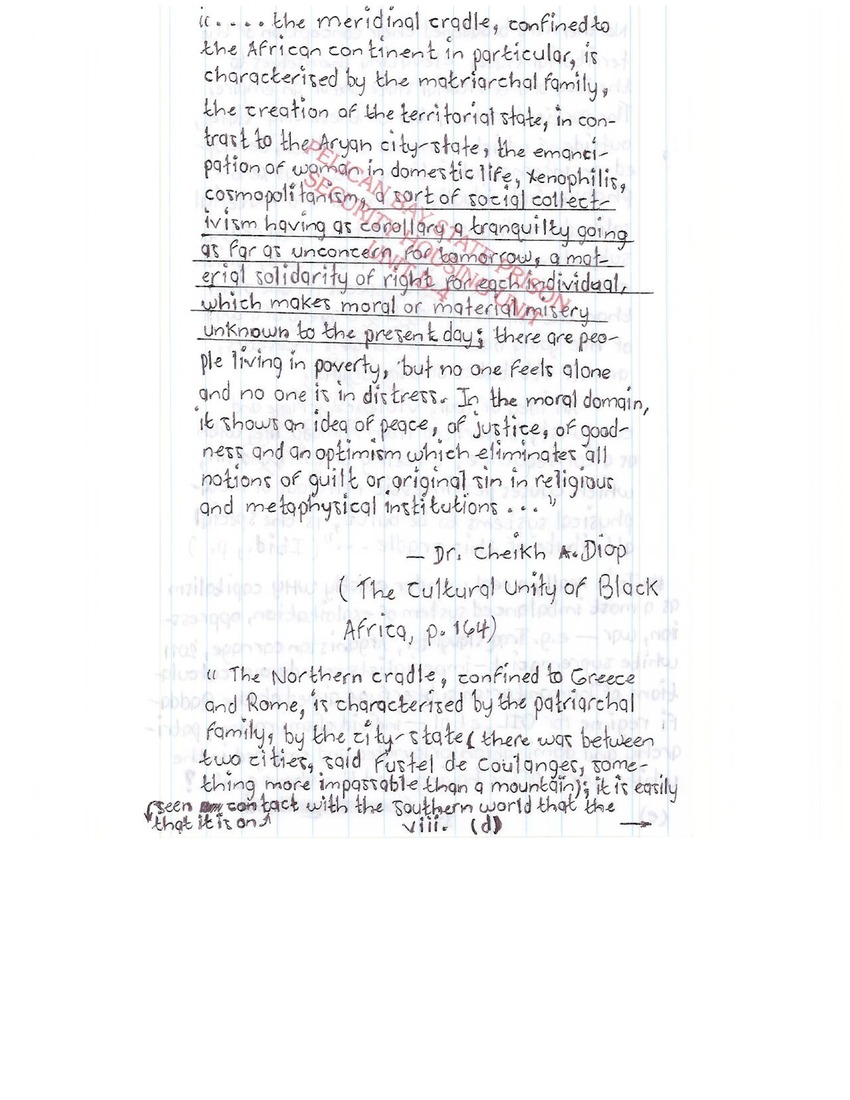 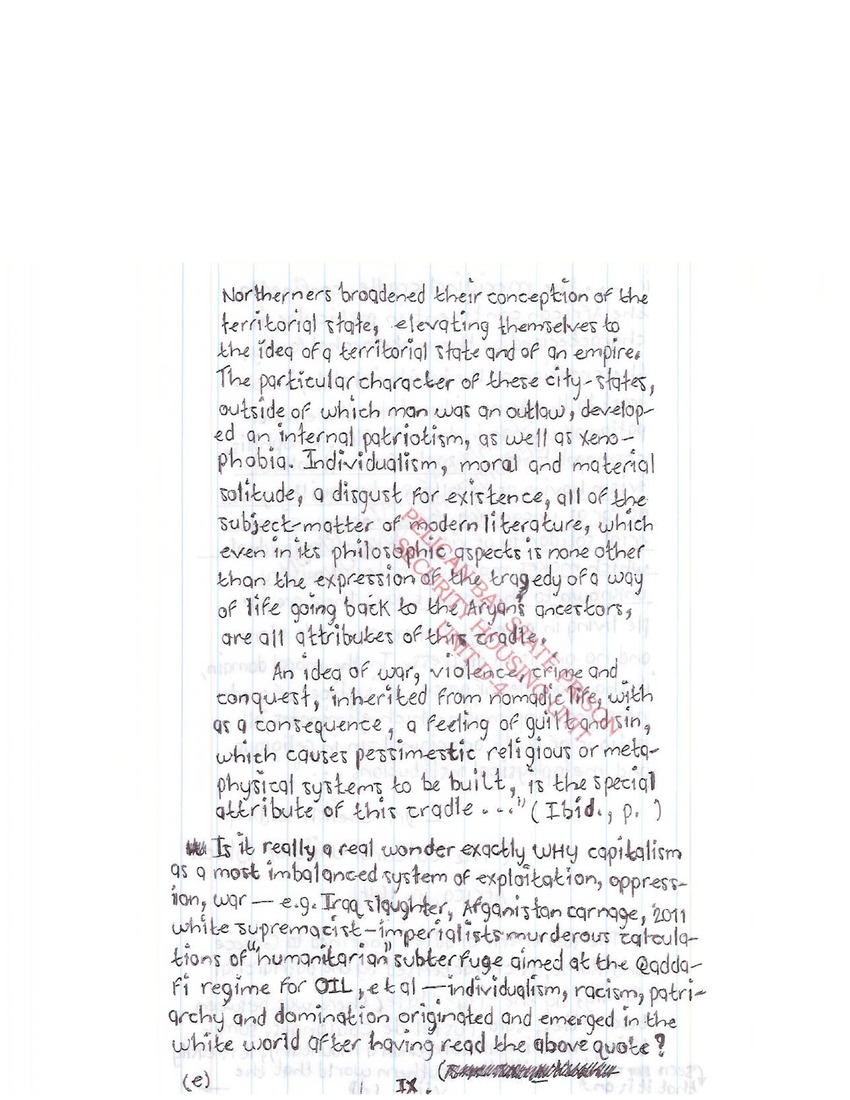 A cogent and radical theory for a world communal order

Part One
Note: NOT FOR PUBLICATION OR PROFIT

Introduction
"Ancient Kemet/Egpyt was; ruled rationally, without superstition,' by a corps of men recruited for their morality and required to undergo rigorous initiation and training. The writing system of Kemet represented ideas, not sounds. In the 18th century Freemasons; appear to have been especially interested in Kemet because, following ancient traditions, they believed it to be the home of geometry and masonry. With the formation of speculative masonry, at the turn of the 18th cent., they drew on Rosicrucianism and Bruna to establish a 'two-fold' philosophy. This philosophy entailed superstitions and limited religions for the masses, but for the Illuminati, a return to the natural and pure original religion of Kemet, from the debris of which all the others had been created.
Kemetian Mythology was essentially made up of allegories for the movement of constellations, and Christianity is merely a collection of misunderstood fragments of this grand Egyptian tradition. Kemetian religious philosophy was principally concerned not with the ephemeral, material world of 'becoming with its growth and decay, but, with the immortal (eternal) realm of being which was especially manifested in numbers, geometry and astronomy. Modifications and misunderstandings of this religion by foreigners resulted in a distortion, and tampering of original religious beliefs. Those deviations, whether radical or slight, contributed to a remove from the TRUE practice."
-Plutarch
(On Iris and Osiris, mystery cult)

By this, I mean to say that in truth the theory of a unity of opposites or dualities is in an ultimate sense UNTRUE and rooted in a PURE ILLUSION as modern science nor physics (e.g. M-Theory) has confirmed. Yes, at bottom dualities spring (or sprung) from NON-DUALITY. True scientific oriented religion is geared precisely toward revealing or teaching this greater knowledge (wisdom) of reality and by materialist dialectics being rigidly rooted in a worldview which dictates perceiving and hence treating reality (i.e. nature or the universe) as an amalgamation of "mutually exclusive" dueling independent extreme individualism in private domain functionality - fragments of matter in motion it serves as an additional psychological barrier in which to overcome as far as functioning to promote and reinforce FALSE notions of other forms of "CLASS DIVISIONS" or "CLASS DISTINCTIONS" which in fact DO NOT prevail or exist (only in terms of forms) in nature, i.e. physical reality is an INDISTINGUISHABLE process and its manifest-forms merely "appear" to be contradictory in nature or based upon duality.
If human beings worldview is based upon a dichotomized objective reality - to the extreme degree of even severing the "spirit" from nature in some fanciful minds - where domains are divided and treated based upon value perception (i.e., hierarchy and utility merit), then, is it really a wonder how and why this approach toward reality is inevitably transposed onto human affairs or societies in the form of sexism, racism, classism, colonialism, et al?
"...As the fabric continues to shrink, the temperature rises unabated, as does the density of the primordial plasma. As we imagine running the clock backward from the age of the presently observed universe, about 15 billion years, the universe as we know it is crushed to an even smaller size. The matter making up everything - every car, house, building, mountain on earth; the earth itself; the moon, Saturn, Jupiter, and every other planet; the sun and every other star in the milky way; the Andromeda galaxy with its 100 billion stars and each and every other of the more than 100 billion galaxies - is squeezed by a comic vise to astounding density. And the clock is turned back to even earlier times, the whole of the cosmos is compressed to the size of an orange, a lemon, a pea, a grain of sand, and to yet a tinier size still..." - The Elegant Universe, p. 82
"I think that a reformulation of quantum mechanics which will resolve many of its puzzles is just around the corner. I think many share the view that the recently uncovered dualities point toward a new more geometrical framework for quantum mechanics, in which space, time, and quantum properties will be inseparably joined together."
-Cumrun Vafa

As is now accepted and confirmed the four forces of the Universe (gravity, electromagnetism, weak and strong nuclear forces) are theoretically understood and treated as symmetries: equivalence, principle, gauge symmetry, etc. Still, further, scientists have accepted and confirmed that each of these theories (e.g. special and general relativity, et al) actually MERGE into and thus represent ONE REALITY.
"Georgi, Quinn, and Weinberg took this realization and ran with it to a remarkable end. They showed that when these effects of the quantum frenzy are carefully accounted for, the net result is that the strengths of all three nongravitational forces are driven together. Whereas the strengths of these forces are very different on sales accessible to current technology, Georgi, Quinn, and Weinberg argued that this difference is actually due to the different effect that the haze of microscopic quantum activity has on each force. Their calculations showed that if this haze is penetrated by examining the forces not on everyday scales but as they act on distances of about a hundredth of a billionth of a billionth (10^29) of a centimeter (a mere factor of ten thousand larger than the Planck length), the three nongravitational force strengths appear to become equal."
The fourth force, gravity, is merged with the three nongravitational forces by what is known as the gravitation. Thus, we discern here that in a basic and ultimate sense there are no "class divisions" or "class distinctions" as to reality, and hence the idea of a "class struggle" or "class warfare" is ALIEN and inapplicable to reality, i.e. "class struggle" is actually based upon HUMAN BEINGS social, economic, and political FALSE constructs which due to their laws being DEVIATIONS from NATURE amount to ARTIFICIALITIES rooted in UNNATURAL and INTENSE human PSYCHOLOGICAL ANTAGONISMS.
In a word, human exploitation, economic monopoly, practices of private property and profit motive for accumulation, alienation-domination in the form of patriarchy, racism, colonialism, neo-colonialism (imperialism), slavery, militarism, et al are due to a truly DISTORTED WORLDVIEW and CULTURAL PATHOLOGY that births human beings whom exist and function on the basis of destructive ideological frameworks.
"However, neither all the aristocratic hierarchies nor the development of the state, are able to modify the rules concerning land. G.V. Kabore says of the Mossi aristocracy: 'Their authority was exercised upon men and goods, without reaching landed property itself, which remained the prerogative of the indigenous people."
(African History: From the Slave Trade to Neo-Colonialism, p.14)
"If Egypt... belongs to the AMP, it belongs to the most brilliant civilizations of the Metal Age, during the time when man definitively breaks away from the economy of the soil, passes to dominating nature, and invests new forms of agriculture, architecture, mathematics, writing, commerce, currency, law, religions, etc. The AMP, therefore, does not mean stagnation, but rather the greatest progress accomplished on the basis of communal forms of production."
- Maurice Godelier

It is thus ONLY on the basis of a destructive and repressive (i.e. reactionary) ideo-philosophical framework (of many diverse and negative forms) that "matters of matter" (material wealth in power over antagonisms) are understood and approached from the standpoint of MASTERY OVER as opposed to HARMNOIZATION, i.e. the energy-matter dynamic in which ALL of existence ie but ONE expressed in seemingly differentiating forms is understood and treated from the standpoint of alienation-domination toward the arrogantly and pathetic disregard and unnecessary ruinous peril of us all!
I propose that SCIENTIFIC ORIENTED (through and through) RELIGION (and/or SACRED SCIENCE be deployed via cultivated and deeply devoted CADRE (i.e.* Ankobia) rooted in a RADICAL COMMUNALIST WORLDVIEW and EGALITARIAN POWER ETHOS with the strategic aim of imbuing the hearts and minds of the masses with an understanding of reality. (Life and the natural order) which conditions and inspires in them a profound desire and inclination to engage in POLITICAL STRUGGLES toward the elimination of the artificial humanmade CHAOS as exemplified by those socioeconomic, cultural, and political values and deviant constructs in which prevail and persist due to default so as to give birth to those foundational principles required for the wise and justly due emergence of universal egalitarianism as is the NATURAL WAY.
"Once gravity is included in the framework, all possible observational vantage points are on a completely equal footing. Beyond the intrinsic aesthetic appeal of this egalitarian treatment of all motion, we have seen these symmetry principles played a pivotal role in the stunning conclusions regarding gravity that Einstein found.
(The Elegant Universe, p.170)