An Outline of My Childhood 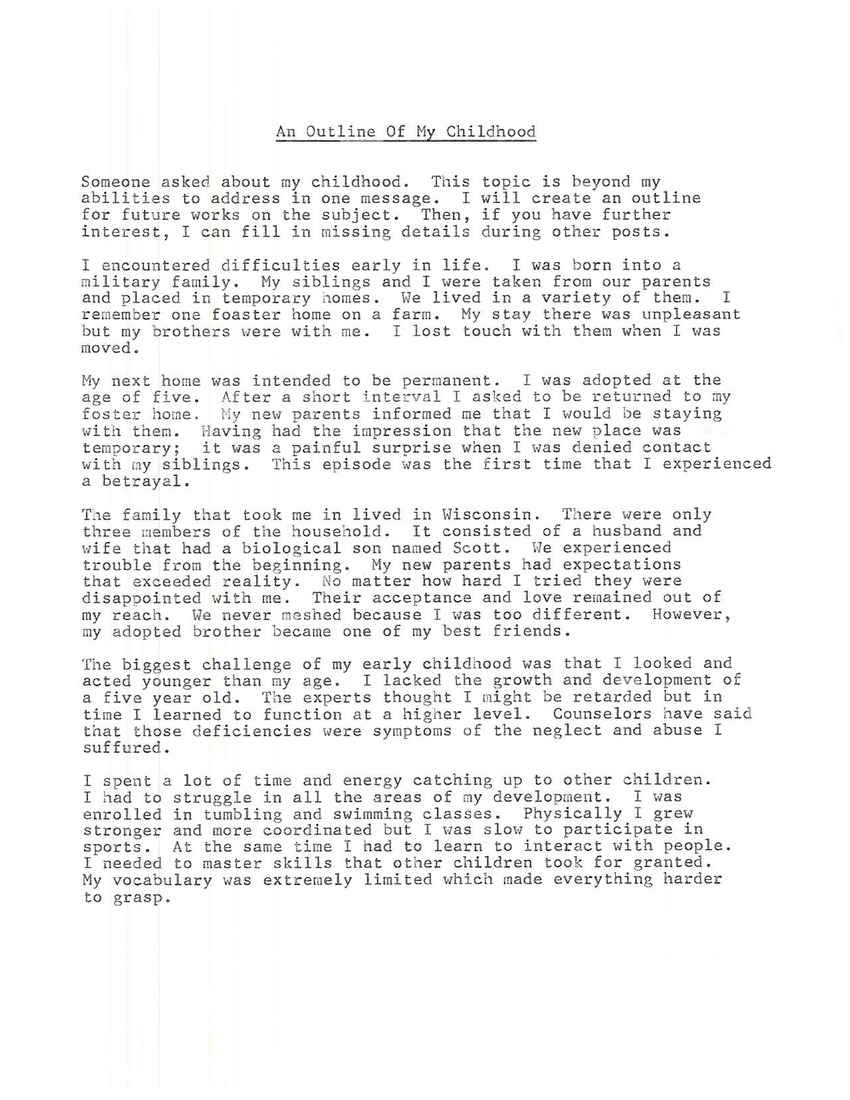 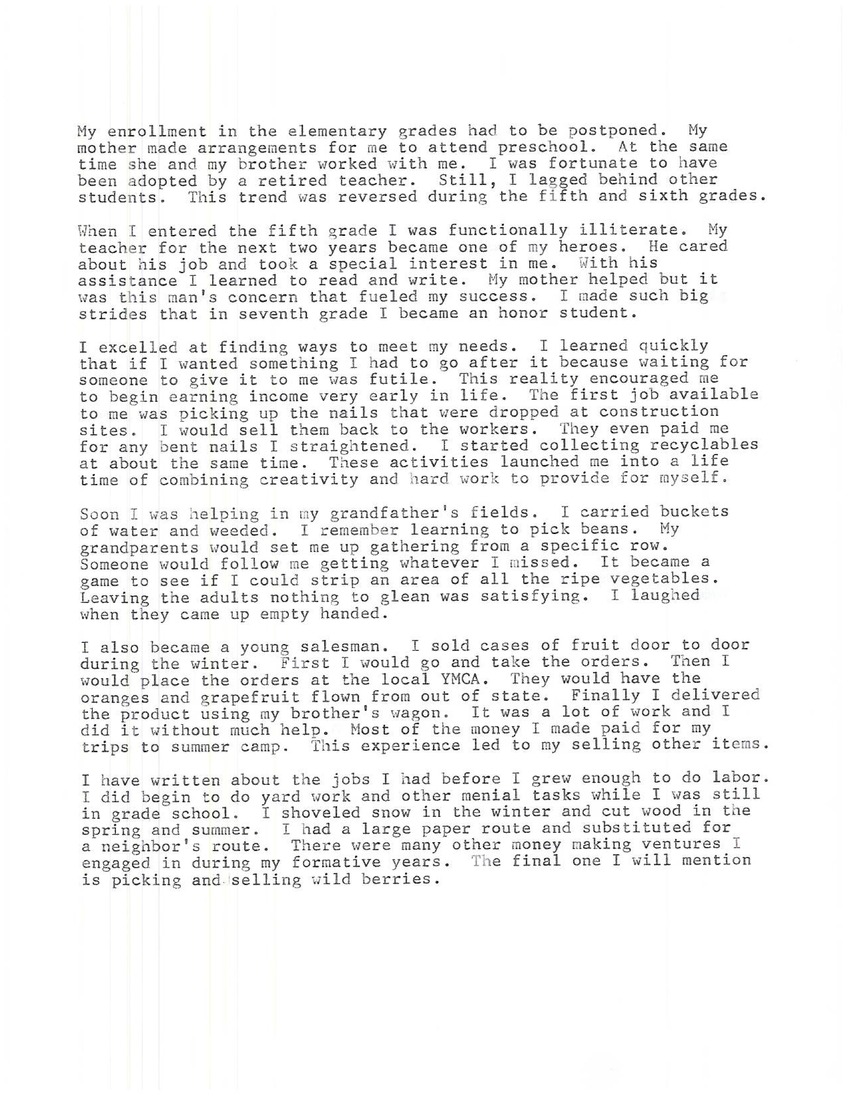 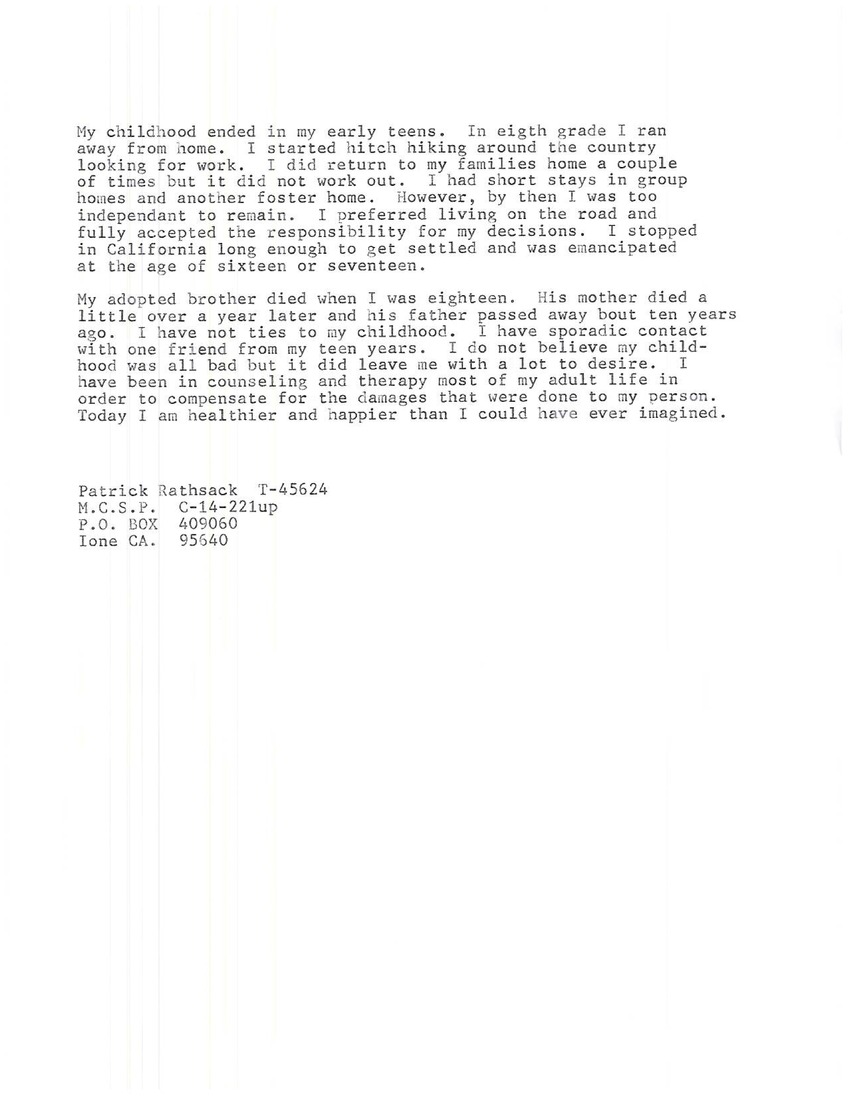 AN OUTLINE OF MY CHILDHOOD

Someone asked about my childhood. This topic is beyond my abilities to address in one message. I will create an outline for future works on the subject. Then, if you have further interest, I can fill in the missing details during other posts.

I encountered difficulties early in life. I was born into a military family. My siblings and I were taken from our parents and placed in temporary homes. We lived in a variety of them. I remember one foster home on a farm. My stay there was unpleasant but my brothers were with me. I lost touch with them when I was moved.

My next home was intended to be permanent. I was adopted at the age of five. After a short interval, I asked to be returned to my foster home. My new parents informed me that I would be staying with them. HAving had the impression that the new place was temporary; it was a painful surprise when I was denied contact with my siblings. This episode was the first time that I experienced a betrayal.

The family that took me in lived in Wisconsin. There were only three members of the household. It consisted of a husband and wife that had a biological son named Scott. We experienced trouble from the beginning. My new parents had expectations that exceeded reality. No matter how hard I tried they were disappointed with me. Their acceptance and love remained out of my reach. We never meshed because I was too different. However, my adopted brother became one of my best friends.

The biggest challenge of my early childhood was that I looked and acted younger than my age. I lacked the growth and development of a five year old. The experts thought I might be retarded but in time I learned to function at a higher level. Counselors have said that those deficiencies were symptoms of the neglect and abuse I suffered.

I spent a lot of time and energy catching up to other children. I had to struggle in all areas of my development. I was enrolled in tumbling and swimming classes. Physically I grew stronger and more coordinated but I was slow to participate in sports. At the same time I had to learn to interact with people. I needed to master skills that other children took for granted. My vocabulary was extremely limited which made everything harder to grasp.

My enrollment in the elementary grades had to be postponed. My mother made arrangements for me to attend preschool. At the same time she and my brother worked with me. I was fortunate to have been adopted by a retired teacher. Still, I lagged behind other students. This trend was reversed during the fifth and sixth grades.

When I entered the fifth grade I was functionally illiterate. My teacher for the next two years became one of my heros. He cared about his job and took a special interest in me. With his assistance I learned to read and write. My mother helped but it was this man's concern that fueled my success. I made such big strides that in seventh grade I became an honor student.

I excelled at finding ways to meet my needs. I learned quickly that if I wanted something I had to go after it because waiting for someone to give it to me was futile. This reality encouraged me to begin earning income very early in life. The first job available to me was picking up the nails that were dropped at constructions sites. I would sell them back to the workers. They even paid me for any bent nails I straightened. I started collecting recyclables at about the same time. These activities launched me into a lifetime of combining creativity and hard work to provide for myself.

Soon I was helping in my grandfather's fields. I carried buckets of water and weeded. I remember learning to pick beans. My grandparents would set me up gathering from a specific row. Someone would follow me getting whatever I missed. It became a game to see if I could strip an area of all the ripe vegetables. Leaving the adults nothing to glean was satisfying. I laughed when they came up empty handed.

I also became a young salesman. I sold cases of fruit door to door during the winter. First, I would go and take the orders. Then, I would place the orders at the local YMCA. They would have the oranges and grapefruit flown from out of state. Finally, I delivered the product using my brother's wagon. It was a lot of work and I did it without much help. Most of the money I made paid for my trips to summer camp. This experience led to my selling other items.

I have written about the jobs I had before I grew enough to do labor. I did begin to do yard work and other menial tasks while I was still in grade school. I shoveled snow in the winter and cut wood in the spring and summer. I had a large paper route and substituted for a neighbor's route. There were many other money making ventures I engaged in during my formative years. The final one I will mention is picking and selling wild berries.

My childhood ended in my early teens. In eighth grade, I ran away from home. I started hitch hiking around the country looking for work. I did return to my family's home a couple of times but it did not work out. I had short stays in group homes and another foster home. However, by then I was too independent to remain. I preferred living on the road and fully accepted the responsibility for my decisions. I stopped in California long enough to get settled and was emancipated at the age of sixteen or seventeen.

My adopted brother died when I was eighteen. His mother died a little over a year later and his father passed about ten years ago. I have not ties to my childhood. I have sporadic contact with one friend from my teen years. I do not believe my childhood was all bad but it did leave me with a lot to desire. I have been in counseling and therapy most of my adult life in order to compensate for the damages that were done to my person. Today, I am healthier and happier that I could have ever imagined.

Patrick:
Your childhood was unfair. What are your memories of your parents? Your sister? Your older brothers? Were you too young to even remember them or why you were pulled away from them? I am impressed with how self-reliant you became at such a young age. Was summer camp fun? Where did you go? I too went to a YMCA Camp Nan-A-Bo-Sho in Wisconsin.
Your writing is detailed and informative....time to add a few more power words...descriptors of places, feelings and people. Try to learn a new word every day. I could send you the power words they use for college entrance tests. They actually have rock songs that teach these words. Very amusing. You are smart. Keep writing. I enjoy seeing your improvement.