In Search of My True Self 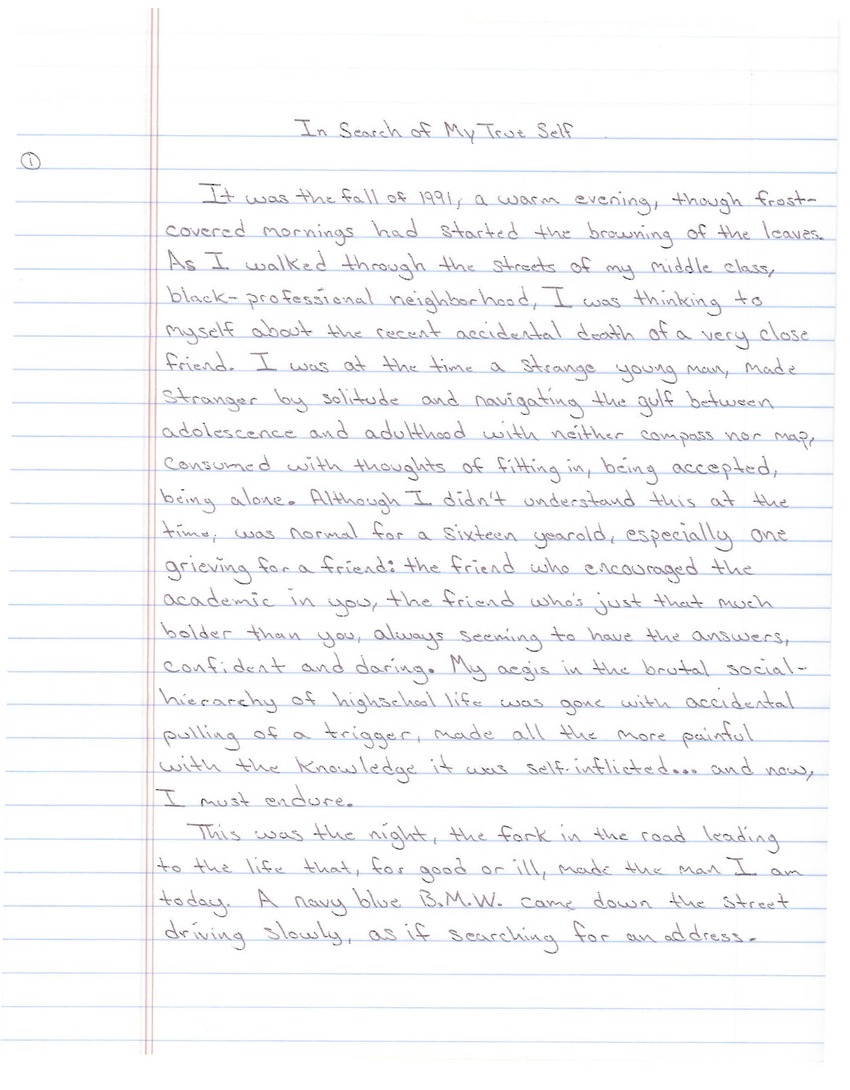 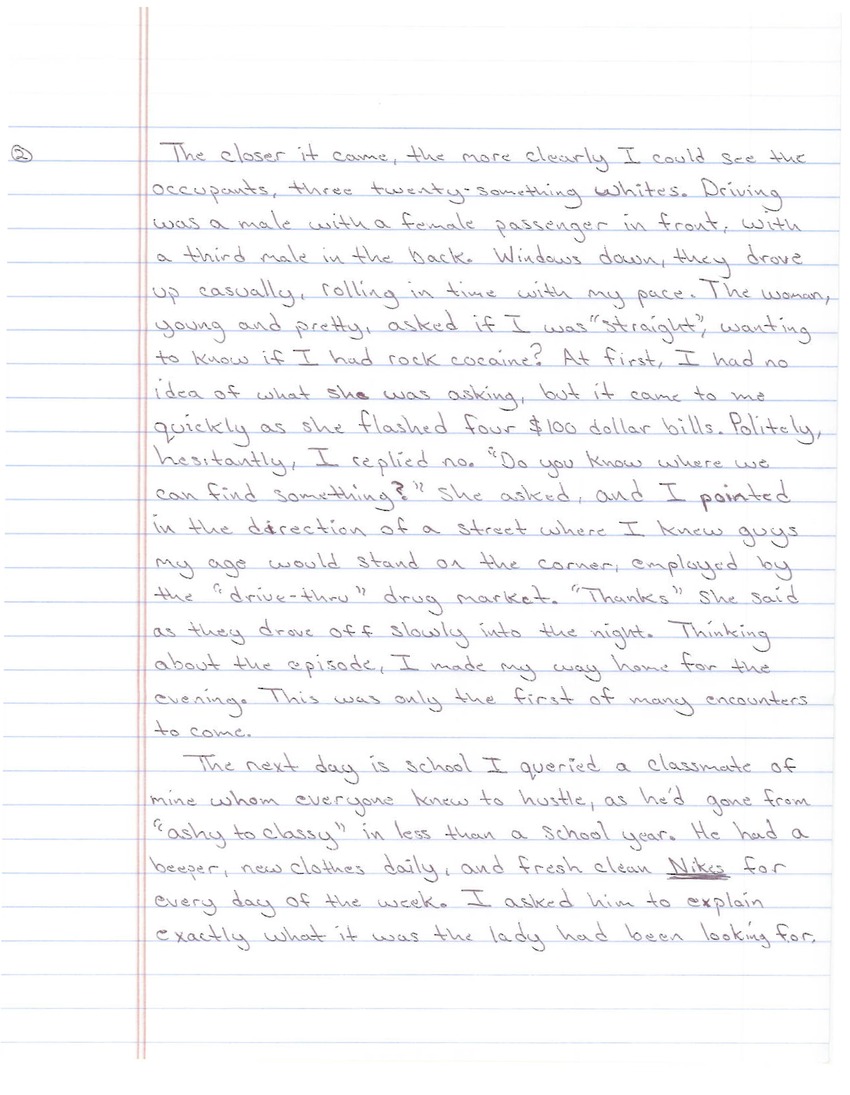 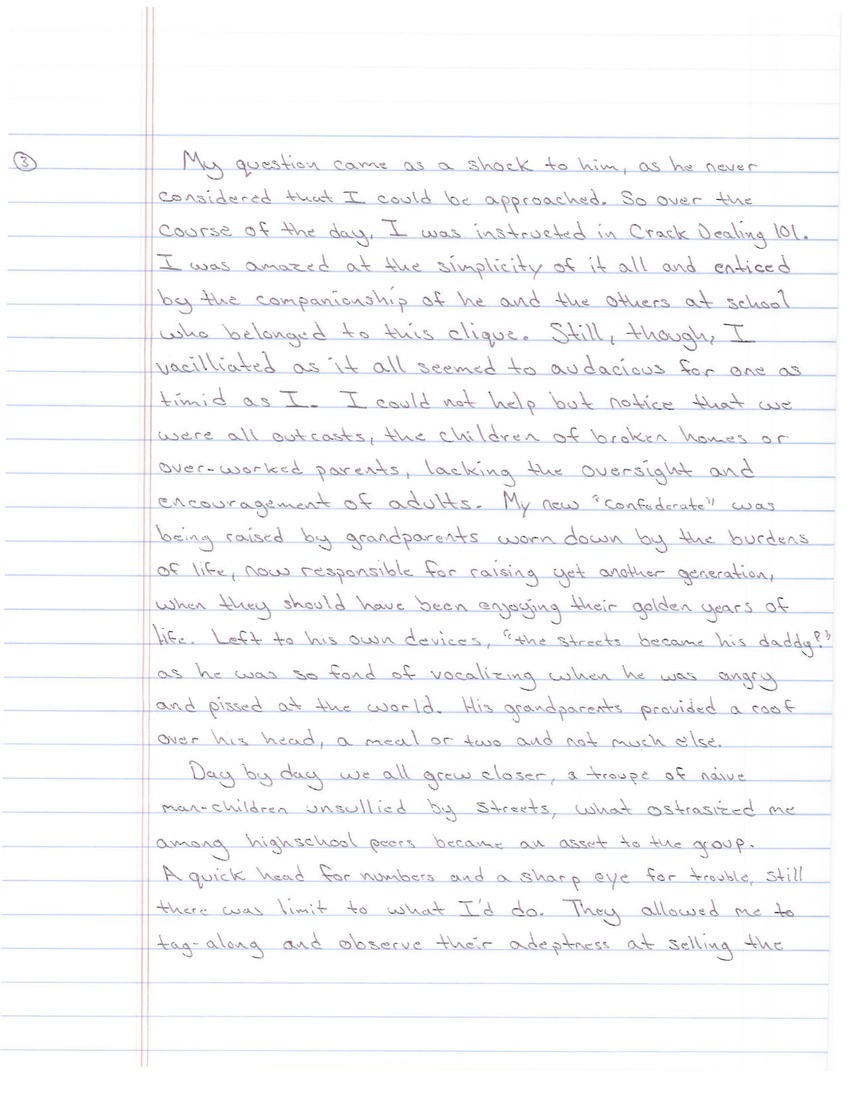 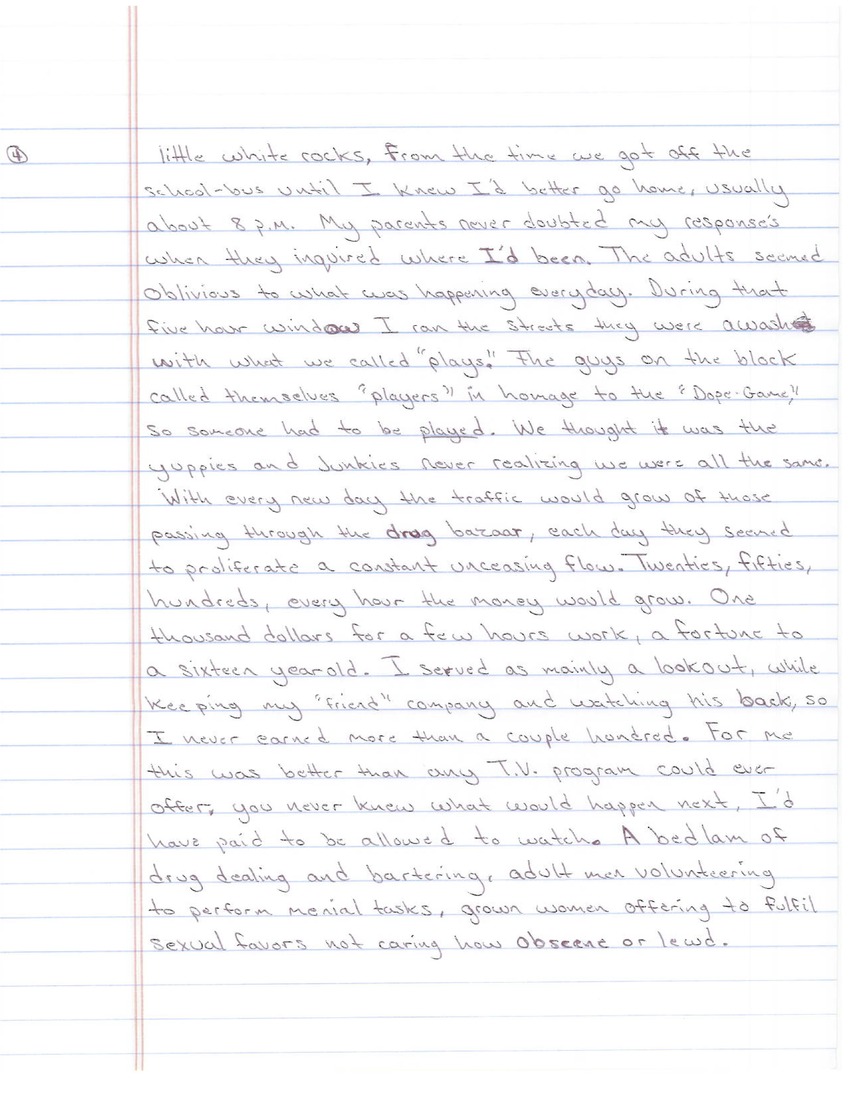 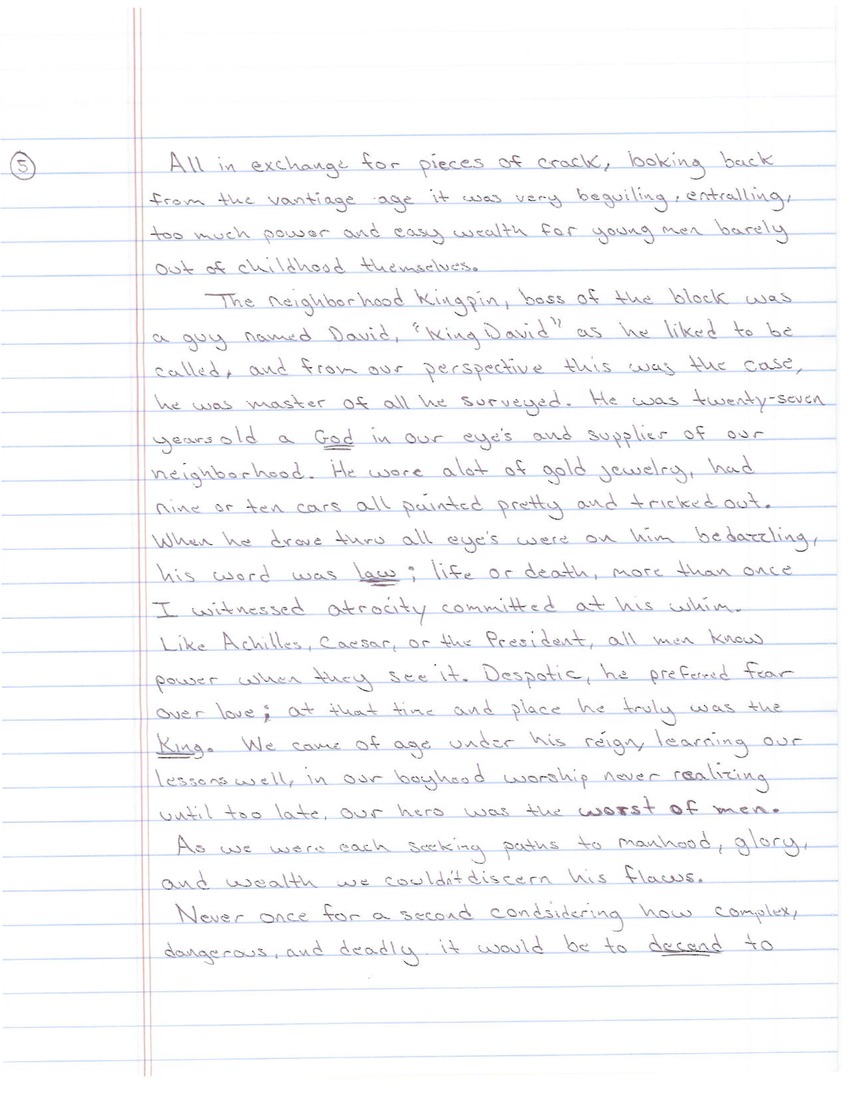 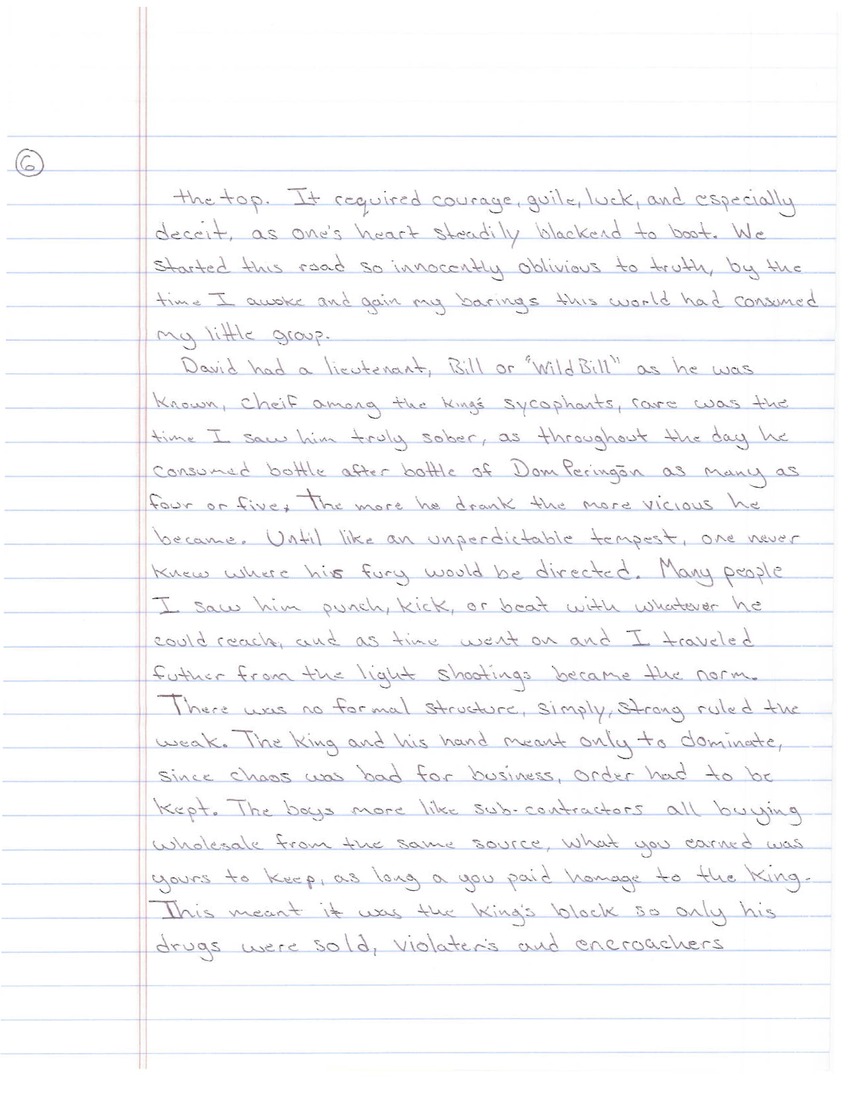 In Search of My True Self

It was the fall of 1991, a warm evening, though frost-covered mornings had started the browning of the leaves. As I walked through the streets of my middle class, black-professional neighbourhood, I was thinking to myself about the recent accidental death of a very close friend. I was at the time a strange young man, made stranger by solitude and navigating the gulf between adolescence and adulthood with neither compass nor map, consumed with the thoughts of fitting in, being accepted, being alone. Although I didn't understand this at the time, was normal for a sixteen year old, especially one grieving for a friend: the friend who encouraged the academic in you, the friend who's just that much bolder than you, always seeming to have the answers, confident and daring. My aegis in the brutal social hierarchy of high school life was gone with accidental pulling of a trigger, made all the more painful with the knowledge it was self inflicted...and now, I must endure.

This was the night, the for in the road leading to the life that, for good or ill, made the man I am today. A navy blue B.M.W came down the street driving slowly, as if searching for an address. The closer it came, the more clearly I could see the occupants, three twenty-something whites. Driving was a male with a female passenger in the front, with a third male in the back. Windows down, they drove up casually, rolling in time with my pace. The woman, young and pretty, asked if I was "straight", wanting to know if I had rock cocaine? At first, I had no idea of what she was asking, but it came to me quickly as she flashed four $100 dollar bills. Politely, hesitantly, I replied no. "Do you know where we can find something?" she asked, and I pointed in the direction of a street where I knew guys my age would stand on the corner, employed by the "drive-thru" drug market. "Thanks" she said as they drove off slowly into the night. Thinking about the episode, I made my way home for the evening. This was only the first of many encounters to come.

The next day is school, I queried a classmate of mine whom everyone knew to hustle, as he'd gone from "ashy to classy" in less than a school year. He had a beeper, new clothes daily, and fresh clean Nikes for every day of the week. I asked him to explain exactly what it was the lady had been looking for. My question came as a shock to him, as he never considered that I could be approached. So over the course of the day, I was instructed in Crack Dealing lol. I was amazed at the simplicity of it all and enticed by the companionship of he and the others at school who belonged to this clique. Still, though, I vacilliated as it all seemed too audacious for one as timid as I. I could not help but notice that we were all outcasts, the children of broken homes or over-worked parents, lacking the oversight and encouragement of adults. My new "confederate" was being raised by grandparents worn down by the burdens of life, now responsible for raising yet another generation, when they should have been enjoying their golden years of life. Left to his own devices, "the streets became his daddy!" as he was so fond of vocalizing when he was angry and pissed at the world. His grandparents provided a roof over his head, a meal or two and not much else.

Day by day we all grew closer, a troupe of naive man-children unsullied by streets, what ostrasized me among high school peers became and asset to the group. A quick head for numbers and a sharp eye for trouble, still there was a limit to what I'd do. They allowed me to tag along and observe their adeptness at selling the little white rocks, from the time we got off the school but until I knew I'd better go home, usually about 8pm. My parents never doubted my responses when they enquired where I'd been. The adults seemed oblivious to what was happening every day. During that five hour window I ran the streets they were awake with what we called "plays." They guys on the block called themselves "players" in homage to the "Dope Game" so someone had to be played. We though it was the yuppies and junkies never realising we were all the same. With every new day the traffic would grow of those passing through the drug bazaar, each day they seemed to proliferate a constant unceasing flow. Twenties, fifties, hundreds, every hour the money would grow. One thousand dollars fr a few hours work, a fortune to a sixteen year old. I serves as mainly a lookout, while keeping my "friend" company and watching his back, so I never earned more than a couple hundred. For me this was better than any TV programme could ever offer, you never knew what would happen next, I'd have paid to be allowed to watch. A bedlam of drug dealing and bartering, adult men volunteering to perform menial tasks, grown women offering to fulfil sexual favours not caring how obscene or lewd.
All in exchange for pieces of crack, looking back from the vantage age it was very beguiling, enthralling, too much power and easy wealth for young men barely out of childhood themselves.

The neighbourhood kingpin, boss of the block was a guy named David, "King David" as he liked to be called, and from our perspective this was the case, he was master of all he surveyed. He was twenty-seven years old, a God in our eyes and supplier of our neighbourhood. He wore a lot of gold jewellery; had nine or ten cars all painted pretty and tricked out. When he drove through, all eyes were on him bedazzling, his world was law; life or death, more than once I witnessed atrocity committed at his whim. Like Achilles, Caesar, or the President, all men know power when they see it. Despotic, he preferred fear over love; at that time and place he truly was the King. We came of age under his reign, learning our lessons well, in our boyhood worship never realising until too late, our hero was the worst of men.

As we were each seeking paths to manhood, glory and wealth we couldn't discern his flaws. Never one for a second considering how complex, dangerous and deadly it would be to descend to the top. It required courage, guile, luck and especially deceit, as one's heart steadily blackened to boot. We started this road so innocently, oblivious to truth, by this time I awoke and gained my barrings this world had consumed my little group.

David had a lieutenant, Bill or "Wild Bill" as he was known, chief among the kinds sycophants, rare was the time I saw him truly sober, as throughout the day he consumed bottle after bottle of Dom Peringon as many as four or five. The more he drank, the more vicious he became. Until like an unpredictable tempest, one never knew where his fury would be directed. Many people I saw him punch, kick or beat with whatever he could reach, and as time went on and I travelled further from the light shootings became the norm. There was no formal structure, simply, strong ruled the weak. The Kind and his hand meant only to dominate, since chaos was bad for business, order had to be kept. The boys more sub-contractors all buying wholesale from the same source, what you earned was yours to keep, as long as you paid homage to the King. This meant it was the Kind's block so only his drugs were sold, violators and encroacher's would be punished mercilessly. Beaten and robbed for all they owned, lucky ones escaped with their lives....still, usurpers would try.

As acts once adverse and frightening to my nature became more commonplace, I retained a measure of compassion that made me well liked by the addicts and users, but ridiculed by my new peers, as I often gave earnings for the most desperate of the crack-fiends. More than once I was called weak or stupid by the guys who worked in the block, they would laugh and take my money in exchange for little white rock.

This is a very eloquent and intelligently written story here. Unfortunately it is a story that is repeated over and over again all over the world. I think eventually people will come to their senses, society can't afford to keep cannibalizing it's own youth and box them away forever. Until then stay strong and smart Opollo and take care of yourself.