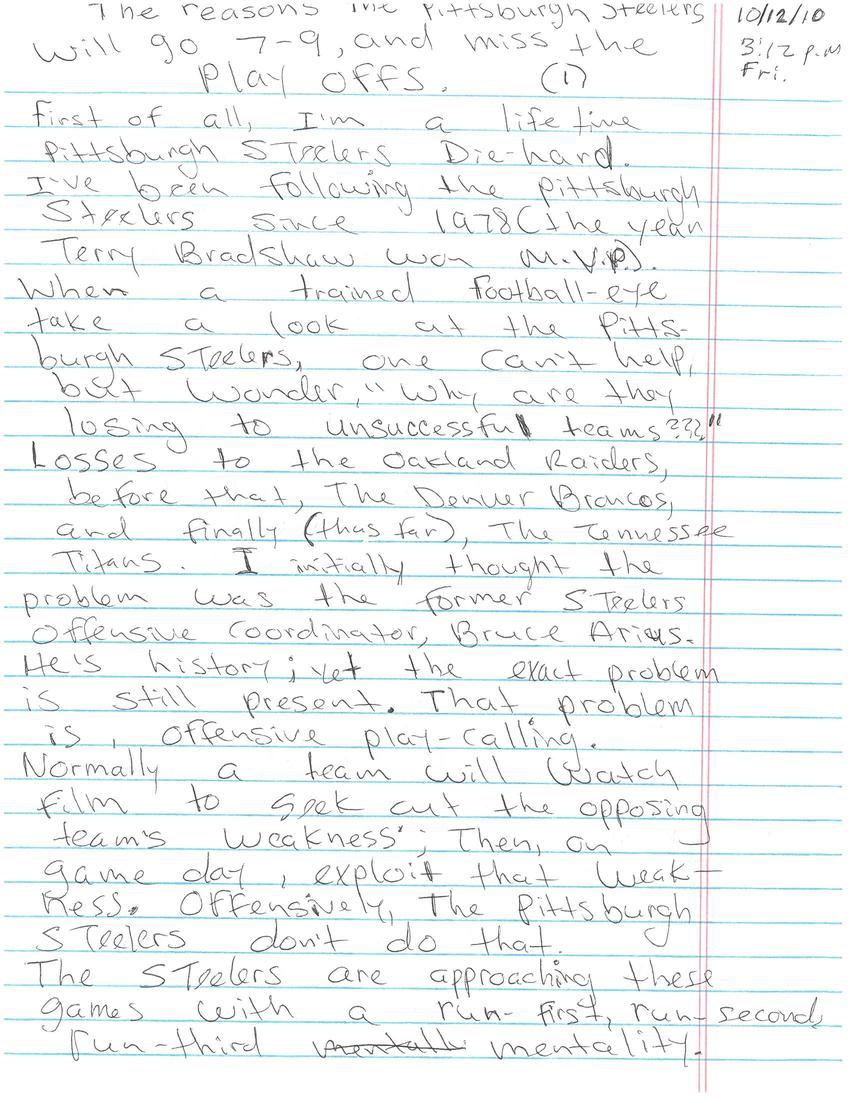 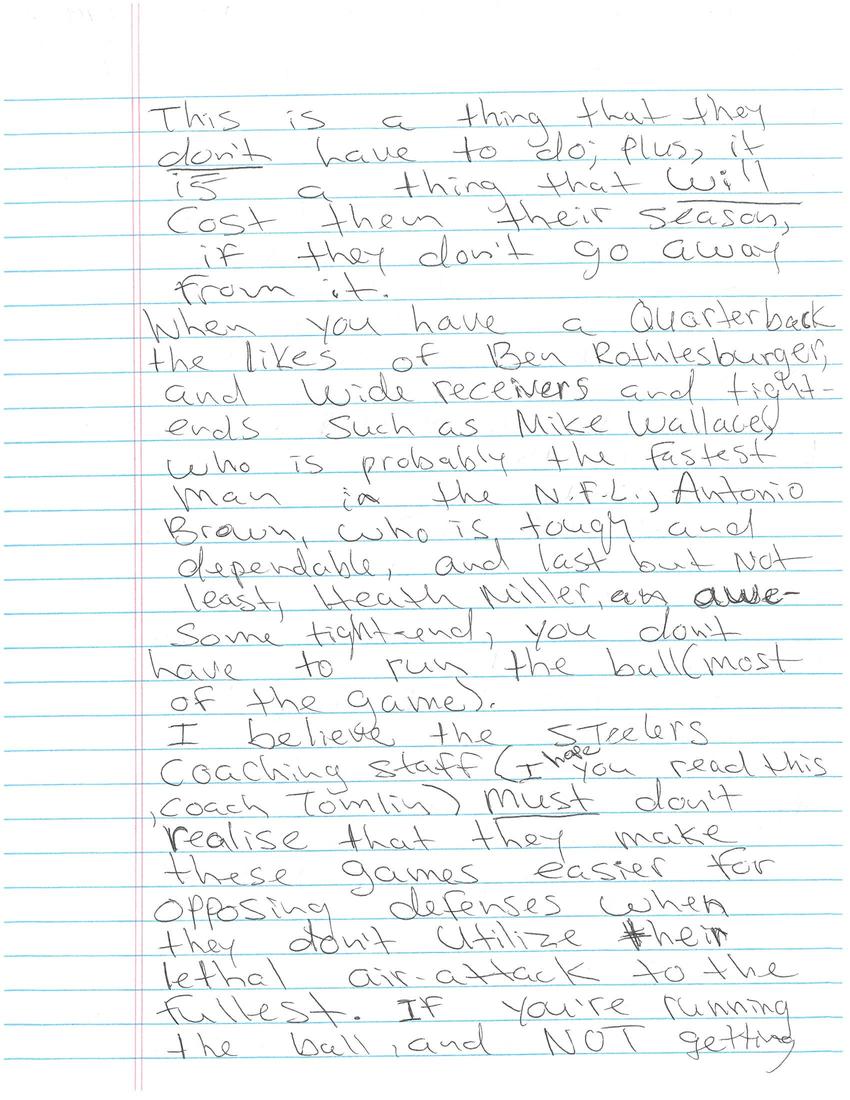 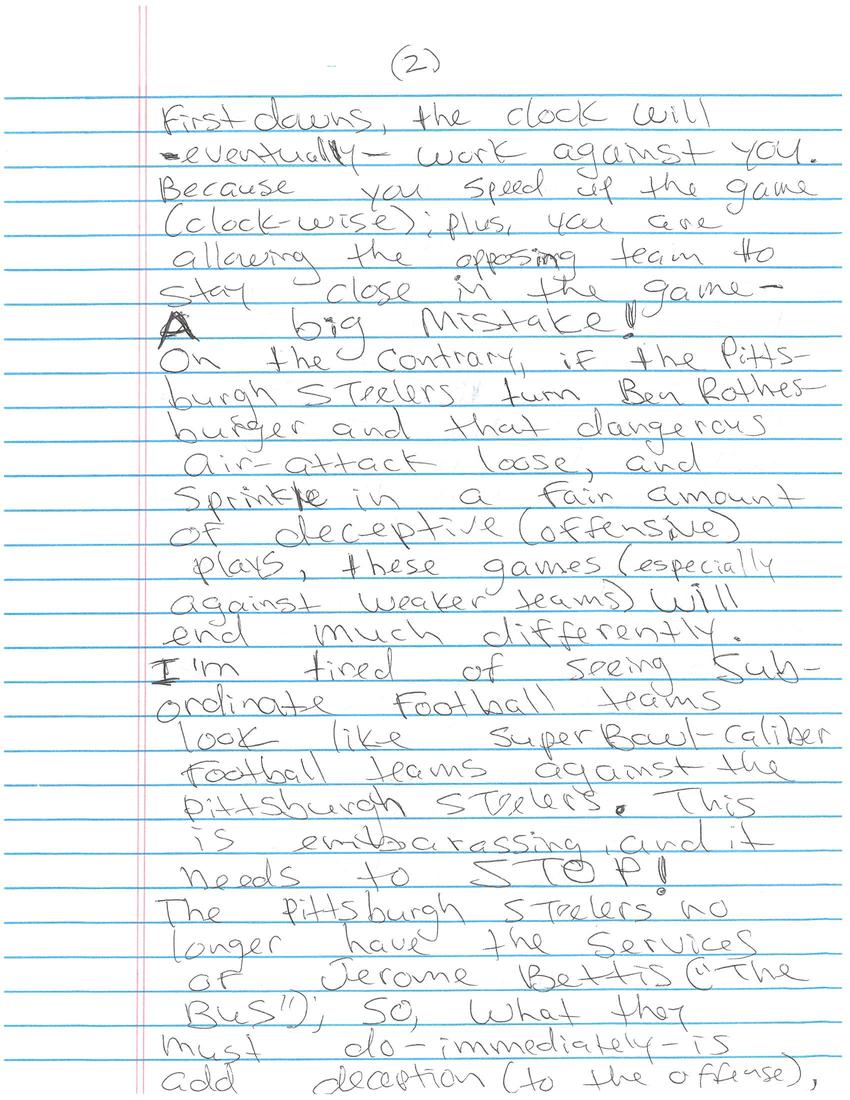 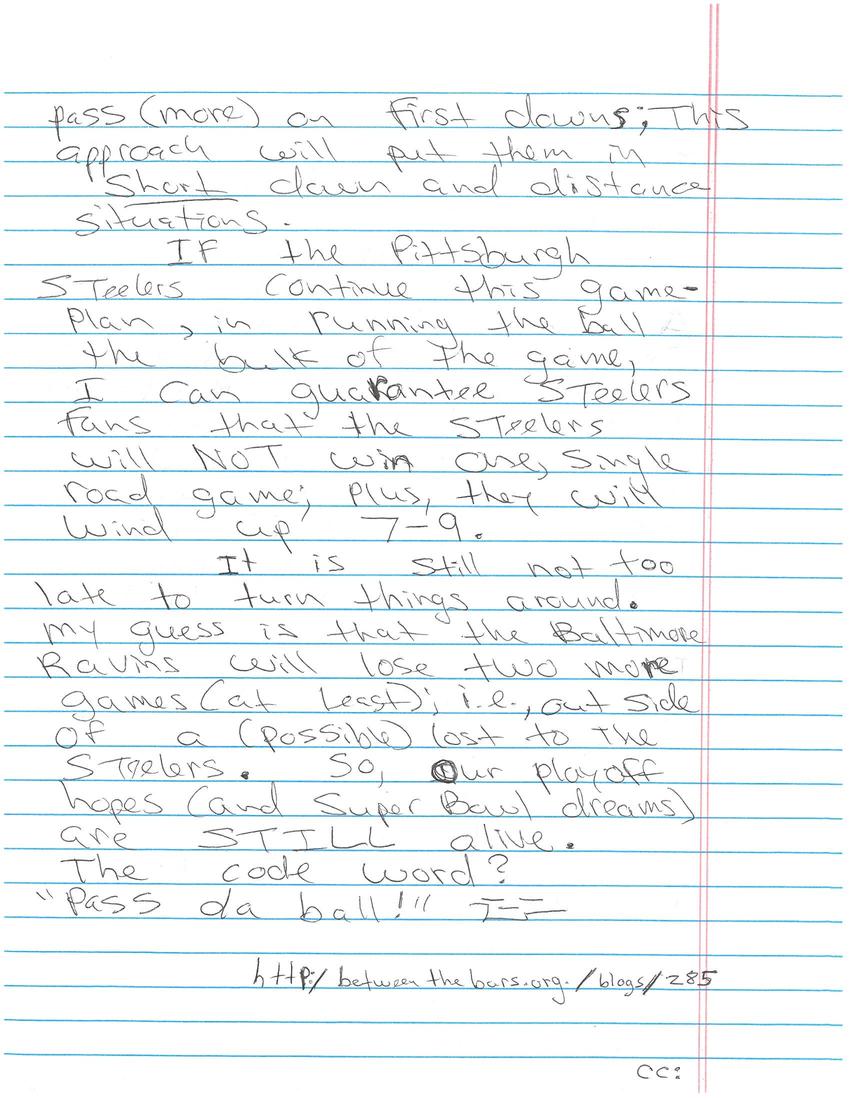 THE REASONS THE PITTSBURGH STEELERS WILL GO 7 - 9, AND MISS THE PLAY OFFS

Losses to the Oakland Raiders, before that, The Denuer Brancos, and finally (thus-far), The Tennessee Titans. I intially thought the problem was the former Steelers offensive coordinator, Bruce Arius. He's history; yet the exact problem is still present. That problem is, offensive play-calling.

Normally a team will watch film to seek out the opposing team's weakness'; then, on game day, exploit that weakness. Offensively, The Pittsburgh Steeelrs don't do that. The Steelers are approaching these games with a run-first, run-second, fun-third mentality. This is a thing that they don't have to do; plu, it is a thing that will cost them their season, if they don't go away from it.

When you have a quarterback the likes of Ben Rothesburger, and wide receivers and tight-ends such as Mike Wallaces, who is probably the fastest man in the N F L Antonio Brown, who is tough and dependable, and last but not least, Heath Miller, an awesome tight-end, you don't have to tiun the ball (most of the game).

I believe the Steelers coaching staff (I hope you read this coach Tomlin) must don't realise that they make these games easier for opposing defenses when they don't utilize their lethal air-attack to the fullest. If you're running the ball, and not getting first downs, the dock clock will eventually - work against you. Because you speed up the game (clock-wise: plus you are allowing the opposing team to stay close in the game - a big mistake!

On the contrary, if the Pittsburgh Steelers turn Ben Rothesburger and that dangerous air-attack loose, and sprinkle in a fair amount of deceptive (offensive) plays, these games (especially against weaker teams) will end much differently.

I'm tired of seeing sub-ordinate football teams look like superbowl-caliber football teams against the Piitsburgh Steelers. This is embarassing, and it neds to STOP!

The Pittsburgh Steelers no longer have the services of Jerome Bettis ("The Bus"), so, what they must do-immediately-is add deception (to the offense), pass (more) on first downs; this approach will put them in short dawn and distance situations.

If the Pittsburgh Steelers continue this game-plan, in running the ball the bulk of the game, I can guarantee Steelers fans that the Steelers will not win one, single road game; plus, they will wind up 7 - 9.

It is still not too late to turn things around. My guess is that the Baltimore Ravins will lose two more games (at least); i.e., outside of a (possible) lost to the Steelers. So, our play off hopes (and super bowl dreams) are STILL alive.