The Teachings Of The New Nation 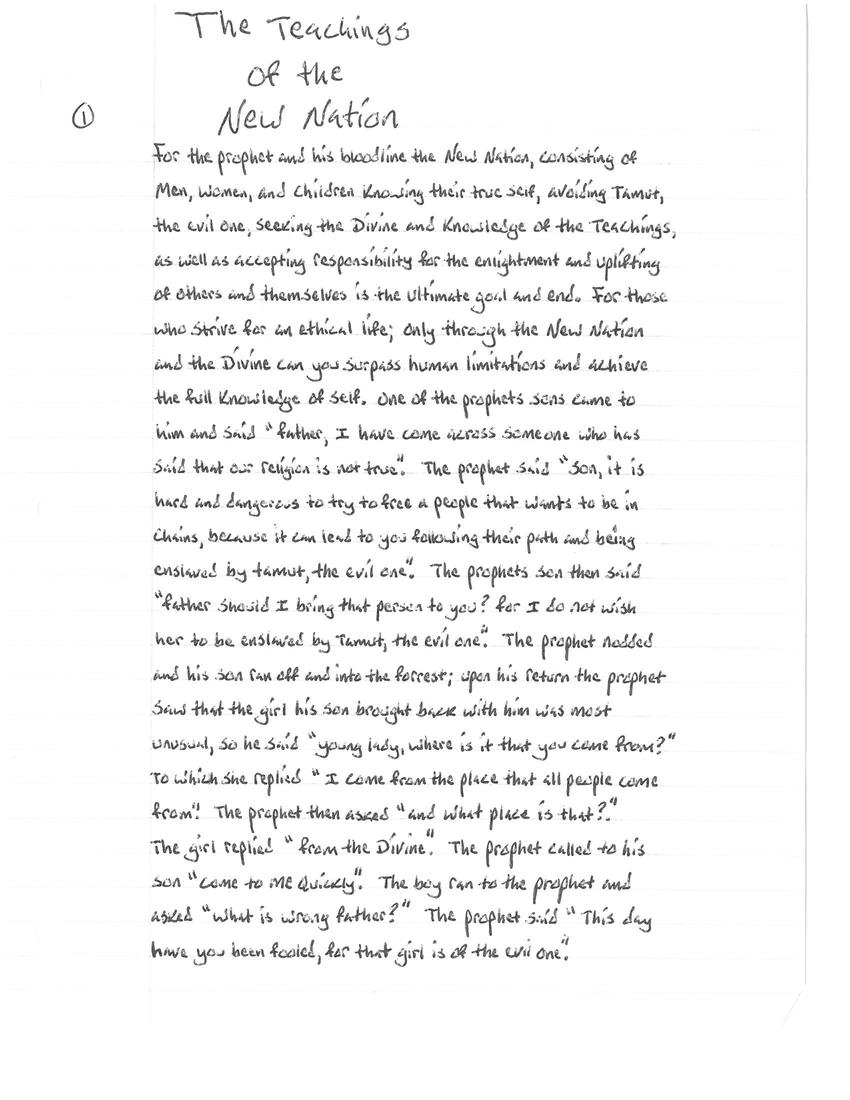 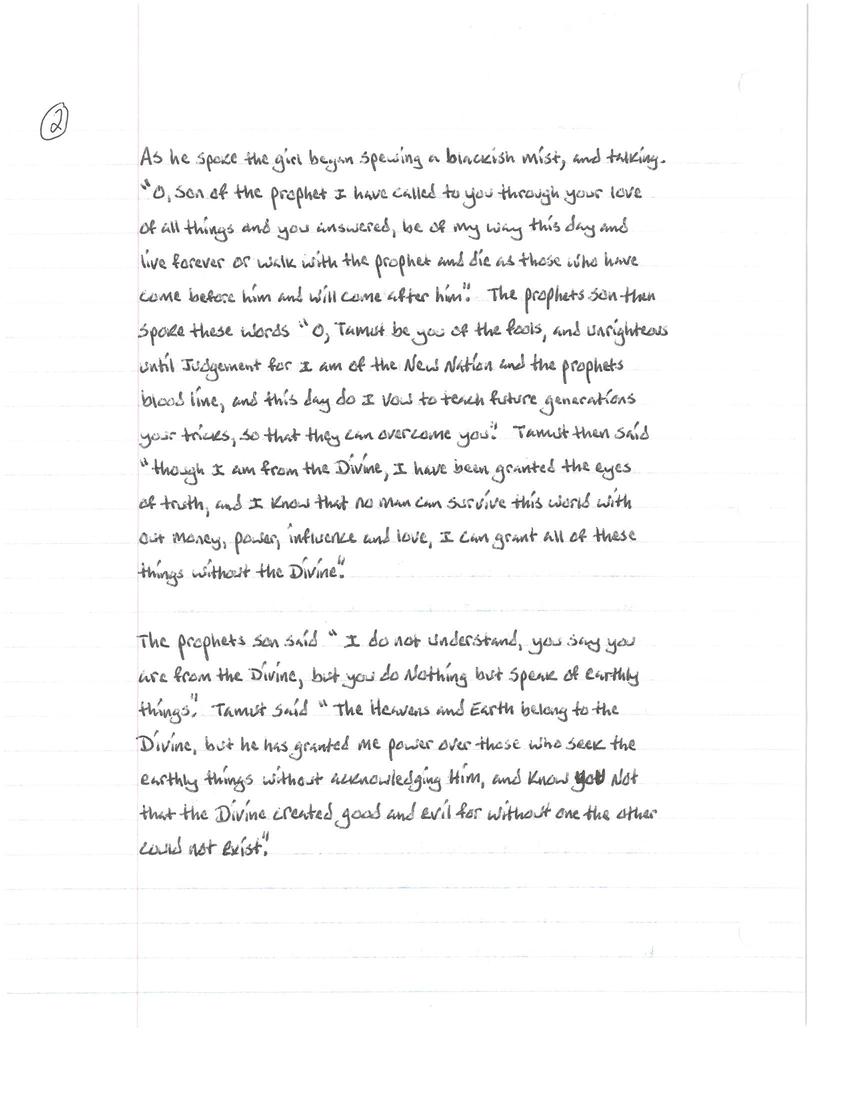 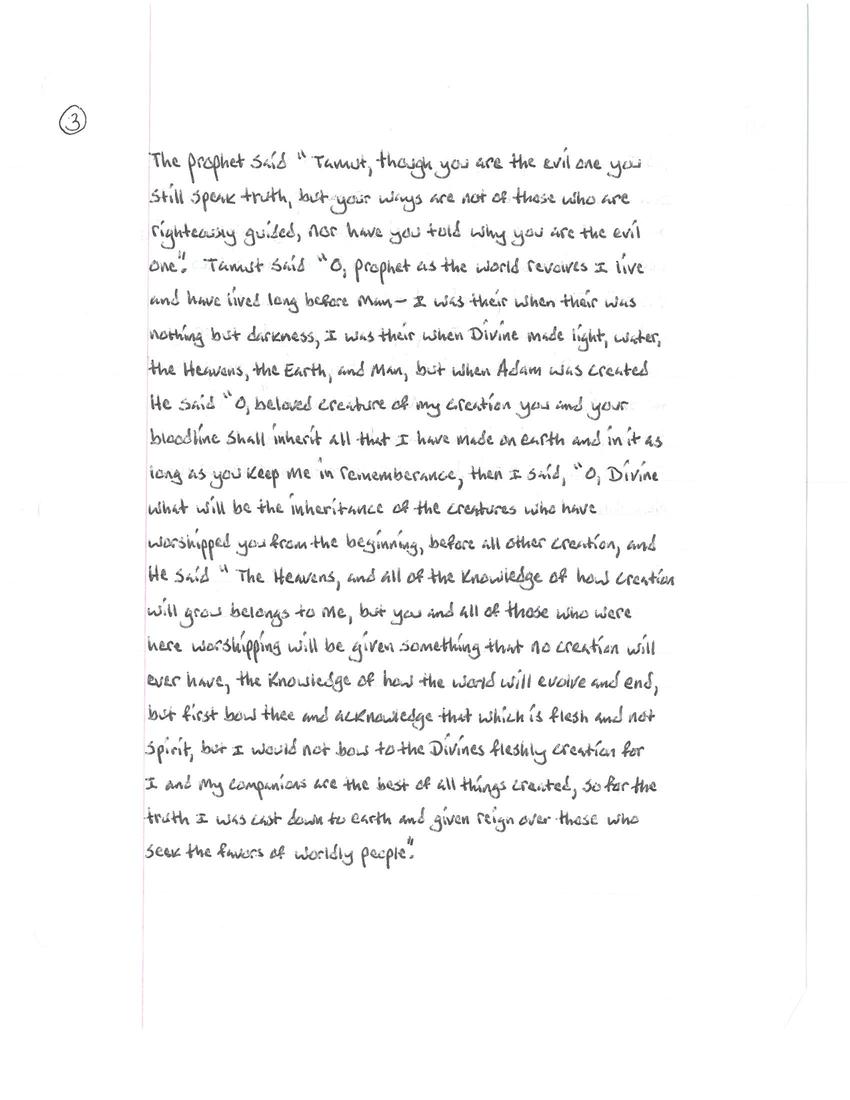 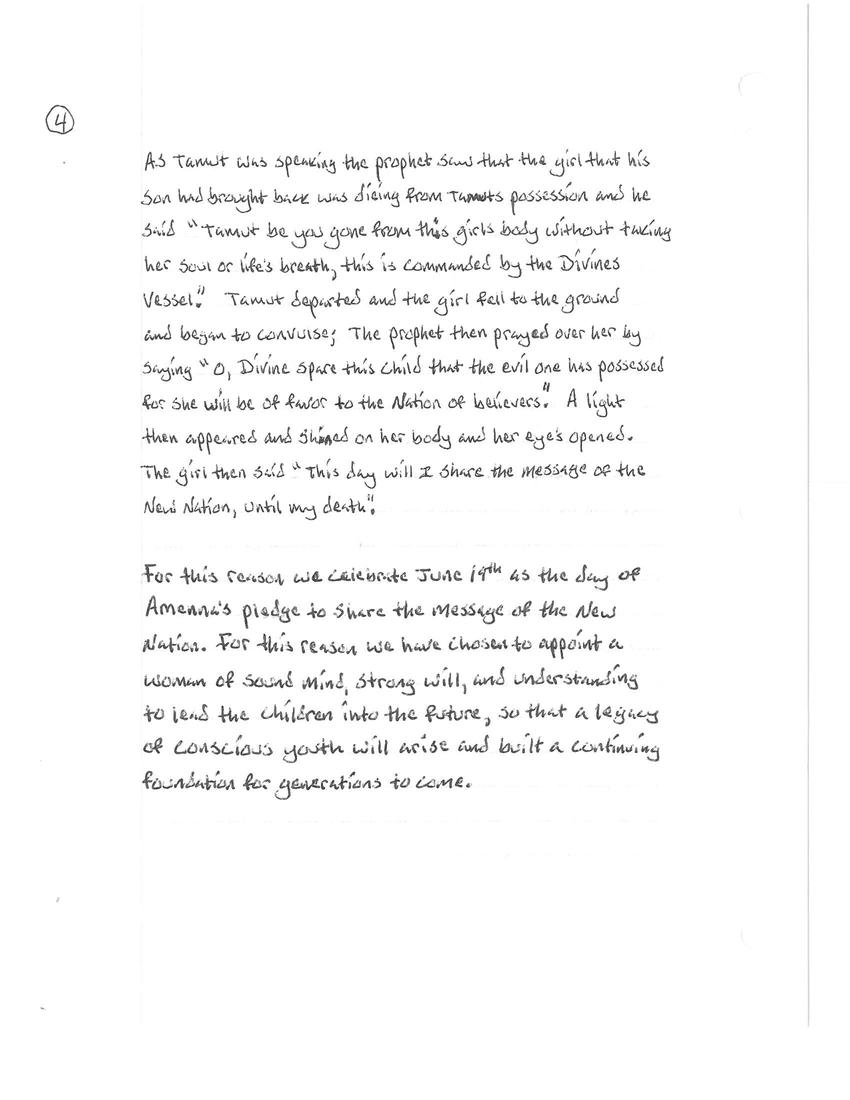 The Teachings of the New Nation

For the prophet and his bloodline the New Nation, consisting of men, women, and children knowing their true self, avoiding Tamut, the evil one, seeking the Divine and Knowledge of the teachings, as well as accepting responsibility for the enlightenment and uplifting of others and themselves is the ultimate goal and end. For those who strive for an ethical life; only through the New Nation and the Divine can you surpass human limitations and achieve the full knowledge of self. One of the prophets sons came to him and said "Father, I have come across someone who has said that our religion is not true."

The prophet said "Son, it is hard and dangerous to try to free a people that want to be in chains, because it can lend to you following in their path and being enslaved by Tamut, the evil one."

The prophets son then said "Father, should I bring that person to you? For I do not wish her to be enslaved by Tamut, the evil one."
The prophet nodded and his son ran off and into the forest; upon his return the prophet saw that the girl his son brought back with him as most unusual, so he said "Young lady, where is it that you come from?"

To which she replied "I come from the place that all people come from!"

The prophet then asked "And what place is that?"

The girl replied "From the Divine."

The prophet called to his son "Come to me quickly."

The boy ran to the prophet and asked "What is wrong father?"

The Prophet said "This day have you been fooled, for that girl is of the evil one."

As he spoke, the girl began spewing a blackish mist, and talking "O, son of the prophet I have called to you through your love of all things and you answered, be of my way this day and live forever or walk with the prophet and die as those who have come before him and will come after him."

The prophet's son then spoke these words "O. Tamut be you of the fools, and unrighteous until judgement for I am of the New Nation and the prophet's bloodline, and this day do I vow to teach future generations your tricks, so that they can overcome you."

Tamut then said "Though I am from the Divine, I have been granted the eyes of truth, and I know that no man can survive this world without money, power, influence and love, I can grant all of these things without the Divine."

The prophet's son said "I do not understand, you say you are from the Divine, but you do nothing but speak of earthly things."

Tamut said "The Heavens and Earth belong to the Divine, but he has granted me power over those who seek the earthly things without acknowledging Him, and know you not that the Divine created good and evil for without one the other could not exist."

Tamut said "O, prophet as the world revolves, I live and have lived long before man - I was there when there was nothing but darkness, I was there when Divine made light, water, the Heavens, the earth and man, but when Adam was created he said "O, beloved creature of my creation, you and your bloodline shall inherit all that I have made on earth and in it as long as you keep me in remembrance, the I said "O, Divine, what will be the inheritance of the creatures who have worshiped you from the beginning, before all other creation, and he said "The Heavens, and all the knowledge of how creation will grow belongs to me, but you and all of those who were here worshiping will be given something tat no creation will ever have, the knowledge of how the world will evolve and end, but first bow thee and acknowledge that which is flesh and not spirit, but I would now bow to the Divine's flesh creation for I and my companions are the best of all things created, so for the truth I was cast down to earth and given reign over those who seek the favors of worldly people."

As Tamut was speaking, the prophet saw that the girl that his son had brought back was dying from Tamut's possession and he said "Tamut be you gone from this girls body without taking her soul or life's breath, this is commanded by the Divine's vessel." Tamut departed and the girl fell to the ground and began to convulse; the prophet then prayed over her by saying "O, Divine spare this child that the evil one has possessed for she will be of favor to the Nation of believers." A light then appeared and shined on her body and her eyes opened.

For this reason we celebrate June 19th as the day of Ammena's pledge to share the message of he New Nation. For this reason we have chosen to appoint a woman of sound mind, strong will, and understanding to lend the children into the future, so that a legacy of conscious youth will arise and built a continuing foundation for generations to come.