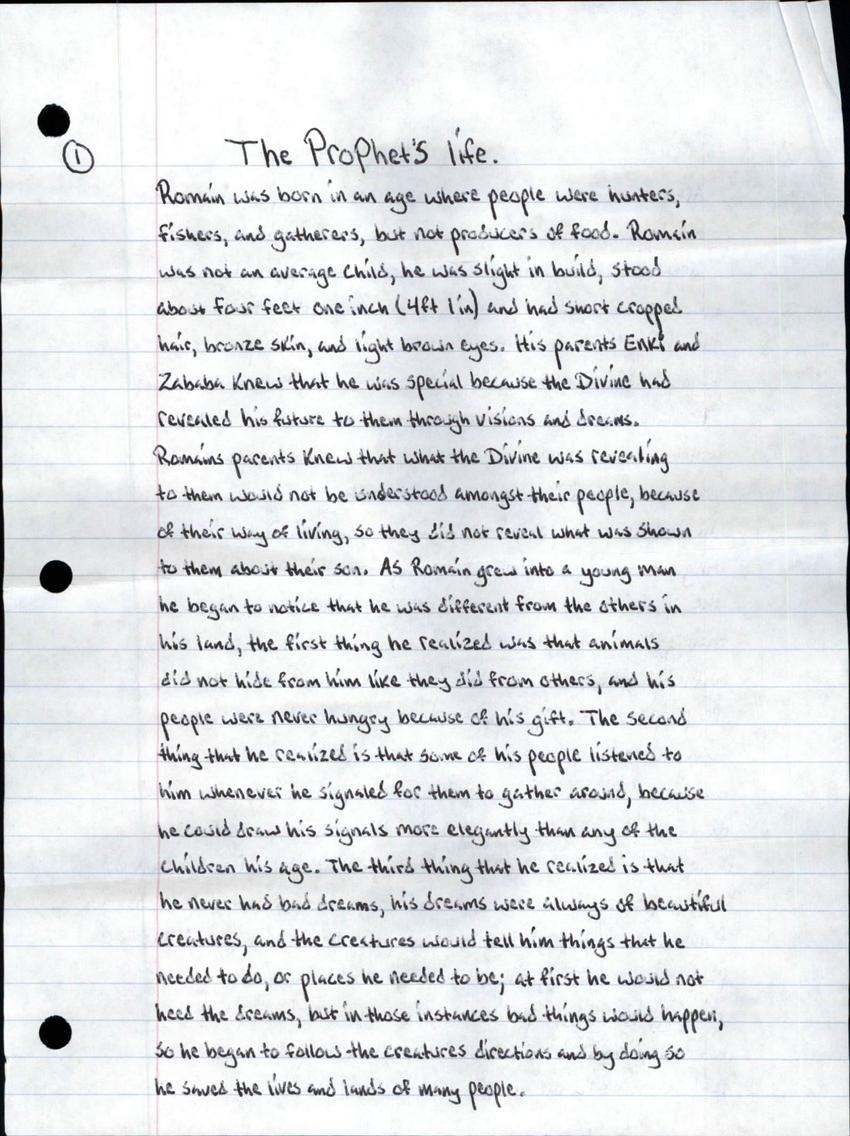 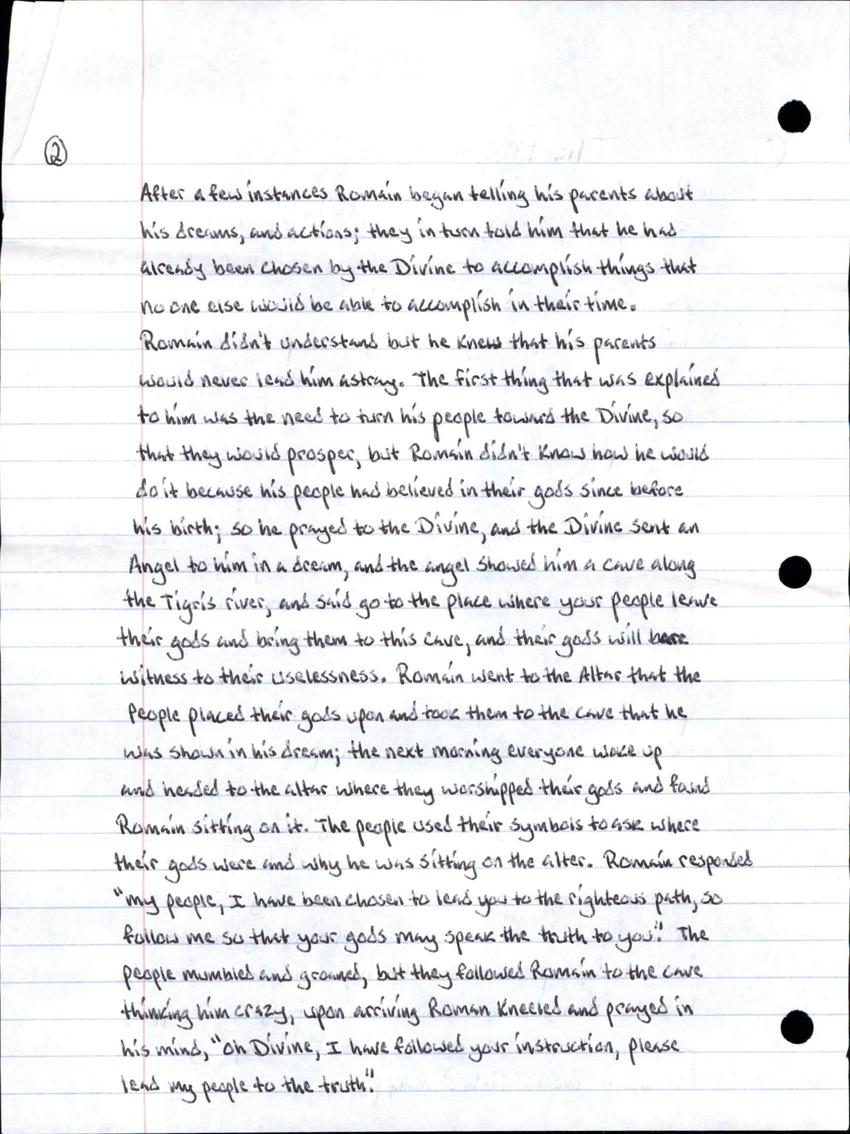 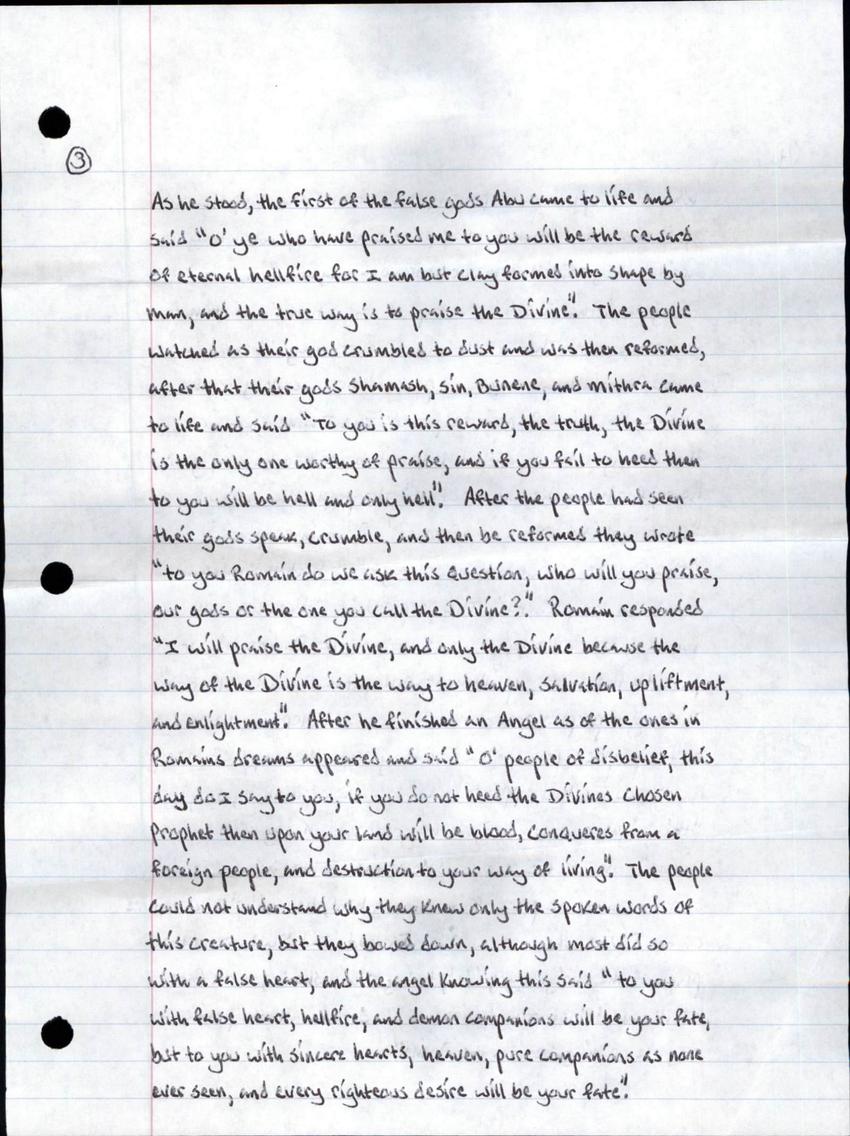 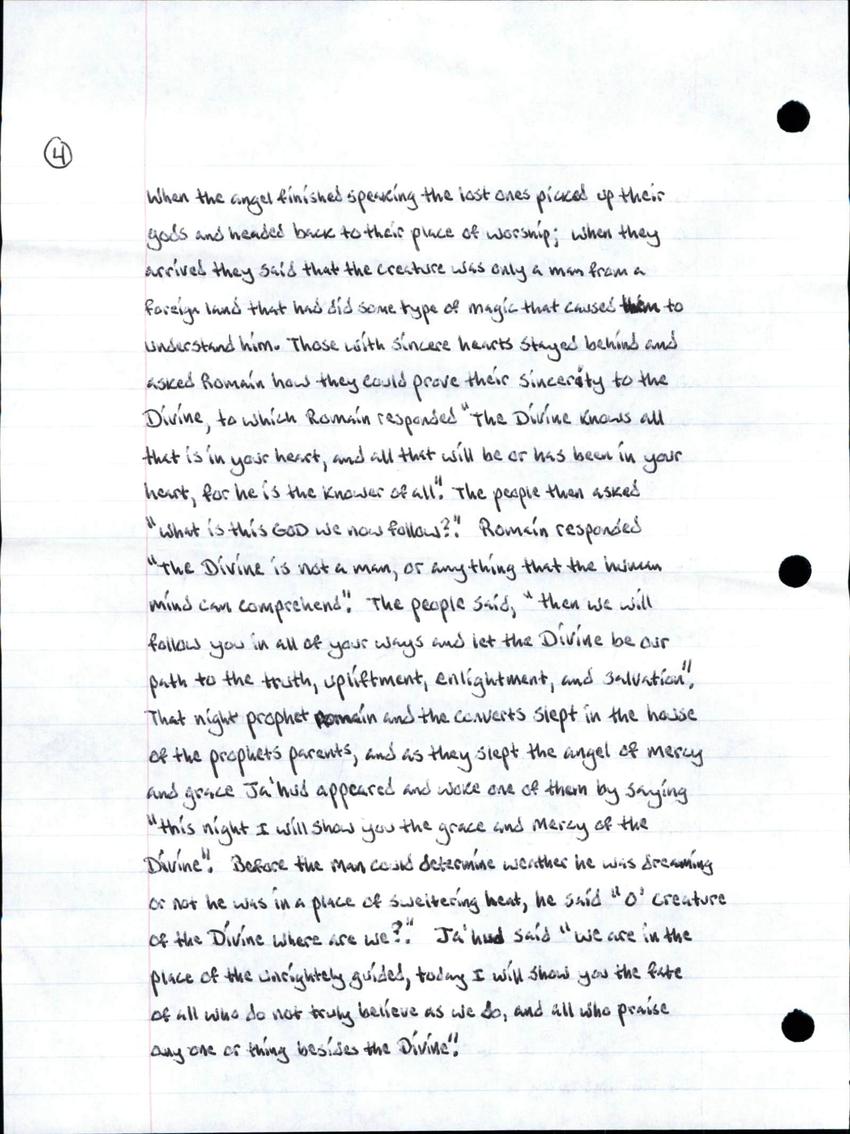 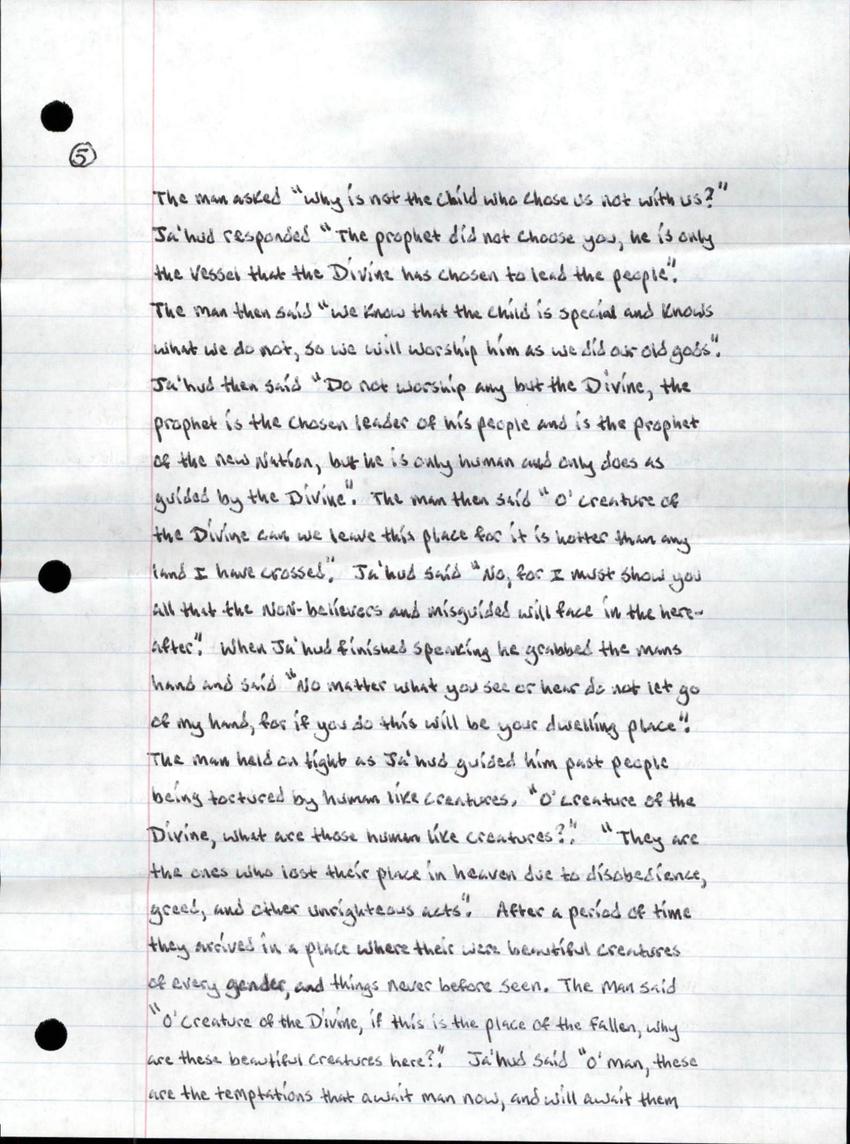 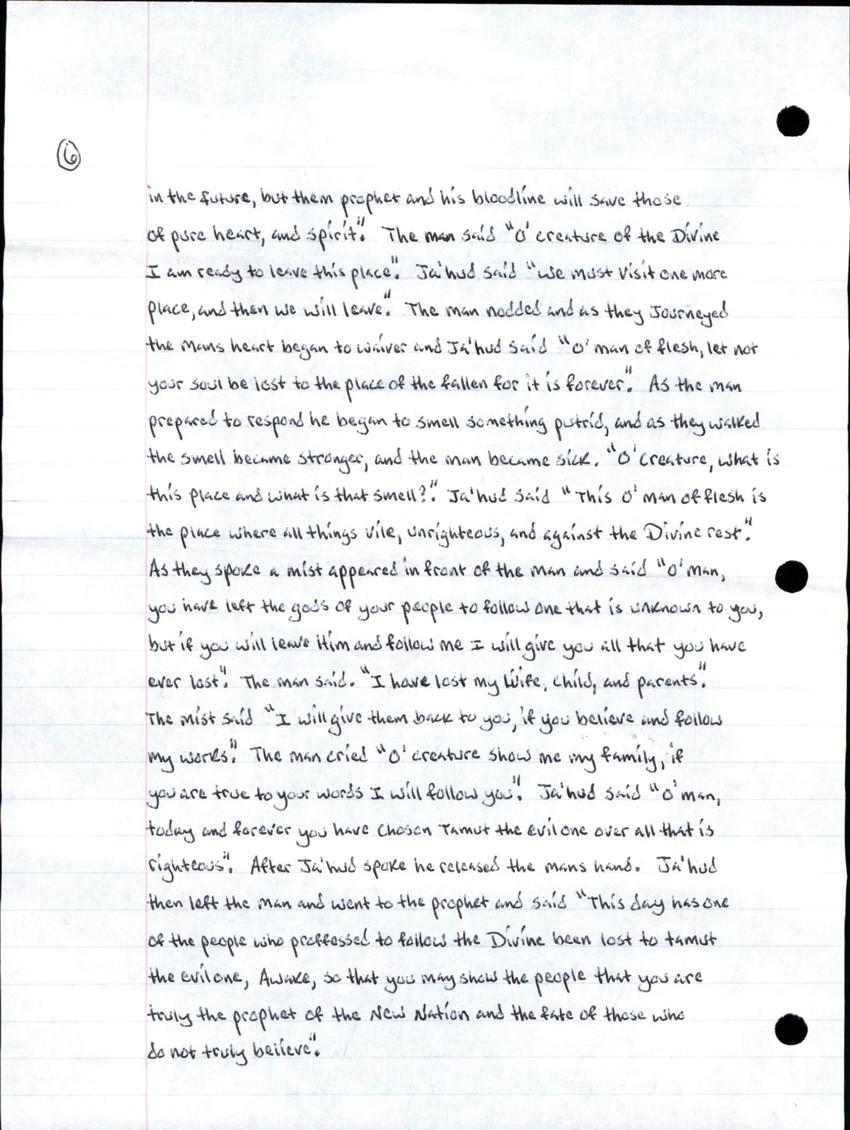 As the prophet grew older the Divine sent various angels to teach the prophet how to be an example for his people; the angels began by taking him to the top of the eastern mountains and showing him how to make and use tools of stone and wood, as well as how to make and control fire. The prophet took those teachings to his people, and as he did the Divine decided that it would be easier if the people had a language that they could speak instead of using signs and symbols. As the angels of the Divine reviewed the language to the prophet, the prophet taught it to his people and they increased in knowledge; instead of living in silence they began to speak, and the Divine knew that it was good. The Divine then revealed to the prophet the knowledge of building reliable shelter to his people, and the prophet began to build buildings to hold food, people, and other things. This brought others into the land of the prophet, and these people trusted in magic, incantations, and rituals that the Divine revealed were falsehood and an affront to him. The prophet was now a young man and knew much, about leading his people, and refused to let others bring forth their destruction. The prophet taught unity, but told his people to always forbid the wrong and join the right; as he taught the message of the new nation the Divine revealed to him that many generations in the future there would come divisions in the one true religion of the divine, they would call themselves sects of denominations, but during that time his bloodline would carry the truth and share it with the world when they were facing the wrath of the Divine, and the path of destruction was near. The people then asked "O' prophet, tell us what divisions will come in the future." The prophet responded, "Instead of following the teachings of unity, peace, enlightenment, upliftment, and salvation, many will teach that their religion is best, that no one will enter heaven unless they are bonded to other than the Divine, they will bring forth denominations, and perform rituals not given to them by the Divine." The people said, "O' prophet, teach us so that we may teach our bloodlines the truth of such matters." The prophet said, "I will teach you, and you may teach your bloodlines, but no one can share the teachings unless guided by the Divine." The people said "O' prophet, we are ready." The prophet said "my people, I have brought you from the worship of many gods to the one true Divine, but as you once worshipped the sun, moon, and many others, so will future generations, they will use signs and symbols without realizing their true meanings, they will say that a man was placed to death and rose again in three days, not knowing that this story was product of the myth of ancient Egyptians belief in a sun god, and the mythical bird called the phoenix.
The phoenix was said to live five hundred years or more, in the heat of the sun fanned by the wings of this bird, the nest would burst into flames, the phoenix would be reduced to ashes, but from these ashes, it would rise again ready to live, die, and be reborn." The people said, "O' prophet teach us more." The prophet said, "There will come a man of my bloodline named Akhenaten, who will try to show his people the true way of one Divine, peace, and unity, but his people will not follow."

Hey big bro this your baby brother Q.
I hope you taking care of yourself and staying out of trouble... We need you to come home and be the big brother you were always suppose to be. Although we can never get back the time lost, it's never to late to be a positive impact. We all still love you and and look forward to seeing you again! I miss you guy! So much has happened and so much has changed. I find myself thinking about you all the time just wondering how much life would be different if you were out. But everything happens for a reason you know? I love you though and can't wait til you get released. I'm 24 now so we can definitely go out and kick it lol But stay encouraged and know your not alone, and your not a failure. Your human and entitled to a second chance... I look forward to seeing you again!