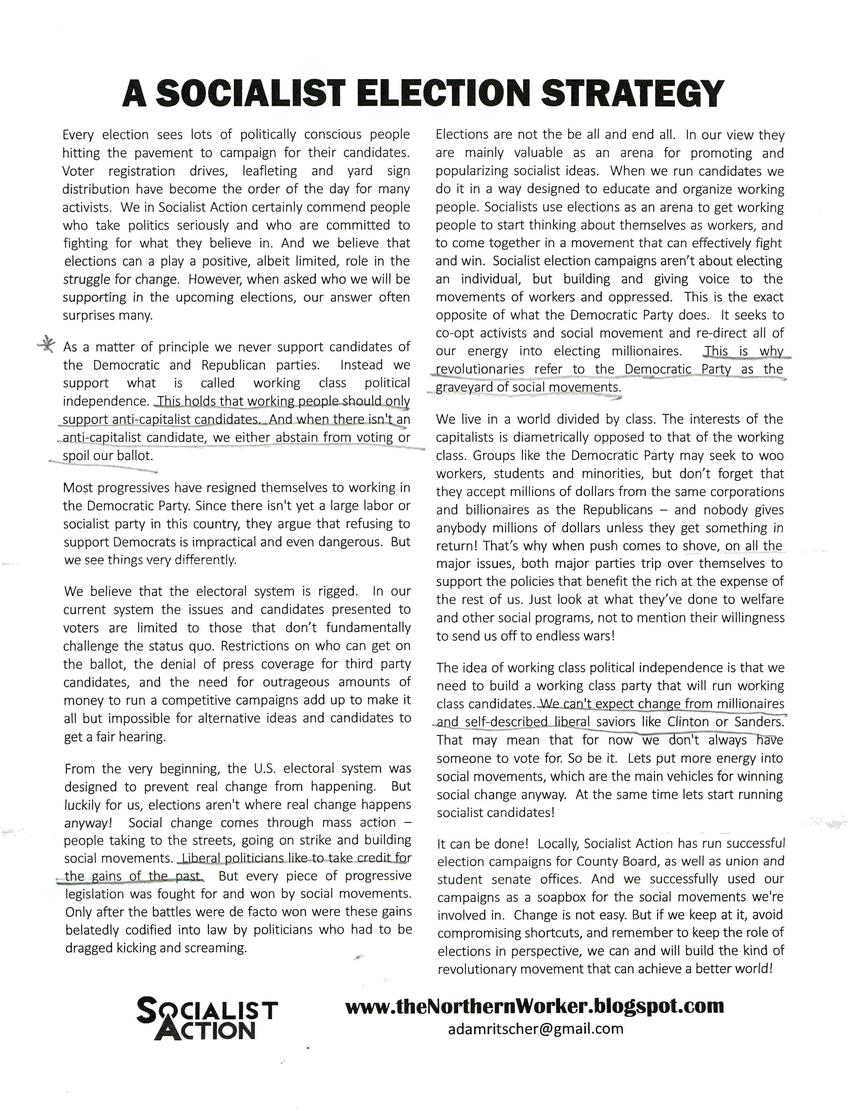 Every election sees lots of politically conscious people hitting the pavement to campaign for their candidates. Voter registration drives, leafleting and yard sign distribution have become the order or the day for many activists, we in Socialist Action certainly commend people who take politics seriously and who are committed to fighting for what they believe in. And we believe that elections can play a positive, albeit limited, role in the struggle for change. However, when asked asked who we will be supporting in the upcoming elections, our answer often surprises many.

Most progressive have resigned themselves to working in Democratic Party. Since there isn't yet a large labor or socialist party in this country, they argue that refusing to support Democrats is impractical and even dangerous. But we see things very differently. We believe that the electoral system is rigged. In our current system the issues and candidates presented to voters are limited to those that don't fundamentally challenge the status quo. Restrictions on who can get on the ballot, the denial of press coverage for third party candidates, and the need for outrageous amounts of money to fun a competitive ideas and candidates to get a fair hearing.

From the very beginning, the U.S. electoral system was designed to prevent real change from happening. But luckily for us, elections aren't were real change happens anyway! Social change comes though mass action- people taking to the stresses, going on strike and building social movements. Liberal politicians like to take credit for the gains of the past. But every piece of progressive legislation was fought for and won by social movements. Only after the battles were de facto won were these gains belatedly codified into law by politicians who had to be dragged kicking screaming.

Elections are not be all and end all. In our view they are mainly valuable as an arena for promoting and popularizing Socialist use elections as an arena to get working people to start thinking about themselves as workers, and to come together in a movement that can effective fight and win. Socialist election campaigns aren't about electing an individual, but building and giving voice to the movements of workers and oppressed. This is the extract opposite of what the Democratic Party does. It seeks to co-opt activists and social movement and re-direct all of our energy into electing millionaires. This is why are revolutionaries refer to the Democratic Party as the graveyard od social movements.

We live in a world divided by class. The interests of the capitalist is diametrically opposed to that of the working class. Groups like the Democratic Party may seek to woo workers, students and minorities, but don't forget that they accept million of dollars from the same corporations and billionaires as the Republican's- and nobody gives anybody millions of dollars unless they get something in return! That's why when push comes to shove, on all the major issues, both major parties trip over themselves to support the policies that benefit the rich at the expense of the rest of us. Just look at what they've don't to welfare ad other social programs, not to mention their willingness to send us off the endless wars!

It can be done! Locally, Socialist Action has run successful election campaign's for Country Board, as well as union and student senate offices. And we successfully used our campaign's as a soapbox for the social movements we're involved in. Change is not easy. But if we keep at it, avoided compromising shortcuts, and remember to keep the role of elections in perspective, we can and will build the kind of revolutionary movement that can achieve a better world!