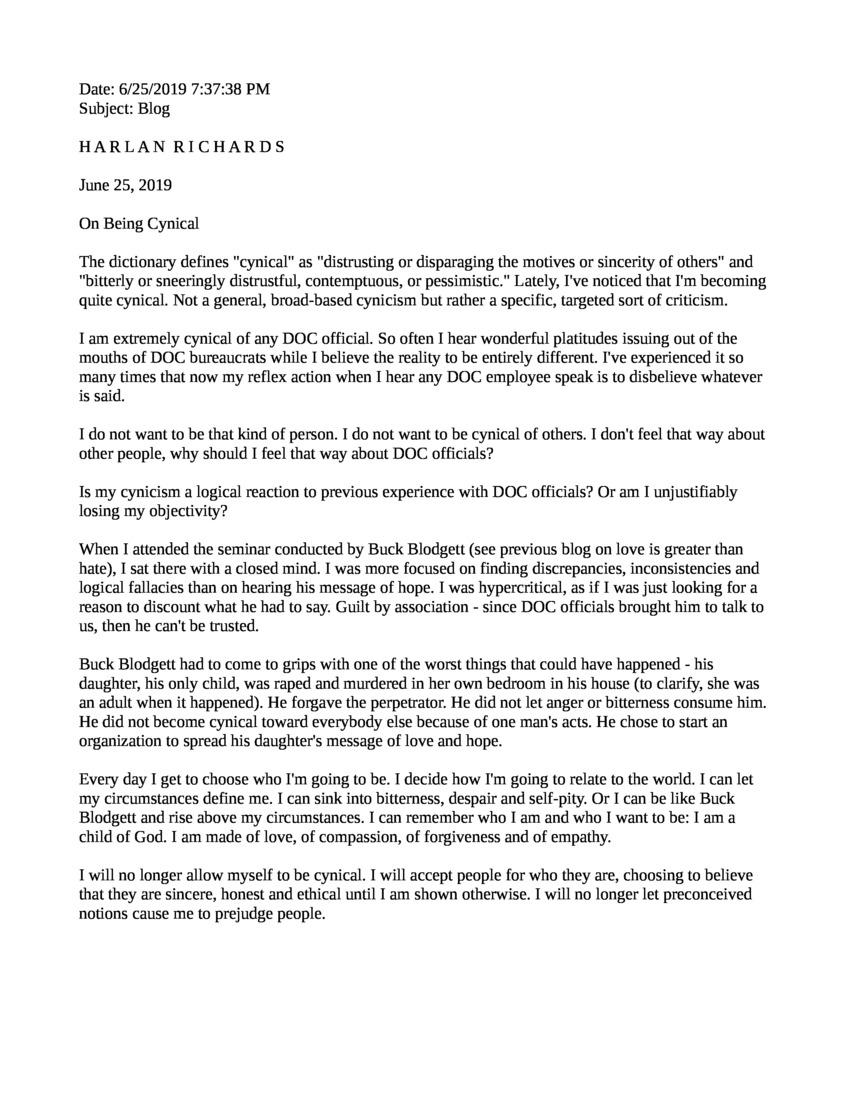 The dictionary defines "cynical" as "distrusting and disparaging the motives or sincerity of others" and "bitterly or sneeringly distrustful, contemptuous, or pessimistic." Lately, I've noticed that I'm becoming quite cynical. Not a general, broad-based cynicism but rather a specific, targeted sort of criticism.

I am extremely cynical of any DOC official. So often I hear wonderful platitudes issuing out of the mouths of DOC bureaucrats while I believe the reality to be entirely different. I've experienced it so many times that my reflex action when I hear any DOC employee speak now is to disbelieve whatever is said.

Is my cynicism a logical reaction to previous experience with DOC officials? Or am I unjustifiably losing my objectivity?

When I attended the seminar conducted by Buck Blodgett (see previous blog on love is greater than hate), I sat there with a closed mind. I was more focused on finding discrepancies, inconsistencies, and logical fallacies than on hearing his message of hope. I was hypocritical, as if I was just looking for a reason to discount what he had to say. Guilt by association—since DOC officials brought him to talk to us, then he can't be trusted.

Buck Blodgett had to come to grips with one of the worst things that could have happened—his daughter, his only child, was raped and murdered in her own bedroom in his house. To clarify, she was an adult when it happened. He forgave the perpetrator. He did not let anger or bitterness consume him. He did not become cynical toward everybody else because of one man's acts. He chose to start an organization to spread his daughter's message of hope and love.

Every day I get to choose who I'm going to be. I decide how I'm going to relate to the world. I can let my circumstances define me. I can sink into bitterness, despair, and self-pity. Or I can be like Buck Blodgett and rise above my circumstances. I can remember who I am and who I want to be: I am a child of God. I am made of love, of compassion, of forgiveness, and of empathy.

I will no longer allow myself to be cynical. I will accept people for who they are, choosing to believe that they are sincere, honest, and ethical until I am shown otherwise. I will no longer let preconceived notions cause me to prejudge people.