Why is Boris Johnson So Eager to Complete Brexit? 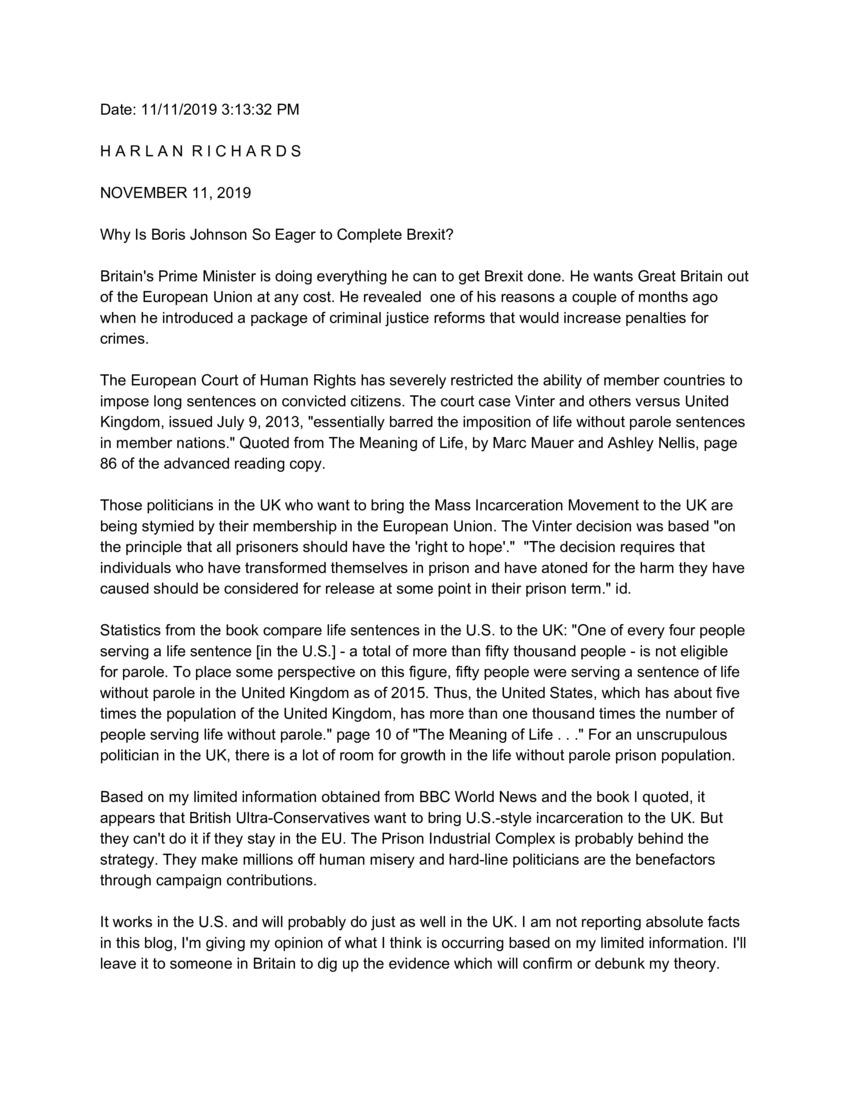 Why is Boris Johnson So Eager To Complete Brexit?

Britain's Prime Minister is doing everything he can to get Brexit done. He wants Great Britain out of the European Union at any cost. He revealed one of this reasons a couple of months ago when he introduced a package of criminal justice reforms that would increase penalties for crimes.

The European Court of Human Rights has severely restricted the ability of member countries to impose long sentences on convicted citizens. The court case Vinter and Others verses United Kingdom, issued July 9, 2013, "essentially barred the imposition of life without parole sentences in member nations." Quoted from The Meaning of Life by Marc Mauer and Ashley Nellis, page 86 of the advanced reader copy.

Those politicians in the UK who want to bring the Mass Incarceration Movement to the UK are being stymied by their membership in the European Union. The Vinter decision was based "on the principle that all prisoners should have the 'right to hope.'" "The decision requires that individuals who have transformed themselves in prison and have atoned for the harm they have caused should be considered for release at some point in their prison term." id

Statistics from the book compare life sentences in the US to the UK: "One of every four people serving a life sentence [in the US]—a total of more than fifty thousand people—is not eligible for parole. To place some perspective on this figure, fifty people were serving a sentence of life without parole in the United Kingdoms as of 2015. Thus, the United States, which has about five times the population of the United Kingdom, has more than one thousand times the number of people serving life without parole." page 10 of The Meaning of Life.

For an unscrupulous politician in the UK, there is a lot of room for growth in the life without parole prison population.

Based on my limited information obtained from BBC World News and the book I quoted, it appears that the British ultra-conservatives want to bring US style incarceration to the UK. But they can't do it if they stay in the EU. The prison industrial complex is probably behind the strategy. They make millions off human misery and hardline politicians are the benefactors through campaign contributions.

It works in the US and will probably do just as well in the UK. I am not reporting absolute facts in this blog. I'm giving my opinion of what I think it occurring behind on my limited information. I'll leave it to someone in Britain to dig up the evidence which will confirm or debunk my theory.