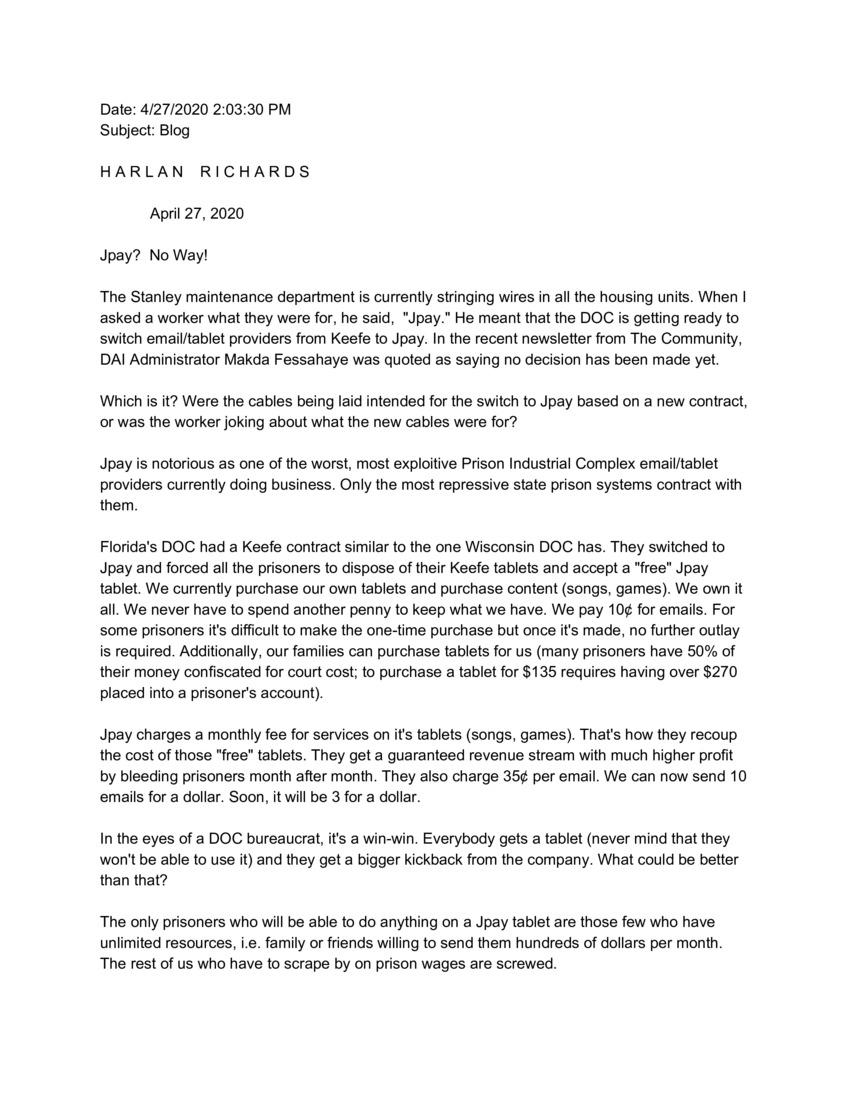 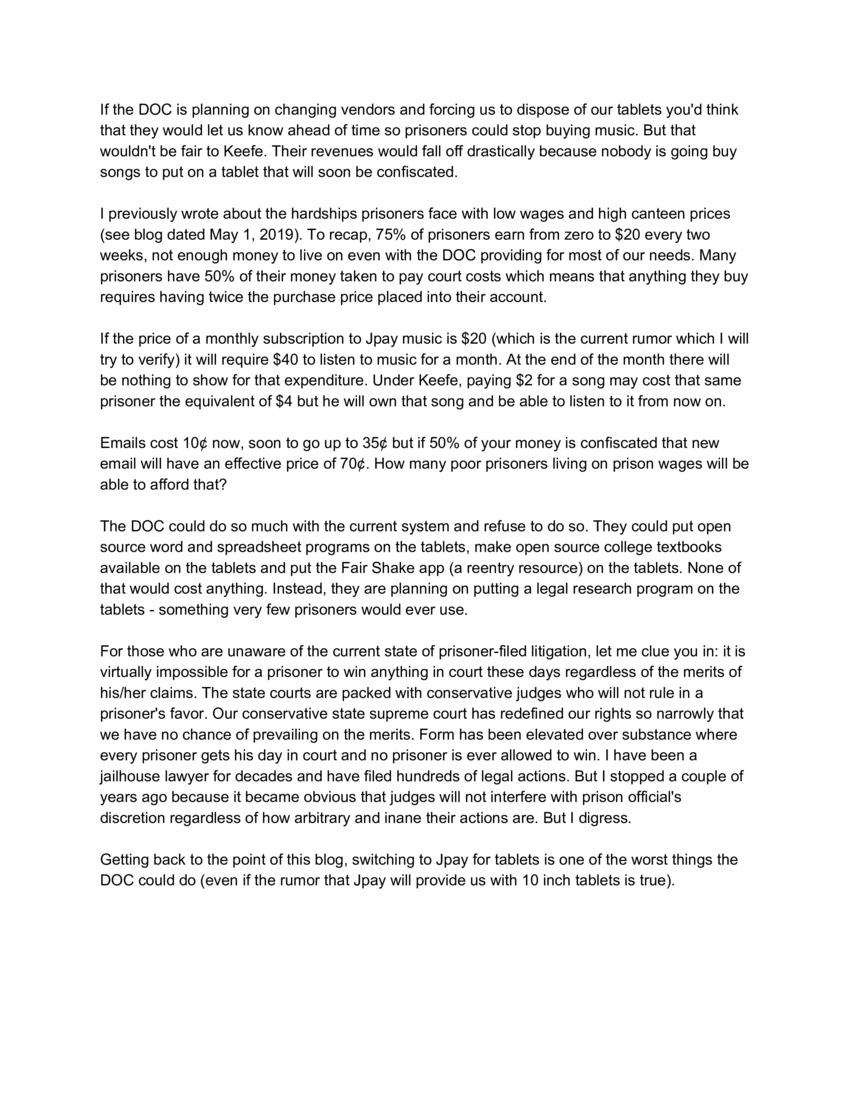 The Stanley maintenance department is currently stringing wires in all the housing units. When I asked a worker what they were for, he said, "Jpay." He meant that the DOC is getting ready to switch email/tablet providers were Keefe to Jpay. In the recent newsletter from The Community, DAI Administrator Makda Fessahaye was quoted as saying no decision has been made yet.

Which is it? Were the cables being laid intended for the switch to Jpay based on a new contract, or was the worker joking about what the new cables were for?

Jpay is notorious as one of the worst, most exploitative Prison Industrial Complex email/tablet providers currently doing business. Only the most repressive state prison systems contract with them.

Florida's DOC had a Keefe contract similar to the one Wisconsin DOC has. They switched to Jpay and forced all the prisoners to dispose of their Keefe tablets and accept a "free" Jpay tablet. We currently purchase our own tablets and purchase content (songs, games). We own it all. We never have to spend another penny to keep what we have. We pay 10 cents for emails. For some prisoners it's difficult to make the one one-time purchase, but once it's made, no further outlay is required.

Additionally, our families can purchase tablets for us. Many prisoners have 50% of their money confiscated for court cost. To purchase a tablet for $135 requires having over $270 placed into a prisoner's account.

Jpay charges a monthly fee for services on its tablets (songs, games). That's how they recoup the cost of those "free" tablets. They get a guaranteed revenue stream with much higher profit by bleeding prisoners month after month. They also charge 35 cents per email. We can now send ten emails for a dollar. Soon, it will be three for a dollar.

In the eyes of a DOC bureaucrat, it's a win-win. Everybody gets a tablet (never mind that they won't be able to use it), and they get a bigger kickback from the company. What could be better than that?

The only prisoners who will be able to do anything on a Jpay tablet are those few who have unlimited resources (i.e. family or friends willing to send them hundreds of dollars per month). The rest of us who have to scrape by on prison wages are screwed.

If the DOC is planning on changing vendors and forcing us to dispose of our tablets you'd think that they would let us know ahead of time so prisoners could stop buying music. But that wouldn't be fair to Keefe. Their revenues would fall off drastically because nobody is going to buy songs to put on a tablet that will soon be confiscated.

I previously wrote about the hardships prisoners face with low wages and high canteen prices (see blog dated May 1, 2019). To recap, 75% of prisoners earn from zero to $20 every two weeks.

Not enough money to live on even with the DOC providing for most of our needs. Many prisoners have 50% of their money taken to pay court costs which means that anything they buy requires having twice the purchase price placed into their account.

If the price of a monthly subscription to Jpay music is $20 (which is the current rumor which I will try to verify), it will require $40 to listen to music for a month. At the end of the month there will be nothing to show for that expenditure. Under Keefe, paying $2 for a song may cost that same prisoner the equivalent of $4, but he will own that song and be able to listen to it from now on.

Emails cost 10 cents now, soon to go up to 35 cents. But if 50% of your money is confiscated that new email will have an effective price of 70 cents. How many poor prisoners living on prisoner wages will be able to afford that?

The DOC could do so much with the current system and refuse to do so. They could put open source word and spreadsheet programs on the tablets, make open source college textbooks available on the tablets, and put the Fair Shake app (a reentry resource) on the tablets. None of that would cost anything. Instead, they are planning on putting a legal research program on the tables - something very few prisoners would ever use.

For those who are unaware of the current state of prisoner-filed litigation, let me clue you in: it is virtually impossible for a prisoner to win anything in court these days, regardless of the merits of his/her claims.

The state courts are packed with conservative judges who will not rule in a prisoner's favor. Our conservative state supreme court has redefined our rights so narrowly that we have no chance of prevailing on the merits. Form has been elevated over substance where every prisoner gets his day in court and no prisoner is ever allowed to win.

I have been a jailhouse lawyer for decades and have filed hundreds of legal actions. But I have stopped a couple of years ago because it became obvious that judges will not interfere with prison official's discretion, regardless of how arbitrary and inane their actions are. But I digress.

Getting back to the point of this blog post, switching to Jpay for tablets is one of the worst things the DOC could do. Even if the rumor that Jpay will provide us with 10 inch tablets is true.