How About That Presidential Debate? 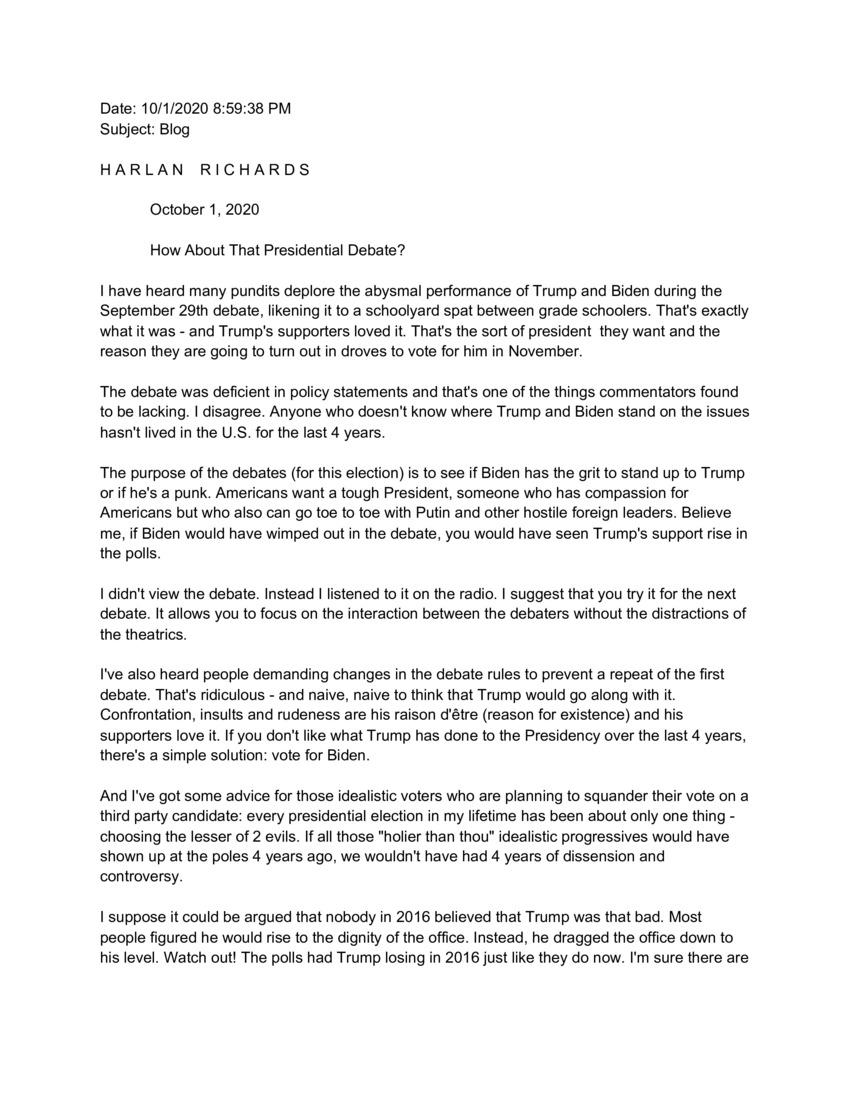 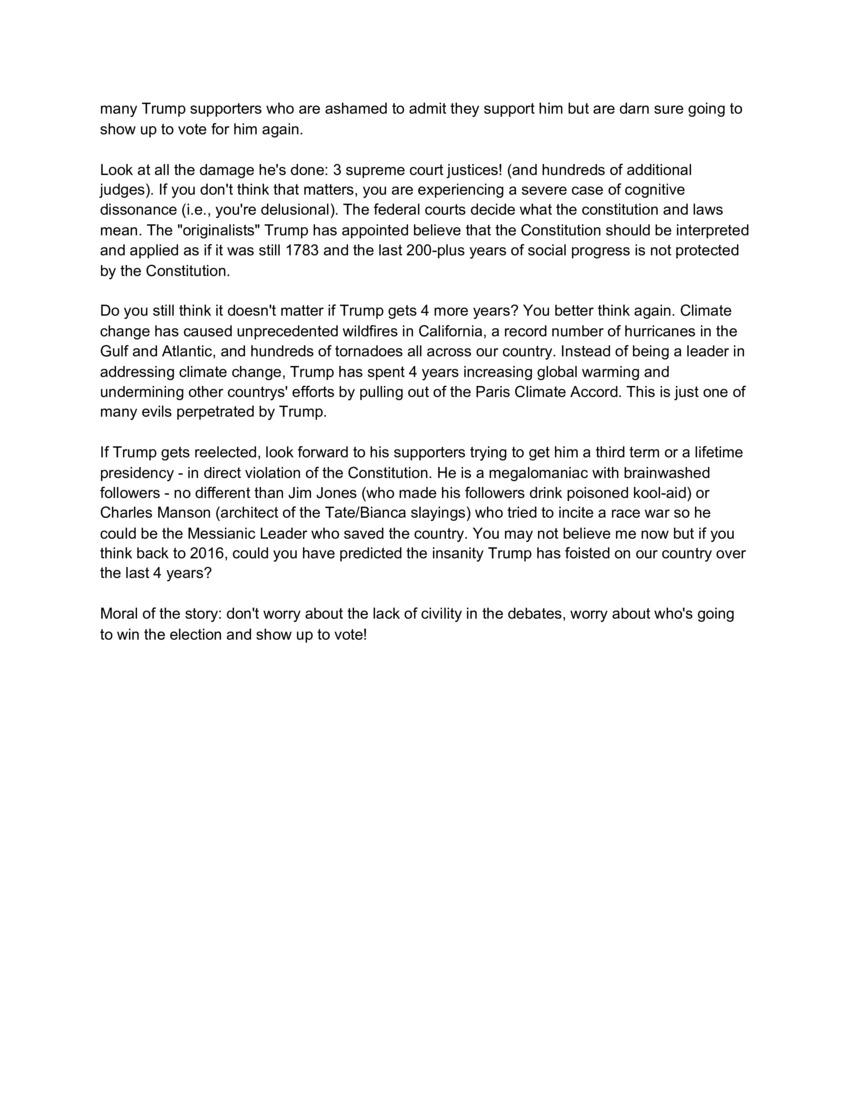 How About That Presidential Debate?

I have heard many pundits deplore the abysmal performance of Trump and Biden during the September 29th debate, likening it to a schoolyard spat between grade schoolers. That's exactly what it was - and Trump's supporters loved it. That's the sort of president they want and the reason they are going to turn out in droves to vote for him in November.

The debate was deficient in policy statements and that's one of the things commentators found to be lacking. I disagree. Anyone who doesn't know where Trump and Biden stand on the issues hasn't lived in the U.S. for the last 4 years.

The purpose of the debates (for this election) is to see if Biden has the grit to stand up to Trump or if he's a punk. Americans want a tough President, someone who has compassion for Americans but who also can go toe to toe with Putin and other hostile foreign leaders. Believe me, if Biden would have wimped out in the debate, you would have seen Trump's support rise in the polls.

I didn't view the debate. Instead I listened to it on the radio. I suggest that you try it for the next debate. It allows you to focus on the interaction between the debaters without the distractions of the theatrics.

I've also heard people demanding changes in the debate rules to prevent a repeat of the first debate. That's ridiculous - and naive, naive to think that Trump would go along with it. Confrontation, insults and rudeness are his raison d'etre (reason for existence) and his supporters love it. If you don't like what Trump has done to the Presidency over the last 4 years, there's a simple solution: vote for Biden.

And I've got some advice for those idealistic voters who are planning to squander their vote on a third party candidate: every presidential election in my lifetime has been about only one thing - choosing the lesser of 2 evils. If all those "holier than thou" idealistic progressives would have shown up at the poles 4 years ago, we wouldn't have had 4 years of dissension and controversy.

I suppose it could be argued that nobody in 2016 believed that Trump was that bad. Most people figured he would rise to the dignity of the office. Instead, he dragged the office down to his level. Watch out! The polls had Trump losing in 2016 just like they do now. I'm sure there are many Trump supporters who are ashamed to admit they support him but are darn sure going to show up to vote for him again.

Look at all the damage he's done: 3 supreme court justices! (and hundreds of additional judges). If you don't think that matters, you are experiencing a severe case of cognitive dissonance (i.e., you're delusional). The federal courts decide what the constitution and laws mean. The "originalists" Trump has appointed believe that the Constitution should be interpreted and applied as if it was still 1783 and the last 200-plus years of social progress is not protected by the Constitution.

Do you still think it doesn't matter if Trump gets 4 more years? You better think again. Climate change has caused unprecedented wildfires in California, a record number of hurricanes in the Gulf and Atlantic, and hundreds of tornadoes all across our country. Instead of being a leader in addressing climate change, Trump has spent 4 years increasing global warming and undermining other countrys' efforts by pulling out of the Paris Climate Accord. This is just one of many evils perpetrated by Trump.

If Trump gets reelected, look forward to his supporters trying to get him a third term or a lifetime presidency - in direct violation of the Constitution. He is a megalomaniac with brainwashed followers - no different than Jim Jones (who made his followers drink poisoned kool-aid) or Charles Manson (architect of the Tate/Bianca slayings) who tried to incite a race war so he could be the Messianic Leader who saved the country. You may not believe me now but if you think back to 2016, could you have predicted the insanity Trump has foisted on our country over the last 4 years?

Moral of the story: don't worry about the lack of civility in the debates, worry about who's going to win the election and show up to vote!

Thanks for writing! I finished the transcription for your post. Agreed, go vote!