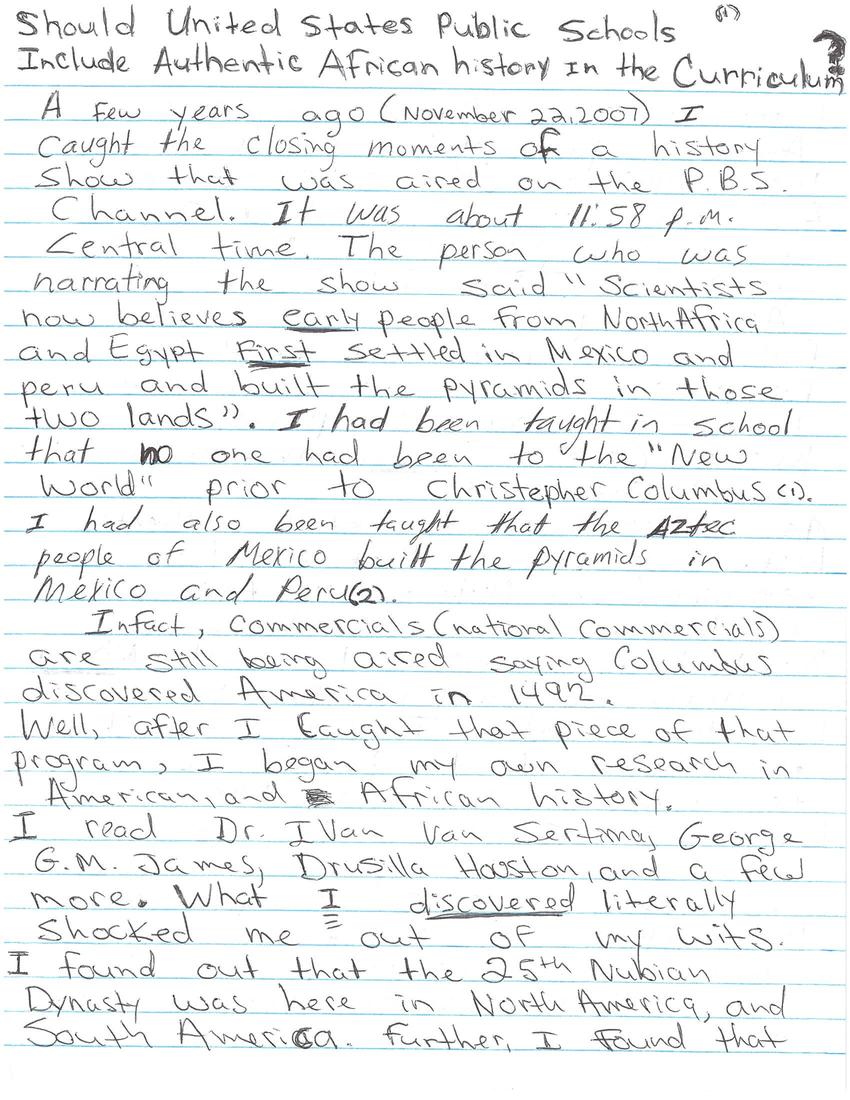 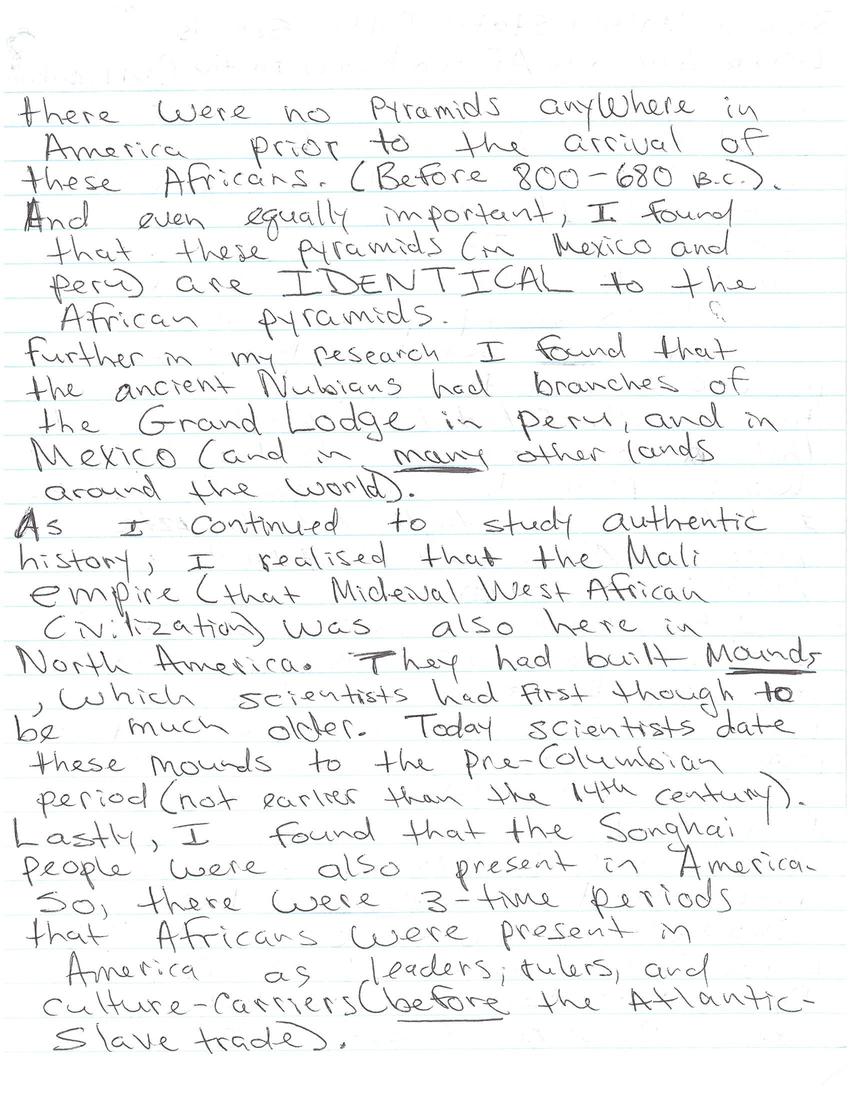 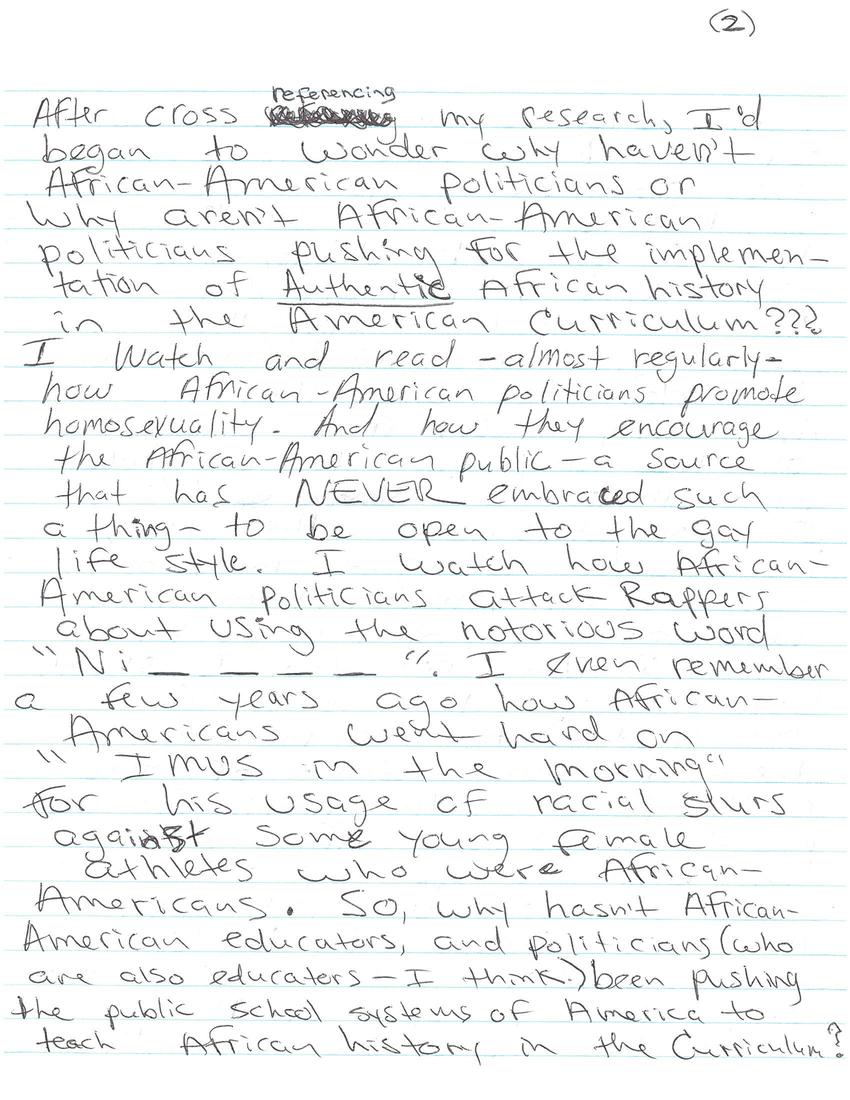 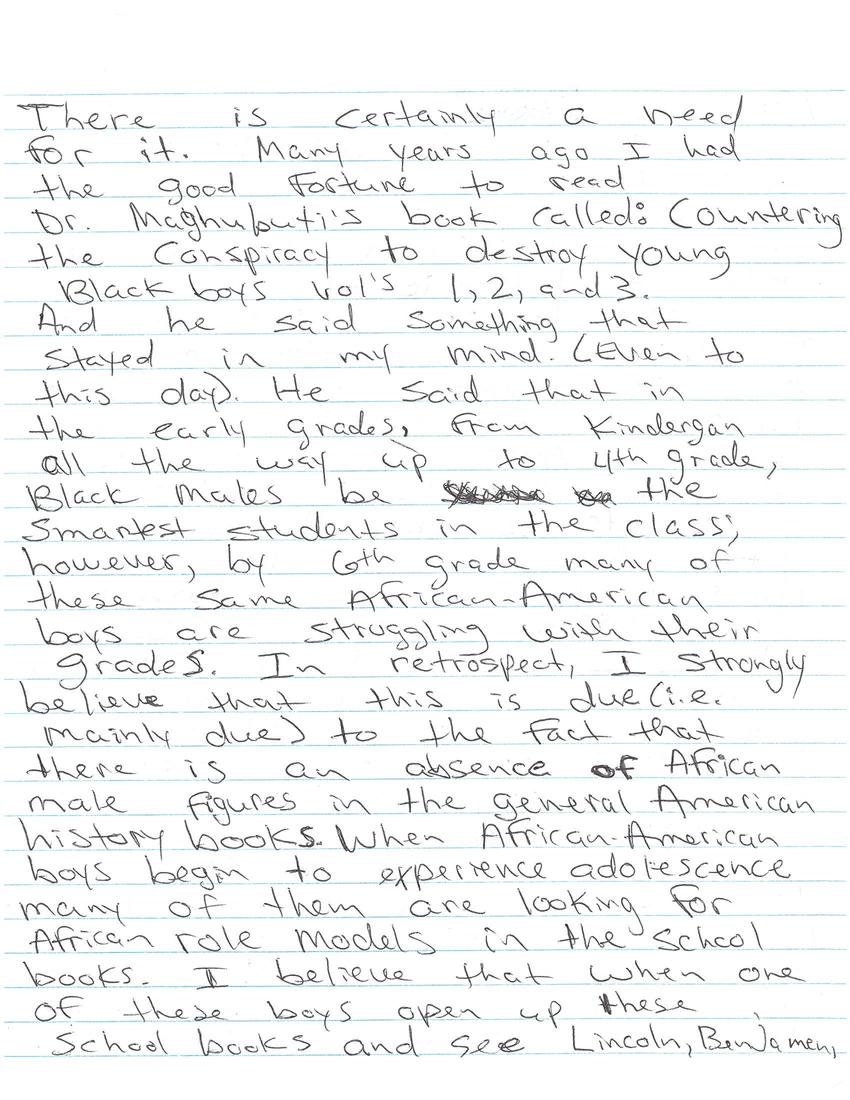 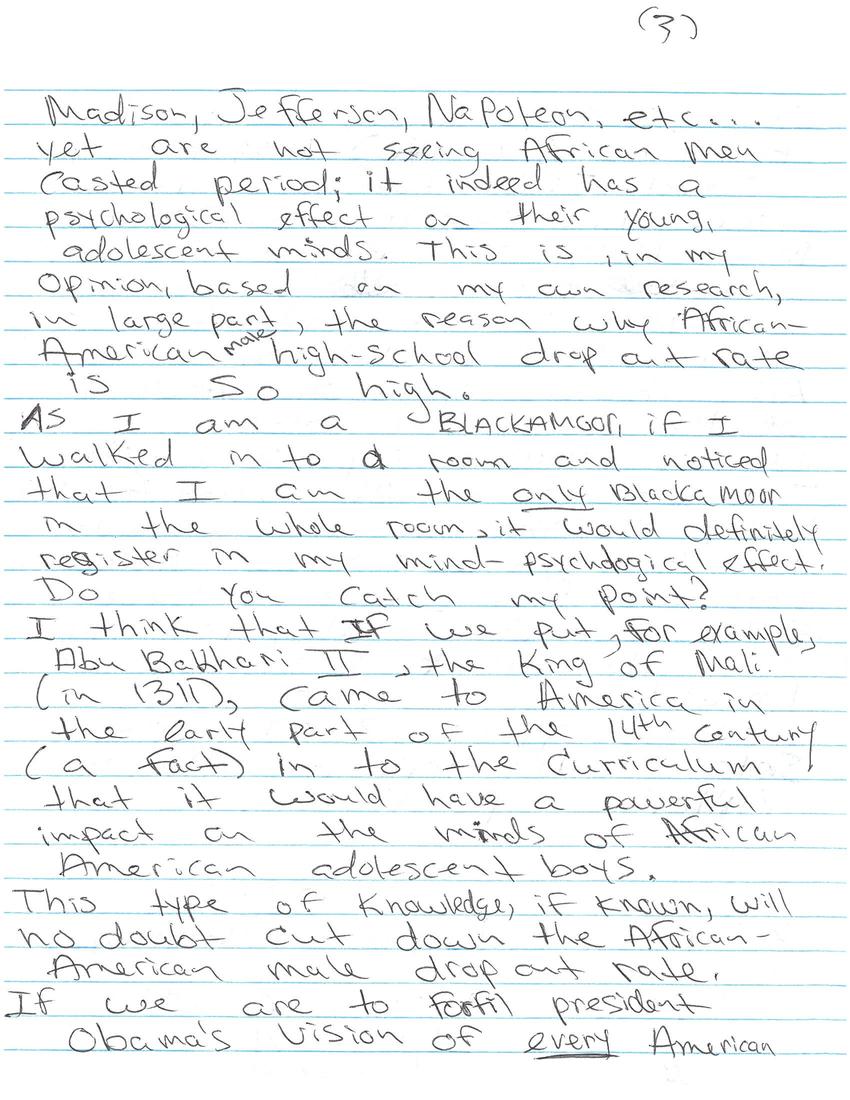 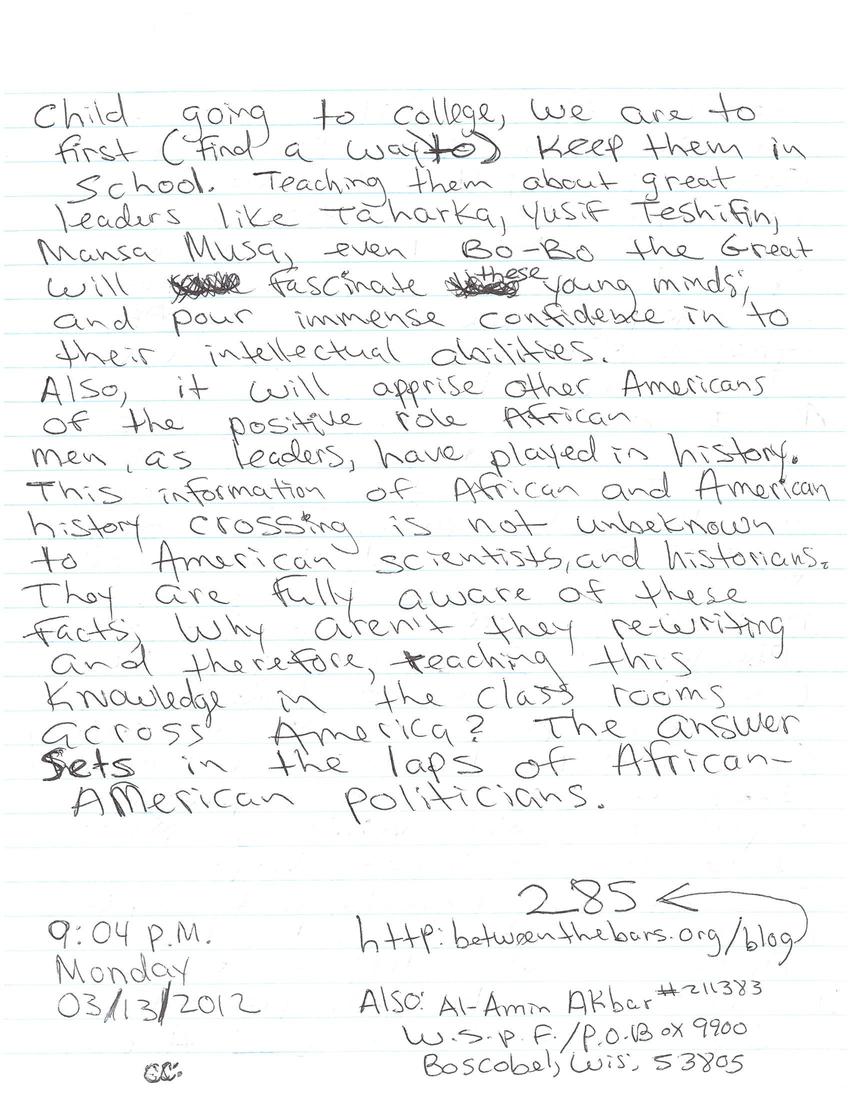 A few years ago (November 22, 2007) I caught the closing moments of a history show that was aired on the P.B.S channel. It was about 11:58pm central time. The person who was narrating the show said "Scientist now believes early people from north Africa and Egypt first settled in Mexico and Peru and built the pyramids in those two lands". I had been taught in school that no one had been to the "New World" prior to Christopher Columbus(1). I had also been taught that the Aztec people of Mexico built the pyramids in Mexico and Peru (2).

Well, after I caught that piece of that program, I began my own research in American and African history.

I read Dr Ivan Van Sertima, George G.M. James, Drusilla Houston, and a few more. What I discovered literally shocked me out of my wits. I found out that the 25th Nubian dynasty was here in North America, and South America. Further, I found that there were no pyramids anywhere in America prior to the arrival of these Africans. (Before 800-680 B>C). And even equally important, I found that these pyramids (M Mexico and Peru) are IDENTICAL to the African pyramids.

Further in my research I found that the ancient Nubians had branches of the Grand Lidge in Peru, and in Mexico (and in many other lands around the world).

As I continued to study authentic history, I realised that the Mali empire (that Mideival West African Civilisation) was also here in North America. They had built mounds which scientists had first though to be much older. Today scientists date these mounds to the pre-columbian period (not earlier than the 14th century). Lastly, I found that the Songhai people were also present in America. So, there were 3-time periods that Africans were present in America as leaders, rulers, and culture-carriers (before the Atlantic-Slave Trade.

There is certainly a need for it. Many years ago I had the good fortune to read Dr maghubuti's book called: countering the conspiracy to destroy young Black boys vol's 1,2, and 3. And he said something that stayed in my mind. (Even to this day). He said that in the early grades, from kindergan all the way up to 4th grade, Black Males be the smartest students in the class; however, by 6th grade many of these same African-American boys are struggling with their grades. In retrospect, I strongly believe that this is due 9i.e. mainly due) to the fact that there is an absense of African male figures in the general American history books. When African-American boys begin to experience adolescence many of them are looking for African role models in the school books. I believe that when one of these boys open up these school books and see lincoln, Benjamen, Madison, Jefferson, Napolean, etc. Yet are not seeing African men casted period; it indeed has a psychological effect on theor young, adolescent minds. This is, in my opinion, based on my own research, in large part, the reason why African-american male high-school drop out rate is so high.

As I am a Blackamoor, if I walked into a room and noticed that I am the only Blackamoor in the whole room, it would definitely register in my mind- psychological effect.do you catch my point? I think that if we put, for example, Abu Bahhari 11, the King of Mali. (in 1311), came to america in the early part of the 14th century (a fact) in to the curriculum that it would have a powerful impact on the minds of African American adolescent boys.

This type of knowledge, if known, will no doubt cut down the African-American male drop out rate. If we are to forfil President Obama's vision of every American child going to college, we are to first (find a way to) keep them in school. Teaching them about great leaders like Taharka, Yusif Teshifin, Mansa Musa, even bo-bo the Great will fascinate these young minds; and pour immense confidence in to their intellectual abilities.

Also, it will apprise other Americans of the positive role african men, as leaders, have played in history. This information of African and american history crossing is not unbeknown to american scientists, and historians. They are fully aware of these facts; why aren't they re-writing and therefore, teaching this knowledge in the class rooms across America? The answer sets in the laps of African-American politicians.