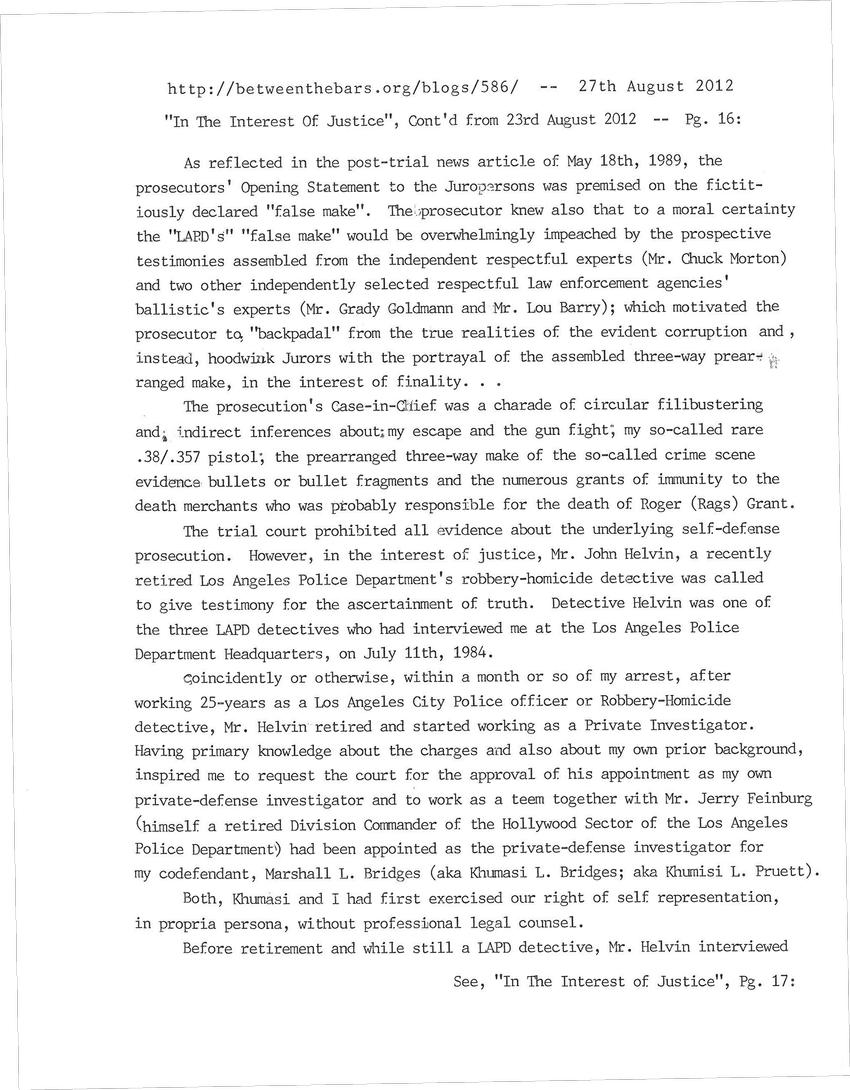 As reflected in the post-trial news article of May 18th, 1989, the prosecutors' Opening Statment to the Juropersons was premised on the flictiously declared "false make". The prosecutor knew also that to a moral certianty the "LARD'S" "false make" would be overwhelmingly impeached by the prospective testimonies assembled from the independent respectful experts (Mr Chuck Morton) and two other independently selected respectful law enforcement agencies' ballistic's experts (Mr Grady Goldman and Mr Lou Barry); which motivated the prosecutor to "backpadal" from the true realities of the evidnt corruption and, instead, hoodwink Jurors with the portrayal of the assembled three-way pre-arranged make, in the interest of finality...

The prosecutiio's Case-in-Chief was a charade of circular filibustering and direct inferences about my escape and the gun fight; my so-called rare 38/357 pistol; the prearranged three-way make of the so-called crime scene evidence bullets or bullet fragments and the numerous grants of immunity to the death merchants who was probably responsible for the death of Roger (Rags) Grant.

The trial curt prohibited all evidence about the underlying self-defense prsecution. However, in the interest of justice, Mr John Helvin, a recently retired Los Angeles Police Depaertment's robbery-homicide detective was called to give testimony for the ascertainment of truth. Detective Helvil was one of the three LAPD detectives who had interviewed me at the Los Angeles Police Department Headuaters, on July 11th, 1984.

Coincidently or otherwise, within a month or so of my arrest, after working 25 years as a Los Angeles City Police officer or Robbery-Homicide detective, Mr Helvin retired and started working as a Private Investigator. Having primary knowledge about the charges and also about my own prior backgrond, inspired me to request the court for the approval of his appointment as my own private-defense investigator and to work as a teem together with Mr Jerry Feinburg (himself a retired Division Commander of the Hollywood Sector of the Los Angeles Police Department) had been appointed as the private-defense invstgator for my codefendent, Marshall L Bridges (aka Khumasi L Bridges; ak Khumasi L Pruett).

Both, Khumasi and I had first exercised our right of self representation, in propria persona, without professional legal counsel.

Before retirement and while still a LAPD detective, Mr Helvin interviewed